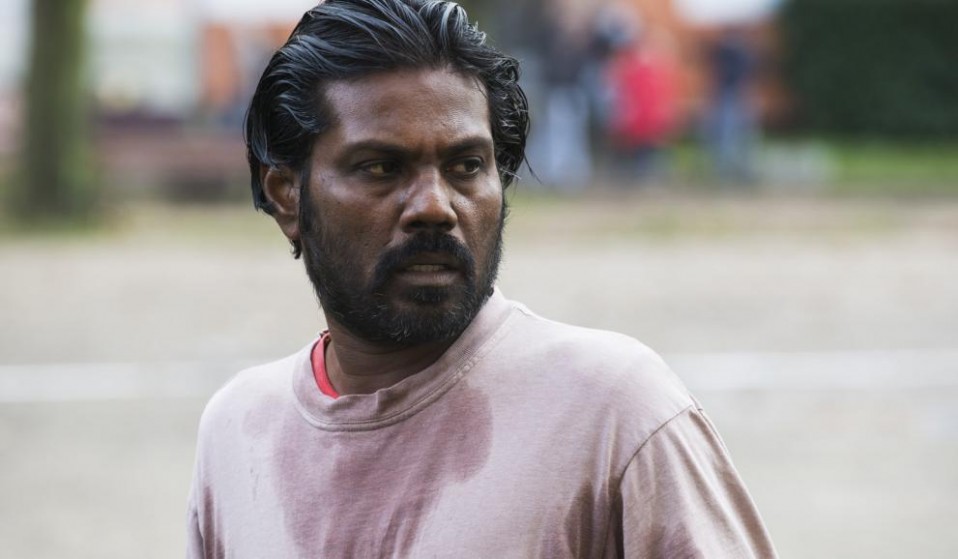 Dheepan tells the story of a man who flees to France with a fake family to try to start again after involvement in Sri Lankan conflict.

Jacques Audiard is best known for telling the watchful stories of men in knife-edge situations, whether they’re dodging the pull of the criminal world like Romain Duris in The Beat That My Heart Skipped or learning to survive in prison like Tahar Rahim in A Prophet. Dheepan begins its story with the sight of  a truck being loaded with bodies in the dusty midst of the Tamil war-zone in Sri Lanka. Shortly thereafter, a desperate woman grabs a ‘husband’ and a ‘daughter’ before making a successful plea for a new collective identity. The three are then smuggled across the water to France where they live as a family in a tenement block dominated by gang activity.

Audiard does his best work in the first hour, showing the quiet determination of his characters to make it in this new and precarious social set-up. The man, Dheepan (Jesuthasan Antonythasan), woman, Yalani (Kalieaswari Srinivasan) and child, Illayaal (Claudine Vinasithamby) are juggling past trauma with the unnatural task of getting to know each other in a demanding and intimate situation. Nicolas Jaar’s electronic score is ambient yet menacing and the actors emit guarded depth creating an atmosphere that grips.

Dheepan is given a job as a caretaker by a fixer and Yalani is sent to work for the uncle of the local gangland boss (Vincent Rottiers). Audiard avoids the temptation of making gang characters the Villains Who Ruin Everything. Indeed Yalani and Brahim drum up a tentative chemistry that shows cross-cultural respect rather than the more the more cinematically typical, vile racism. The third act is a victim of the rest of the film’s success in that it doesn’t sustain the imagination of what has gone before. The opening double stretch is so powerful that it makes Dheepan a valuable film, irrespective of its incomplete narrative state.

Linkedin
OTHER ARTICLES
As the Criminal Bar Association enters its fifth week of action, criminal barrister Russel Fraser explains why the legal professionals have walked out and how action is likely to escalate.
From the chip shops, to the bingo parlors and burlesque dancers, photographer Mike Coles remembers capturing scenes of holidaymakers by the English coast.
Photojournalist Fiora Garenzi spoke with people still living in Eastern Ukraine, an area which seen some of the heaviest fighting since the war began.
With the virus now a global health emergency, we must take steps to fight misinformation and demand a swift UK-wide vaccine roll out, writes Phil Samba.
After rewriting the indie rulebook with her devastating songs about romantic longing, the singer-songwriter is now imagining a future in which the artist is no longer a product.
A sharp increase in officers armed with the electrical weapon is resulting in serious injuries and deaths.