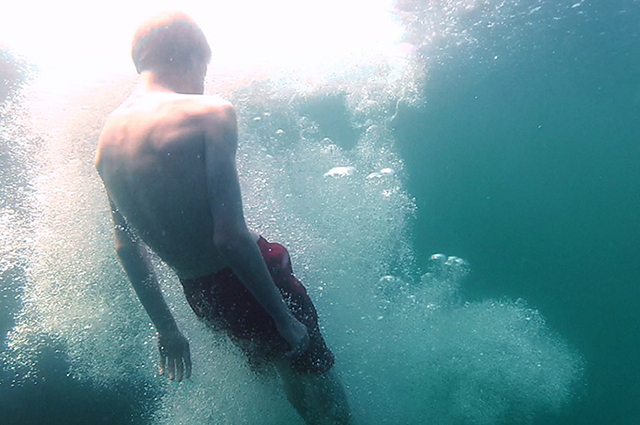 The man who captured Lake Superior in the sun-drunk Canadian coming-of-ager is a big talent.

The star of Canadian director Andrew Cividino’s debut feature, Sleeping Giant, is a lake. Cividno grew up around Lake Superior in Ontario and has said that he wanted to capture the energy of that setting. He can be satisfied on that count. While the dynamic sometimes feels contrived in this teenage boy-led tale of an unforgettable summer, the lake always pulls its weight.

Sometimes dazzling in the foreground, colours dancing like a mermaid’s tail in the sun, sometimes a dark expanse in a night-time background, it infects the mood creating a sense of drunkenness and danger. It holds the characters when they slice through on a boat leaving white tramlines or plummet down in a cocoon of bubbles after jumping from a cliff-top. It is bigger than them all, even when adolescent bickering turns into something more consequential. And although it serves as a friend, enabling chilled activities, it could kill them with total indifference.

The man responsible for capturing all of this is the Toronto-based cinematographer and Ryan Gosling lookalike, James Klopko. Do look out for his work.

Linkedin
OTHER ARTICLES
Following the release of his latest album, the rapper talks about finding a new approach to songwriting, attitudes to poverty, and why his music is more than a political statement.
A series of photos by the late Jerry Dantzic taken in 1957 show a tender side to the iconic Jazz musician.
Last week, Tower Hamlets council removed its nudity-restricting licensing conditions in a huge win for London’s kink community.
The author discusses her new memoir, which offers a sobering reflection on the racism and otherness she’s experienced along with a joyful celebration of her culinary heritage.
Steel City is often overlooked when it comes to the country's cultural radar despite its role in shaping electronic music.
A sharp increase in officers armed with the electrical weapon is resulting in serious injuries and deaths.