Art & Culture / Film / Our favourite music videos of the week 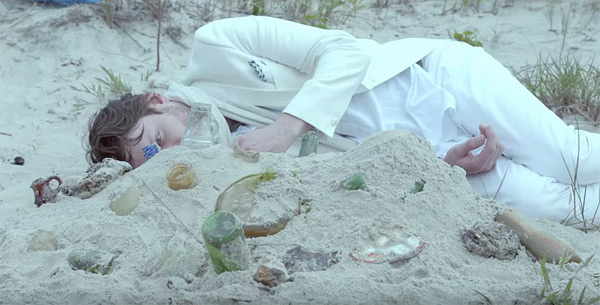 The end of the week: sometimes it feels like it’ll never arrive. Whatever mental state you’re in right now, we serve up a fine selection of great tunes and majestic visuals to ease you nicely into the weekend.

‘Gibraltar’ is the first track from Beirut’s forthcoming album, No No No. Brother Willis set it to images with a beautiful yet perplexing story that unfolds on a mysterious beach.

Tame Impala’s stonking ‘Let it Happen’ starts out innocently enough with a man in a suit rushing for his flight, before (predictably) shit gets psychedelic. There are echoes of Fight Club as our besuited “hero” finds himself hurtling towards the dark abyss of corporate hell.

Kim Gordon is not a woman you’d fuck with. In this cameo on ‘Close Up’, the first lady of post-punk puts young pretender Peaches through her paces as a hard-as-nails gym coach.

Channelling the redneck chic of cowboy hat and dungarees combo, Georgia-based Deerhunter are back with a slightly messed-up ode to serpent skin.

Boo Boo Davis – ‘If You Ain’t Never Had The Blues’

OK, so technically not a music video but  BLu ACiD’s electro-blues adaptation of Boo Boo Davis’ ‘If You Ain’t Never Had The Blues’ is a pumping soundtrack to Ian Wood’s immense street art-saturated drone flyover of some iconic spots in Los Angeles. Watch right through to the sunset shots at the end: mesmerising stuff.

One from the vaults. With the news that the British Board of Film Classification will now be slapping age ratings on music videos, we cast our minds back to some classics that would definitely not have made the censors happy. Romain Gavras’ 2008 video for Justice’s ‘Stress’ really pissed off a lot of people as it followed a group of unruly Parisian youths tearing up the banlieues.

OK, so again technically not a music video, but it has music and video… and Dam-Funk! Stones Throw records’ far-out grooves-man takes Boiler Room on a journey through his impressive record collection in the wax-filled basement of his Los Angeles home.

Linkedin
RELATED ARTICLES
OTHER ARTICLES
The subversive movements of the '60s and '70s are still a lifeline for outcast kids across America.
Huck meets the lurkers, lifers and outsiders carving an alternative Copenhagen, free from restraint in Freetown Christiania.
Featuring indoctrination, alienation and The Ramones, this is our list of the best alternative coming-of-age flicks.