Like millions of people around the world, director George Amponsah first saw the 2011 UK riots on television. But after a few days of watching London burn on the news, George decided to drive across the river from his home in Fulham to Clapham, to document the chaos for himself. With camera in hand, he passed through a police cordon and walked along the high street past the burning buildings, amazed by the surreal atmosphere and the destruction.

George knew early on he wanted to explore how the police shooting of Mark Duggan in Tottenham, the misleading information they initially released and their mishandling of events in the aftermath led to the worst urban unrest Britain has seen in a generation. But it wasn’t until a chance meeting at a party a year later that he found his entry point to the issue and the people who became the lead characters in his remarkable documentary The Hard Stop. 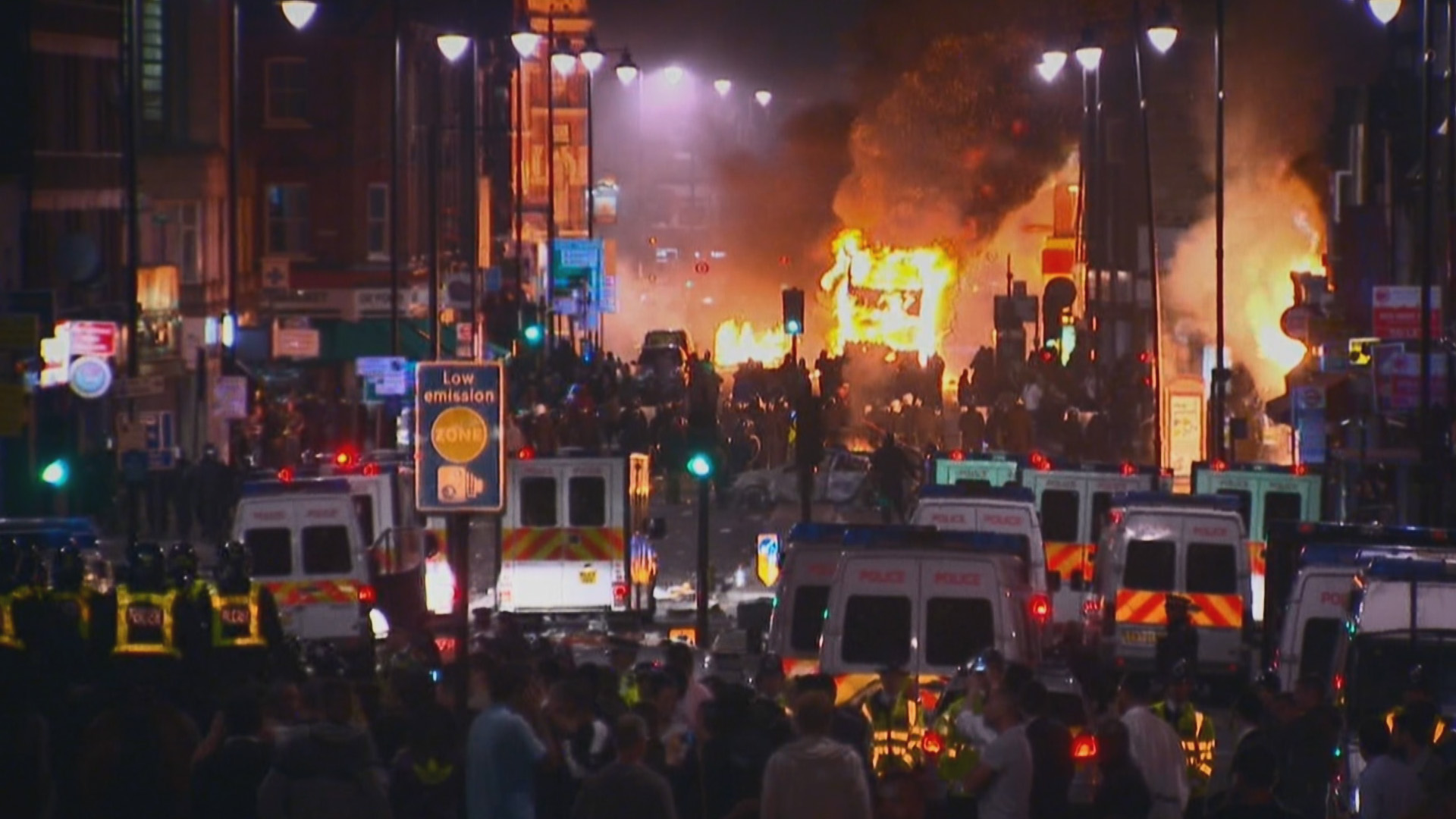 Kurtis Henville and Marcus Knox (who was charged with starting the Tottenham riot by attacking the first police car) both grew up with Mark Duggan in Tottenham, on the same Broadwater Farm estate where tensions between police and local residents have long been at boiling point. The animosity goes back decades, beyond the killing of PC Kenneth Blakelock during riots in 1985, which were themselves in response to two deaths at the hands of the police: Cynthia Jarrett, an African-Caribbean woman who died due to heart failure during a police search at her home and Dorothy ‘Cherry’ Groce, a black woman who was shot during another police search in Brixton days earlier. 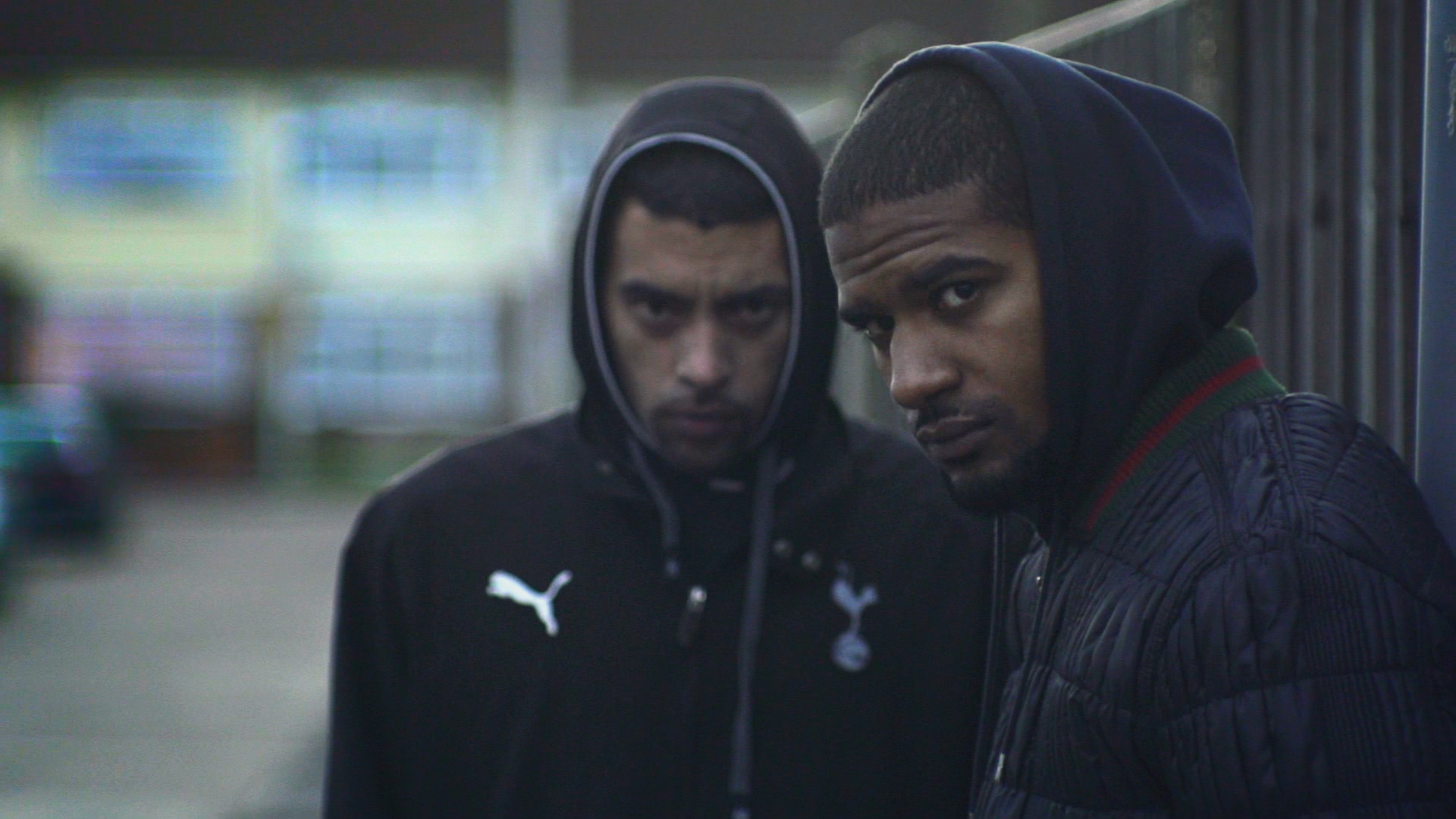 “Mark’s friends, family and the wider community in Tottenham have been suffering from this cycle of violence,” George explains. Kurtis and Marcus share a deep distrust of the police and George picks up their stories as they attempt to come to terms with Mark’s killing and join the rest of the community in fighting to find out why he was killed, despite being found to have no weapon in his hand when the police aggressively “hard stopped” his car.

As the long wait for the inquest into Mark’s death progresses, so too does Marcus’ court case. He’s held on bail while he waits to find out if he will be charged for starting the riot after the peaceful protest he helped organise outside Tottenham police station two days after the killing was ignored. Later, he starts his own mentoring project, Remarkable Start, which works with Duggan’s son and other local young people who could be at risk of making choices that put themselves and others in harm’s way. 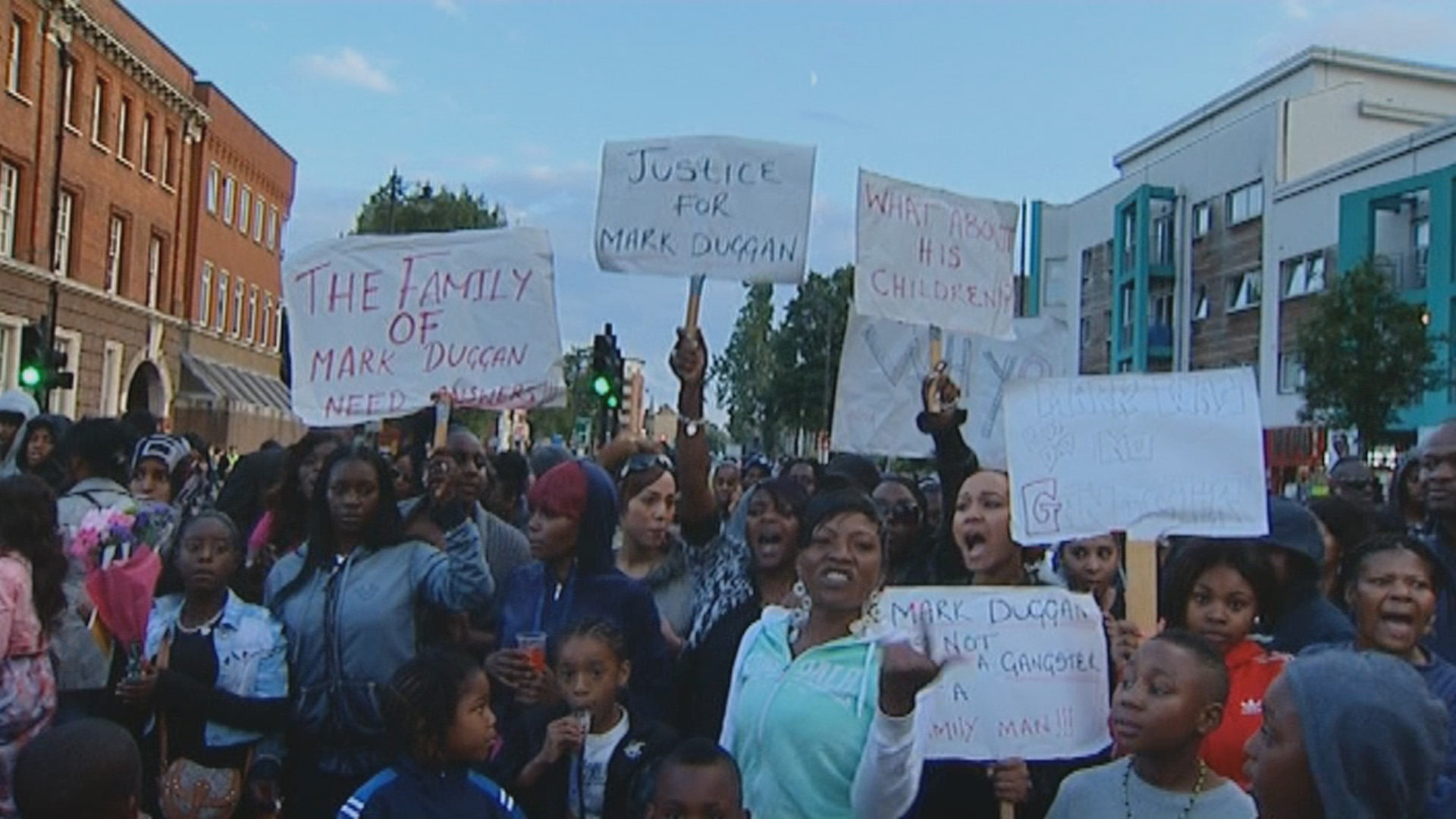 The peaceful protest in Tottenham two days Mark Duggan was killed, before the riots began

Despite many members of the community doing what they can to avoid a repeat of the violence, the police response has left many wondering if lessons have been learned. In many ways, the subsequent riots overshadowed the unjust killing of Mark Duggan. “The key here is of a community who feel their voice is not being heard,” George explains. “Who was Mark Duggan, as a man, as a friend, as a human being? There’s a feeling that was lost in the discussion as the peaceful protests against Mark’s death in Tottenham developed into riots which spread across the country. The initial issue, which was why was Mark Duggan shot when he didn’t have a gun in his hand, was lost in the mayhem. Families, friends and communities weren’t getting any answers: two days after Mark was shot, no police officer had even informed the Duggan family that their son was dead.”

Mark Duggan is far from the only victim of police violence. Since 1990 there have been over 1500 deaths following police contact in the UK and not one police officer has been convicted of wrongdoing. Another Tottenham man, Jermaine Baker, was killed by police in 2015 during an operation near Wood Green, with friends claiming he was asleep at the time. In a rare move, the officer in question was arrested, but the police still face serious questions over a lack of accountability after shootings. 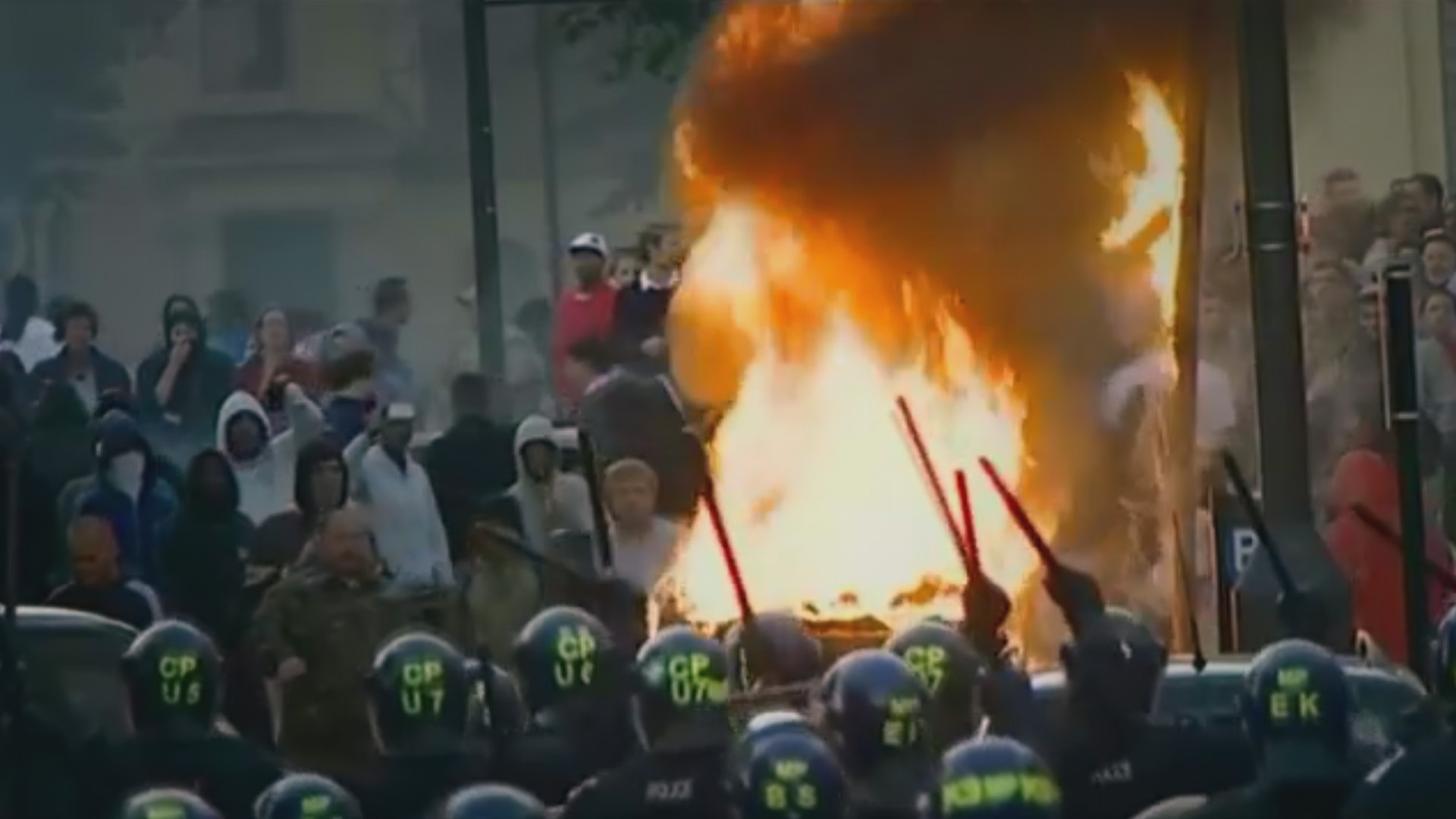 “There are over 1500 other stories just like The Hard Stop,” George explains. “But I think this one particular story, hopefully goes some way toward giving people a sense of the humanity – that we’re not talking about statistics here, we’re talking about people, human beings. They have lives and they are loved. They have families and communities around them. We have to learn that when things like this happen, even if it is actually a genuine mistake on the part of the police, then there has to be some accountability and there needs to be some effort on the part of the police to hold their hands up and say, ‘We’ve made a terrible mistake and we’ll learn a lesson from it.’”

So, from what George has seen throughout the making of the film about the relationship between the police and the communities they serve, could the riots happen again? “Yes, absolutely,” he says. “We live in troubled times. I don’t see anything has happened since 2011 to give me some feeling of reassurance that it couldn’t happen again because there are still a lot of people in our society who don’t trust the police. The same inquest jury who found that Mark Duggan definitely didn’t have a gun in his hand also ruled that the officer killed him lawfully, so that has not engendered a feeling of trust in the police. So if something like that happens again under certain circumstances, you can imagine the anger would be the same as felt in 2011, but incrementally greater because you have a new injustice on top of a previous sense of injustice.”

The Hard Stop is on tour around the UK now.

Linkedin
RELATED ARTICLES
OTHER ARTICLES
Photographer Melanie Nissen recalls capturing the characters, fashions and rarefied chaos of a rapidly-expanding set of punk bands who helped to redefine the genre.
With abuse of call-centre staff on the rise, many are now speaking out about the hostility they’ve faced.
Leading art critic Robert Storr reflects on the photographers – from Seydou Keïta, to Malick Sidibé, to Carrie Mae Weems – who helped to transform and redefine the medium.
In the UK, Hongkongers are continuing to stand in solidarity with the pro-democracy movement.
From the queues outside to the last ones standing, Francesco Mellina’s new photo book follows a night that has gone down in the Northern-Soul history books.
In 1984, Martin Shakeshaft set out to document the miner’s strike as it really happened, using his photography as a tool for activism.