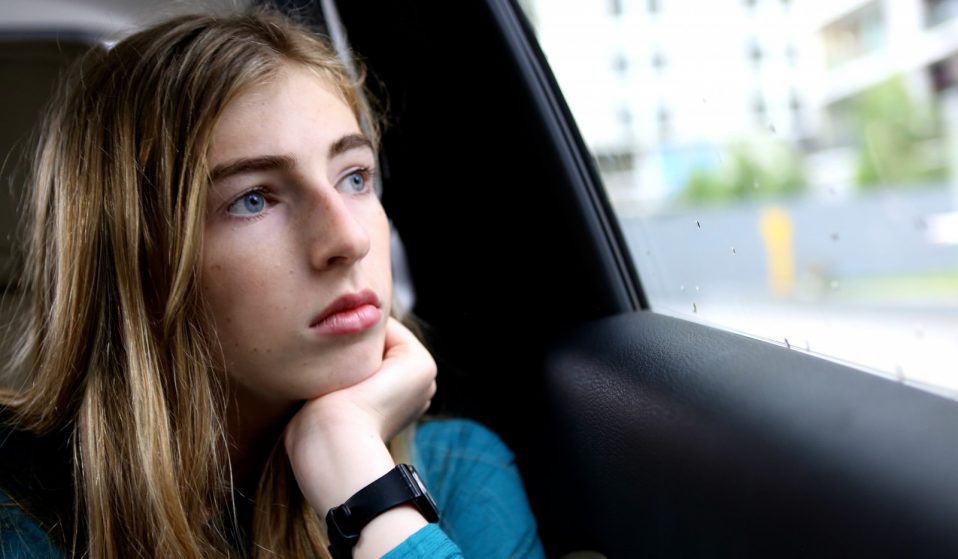 A new documentary follows the story of a teen whose battle changed the law on access to treatment for trans youth.

A new documentary follows the story of a teen whose battle changed the law on access to treatment for trans youth.

When a trans voice is given the platform to tell their story on their own terms, you listen.

Spanning 19 years, new documentary The Dreamlife of Georgie Stone provides an intimate glimpse into the life and transition of the eponymous teen. A pioneering trans activist, we are guided through Stone’s life, from home movies of her childhood, her transition and her determination to advocate for trans rights across Australia.

Coming off the back of her first feature-length documentary, Gayby Baby, director Maya Newell saw Georgie’s story as one that needed to be amplified and brought into the public consciousness. The project became a collaboration and platform for Georgie to tell her story and create her own narrative in a world that would so often dictate it for her.

Maya and Georgie sat down with Huck to discuss the film and the fight ahead.

Maya, how did you come across Georgie and her story and what prompted you to create a documentary about her journey?

Maya: I think the first thing to say is that I met Georgie a really long time ago when she was 14 and it’s been a long collaborative process, making the film together and deciding what kind of story Georgie wanted to tell. I didn’t go in with a particular idea of what the film would be but with an openness to learn more about Georgie and Transcend Australia, the partner organisation of the film. It was really beautiful coming together and this film was really an offering for Georgie to have a platform and an opportunity to speak her truth.

How did the collaboration work between both of you?

Georgie: The collaboration was built on a lot of trust and from working with Maya since I was 14. I always had the assurance that nothing would go in that I didn’t want, and that I had a say in the story that we were telling. We just wanted to tell this story in a way that hadn’t been done before and that was very vulnerable and honest and compassionate. I’ve learned a lot from  Maya and I’ve gained this deep passion for filmmaking in a way that I didn’t have before.

Georgie, how did it feel letting a whole documentary crew into your life and letting them explore and tell such a personal story for you?

Georgie: Well it wasn’t a whole documentary crew, it was just Maya following me around with a camera! It was quite easy because I got to become friends with her through the process, so after a while the camera sort of melted into the background.  When we started, there was such a lack of positive trans stories out there, it was like we had no control over our own narrative. So if I couldn’t see it I decided that there was an opportunity for me to be it for someone else. There was never a point when I felt like Maya was probing too deep or I was in a position where I felt uncomfortable because I knew that I could always say no. Maya had these really beautiful and protective instincts anyway so I never felt like I was at risk at all.

Maya: I think that it’s incredibly courageous that Georgie has decided to share her story and some of the most intimate parts of her coming of age and growing up with a very wide audience on Netflix. Everything that you see in the film has had so many deep conversations about why it’s in there and what the impacts are going to be, how trans people are going to feel when they watch it, how mainstream audiences are going to feel. What was really beautiful was just to be able to have those conversations. From really early on we decided that this film was not going to only be for cis, mainstream audiences, that needed their hands held through understanding what it was to be Georgie. It was also for trans and gender diverse and non-binary young people and older people of all generations who could latch onto the nuance and the complexity.  I think when we’re a part of minority groups we’re expected to tell everyone that we’re perfect in order to be seen as equal and that’s just not fair and so this was a really conscious choice to put all of it in and speak to all of those audiences.

On the subject of Netflix, I wanted to ask if you have any fears or concerns about it being released on such a large platform and any negative feedback you might receive?

Maya: Obviously there are very negative conversations that are happening all around the world, particularly in the UK,  so we had lots of conversations around duty of care and Georgie’s wellbeing being our number one priority. We’re really glad to be working alongside Netflix and some really amazing partners to ensure that Georgie is held throughout this period and is not standing up there alone.

Georgie: Being a trans person in this world is scary and it is dangerous because no matter what we do we are always at risk. Our very existence offends people.  I’ve reached the point in my life now where I refuse to continue to make myself smaller to placate other people and to fold to their fear. I’m not going to do that anymore.  Whenever I tell my story I feel like I’m opening a vein. You have to be very vulnerable and open yourself up to everything, love alongside hate. There is never going to be anything I do that will not make someone angry so I may as well just do what I want and that’s what I’ve decided.

Maya: I think as well, that is why we opened the film with the beautiful Laverne Cox quote about the choice to be visible and just how much of a radical idea that is when you are trans.

Georgie, could you tell us a bit about the laws that you managed to get reformed in Australia?

Georgie: There used to be a requirement in Australia for trans kids to apply to the family court to access treatment. This would be largely stage one, which is puberty blockers, and stage two which is gender-affirming hormones. My family and I had to go to court to get the permission of a judge to access that treatment. When I was ten years old I went to court for permission for puberty blockers and for consent for later down the track to access gender-affirming hormones. The court agreed for stage one but not for stage two. We appealed to the full bench of the family court in Australia on the basis that we shouldn’t have to go to court, and that no family should have to go to court to access treatment that they should be entitled to.

Maya: It might be good to say that you had doctors, you had your parents, there were so many people that were making that decision together.

Georgie: Yeah so my doctor agreed, my parents agreed, basically everyone was in agreement but that wasn’t enough. We had a partial victory so we were able to change the law so that no family or kid had to go to court to access the first stage of treatment, but we still had to go back for the second stage. We went to court for the third time and got permission for me to access gender-affirming hormones. The advocacy we undertook from there was to change the law so that kids wouldn’t have to go to court for stage two treatment and a lot of that is seen in the film. In 2017 the law was changed which means we had a win but it’s been partially walked back now for kids in more complex family situations, so the fight continues.

On that note, I also wanted to ask if there are any kind of reforms that you are fighting currently or any new laws that you are trying to get overturned or relooked at in Australia?

Georgie: Alongside the film, we’re running an impact campaign and there is more information on the website about that.

Maya: There are a number of goals that are set out by Georgie and transcend Australia, the organisation I mentioned before, and they’re based on a lot of research as to what is important to trans families all around Australia. Some of the legislative changes include increasing the amount of gender-affirming services across Australia, increasing funding to family support organisations that do so much of the work before or around the actual medical affirmation. The other goal of the dreamlife project is to uplift and amplify the voices and diversity of trans young people and their experiences. We’re also making a zine, by trans young people, for trans young people which can be found on the website.

What are you hoping the impact of this film is and what message do you want the audience to receive?

Georgie: I think just on a very broad level, I want people to see how important it is that a trans kid has support around them. The support that I’ve received from my two wonderful parents, from my doctors and from being able to access gender-affirming care, court aside, has meant that I’ve been able to live my life authentically and as myself. That’s what we all really want and deserve, to have the opportunity to live our dream lives. For trans people watching I hope that even though my experience is my experience, they can see a little bit of themselves in my story. We need more hopeful, strength-based stories for trans people. I want to see stories out there that give me hope and that don’t depress me or tell me that my life is going to be tragic.

The Dreamlife of Georgie Stone is available on Netflix now.

Linkedin
RELATED ARTICLES
OTHER ARTICLES
A new exhibition shows a different side to the enigmatic pop artist, away from the Factory and immersed in the natural world.
In his 2008 series, the photographer pictured himself as Angela Davis, Martin Luther King Jr., Malcolm X, and other prominent figures.
Following the death of the monarch, a 12-day period of mourning began in Britain. Photographer Julian Zerressen was there to capture the surreal scenes unfolding in London.
By turning a real-life crisis into daytime television fodder, TV bosses have once again shown themselves to be completely out of touch with audiences.
A new documentary follows the story of a teen whose battle changed the law on access to treatment for trans youth.
Photographer David Corio’s archive offers a glimpse inside a revolutionary era of music and nightlife.