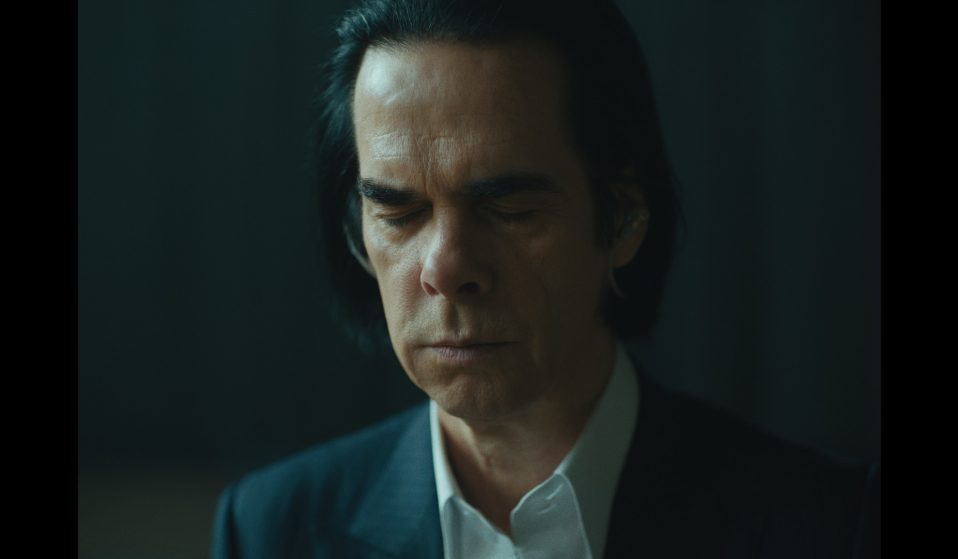 Photography © Still from ‘This Much I Know To Be True’

The director discusses his new documentary exploring Cave’s relationship with fellow Bad Seed Ellis and the musician’s recovery from grief.

The director discusses his new documentary exploring Cave’s relationship with fellow Bad Seed Ellis and the musician’s recovery from grief.

In 2016, Andrew Dominik – director of Chopper, The Assassination of Jesse James by the Coward Robert Ford, and the upcoming Marilyn Monroe biopic Blonde – released the documentary One More Time With Feeling. It captured musician Nick Cave in what Dominik describes as “the midst of a shattering” after the loss of his 15-year-old son, Arthur. The film was a powerful, often devastating, depiction of grief and an artist trying to navigate returning to making music, as well as his sense of self.

Six years down the line, Dominik has turned the cameras on Cave again, but the result is a very different film. This Much I Know To Be True is more rooted in performance; it’s ostensibly a concert film without an audience. It focuses exclusively on material from Nick Cave and the Bad Seeds’s Ghosteen, along with recent album Carnage made in collaboration with fellow Bad Seed, Warren Ellis. These slow, atmospheric songs make for an intimate and tender film, but also one peppered with moments of humour, joy and exuberance.

The film captures a creative period between Cave and Ellis; their deepening relationship acting as a backdrop to many of the non-performance moments. It shows their shared love for one another, as well as the huge shift that has taken place in their songwriting process over the years.

It also finds Cave in a contented and reflective mood, often with his head behind a computer screen as he reads the thousands of fan questions he gets sent via his website, The Red Hand Files. (Named after his 1994 song, Red Right Hand, the site allows Cave’s fans to submit open questions which the singer then answers in written replies that are posted online.) After the film screened at this year’s CPH:DOX in Copenhagen, Huck caught up with Dominik to talk about the documentary.

You went into making One More Time With Feeling with no real idea of how it was going to unfold. Was it any different this time around?

Nick just wanted to make a film about him and Warren, because they were sitting around bored during Covid. I didn’t really know what the movie was going to be like, but I knew the records. I knew Ghosteen really well, and that’s the reason I did it because I love the songs. I wanted to make a concert film if I could get away with it and I guess there was a desire on my part to show where Nick was.

What you see in this film is somebody who has integrated the loss of Arthur into his life. He’s a very different person from the person in One More Time With Feeling. He’s learned stuff he wants to pass on, as I think stuff was passed on to him in the immediate aftermath of Arthur’s death.

What’s your connection to some of these songs? You’ve got a mixing credit on Ghosteen.

I was living with Nick in LA when they were recording Ghosteen. So I could sort of see what was going on. He’d playback songs on the computer and would sing lyrics over the top and be like: ‘what do you think of this?’ sitting in the kitchen. It was amazing to be around because they operate in this space where, it’s hard to explain, but they will be working up some music and Nick will be singing lyrics over the top of it, and you can’t tell whether it’s good or bad – you really can’t. It happens in this very vulnerable space. That’s the area where they like to live.

Is Nick a good housemate? Does he do the washing up?

He’s better than I am. I was going through a breakup at the time and he sort of took me in and looked after me like a little baby bird and fed me three times a day. He’s wonderful.

Can it be tough directing people who are friends? Do you have to adopt a different role?

I’m just a different person when I’m directing. I’m like a bull. And they’re just kind of used to it. The thing about these movies is they’re done so quickly, there’s no preparation, you just sort of turn up two weeks before you’re about to shoot them and you’ve got to come up with what the fuck you’re gonna do. It’s a bit like being a mountain climber without a rope, you just sort of go into a flow state and trust your instincts and hope for the best. There’s a certain amount of animalistic moving forward that you need to do in order to get it done. 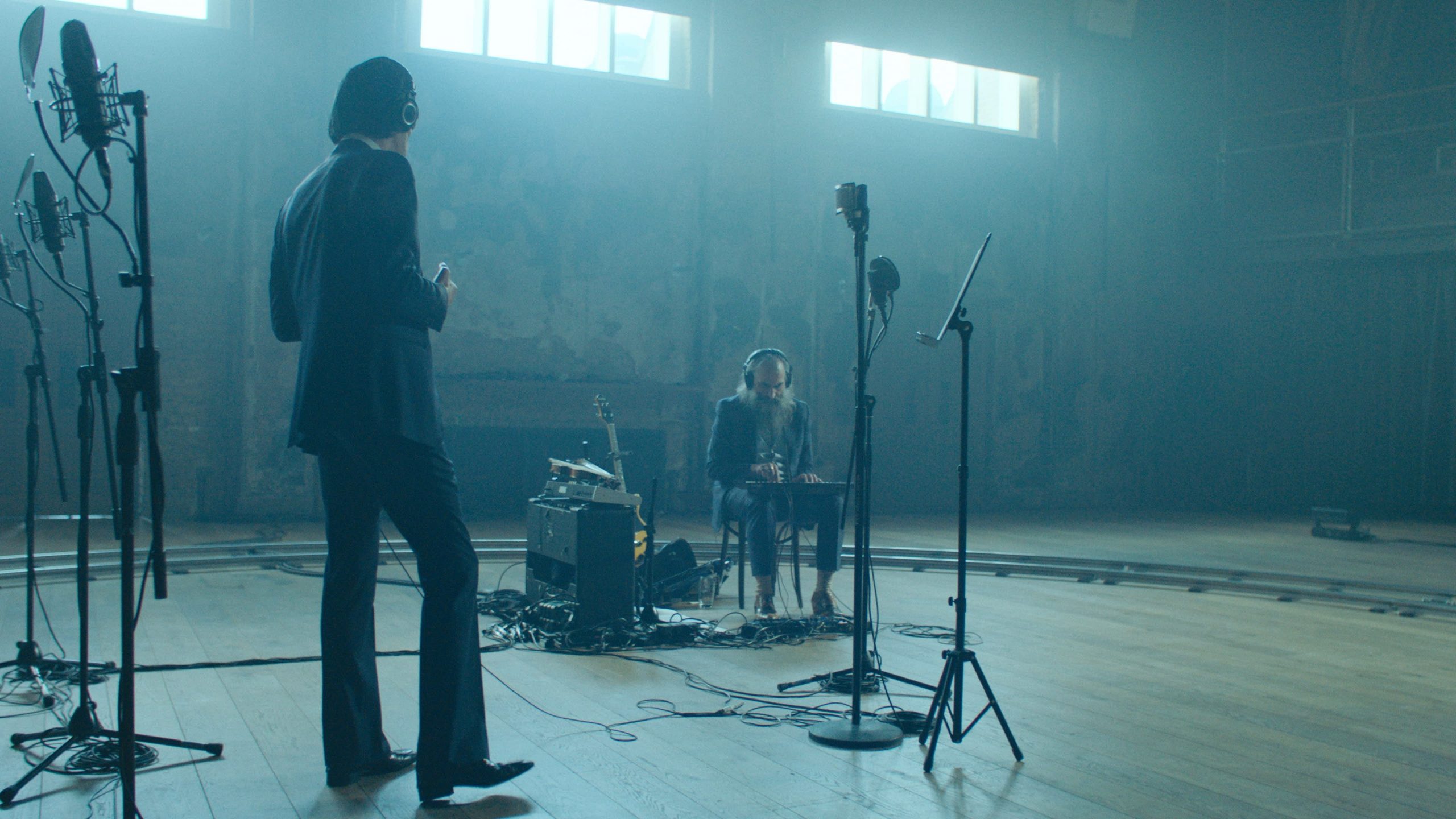 One More Time With Feeling was in 3D and black and white; did you have a strong visual identity in mind for this film?

I’ve lived with the music for a long time and with each song, I wanted to highlight something about it visually. I pre-programmed all the lighting for each song, so the movie is very in sync with the music. It was a fucking nightmare to organise and get done in five days.

Nick and Warren’s relationship underpins much of the film. Has that evolved a great deal over the years that you’ve seen up close?

This collaboration with Warren got them into a new way of making music and I think that’s what they’re always trying to do. They’re trying to come up with a way of making music where the music is surprising them the same way that it surprises the listener. They’re able to go through that experience themselves. It’s sort of hilarious to watch, because it’s really all about Warren, and Nick trying to get Warren’s attention.

There’s this great piece of music in Blonde [Cave and Ellis worked on the music for Blonde], with Warren singing this sort of operatic stuff into a vocoder. There’s also this very striking piano that goes along with it from Nick. I told them I love this piece of music and Nick was like, ‘yeah, he was driving me fucking nuts with the vocoder and I was just trying to get his attention by hitting the keys so hard’. You can really hear their relationship in the music. 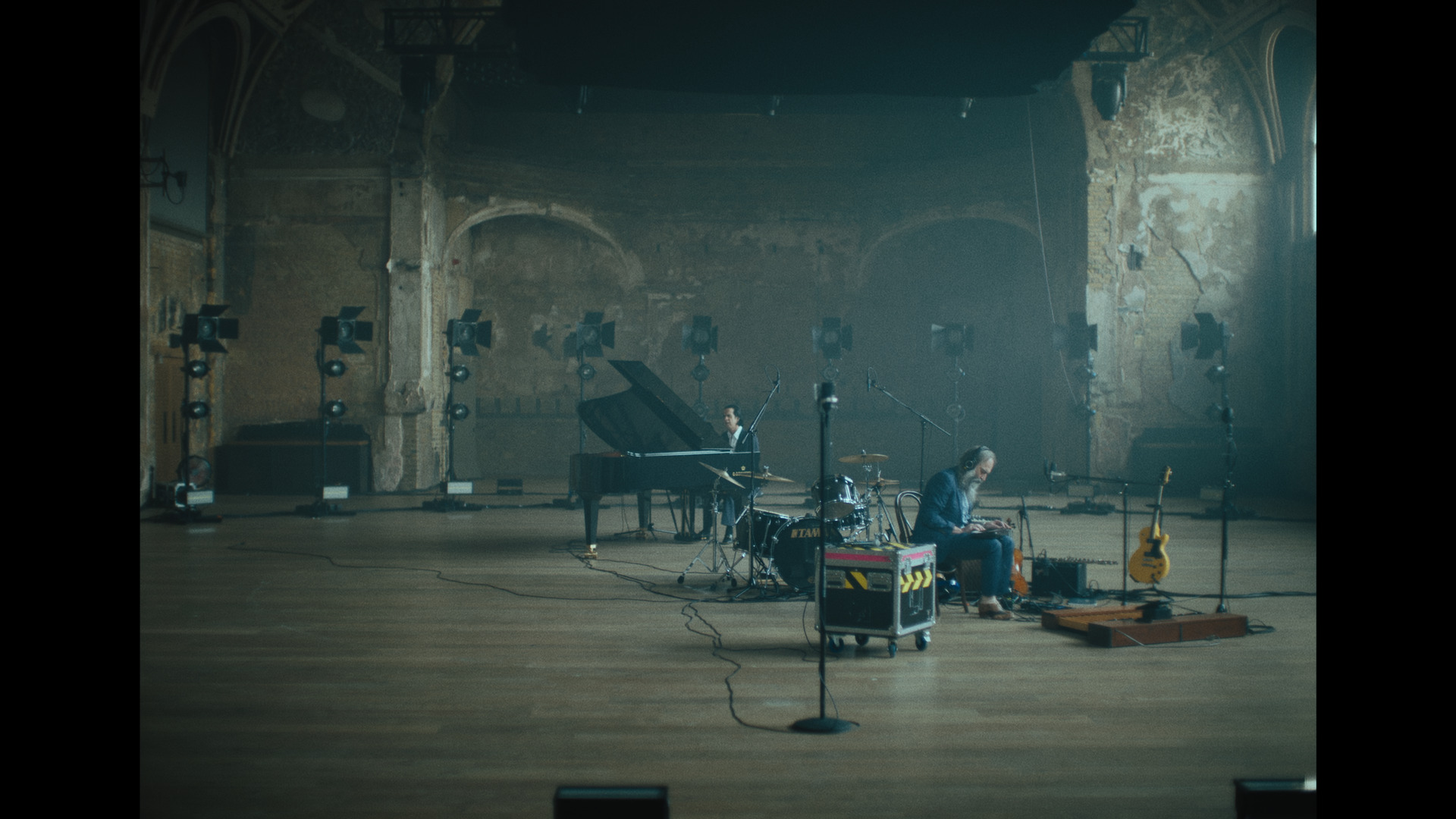 They seem to have a very harmonious relationship on screen but do they ever fall out or bicker?

You see it in the film that Nick has the odd dig because Warren is the bane of Nick’s life. Nick turns up with these beautiful songs and Warren’s just not interested, he’s playing his music and if you can fit your lyrics in, then well done. But I think Nick loves that because something incredible happens. They do complain about each other to me but it’s usually pretty affectionate. And it’s usually about pretty minor things but, largely, no, they fucking adore each other.

The Red Hand Files also feature in the film. Do you get a sense of just how important these have been to Nick and his recovery?

The thing about the Red Hand Files is he has to answer the questions he’s asked in the most responsible way. It’s incumbent on him to do that. In having to do that he’s bringing his own mind to heal. He’s not allowing those kinds of negative thoughts to gain ground. He’s forcing himself to think responsibly, and that is bringing his mind to heel like a dog.

I think it’s really good for him. It was interesting, in that same period of time where I was living with him and he was working on Ghosteen, he wasn’t that interested in Ghosteen. He was much more interested in the Red Hand Files. He would get a question and the whole week would be about responding to that one question.

To me, it seemed like the Red Hand Files were incredibly important to his recovery. He gets what he has by giving it away. What’s been amazing about watching Nick is that he has tried to try to make the most meaning out of that loss, to lose in the best way you can. That’s because of the responsibility he has for the other people that he loves that are around him. He’s going to take it the best way that he can. It’s also the best way to honour Arthur – not wanting his family to sit around feeling miserable for the rest of their life. He wants them to recover.

This Much I Know To Be True is in cinemas for one night only on 11 May.

Posted Tuesday 26th April, 2022
Text by Daniel Dylan Wray
Photography © Still from ‘This Much I Know To Be True’

Linkedin
RELATED ARTICLES
OTHER ARTICLES
Birdy Chu reflects on documenting the historic moment in which the territory was formally passed back from the UK to China.
In his 2008 series, the photographer pictured himself as Angela Davis, Martin Luther King Jr., Malcolm X, and other prominent figures.
The idea that a younger generation is abandoning work has become a popular narrative online, but it doesn’t necessarily reflect reality.
Sean Maung’s photos are a love letter to the Black and brown communities that make up New York.
A 37-year-old woman shares how her abortion led her to become a clinic worker, and the abuse she’s received in that role.
Yesterday thousands gathered outside Buckingham Palace after news of the Queen’s death broke.