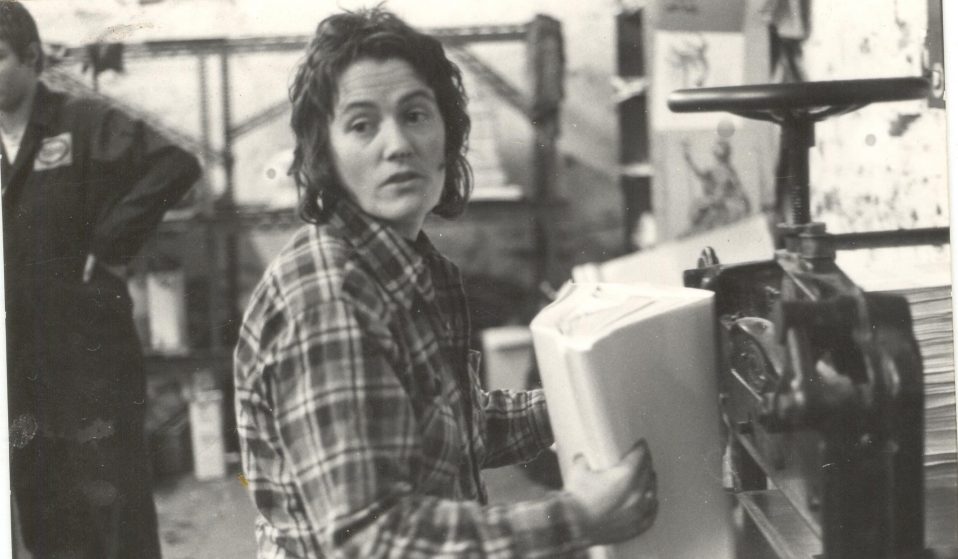 Angela Cooper and Luchia Fitzgerald transformed the lives of thousands of women – yet no record of their activism exists. However, a new documentary is changing that.

Together, Angela Cooper and Luchia Fitzgerald transformed the lives of thousands of women – yet no record of their activism exists. Now, a new documentary is shining a light on their incredible story.

“How could you sit on your arse your whole life and not get on the streets and fight?” declares Luchia Fitzgerald, speaking at the beginning of new documentary Invisible Women.

As the co-founder of the Manchester branch of the Gay Liberation Front (GLF), Luchia’s life and work serves as the subject of the aforementioned film, which explores the untold story of two LGBTQ+ revolutionaries. Together with her former partner Angela Cooper, the pair helped change the face of the city forever, transforming thousands of lives in the process.

After meeting in a pub in 1969, Angela and Luchia would go on to play a pivotal role in Manchester’s women’s liberation movement. They opened the city’s first women’s refuge, started a rock band, and launched a radical queer printing press. But in Manchester Central Library, there is no record of their activism on file.

With Invisible Women, however, their story is finally being written into history. Speaking to Huck together via email, the pair explain that they agreed to participate in the documentary “to create a true record for future generations, of ‘her-story.’” 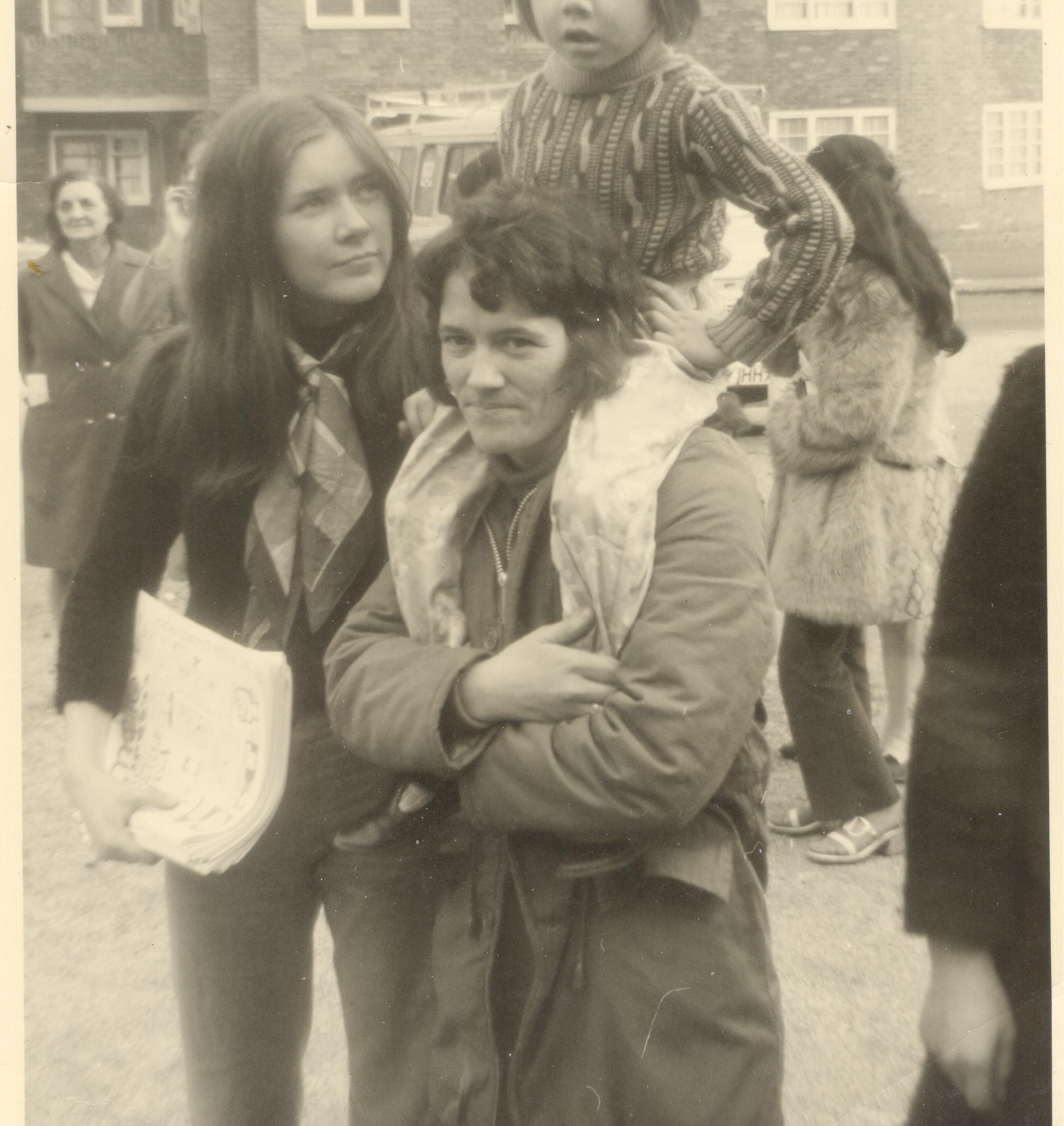 Last year saw an outpouring of TV exploring LGBTQ+ lives, in response to the 50th anniversary of the partial decriminalisation of homosexuality in the UK. Yet these films focused mostly on white, middle class, London-based gay men. Producer Joe Ingham worked on the BBC’s Prejudice and Pride series, where he briefly met Angela and Luchia, but felt that these documentaries largely ignored women.

“The way [broadcasters] tried to spin these series was that it was all about the men, when in actual fact the GLF would never have happened if it were not for the involvement of women,” he explains. “[They have] done a hell of a lot of stuff, but it’s never been recorded.”

“Luchia is a fantastic storyteller. She’s just led this incredible life and I felt that her story needed to be told.”

As a teenager, Luchia ran away from Ireland after being rejected by her family. Upon arriving in Britain, she was arrested and sent for a lobotomy – a form of brain surgery that attempted to ‘cure’ homosexuals – but managed to escape to the streets of Manchester.

Back then, life was particularly difficult for the LGBTQ+ community. Queer bashings, blackmail, discrimination, homelessness, mental health issues – as well as the threat of aversion therapy, and lobotomies – made life particularly bleak. When the pair met, Angela was already a member of the women’s movement, but, together with Luchia, she decided to take those ideas of liberation into Manchester’s gay scene. 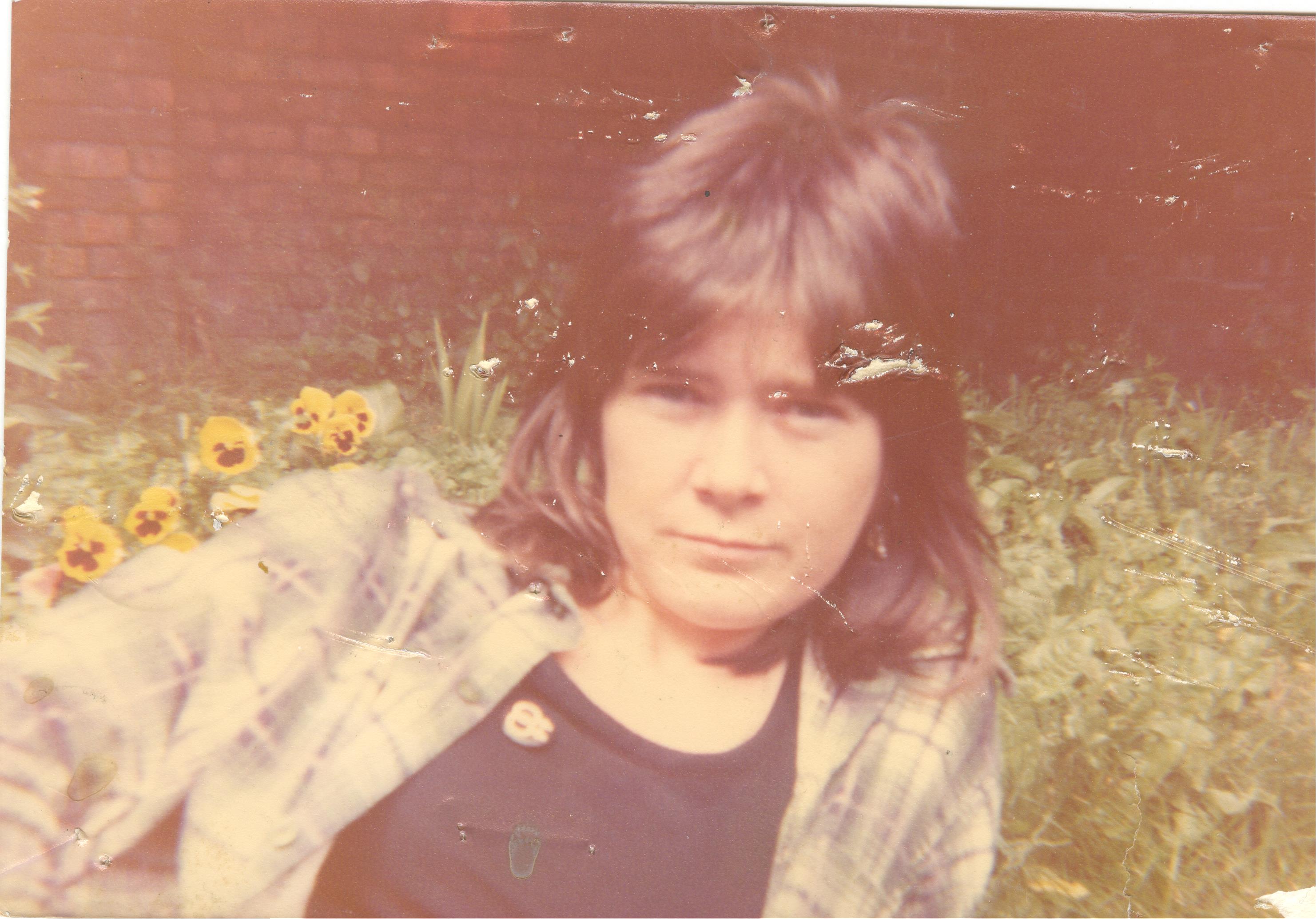 Responding to the hostility they faced in both general society and from within the LGBTQ+ community, (“which was a ghetto, and pretty unfriendly to lesbians in particular”) Angela and Luchia set up the Manchester branch of the GLF. “It was saying: ‘Fuck You. We’re here and we’re queer and we’re not going anywhere.’”

At the time, there was little support available for women – no Rape Crisis, no Women’s Line. In response, they set up a phone line for those in need of help, advertising the service with posters across Manchester. Several women responded seeking refuge, so the GLF decided to squat in an unoccupied house. “We had an advice line, did pregnancy testing, and then the police heard about us and started bringing women and children to us who had nowhere else to go.”

Thanks to the kind donation of a local solicitor, the GLF bought the house and turned it into a women’s refuge – only the second to be set up in the country at the time. It remains there to this day, along with several other centres across the city, although recent funding cuts have resulted in its future looking increasingly at risk.

While they were working to improve the lives of LGBTQ+ women in the city, Angela and Luchia were both in their 20s, which meant – in their own words – lots of “sex, drugs, and rock and roll.” Joe initially came across Luchia after reading a blog about queer rock bands in the 70s. The band toured across the country, culminating in a now-infamous show in Glasgow. Luchia took off her top mid-performance, with the 1,700 crowd following suit. It was a defiant statement against their oppressors and, from what Angela and Luchia recall, an electric and inspiring performance.

On top of that, the duo also oversaw the GLF’s operation of a radical queer printing press. They printed pamphlets, leaflets, posters, independently publishing their own material and making their voices heard in the local community. “We wanted to be visible,” they say. “After hiding our sexuality all our lives it was great fun! We felt like outlaws, outside the system, with nothing to lose.” 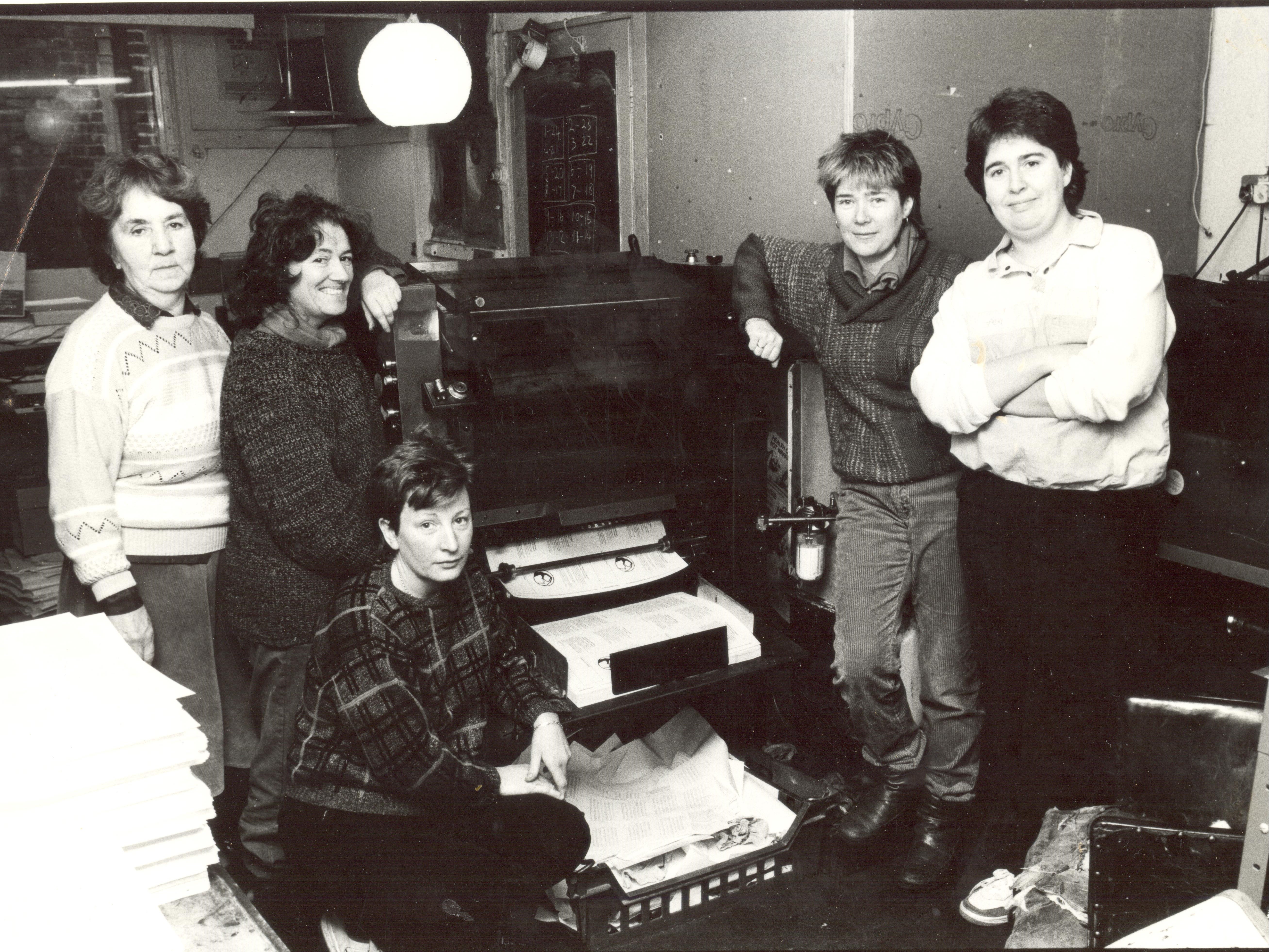 The couple were in a non-monogamous relationship and expressed their politics in ways that were radical for the time. The GLF first made headlines after painting ‘lesbians are everywhere’ across Manchester. They also organised ‘happenings’, where groups of women would go to straight pubs in groups. “The girls would then start kissing and cuddling to shock the drinkers – and then we ran like hell!”

Eventually, the romantic relationship between Angela and Luchia fell apart. But, after the profound effect they’d had on one another’s lives, they were never out of contact. Luchia was the first lesbian that Angela had ever met which, she explains, allowed her to be herself “for the first time”. Luchia adds that, through meeting Angela, she found a new life. “I was introduced to ideas of liberation and fighting for your rights – and I never looked back.”

Today, they live around the corner from each other in Manchester and speak most days. “We are each other’s chosen family. Like most LGBTQ+ people, we had to find our own families.”

While researching for the project, director Alice Smith explains that it quickly became obvious that Angela and Luchia’s story wasn’t the only one out there. “We went round some houses at the beginning [of the shoot] and realised this could be a much larger social history,” says Smith. “There’s just a wealth of amazing stories out there from incredible women and they need to be told.” Inspired by working on Invisible Women, Angela has started an oral history project, which aims to record other invisible women and tell their ‘her-stories’.

Though Invisible Women primarily deals with Angela and Luchia’s activism in the ’70s and ’80s, it also highlights how they are both still fighting for women and LGBTQ+ people today. Both are giving talks at screenings of the film about their past work, as well as “the need for activism now.”

And, by the end of the film, it’s clear that Luchia is just as politically motivated now as she’s ever been. “I believe with every bone in my body that if there’s something that needs doing let’s get it done,” she says, resolutely. “So I’m never done. No, the fight never stops. It really doesn’t. It never stops.” 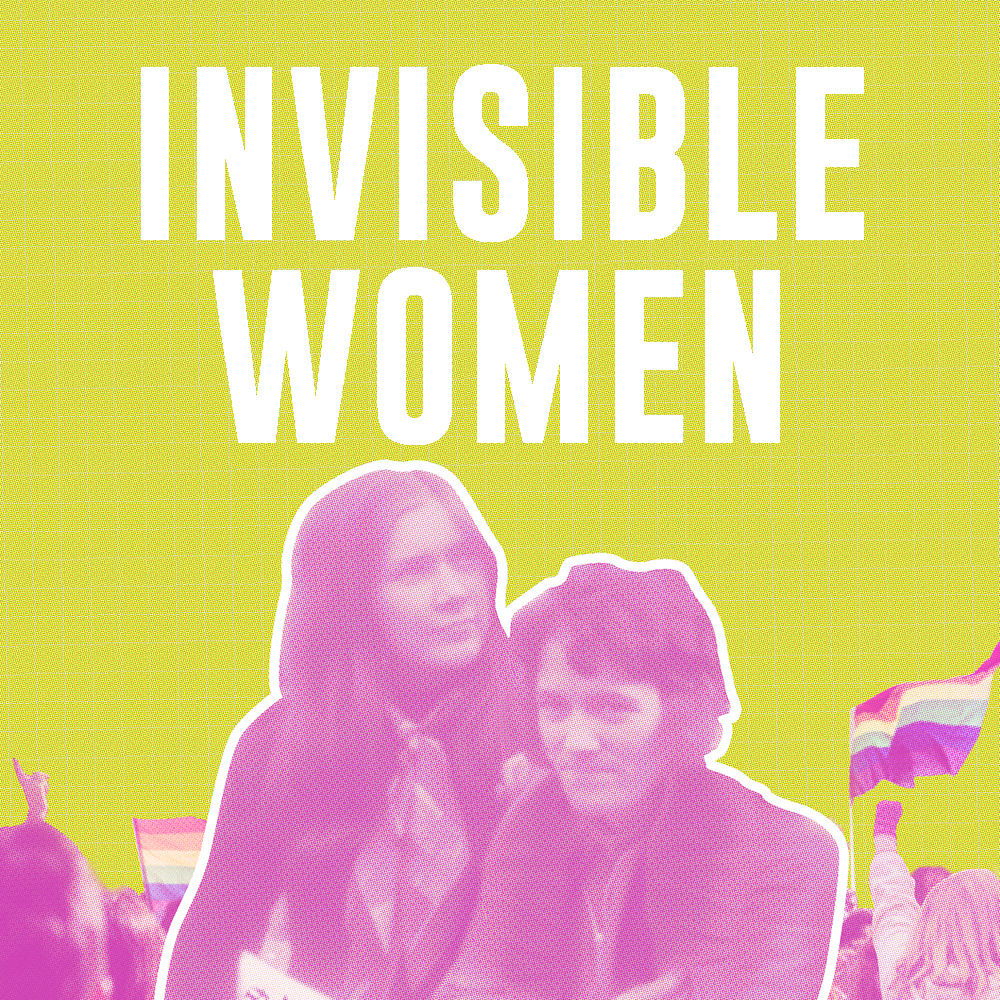 Invisible Women is touring Liverpool, Manchester, Leeds, and London before screening at Harvard in the US. The film is also available to buy.

Linkedin
RELATED ARTICLES
OTHER ARTICLES
In his 2008 series, the photographer pictured himself as Angela Davis, Martin Luther King Jr., Malcolm X, and other prominent figures.
A group of young Palestinians have found temporary freedom in the act of parkour, reimagining wreckage and ruins as a series of high-octane playgrounds.
Rogue landlords are exploiting young and inexperienced renters and leaving them in mental and financial turmoil, reports Niall Hignett.
Birdy Chu reflects on documenting the historic moment in which the territory was formally passed back from the UK to China.
A new project is documenting formerly incarcerated people as they transition back into civilian life.
Financial turmoil is pushing people who work in the sex industry into more dangerous and desperate situations as a means of survival.