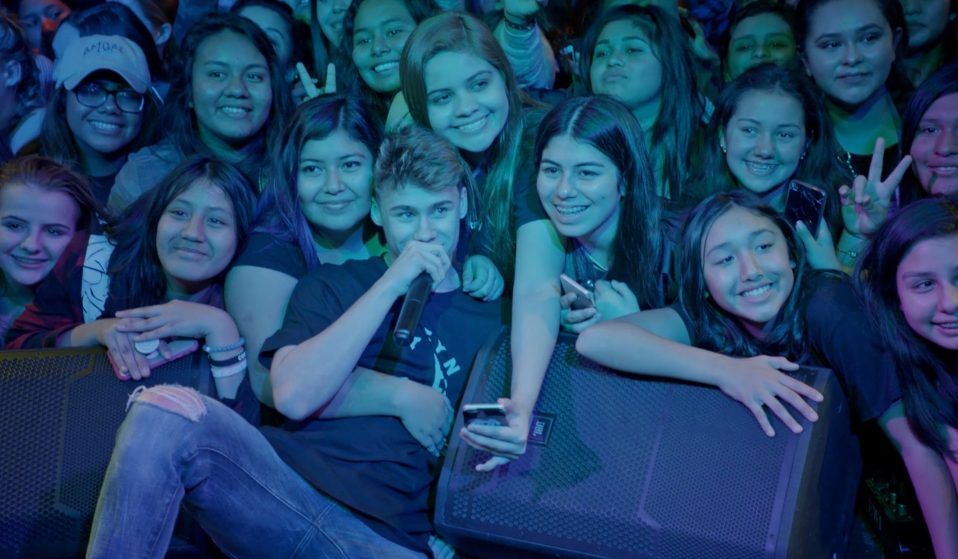 Liza Mandelup’s new documentary, Jawline, follows 16-year-old Austyn as he tries to carve out a career as an influencer and escape his hometown of Kingsport, Tennessee.

Liza Mandelup’s new documentary, Jawline, follows 16-year-old Austyn as he tries to carve out a career as an influencer and escape his hometown of Kingsport, Tennessee.

“I’m going to fake it till I make it!” says Jawline’s Austyn Tester, with wide-eyed conviction. A dreamy, intimate look at social media’s teenage ‘meet and greet’ communities, Liza Mandelup’s documentary Jawline centres on 16-year-old Austyn as he attempts to build a social media following that he can use to leverage himself out of his family home in Kingsport, Tennessee.

Four years in the making, the film juxtaposes Austyn’s trajectory against that of the more established Bryce Hall and Mikey Baron, who are managed by the cartoonish Michael Weist. “Most kids can’t call up Marni, the COO of Instagram. It took me years to get those connections,” Michael says, as he sits at a desk in an LA mansion, surrounded by old McDonald’s wrappers (he’s 19).

In Jawline, for which she won the US Documentary Special Jury Award for Emerging Filmmaker at this year’s Sundance Film Festival, Mandelup presents a world that’s nearly without adults. “You could make a film about the world of older managers and how they scout these boys and what they do to them, and that might be weird,” she says. “But what was interesting to me was there’s a teenage world run by teenagers, for teenagers, and they’re working, there’s an economy, they’re getting paid by each other. It’s its own little ecosystem.”

Ahead of the documentary’s Hulu release on the 25th August, Huck spoke with Mandelup over the phone to discuss social media, fandom and teenage agency.

How did the project start, what led you to make the film?
I had been thinking about what it must be like to be a teenager today: how just experiencing life and emotions are so different, when so much of what you experience is through a screen. I wanted to tell a story about what love and connection was like for teenagers, so I started doing research and I found the world of meet and greets. Once I found the world of meet and greets things just kind of took off.

So when you started researching meet and greets, how did Austin come out of that?
I was travelling on tour, filming with different guys, filming with girls, before I had what I felt was a main character. I knew I needed someone who was very excited to be entering the world, that they needed this, that it was like life or death for them. And I wanted to follow someone at the very start of the journey: I almost wanted to discover someone like a talent manager would.

The film gives a fascinating insight into young men’s lives: their insecurities, their awkwardness, and how they can have dreams in this quite naive way.
Yeah and also what they’re willing to do. I kind of always felt like the girls were in control in this world, even though they seem like there’s a lot of insecurity there, and they come off very needy. But I think that they’re in control, because they’re ultimately the ones who decide who stays and who goes. 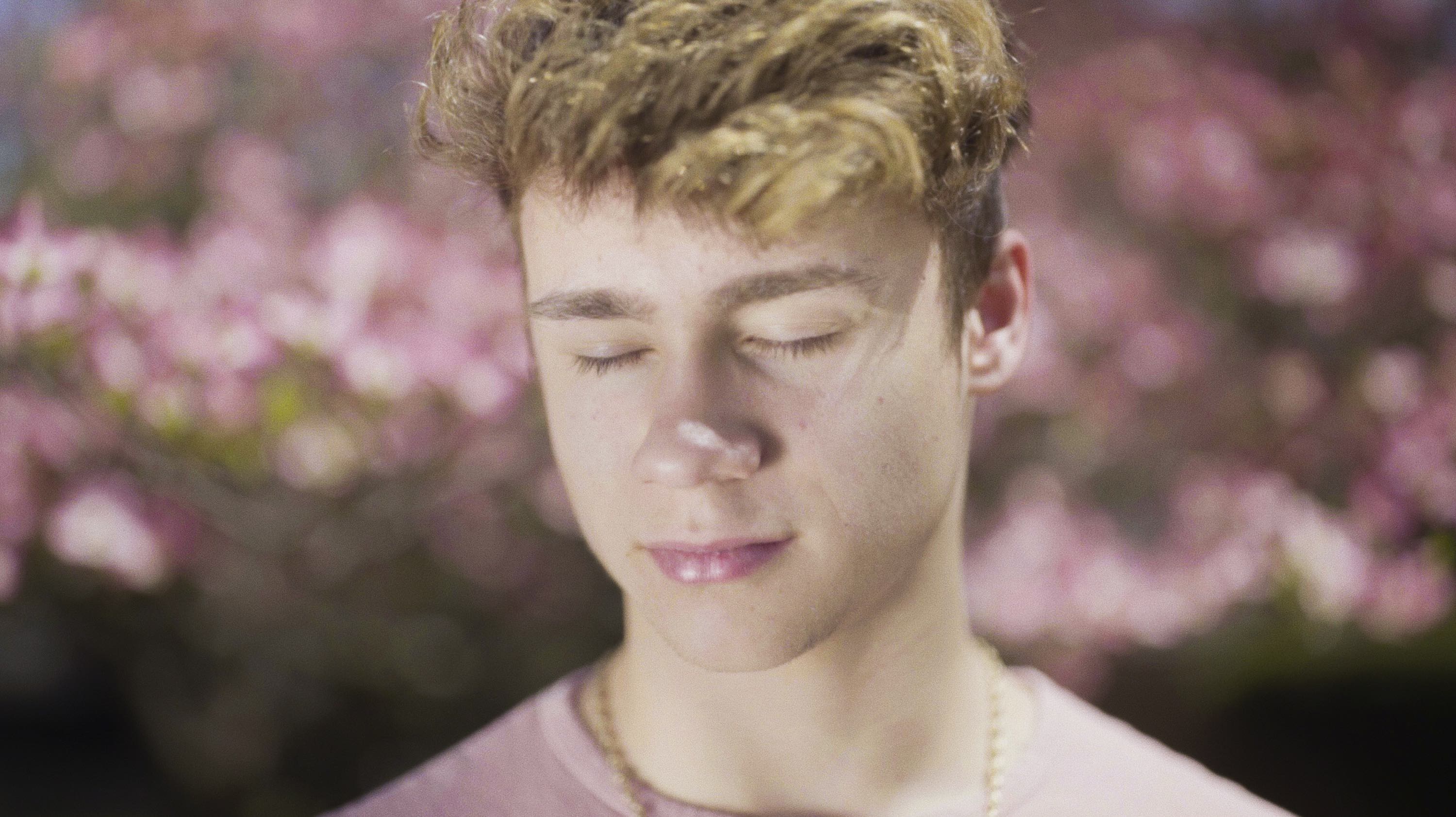 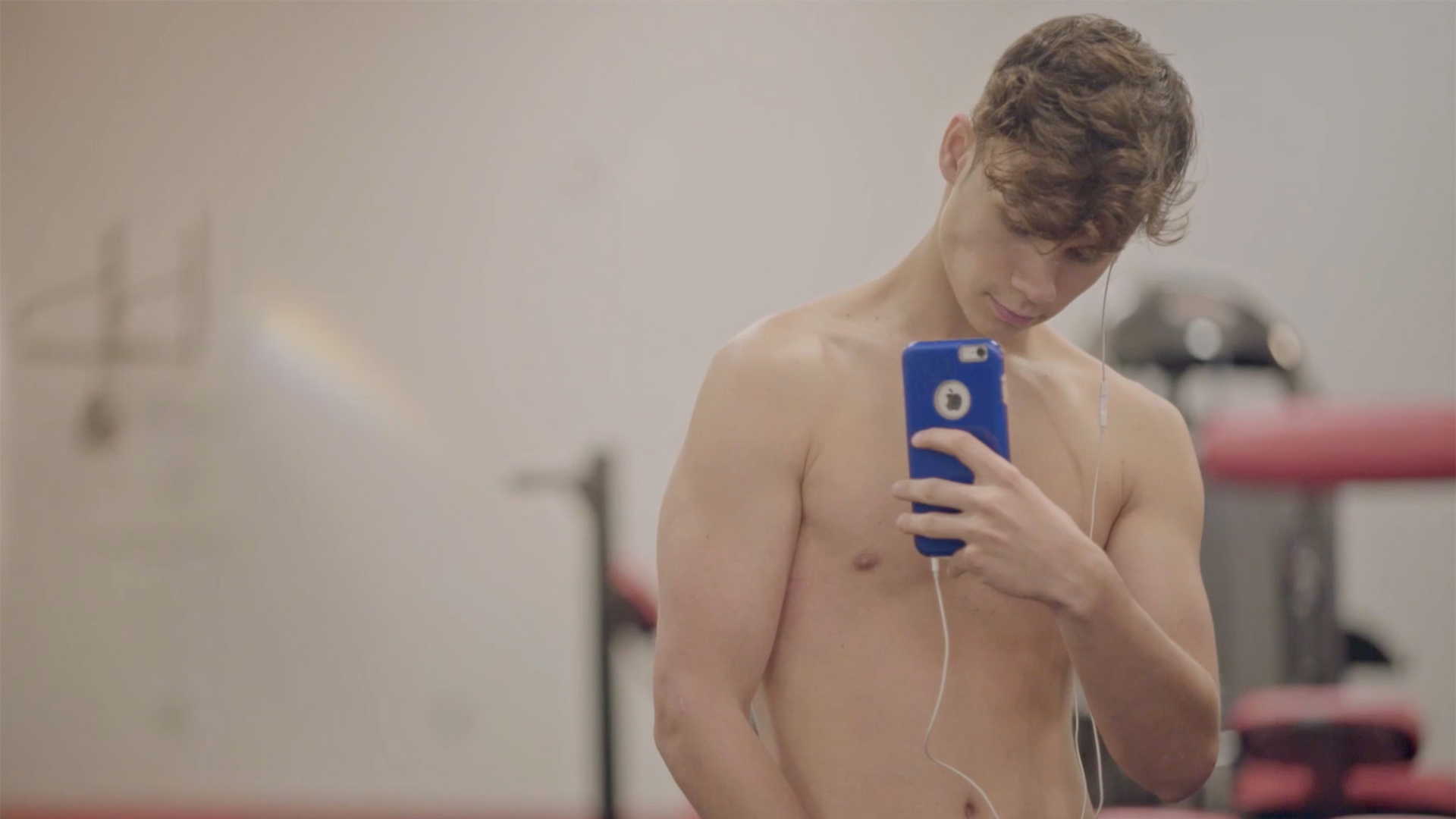 Completely. The scene in the shopping mall where the group of girls end up paying Austin to ride on the toy horse.
Exactly! The guys know that the girls are the ones that choose how many fans they have, and their whole world is based on building fan accounts. Their job is fan engagement. So I think in the film, the boys are the object of desire.

I just don’t know how long-lived it all is. I kind of feel like it’s a glitch. Social media got set up, and it gave people really direct access to their fans. This subculture – which is now a mainstream subculture – has discovered that they can get access to many fans without the talent. It’s like a byproduct of social media being set up for celebrities to have direct access to fans.

There’s something about this story which captures something very universal about being a teenager, as well as this particular modern phenomenon.
There’s a built-in arc to being a teenager, it’s a fleeting moment in time. You’ll never be that version of yourself again: you’re so vulnerable, you wear your emotions on your sleeve and you don’t know exactly who you are yet, so you’re on this journey to figure it out. I’m really interested in the idea of how people are getting by in life, how are you emotionally surviving, and that’s the thing I’m drawn to with whatever kind of film I’m making. With teenagers, it’s definitely a whole landscape.

Yeah. It’s so transient, and everything is so heightened. What you do in this small period of time could mean you become X or Y, or you don’t, and it’s all going to end in a really quick timeframe.
It feels so dramatic. That’s what I remember feeling as a teenager: everything is so extreme and it feels so life or death. As you get older things calm down, and you understand you have autonomy and all these things, but I think that you don’t really understand the concept as a kid. You’re also just so powerless, that’s a feeling I remember being so strong for me as a kid.

Jawline will be streaming on Hulu from August 25.

Linkedin
RELATED ARTICLES
OTHER ARTICLES
Following the success of her debut novel, the Tottenham native is restating her commitment to the place that made her.
Following the release of his newly republished 1991 book, Redheads, the American photographer reflects on his celebration of ginger people and their magnetic power.
The situation in Afghanistan remains dire, with many groups facing persecution at the hands of the Taliban.
After news broke last week around an expected reversal of the 1973 landmark law that made abortion legal in the US, protestors gathered in the UK in support of American women.
Members of the collective share some of their reasons to run as part of #UnitedBySummits, a campaign that looks to uncover transformative power of the outdoors.
Following the release of his latest album God Don’t Make Mistakes, the rapper talks horror villains, police brutality and being unafraid to show his vulnerable side.