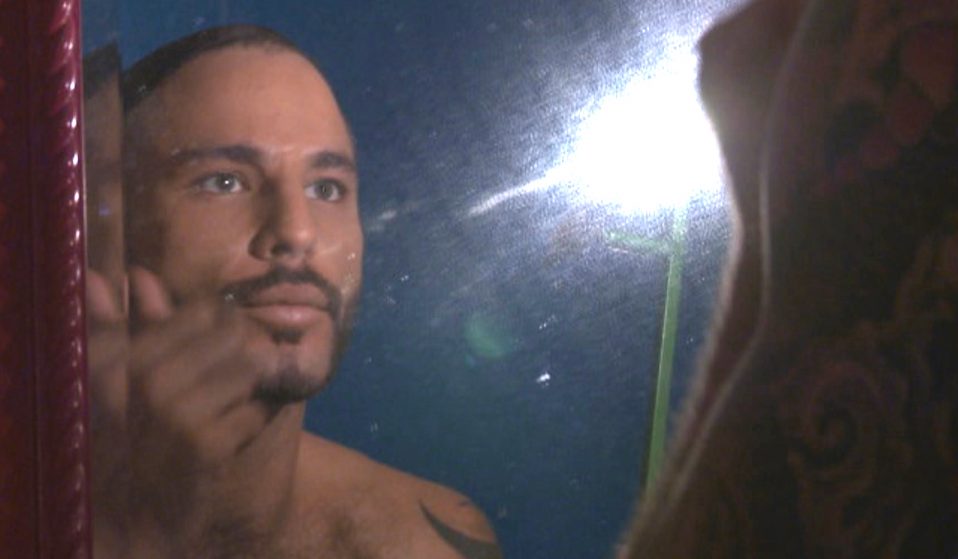 In his mid-to-late 30s, whilst filming a documentary during a hot summer parade in Tel Aviv, director Tomer Heymann spotted two men kissing in the middle of the thronging crowd. Thinking he recognised one of them from a bar he’d been at several months earlier, he turned to a friend and asked who they were looking at. Incredulous, his friend joked, “Come on, Tomer? You don’t know that’s Jonathan Agassi? You’ve never masturbated over him?” Despite his protestations to the contrary, as one of the world’s most successful gay porn stars, Tomer’s story about a late-night bar sighting seemed like a prudish fiction.

Captivated, and intent on speaking to Agassi, Tomer sent him a message on Facebook and arranged to meet at Jonathan’s hotel when he was next in Tel Aviv. Breathless and excited about the prospect of meeting his next subject, Tomer arrived at Jonathan’s hotel room to be greeted by a man wearing nothing more than a “very tiny towel, very, very small, covering just his penis.” Side-stepping questions about his sexual fantasies, if he preferred top or bottom, and whether he intended to pay in dollars or shekels, Tomer eventually convinced Agassi that, no, he really did just want to make a documentary about his life. From there, having secured the approval of Jonathan’s mother, Anna, Tomer began work on Jonathan Agassi Saved My Life – a film that was more than eight years in the making.

What results is a fascinating story, and a truly tender portrait of an industry that’s so often demonised. An international porn icon, Jonathan Agassi, has had a meteoric rise to fame, but at what personal cost? Tomer’s film sensitively explores the tension between professional success and personal loss in a way that’s never once prurient or judgemental. It’s a moving examination of loneliness, addiction and trauma that deserves to be seen. Ahead of the film’s centrepiece screening at this year’s BFI Flare, we spoke to Heymman to find out more about what to expect from one of the hottest docs of the year.

You filmed this over eight years. Did you form a close bond with the family during that time?
For sure! This film is so much about trust and friendship. I went through so many feelings, I got so involved, financially, emotionally, in so many crises. I can’t separate Anna and Jonathan from myself, they’re really deep in my heart. It wasn’t just a case of making a movie over a couple of months and then you go your own way. It’s in my blood. We went through very intense highs and lows together. Depression, happiness, fears, worries, and through it all, love. Even though the movie is quite dark, I hope the film conveys the love I have for Jonathan and Anna, and the love they have for one another.

When you form such a close bond like that, and you’re documenting a downfall or a difficult part of someone’s life, did you ever struggle to know where your role as documentary maker ended, and your role as friend began?
From the beginning, I told Anna and Jonathan that they will decide the limits of this movie, they will decide how far we go. Jonathan told me shoot, all the time. When he came to the editing room he really pushed me to include hard things in the movie. When I first witnessed the drug issues, the emotional mess, I was really shocked; but honestly, after 100 times, when I saw it on a daily basis, I realised it was just part of the movie. I was filming someone who has these addictions. Not sharing that with the audience would have been hypocritical. It really shook me, but you come to realise this is an important aspect of Jonathan’s life, he is someone who has this self-destructive impulse. I was worried for him, I wanted to protect him. But at the same time, I didn’t want to make a fake movie about successful porn stars. I tried to balance my commitments to Jonathan and to the film.

Who do you think Jonathan Agassi is saving? Is it himself? His mother?
That’s a big question for the audience and for myself. To a certain point, Jonathan Agassi is this persona who saved him from being a lonely, beaten up, miserable child. He had a very hard life in this macho society, being someone who was very feminine. It saved him for a couple of years. But as the movie progresses it asks, is this jail or freedom? I don’t think we answer that, I don’t know if we can. Jonathan Agassi offers freedom – it’s something big to discover your sexuality and to take joy from it: he loves sex, he enjoys it, he makes money from it, he takes his mother to Mykonos, he’s strong. But it’s also a prison – sex everywhere, anywhere, with anyone, with two, with five, with 10 people. It also asks questions about how we think about sex as we get older: how should we think about people who buy sex? Is that good? Is that bad? The movie tries to come from a place of no judgement. I’m not God, I’m not a judgemental director operating from a position of moral authority. I want to give people access to a life that’s normally underground.

Jonathan Agassi Saved My Life screens at the BFI Flare this March.

Linkedin
RELATED ARTICLES
OTHER ARTICLES
Rhiannon Adam spent three months capturing an ageing society wracked by division, isolation, and the aftermath of scandal.
Birdy Chu reflects on documenting the historic moment in which the territory was formally passed back from the UK to China.
Photographer David Corio’s archive offers a glimpse inside a revolutionary era of music and nightlife.
The workforce is now gearing up for industrial action after receiving a measly pay rise, reports Ella Glover.
By turning a real-life crisis into daytime television fodder, TV bosses have once again shown themselves to be completely out of touch with audiences.
The two-day long event returned to London this year, showcasing a spectacular parade, steel bands and Caribbean food.