Nick Broomfield on the Tales of the Grim Sleeper: Linking racism to the deaths of over 100 LA women.

Nick Broomfield on the Tales of the Grim Sleeper: Linking racism to the deaths of over 100 LA women.

Nick Broomfield’s Tales of the Grim Sleeper asks how Los Angeles serial killer Lonnie Franklin Jr. was able to kill over 100 women in a 25 year period without seriously being investigated by the LAPD. The film argues this could never have happened in white, affluent Beverley Hills, but Franklin killed where it didn’t count: in crime-ridden South Central. His victims were black street prostitutes whose deaths barely registered on the authorities’ radar.

Broomfield initially sets out to make a whodunit murder mystery in his signature gonzo style, but the film develops into a portrait of South Central Los Angeles; a mainly African-American community devastated by the loss of industry, the arrival of crack cocaine and its abandonment by the rest of the city. Broomfield discovers the use of police code NHI or ‘no human involved’ to refer to the deaths of prostitutes, drug addicts and gang members. This attitude helps to explain why the police missed – or in some cases threw away – significant pieces of evidence and failed to interview key witnesses.

In the end, Franklin was only caught by accident, when his son was arrested and his DNA was found to be a close match to that found on the victims. Despite evidence of their multiple failings, the police chose to bask in the glory of catching a notorious killer, but Broomfield’s film leaves you with a sense that the community are still offered little protection by a force whose racism and complacency allowed Franklin’s crimes to go undetected for so long.

How did you hear about the story and what attracted you about it?
When Ronald Reagan came into power and cut all the federal funding, the relationship between South Central Los Angeles and the rest of LA completely ceased. It’s like two cities. It’s really an apartheid system based on race, with completely different life expectancy, different obesity rates, death rates, expectations and everything.

When I heard this story about all these murders over such a long time I thought this is the only part of LA where this could have happened. This would have never happened in Beverly Hills or Santa Monica. This could have only happened South Central because no one really cares about the people.

Initially, I thought it was going to be a film much more to do with Lonnie Franklin but then the police and the authorities were so defensive and embarrassed about the situation that I made a film which is really a portrait of that community.

“Nick Broomfield returns with his best film in a decade” – read the Little White Lies review.

Could you explain what the chilling term NHI means?
The police have a lot of slang terms that they radio in when they find murders or whatever. NHI basically means no human involved. They used that for the death of prostitutes, drug addicts, gang members. It means they’re put on the back burner and not given a priority. No one really puts themselves out. Often the bodies don’t even get named, they’re just tagged John Doe or Jane Doe. One of the problems at the moment is that so much evidence was thrown away because they didn’t care about the cases. There were bullet casings and clothing thrown out, for example.

It’s a racist term too because it tends to be used with black people, which kind of goes to the heart of much of what the LAPD is about. For years and years under Chief Daryl Gates it was a sort of white paramilitary force. Very small, but extremely military in its organisation. It had no contact with the community. So what happened in South Central Los Angeles is very emblematic of what happened in Ferguson and New York and all those other police murders. It’s basically the same story, but in a way, writ large because I think in that 25 years, up to 200 women disappeared. It’s kind of like a mini-genocide.

Do the attitudes that allowed Lonnie to keep killing for so long still exist within the LAPD?
One of the things I found most chilling was when his son Christopher says a lot of Lonnie’s friends in law enforcement came up to him and shook his hand. From the very beginning of the film a lot of people came up to me and said the police are behind a lot of the killings. I’m not a conspiracy theorist at all and I’d just brush it off. But the longer I worked on the film and the more I discovered, I think it’s not at all unlikely that police just turned a blind eye and kind of just let it continue. They certainly didn’t bust their balls to find out anything about it.

After we screened the film to the police task force, I asked the lead detective why they hadn’t interviewed people like Jerry, who told me he knew half of the women on the police’s victim profile. His answer was that even if we had, he never would have told us what he told you, which is so limp for a lead detective to say.

I still think they don’t really care about finding what happened to those women, because they’ve now got their suspect and they’re just busily shoving more and more homicides in the direction of Lonnie because it means they don’t really have to account for them.

That’s an attitude you really wouldn’t expect in the white areas of Los Angeles. It goes back to the days of slavery and the whole history of black people coming to LA and only being able to live in certain parts of the city. That’s what attracted me, it’s such a big story about so much of what has happened in America in the last 200 years, which you get a sense of through this community in South Central. 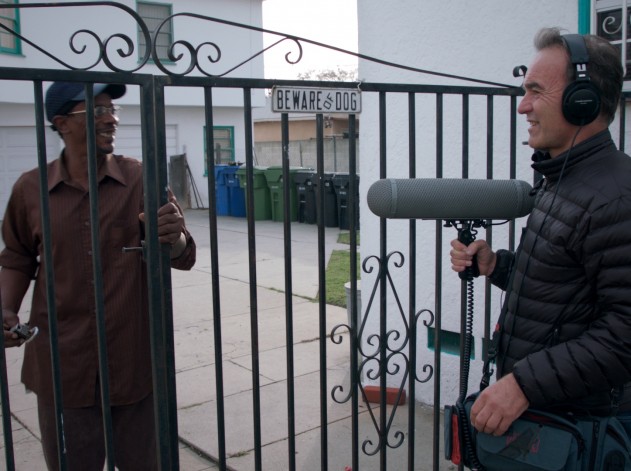 There’s been a lot of talk recently about how the LAPD improved community relations and reformed their tactics. Have you noticed any real change?
I don’t think there has been a substantial change and I don’t think the police feel – even though they are operating in South Central – that they are accountable to those people. They feel they are accountable to the white, tax paying members of the community and they feel that their time is wasted in South Central. They’re constantly arresting the same people, they’re dealing with pretty much a criminal culture. That’s obviously to do with the poverty, lack of work and the fact that half the community have felony convictions for minor drug offences which excludes them from work and public housing. It’s a big, systemic problem and the police are just part of it.

The authorities just stonewall you during the film. Did you get any sense they were genuinely embarrassed about letting the community down? Was there any soul-searching?
I think they wanted to celebrate their moment of glory for having arrested Lonnie Franklin. They don’t want to go on a soul-search to work out how this was possible to happen, so they don’t really want anyone asking those questions. They don’t want the victims families to do interviews and they’ve intimidated them by saying that if you do interviews the trial will be delayed even further and could be thrown out of court. It’s complete bollocks because none of them are material witnesses and don’t have any effect at all. The police are on a kind of whitewash campaign. They don’t want what the film raises raised. They just want to get a conviction and then it all goes away.

“No one really cares about the people in South Central.”

Was there any point during making the film that you believed Lonnie was innocent?
I think right at the beginning I had my doubts and it was interesting that his friends were adamant that he was innocent. It certainly made me think. When his friends started coming forward and started changing what they’d said, those doubts all moved away and it became a story about how was it possible that this could have happened. Is there some deeper story here, does this reflect some other agenda?

There are odd things in the case that are really kind of fascinating. For example, there’s more than one person’s DNA on a lot of the victims. The voice telling people what to do in Lonnie’s explicit home video collection is mainly not Lonnie’s. I think there’s so much DNA evidence that when you get to the bottom of it, it’ll be amazing if he gets off, but I think his story is still an interesting one.

In your previous films you’ve often played up this image of the bumbling Brit to get past people’s defences. Did you recognise your white privilege while making this film and were you able make use of it?
There were times when we got pulled over for doing stuff and the police were all friendly. The people with us in the car said, ‘Shit, if you hadn’t been here we’d all have been lying on the ground with our arms and legs spread-eagled.’ As a white person you’re pretty damn safe in South Central. You’re not going to get shot. If you shoot a white person people know they would just throw the keys away, they’re in there for life. Whereas they can shoot each other and they’re not going to get into terrible trouble – it won’t be taken seriously. But shoot a white person in South Central and the whole place would be closed down. There were a couple of members of the crew who were really petrified about being there and that was one of the things I told them: you’re not going to get shot here buddy.

The things is, most of the people in South Central were just delighted and honoured to tell their story, and they’re great people. I think one of the things that comes out of the film is how remarkable the people are. Even showing the film to my friends who live in LA, who are on the whole more open-minded than most people, they hadn’t been to South Central. They were amazed to see these people and what kind of great people they were. Which I think was one of the pleasures of making the film.

Read the review at our sister publication Little White Lies.

Tales of the Grim Sleeper is in UK cinemas from January 30.

Linkedin
RELATED ARTICLES
OTHER ARTICLES
Campaigners reflect on what the supreme court’s decision to allow buffer zones in NI means for the future of reproductive rights in the UK.
Yohon Tatum, aka Legendary Father of the House of Tisci, reflects on nurturing a new generation of talent.
A group of aid workers face prison for helping to save people fleeing their homes at sea. If they are charged, it will have a chilling effect on humanitarian efforts.
The pro skateboarder withdrew from the 2020 Olympic Games so he could come out as trans. Now, he’s hoping to encourage others to live as their authentic selves – within the sport and beyond.
Activists and campaigners are fighting back against new laws that would seriously undermine the ability to take industrial action, calling it an attack on fundamental workers' rights.
After blocking the Scottish government’s gender recognition reform bill, Westminster is now devising further changes to the law to make it harder for trans people to self-identify.