Paul Refsdal lived alongside Jhabat al-Nusra ‘martyrdom seekers’ in Syria to understand what motivates them in his challenging documentary Dugma: The Button.

Director Paul Refsdal lived alongside Jhabat al-Nusra’s ‘martyrdom seekers’ in Syria to understand what motivates them in his hard-hitting documentary Dugma: The Button.

Two Jhabat al-Nusra militant fighters are awkwardly trying to clamber into the back of a homemade armoured truck somewhere near the frontline in Syria. When Abu Qaswara al Maki, a middle class Saudi from Mecca, eventually makes it on board, he explains that the improvised explosives are designed to shoot fire through the front of the driver’s cab as well as sideways, inflicting maximum damage on the enemy and “sending them all to hell.” Then he climbs into the cab, flicking on each of the safety switches, before he pauses at the ‘dugma’, the final button that will detonate the entire truck, martyring him and sending him to paradise.

Abu Qaswara is one of two Jhabat al-Nusra fighters we meet in Paul Refsdal’s hard-hitting documentary Dugma: The Button, who have signed up for “martyrdom” or suicide operations – driving trucks filled with explosives towards enemy positions to break through their defences. Refsdal’s film provides an intimate glimpse into the lives of Abu Qaswara and British-born Abu Basir al-Britani, as the two men prepare to willingly sacrifice their lives to advance jihad in Syria. 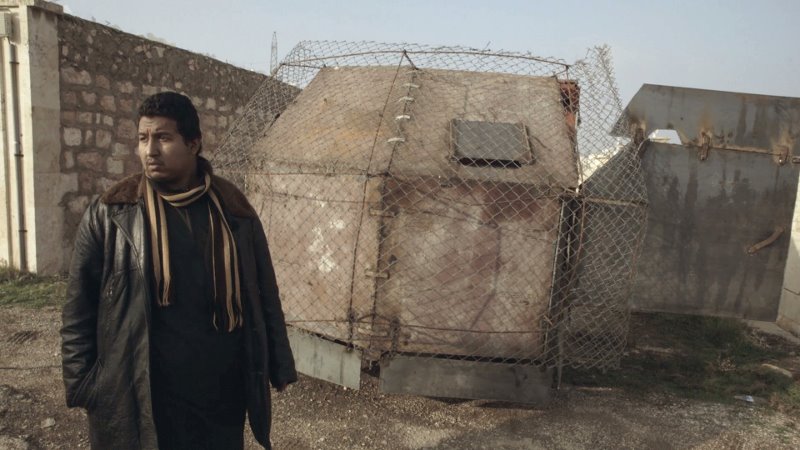 Abu Qaswara in front of an improvised armored suicide truck.

“I wanted to show the point of view of the enemy,” Refsdal explains. “That’s my big passion.” Since his first film, shot in 1985 with the Mujihadeen during the Soviet-Afghan war, Refsdal has been going to the frontline in an attempt to humanise enemy combatants. After Afghanistan, he filmed with Tamil separatists and guerrilla groups in Latin-America, such as the Shining Path in Peru before embedding with the Kosovo Liberation Army.

The remarkable access he managed to obtain, going behind the lines with former Syrian branch of al-Qaeda, is thanks in part to his previous film, Taliban: Behind the Masks (2010). After gaining their approval, Refsdal was able to spend six weeks alongside the Jhabat al-Nusra fighters on the battlefield near Aleppo. 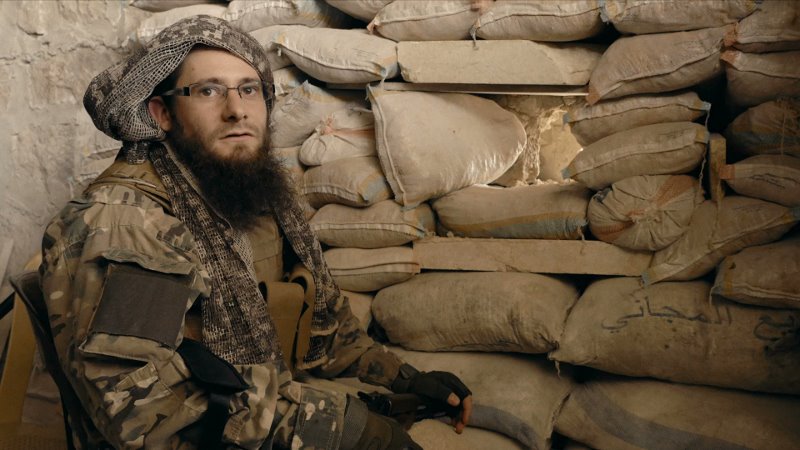 “I’m not so interested in going to the front lines as I was when I started thirty years ago,” Refsdal explains. “I’m much more interested in the psychology of these fighters.” Through living alongside them for so long, Refsdal is able to explore the two mens’ deeply-held religious commitment to their cause. But in contrast to jihadist propaganda that lionises them as warriors, he also reveals their self-reflection, doubt and, in Qaswara’s case, passion for fried chicken.

“For Abu Qaswara, going to the staging post for his mission was just like another day at the office: the standard preparations, putting on his uniform and so on,” Refsdal explains. “When the mission was aborted after his vehicle was destroyed in a Syrian government air strike, he was like, ‘Ah let’s go eat chicken.’ He was so surprisingly relaxed about the situation. If you’re certain you’re going to paradise, you’re not concerned.” 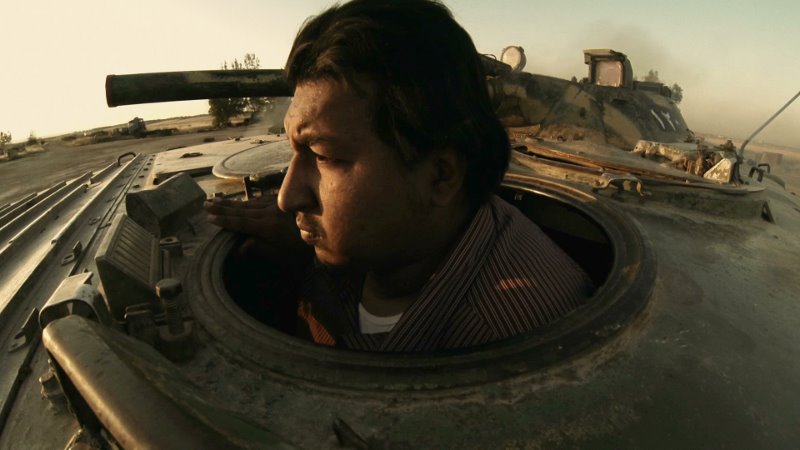 Abu Qaswara was comfortable sharing videos of his young daughter, who he’d never met, while openly discussing his upcoming martyrdom operation. But the experience of Abu Basir al-Britani, a 26-year-old white British convert from London, helped to show the struggle to maintain resolve necessary to go through with the operation. His wife falling pregnant forced him to seriously reconsider his decision, as he weighed it alongside the responsibilities of becoming a father: “If I take a conscious decision to press the button… they will not forgive me,” he says in a moment of reflection.

Refsdal is keen to stress that the martyrdom seekers in his film are unlike ISIS, who unleashed terror on civilians in Paris, Brussels, Algeria, Turkey and elsewhere, but are engaged in tactical strikes against military targets. “I call it the poor man’s precision bombing,” Refsdal explains. “If the UK wants to bomb a target you send a Tornado jet carrying a guided bomb. These guys have to drive a truck and push the button.” 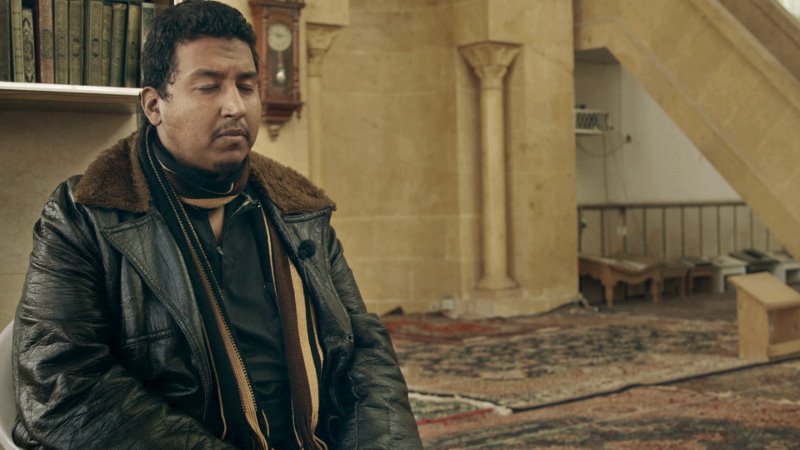 For Refsdal, Dugma is a much-need attempt understand enemies who are misinterpreted and caricatured in Western media coverage, which in turn harms our ability to make proper decisions regarding the conflict. It’s a longstanding flaw of media, that has become particularly acute in the post 9/11 era, as we wage never-ending conflicts with little real understanding of who are enemies are and why they are fighting us.

“My question is showing the point of view of the enemy,” Refsdal explains. “Media hasn’t really developed much beyond 1916, during the First World War. People are reluctant to say anything positive about our enemies. There aren’t many borders to media coverage, you can almost do anything. But [showing the enemy point of view] is the last barrier in free reporting.”

So, what is the consequence of the failure to report on and understand enemy combatants? “The result is that any government can say, ‘We are the good guys, they are the bad guys and we should bomb them to smithereens’,” Refsdal explains. “There’s no second opinion on that. So it makes it very easy for any leader who wants to go to war to justify that position if there are no critical journalists to say, [in the case of the Syrian conflict], ‘Maybe these guys are only patriots or maybe they are fighting a dictator,’ for example. That’s the consequence of a lack of good reporting on the other side.”

After getting so close to his characters, Refsdal couldn’t help but empathise with them and he admits posing questions he hoped might provoke a rethink of their decisions to martyr themselves. Provoking viewers to feel the same sense of empathy was the primary goal of his film, and the only way to overcome seemingly intractable conflicts, he believes. “I want viewers to see that these people are human beings,” Refsdal explains. “It sounds very naive, but it’s important that people consider Al Qaeda as human beings.”

Dugma: The Button is released worldwide on iTunes, August 2.

Linkedin
RELATED ARTICLES
OTHER ARTICLES
A new report has found that the majority of Britains approach trans issues with compassion. It’s about time this was reflected by our media landscape.
Over the years, a swimming hole in a city park has evolved into a magnetic meeting place for Philadelphians – a hideaway where people can connect with the natural landscape, and each other.
50 years since its inception, and the campaign calling for recognition that capitalism depends on domestic labour is as pertinent as ever.
Writers Gracie Mae Bradley and Luke de Noronha take on the callousness of borders, arguing for a world beyond them.
Over a dozen Stop Deportation activists locked themselves to each other outside a detention centre to prevent coaches taking those due to be on the Rwanda deportation flight from leaving.
The singer-songwriter discusses her intimate new project – and the advice she’s picked up across a career as one of rock’s leading voices.