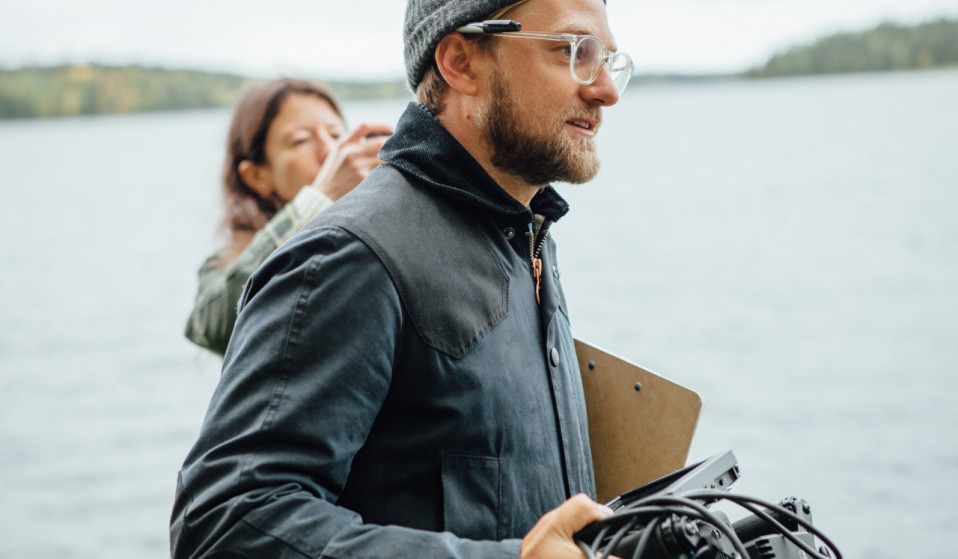 What does it take to make an exciting adventure film? Mikey DeTemple talks wrangling sharks, dropping off waterfalls, surfing rocky rivers and diving far into the deep.

What does it take to make an exciting adventure film? Mikey DeTemple talks wrangling sharks, dropping off waterfalls, surfing rocky rivers and diving far into the deep.

Mikey DeTemple is that guy with his face half-submerged in the sea on billboards all around the world.

If you’ve passed through any major global city in the last couple of months chances are you will have seen him bobbing around as part of Apple’s #shotoniPhone6s campaign and that couldn’t really be a more perfect introduction: Mikey DeTemple is a waterman. And the films he makes – cult surf classics like Picaresque, Sight/Sound and North – are fraught with a deep passion for water in its many forms.

But a recent project Journey From The Source – a series, in collaboration with Finlandia and Huck, about people whose lives revolve around water in dramatic and surprising ways – has seen Mikey segue into new territory. Following a deep-water freediver, shark wrangler, whitewater kayaker and river surfer, the films exhibit Mikey’s passion for narrative and adventure filmmaking and are typical of a genre on the rise.

With new technology like drones and GoPros more accessible than ever, adventure filmmaking is going through a sort of golden age. But there is a lot more to the discipline than access and guts. So we caught up with Mikey to find out what it takes to follow those who follow no one and find out why the great work is about a lot more than jumping off the edge.

How did you get into filmmaking and how did your career take off?
I got into filmmaking through surfing. I had made a few surf films, and my second full length film did really well and I think that’s when things started to click.

Were you always drawn to stories to do with water and why did that fascinate you?
My filmmaking started with the ocean at a young age, I would edit these little “sponsor me” movies to send out to companies when I was like, 13 years old. So, water and filmmaking have always been my natural environment.

How did the North project come about and what did you learn from that experience?
I was on a trip a trip to Iceland with Chris Burkard and Lucas Gilman. Chris was shooting photos and Lucas was testing out some new gear from some of his supporters and shooting video. After we got back from the trip, I asked him what he was going to do with the footage and he wasn’t sure. I pitched him the idea of letting me turn it into a story and editing it with a close friend. It was the first piece I’ve ever worked on that wasn’t really meant to be anything, but turned into something beautiful.

Do you think adventure filmmaking is on the rise?
Absolutely, on every level. It really doesn’t matter what the activity is that you’re shooting. It just seems like people want to see how you got there, what it took to get there, and all the obstacles of being somewhere rugged and raw. It’s easy to just shoot the activity, or “sport” but the story on how and where is what’s really compelling and viewers are really getting that.

What do you think makes a good adventure film?
I think a story is what’s important. For instance, it would be so easy to fly somewhere and shoot some surfing and make a surf edit. But that’s boring. At least for me, I don’t want to watch 30 minutes of just straight surf – I don’t even want to watch five minutes of just straight surf. And I think you could say that with almost anything that would fall into the adventure film genre – climbing, kayaking, fly-fishing – I would want to see the travel aspect of all of those activities. Tell a story with a beginning, middle, and end. Something the viewer can relate to and get excited about – and in the end, make people want to get out there and do something themselves.

What were the challenges of working on a series like Journey From the Source?
We had such an amazing team. The really only tough part was the twenty-something straight days of travel and jet lag. It was tricky staying on top of your game and remaining sharp at 5am on the East Coast while having just landed from London the night before. After the jet lag, which was fixed with massive amounts of caffeine, was the fact that the majority of time was spent shooting in uncontrolled environments. Each location had something a little tricky that we had to work with. We dealt with weather continuity and rain while in Finland. In Florida we sat three miles of the coast for six hours in hurricane swell seas, waiting for a shark to show up. The rapids in Virginia were so strong after a week straight of record-breaking rainfall that the shoot almost didn’t even happen. And in Colorado we had the opposite problem of finding rapids that were flowing. But it’s nature and it’s out of your hands. You just have to learn to work around it and know you’ll be able to figure out a plan b for every scenario.

You have many people’s dream job – but do you make sacrifices to do what you do?
I absolutely love my job. It really is my dream job. If there any sacrifices that I have to make, the positive always outweighs the negative.

What is your favourite place you’ve travelled to on the job? And the project that most affected you?
Iceland was one of the most dramatic places I’ve ever been. It has definitely stuck in my head as such a special trip, and an unbelievable place.

What advice would you give to a young adventure filmmaker getting into the game?
Learn your craft, ask a ton of questions and get out there and do it.

These films were sponsored by Finlandia in support of 1% for the Planet. Read in-depth articles with each Journey From The Source protagonist and learn more about their stories.

Linkedin
RELATED ARTICLES
OTHER ARTICLES
He’s almost 50, he's got asthma, he’s about 235 pounds, and he's also a world-class athlete. Meet 'Kraken', the sea monster – a Finnish freediver who only realised he had the makings of a national champion in his late 30s.
With a surf film festival in London and a predilection for cold-water surfing, Chris Nelson finds adventure in unexpected places. Here he reflects on the wild tales of his life.
Stephanie In The Water documents five-time surfing world champion Stephanie Gilmore's battle to stay at the top of her game.