Art & Culture / Film / This DIY filmmaker made the ‘Boyhood’ of skateboarding 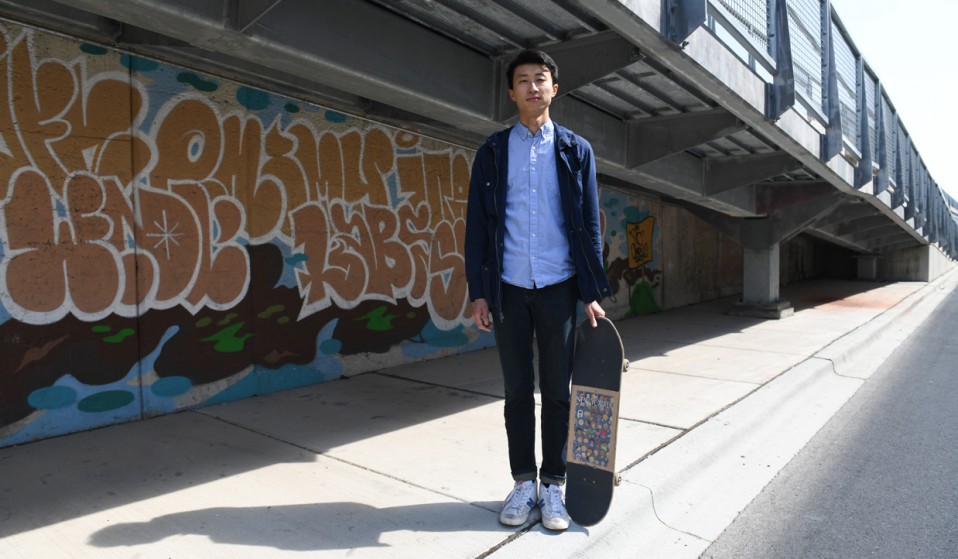 As a kid who grew up on the move, often left at home alone, Bing Liu only found a sense of belonging when he picked up a skateboard. His acclaimed new documentary Minding the Gap captures a decade-long bond between three friends escaping volatile backgrounds.

By the age of eight, Bing Liu had lived in Beijing, Alabama and South Central LA before settling in the rust belt city of Rockford, Illinois.

Once there, he’d spend his days alone in a small apartment complex, guzzling cans of Mountain Dew and jumping on the couch, loaded from sugar and transfixed by the television set. It was from this TV that he taught himself English, watching movies like Mortal Kombat on repeat.

“I was a bit of a feral child,” he says over breakfast in a Copenhagen hotel, just after a screening of Minding the Gap, his debut feature-length documentary, at the CPH:DOX festival. Now 29, Bing is immediately sweet and likeable, softly spoken and a little shy.

“I don’t know if I was born an introvert but I feel like that’s very much who I am… I think child services might have been involved if they had known how much time I was spending alone.”

While Bing’s mother was out working two jobs, that time home alone cultivated an early love of films and shaping dream worlds. “I got to see a lot and learn a lot,” he says.

“I was creating my own imaginary universe. I had trouble connecting with other people growing up. I was trying to fit in and learn to be an American, which was tough in these weird places like Alabama and working-class Rockford.”

Skateboarding proved to be Bing’s saviour, serving as an introduction to a community with shared interests.

Without that discovery, he adds with a quiet chuckle, he could have just as easily disappeared into the world of Pokémon. “All these things were a form of escape,” he explains, from a domestic situation that turned violent.

Shortly after moving to Rockford, his mother remarried a retired man who spent much of his newfound time-off abusing Bing.

“There was a lot of violence and fighting,” he recalls. “There were times when we would spend nights in a women’s shelter. There was even a month where my mother sent me to live with a Vietnamese priest…

“That was weird,” he adds, with a tone melding amusement and bafflement. “We’ve never even talked about that.”

With skateboarding, it wasn’t just doing tricks; it was about finding solace in another family unit – one that he’d chosen for himself. But picking up a camera only amplified that sense of belonging.

“When I started filming skateboarding, I fell in love with that. It was a daydreamers’ dream: a tool to create dreams.”

Minding the Gap initially started out as a project about skateboarders and their families but, as Bing returned to Rockford more often, the characters he’d filmed as a teenager began to dominate the narrative. 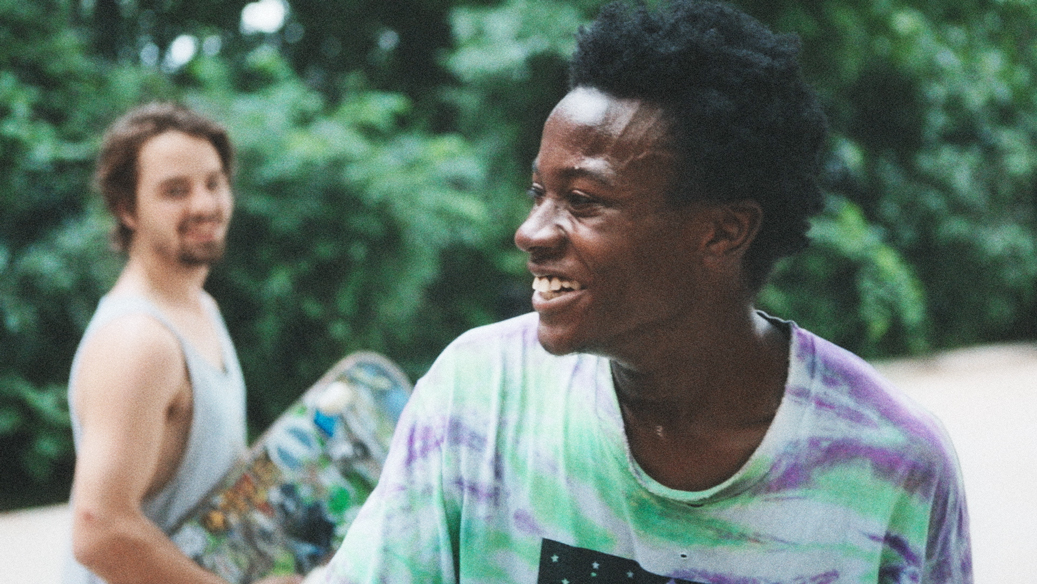 There’s the fun-loving Zack, who has to embrace the responsibilities of adulthood sooner than expected when his girlfriend Nina becomes pregnant.

Then there’s Keire who, following the death of his father, questions his place among white friends in a town with few prospects and a dwindling population.

As the trio grow older, the careless abandon of youth begins to fade. In its place emerges a sense of fragile masculinity and the danger that history could be repeating itself.

“You think of domestic violence and you don’t necessarily get the warm fuzzies,” Bing says of the film’s darker moments. “That’s what was enjoyable about making Minding the Gap: it was emotionally holistic; you get all the joys, laughter and sadness.

“You experience the growing pains of what it means to come of age and, while violence in the home was a part of that, it doesn’t define you.”

There is an undeniable innocence and beauty to much of Bing’s film; one that wrestles with the pressures of adulthood and the stresses it brings. It’s also an extended conversation about navigating the knock-on effects of abuse.

“It’s about grappling with that sentiment because you’re not going to make it go away just by demonising it. I wish it was a subject that could be discussed a lot more without knee-jerk, reactionary responses.” 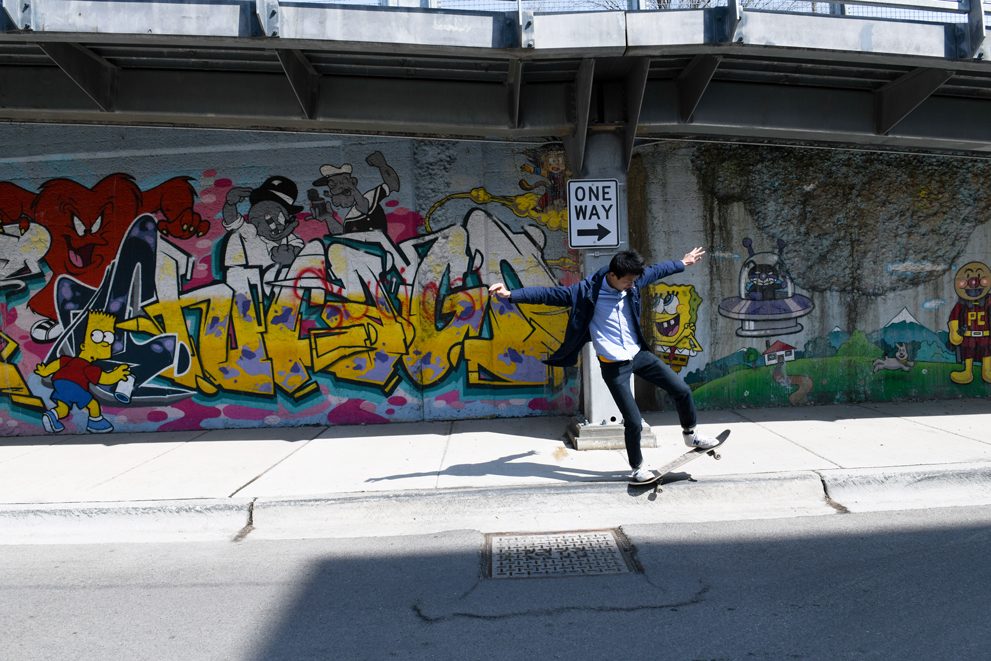 One particular shot in the film, filmed by a teenage Bing, captures the grip-tape on a skateboard with an inscription that reads: ‘This device cures heartache.’ That message seems to be an underpinning theme of both the film and Bing’s life: that skating can be a means of therapy.

“I was really cognisant growing up as a teenager of what skateboarding can do for you – mentally, spiritually and emotionally.

“When you get to my age, I’m not jumping down stairs or anything… but it’s much more meditative for me and I realise that now. My favourite thing to do is just put on headphones and go and skate by myself.”

Within minutes of our conversation ending, Bing heads off to do exactly that on the icy streets of Copenhagen. But just before he leaves, the director reflects on whether filming his and his skater friends’ difficult lives has become a way to stitch wounds.

“It’s my healing tool,” he says firmly. “But I also don’t know what else I would do.”

Minding the Gap will screen at Sheffield Doc/Fest on 9 & 12 June. See all screening dates.

This article appears in Huck 65 – The Coming of Age Issue, out 11 May. Subscribe to make sure you never miss another issue.

Linkedin
RELATED ARTICLES
OTHER ARTICLES
The author discusses the all-consuming nature of heartbreak, and turning the experience into an incisive exploration of love and loss.
Freddie Miller’s new series of photographs investigates who today’s trainspotters are and what drives their unfettered enthusiasm.
In the wake of the decision by the supreme court to overturn Roe v Wade, thousands of protestors filled the streets to express their rage and anguish.
Proposals to introduce a minimum GCSE threshold for student loans will disproportionately affect those from marginalised backgrounds.
Curator Antoine de Beaupré discusses his immense record collection and what it tells us about the intersection of music, photography, art, and commerce.
The last few years have seen an increase in LGBTQ-led initiatives to feed the hungry, with many finding ways to stay afloat despite the challenges.