A new film documents the surreal week leading up to the performance of controversial Slovenian art-rock band Laibach in Pyongyang – the first concert ever played by outsiders in North Korea.

Liberation Day documents the surreal week leading up to the performance of controversial Slovenian art-rock band Laibach in Pyongyang – the first concert ever played by outsiders in North Korea.

The sun is shining high in Kim Il-sung square, Pyongyang, and a group of five people dressed in dark grey shirts and trousers are squaring up in front of a camera. Behind them stands the imposing North Korean Ministry of Foreign Trade. All around them life continues as usual, even as they film their scene. The four men and one woman staring down the lens are a band, and they’re in the DPRK to sing a militarised version of The Sound of Music and film a documentary, but most importantly of to make history. Very strange, absurd history, but history nonetheless.

Flashback to 2015. Considering the amount of secrecy surrounding North Korea, and its strict policy of limiting access to outsiders, the initial announcement that Laibach – a Slovenian avant-garde industrial art-rock act hailing all the way from the 80s – would be the first Western band ever to play in the country was quite unexpected, to say the least.

The worldwide shock came not only from the fact that it was a rock concert that was chosen to be the first performance by outsiders in North Korea, but Laibach’s particular act and performative choices too. The band has been, since their inception, repeatedly criticised for their usage of overt neo-fascist iconography – uniforms, manifestos, terrifying propaganda-like videos and all – all while leaving to speculation whether they’re being critical of or just emulating totalitarian ideologies.

Liberation Day is a newly released documentary documenting the week leading up to Laibach’s North Korean debut, and it opens with a quote by the band. “All art is subject to political manipulation, except for that that speaks the language of the same manipulation,” it reads, seemingly an attempt to address the world’s concerns about their ideologies.

Philosopher Slavoj Žižek has repeatedly argued something similar to support the band – that they expose the system by reflecting its message directly back on itself. But then again, Žižek also argued that voting for Trump would shake up the system. So make of that what you will.

It’s not just the subject of this doc that’s bizarre, but also the timing – the visit was back in August 2015, a part of the celebrations of the 70th Liberation Day, the anniversary of Korea’s independence from Japanese imperialism. The independence from the same Japanese empire that joined forces with Nazi Germany and fascists during World War II.

Again: If the whole thing sounds very, very strange, it’s because it is.

The unlikely event was envisioned and put together by Norwegian artist and filmmaker Morten Traavik, who had previously worked with Laibach on one of their music videos, and has worked time and time again in cultural exchange projects between Europe and the DPRK. He is also the narrator, tying the story together while working with co-director with Uģis Olte.

Morten first visited North Korea back in 2008 – driven by curiosity above anything else. Since then, he has been back more than 15 times. He too has been criticised for artistic collaborations with the overtly authoritarian country.

“What I saw and what I experienced in North Korea was a very peculiar mixture of the expected and the unexpected, and this impression has stayed with me ever since,” Morten tells me over the phone. “It’s impossible for us, from any part of the world outside of North Korea, to go there without a quite heavy mental luggage – of expectations, of prejudice. A view coloured by what we know or what we think we know about a place like that.”

“It’s very easy to have your prejudices confirmed because on the surface, everything which we see – the military parades and the bizarre three-quarters religious leader cult – all of this is true, it’s happening. So I’m not saying that our conception of North Korea is built on a lie, because it isn’t – but it’s very distorted, and it’s very one-sided. That is one of the first things you discover when you go there. Unless, of course, you have already made up your mind.” 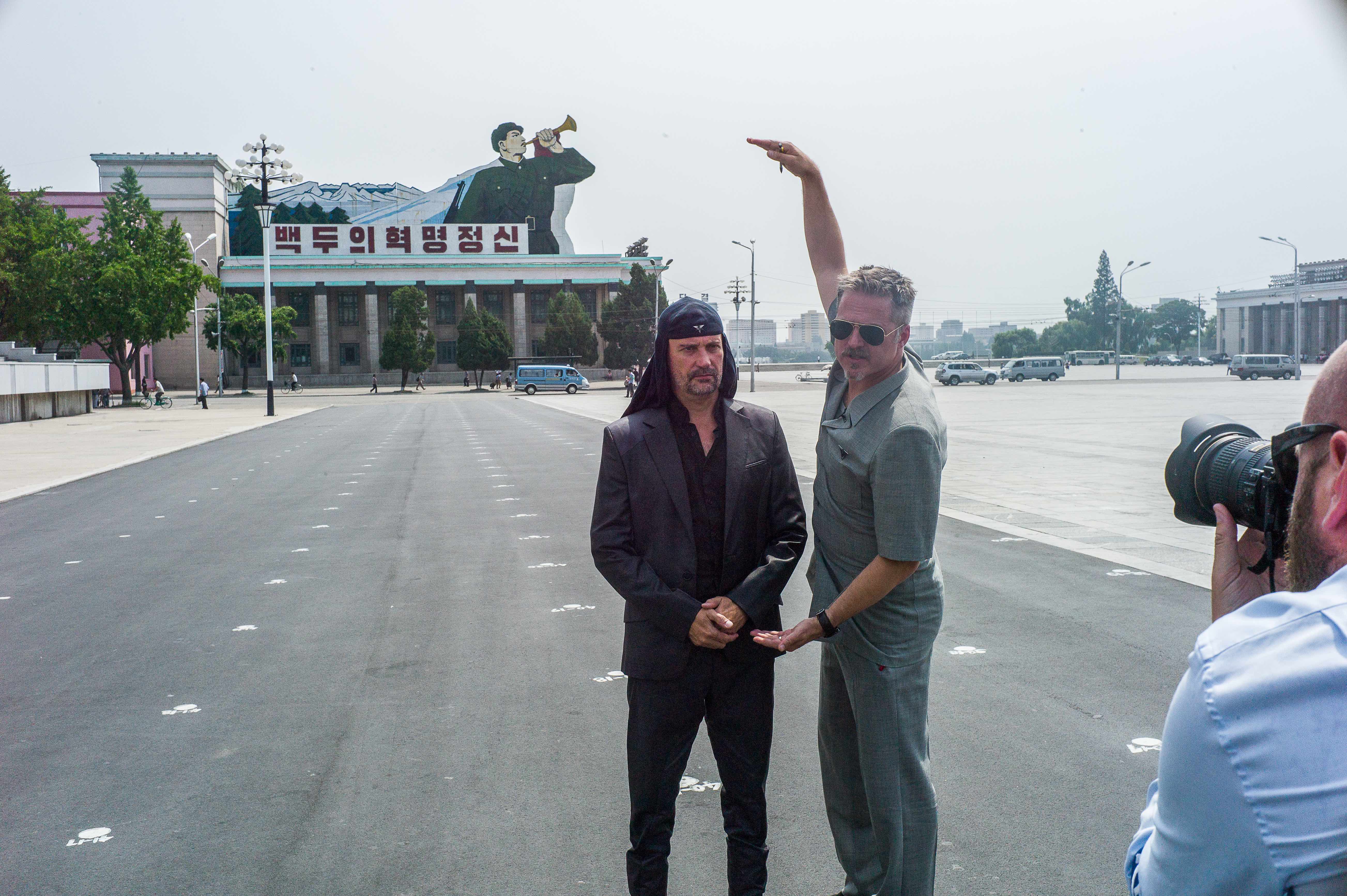 Morten believes that the coming together of Laibach and North Korea was quite a natural fit, somewhat controversially arguing in the film that they are “both misunderstood”. He also mentions that the band’s act has elements that are familiar to a North Korean audience, rife as they are with military inspiration.

The filmmaker mentions he has always had a deep interest in mass movements (of every political inclination), and the way they seem to develop almost naturally in society – the human need to be part of a group.

He points out that as opposed to North Korea’s all-encompassing collectivism, where you see both the “sinister and the inspirational sides” of group mentality, the West’s only current references of experiences like that are football matches and rock concerts – all others tarnished by “20th-century monsters” like Hitler and Stalin.

Of course that the first rock gig in North Korea didn’t just happen from one man’s determination. The entirety of the visit   was accompanied by officials Mr. Ryu and Mr. Ri – Morten’s “homies” and long-time collaborators, who he calls “rock n’rollers in their own, state-employed kind of way”. They placed their trust in Morten’s idea in a completely unprecedented way, very aware of the risks involved in making the concert happen.

Even in the months building up to the show, stress levels at their highest, the project was repeatedly at risk of being called off, many concerned about Laibach’s views.

But as well as the strangeness of it all, there are hints of familiarity –  navigating a sound system not working at the last minute, young people enjoying loud music. “Most of the older people there hated it. I think would be a bit of a bummer for Laibach if they didn’t,” says Morten, laughing. “If Laibach was totally palatable for sixty-year-olds hearing rock music for the first time I think they’d need to reconsider their street cred.”

The gig ended up getting a positive review in the party’s paper – not shown in the documentary – which called the whole event “very interesting and a success”, meaning that the organisers were officially off the hook and could rest easy.

Stating that any of what happened has permanently changed North Korea’s authoritarian political situation would be pretty far-fetched because it didn’t – but between the historic value, the confusing ethical ambiguity of the whole thing, and the underlying feeling that this happening may have been in some way critical,  there’s no denying that the perspective of North Korea offered by Liberation Day is unlike anything else you’ve seen before.

Liberation Day is available exclusively on iTunes now, via Dogwoof.

Linkedin
RELATED ARTICLES
OTHER ARTICLES
The situation in Afghanistan remains dire, with many groups facing persecution at the hands of the Taliban.
While protests over abortion rights rage in the US, access to abortion services is still almost nonexistent in parts of the UK.
New legislation is set to make it more difficult to hold Israel accountable for its human rights abuses.
In the latest OFFF Dispatch, the enigmatic designer dives into his process, connecting the dots between his unique and varied creative output.
In our first OFFF Dispatch piece, the Arce Studio founder shares her tips on standing out from the crowd.
The government is scrapping the Human Rights Act in a move that will hit marginalised people hardest.