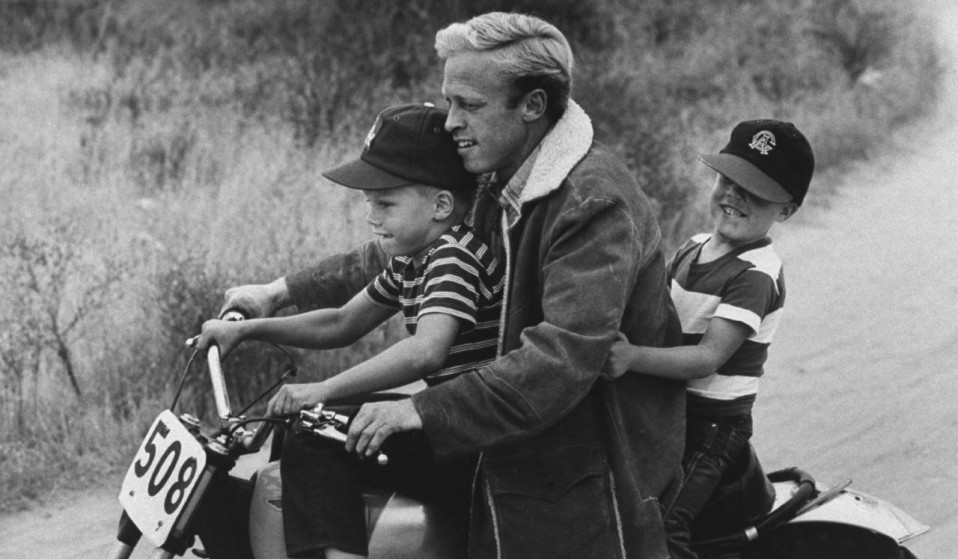 Following news that the director behind The Endless Summer and On Any Sunday has died aged 80, Huck pays tribute to his groundbreaking cultural legacy.

Following news that the director behind The Endless Summer and On Any Sunday has died aged 80, Huck pays tribute to his groundbreaking cultural legacy.

News came from the USA this morning that filmmaker Bruce Brown, born 1937, has died.

Having been brought up in in the crucible of pop-culture creativity that was post-war California, Brown was a prolific, fiercely independent creative who produced in The Endless Summer and On Any Sunday: two powerful filmic foundations of surf and bike culture.

At the start of the 60s, Brown had already created influential surf films such as Surfing Hollow Days (which documented some of earliest rides at Banzai Pipeline). But The Endless Summer (1966) was to change the landscape of surf creativity forever. The film is an innocent take on mid-’60s surfing despite the fact there is something neocolonial about the flavour of the film. The narrative, which is voiced by Brown himself, follows a pair of sharp-suited, slick-haired surfers in Robert August and Mike Hynson, as they travel from the US to West Africa and then on to South Africa, Polynesia and beyond.

They discover what appear to be virginal coastlines unsullied by other surfers, and in South Africa they stumble upon platonically symmetrical, endlessly peeling waves that suited perfectly the aesthetic of wave riding of the era. Bruce toured the film all over the USA and the world, unwittingly creating an enduring image, one that remains embedded deeply in surf culture – the globetrotting search for the perfect wave.

In 1971, Brown convinced superstar Hollywood wild man and passionate bike racer Steve McQueen to feature in and help fund a sweeping, beautifully shot review of the American bike scene. On Any Sunday was unlike any feature-long documentary – and certainly unlike any of the numerous bikesploitation flicks that had clogged up the world’s cultural arteries at the time.

Following a narrative that engaged everything from street racing to flat track and what we would now call enduro, the film will be remembered most for the heartbreakingly gorgeous climactic final scene, in which McQueen and friends play elegantly, joyously, on a dune-strewn beach to the backdrop of a red setting sun – fittingly taking the creed of the petrolhead back to the elemental beauty of the beach. The film was nominated for an Oscar that year too.

Whether or not this tacit link that this final scene made between surf and biker culture was a conscious decision, in a few hundred minutes of 16mm celluloid, Brown had evoked an elusive commonality between these worlds that were often seen to be polar opposites. Brown’s ultimate legacy would be to place the salt-streaked natural highs of paddling into the ocean with the greasier, louder experience of a wind-in-the-hair life with motorcycles front and centre.

Thanks Bruce. We are forever in your debt.

Linkedin
RELATED ARTICLES
OTHER ARTICLES
Filmmaker Laura Poitras discusses her new documentary which traces the remarkable life of the artist-activist and the impact of her battle against the US opioid crisis.
A new law change is enabling Britain’s donor-conceived children to know the truth about their origins – but campaigners say the fertility industry must do more to protect people.
A recent High Court ruling against the right to wild camp in Dartmoor National Park sparked the largest land protest in history – and campaigners say their fight is not over yet.
Social prescribing connects people with non-medical support to improve their health and wellbeing – but some experts worry it’s just a stick plaster solution.
Activists and campaigners are fighting back against new laws that would seriously undermine the ability to take industrial action, calling it an attack on fundamental workers' rights.
Since 2007, Gideon Mendel has made 20 trips to document floods in 13 countries. The result is an alarming record of what has already been lost to the climate emergency.