In one of the smallest and poorest countries on earth, filmmakers are bringing people together around stories about Rwanda’s dark past.

In one of the smallest and poorest countries on earth, filmmakers are bringing people together around stories about Rwanda’s dark past.

Few Rwandans lucky enough to survive the 1994 genocide did so without deep physical or mental scars: losing limbs to machetes, seeing family members killed or harbouring regrets over who could have been saved.

Rwandan filmmakers are at the forefront of struggles to help their country come to terms with how neighbours were driven to kill neighbours, and find a way for those same people to live side by side in peace. Many are fighting their own deep personal trauma which mirrors that of their nation – like director, fixer and film festival organiser Ayuub Kasasa Mago, the star of documentary Finding Hillywood.

Ayuub is one of the central figures fighting to build the fledgling industry in difficult circumstances. After the ’94 genocide, Rwanda was the poorest country in the world and despite two decades of impressive growth remains a low-income country. Today it has a population of just 12 million, of whom only a small percentage have access to electricity, which makes the local market tiny. 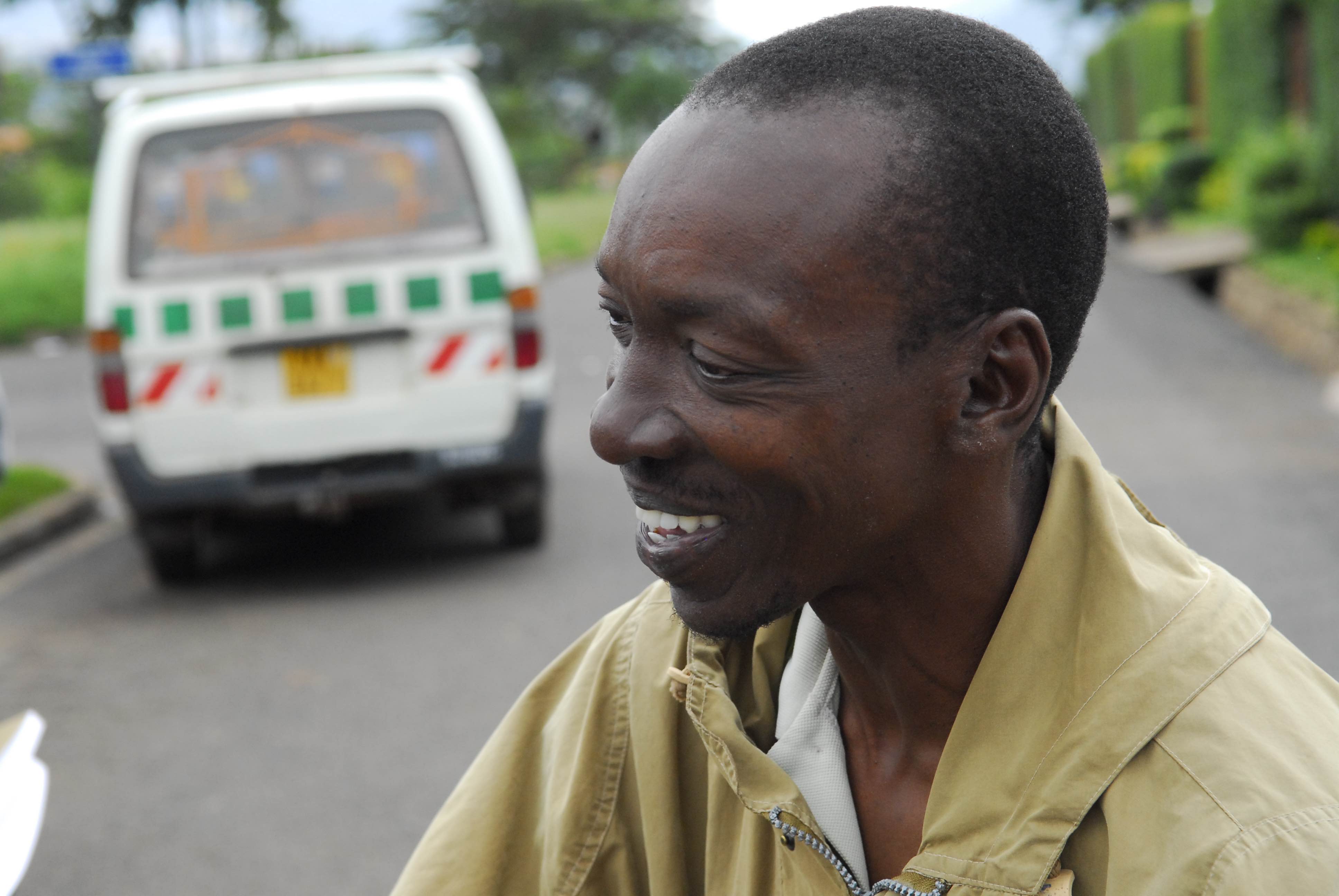 Ayuub’s Hillywood film festival travels the country’s famed rolling hills, screening films on an inflatable screen in the local language Kinyarwanda to rural communities. It’s tiring work, but for Ayuub, bringing Rwandan filmmmaking to people who have never seen a cinema in their lives helps in his own search for peace and answers.

We spoke to Finding Hillywood co-director Leah Warshawski to find out more about Rwanda’s emerging cinema industry and where it goes from here.

How did you first come across the story of Hillywood?
Chris Towey (co-director for the film) and I were in Rwanda in 2006 working on a different project for a corporate client. We film all over the world and everywhere we go, we hire local fixers to help us navigate in-country. In Rwanda, some of the crew we hired were involved with the Rwanda Cinema Center and they told us about the festival they put on every year called Hillywood – where hundreds of people show up to watch movies on a giant inflatable screen.

We left Rwanda and a few months later I was still intrigued by this idea… So we raised enough money to go back in 2007 as a “scout” and this was the beginning of production. It was also the first time we met Ayuub, who has since become our good friend and ‘family’ member. The first time Ayuub and his team set up the screen for us we knew we needed to make a film about “Hillywood” to share with the rest of the world. We didn’t know at that time that Finding Hillywood would become a feature… there were a few times we considered making a short instead. But I don’t have any regrets and I think the film turned out to be exactly as long as it should be.

Obviously the genocide casts a long shadow over everything in Rwanda, but how much of the film industry’s output is focused on the genocide? What are the other genres, etc. that are doing well?
It’s true that the genocide casts a shadow but I do think there are plenty of other topics filmmakers are exploring – comedies, dramas and animations have become very popular. Ayuub says in our movie that “genocide is always present in every single aspect of life” but the friends we know in Rwanda also feel like it’s time to make films about topics that aren’t so heavy. When Hillywood first started most the films dealt with heavy topics like genocide, prison, domestic violence, etc. but now filmmakers are branching out and they don’t want to be defined only by the genocide. 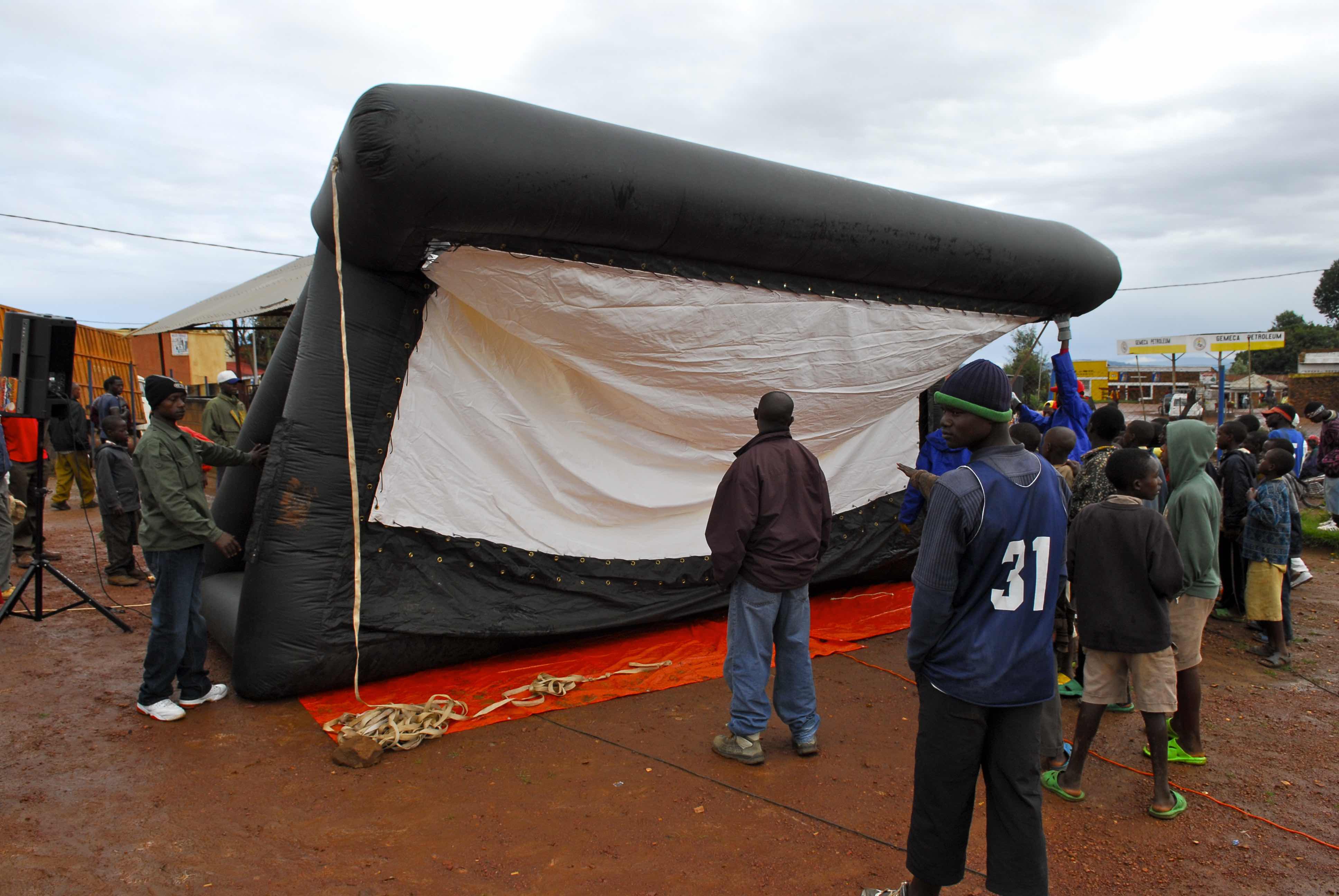 What are the major challenges for Rwandan filmmakers?
Rwandan filmmakers have similar challenges as other filmmakers around the world, mainly funding. Gear is expensive (and often has to be imported) and securing budgets that allow you to pay your crew is tough. Lots of filmmakers are scraping by doing the best they can, but it’s tough. Showing films around the country is challenging on many levels (as you can see in our movie) – bartering for electricity, permits, weather delays… And then being able to pay a team to run Hillywood.

Eric Kabera (who started the Rwanda Film Festival) is constantly looking for funding to keep the festival going. And you have to remember that they show films in remote parts of the country, where not all the roads are paved and it takes hours to drive in-between some of the locations.

How big a role do female filmmakers play in the fledgling industry?
There are lots of female filmmakers now in Rwanda and some women we know are successful directors and producers there. Like every other film industry women are still fighting for equal pay and looking for opportunities to succeed… there’s still a ways to go. Female filmmakers bring a unique perspective to the table and of course we want their voices to be heard. It’s tough to be a filmmaker no matter what gender you are so it’s hard to single out just women – because there are some men who are working equally as hard just to break into the industry. No matter what, it takes hard work and perseverance.

Where do you think the industry will be in 5-10 years?
I hope the industry will keep growing and growing. I hope filmmakers will have an easier time fundraising for their projects and most importantly, I hope the industry can sustain itself so that filmmakers can work. Filmmakers we met in Rwanda are eager to work and that’s one of the reasons we co-founded rwandafilm.org (our outreach site that’s similar to a “LinkedIn” for Rwandan filmmakers). I hope that female directors continue to shine and receive support for their work. And I hope that foreign producers see Rwanda as a viable production location – crews are eager to work and learn, and there are so many vibrant and unique locations in Rwanda. Go there and see for yourself!

Could you suggest some films that would be a great intro to Rwandan cinema?
Well – I’m not an authority on Rwandan cinema – we made a movie about filmmakers and not about the entire birth of the industry, but I do try to keep tabs on Rwandan films that go to major festivals and we stay in touch with some of the filmmakers we met through Finding Hillywood. Here are a few suggestions. 100 Days by Eric Kabera (founder of the Rwandan Cinema Center) is one of the first Rwandan feature films (if not the first) – a landmark for Rwandan cinema and a good reference point. Kinyarwanda by Alrick Brown premiered in 2011 at Sundance and received accolades and notoriety from top-tier festivals. Well done and high production value.

The reality is that before we made Finding Hillywood, we didn’t know much about Rwandan cinema and were just as surprised as our audiences for the film to learn there was a budding film industry. It has been an honour and pleasure to learn about Rwanda, become friends with local filmmakers, and watch the industry grow.

Linkedin
RELATED ARTICLES
OTHER ARTICLES
In the wake of the decision by the supreme court to overturn Roe v Wade, thousands of protestors filled the streets to express their rage and anguish.
Photographer Arthur Grace recalls travelling through the Soviet Bloc and finding ways to evade the surveillance of his work.
LGBTQ+ students are keeping the spirit of the original Pride alive by fighting for liberation for everyone, not just their community.
Thomas Hoepker‘s images taken during a road trip across America provide a searing social commentary about a divided country.
50 years since its inception, and the campaign calling for recognition that capitalism depends on domestic labour is as pertinent as ever.
A new edition of a seminal book brings together iconic images of the band onstage in their full glory and backstage in moments of unguarded camaraderie.