Art & Culture / Film / How to survive as a DIY filmmaker 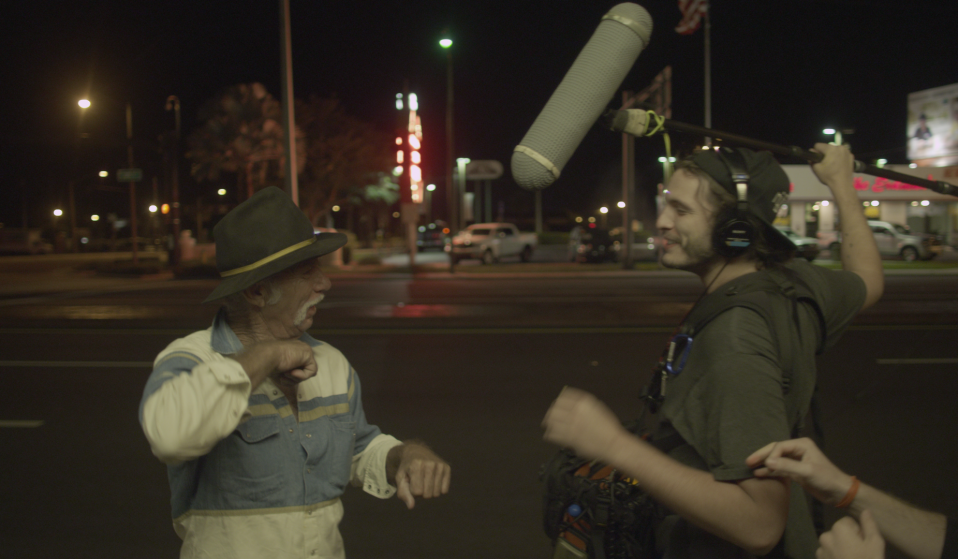 What connects an oxycontin epidemic in rural America, the Gathering of the Juggalos, nude webcam modelling and the gutter prophets who wander the sun-bleached streets of Southern Florida? They’re all DIY documentary projects from Sean Dunne, who’s fast emerging as one of the brightest independent filmmaking talents of our generation.

Dunne rejected the studios to carve out his own path, crowd-funding and using internet distribution to allow himself to walk through often controversial territory. He was criticised for his honest and unvarnished portrayal of drug addicts in Oceana, West Virginia in Oxyana and is already feeling the heat for his latest project, Cam Girlz, which profiles women who find wealth, empowerment and community through naked camming.

Dropping within days of Cam Girlz, his latest film Florida Man was shot during a ten day road trip through Central and Southern Florida in search of knowledge from the colourful characters who inhabit the area’s street corners, beaches and parking lots. At first glance, the two projects appear worlds apart, but look a little closer and they both carry Dunne’s fingerprints of rawness, a confident blending of both darkness and light, and open-ended narratives that let his subjects present their worlds on their own terms – leaving audiences to make up their own minds.

We caught up with Dunne to talk about the collapse of Hollywood institutions and punk filmmaking.

What attracted you to documentary filmmaking?
People, man! I’ve always had a deep fascination with people. Right now I’m staring out of my window watching these guys do construction and all I can think is how cool it would be to just get a couple of their thoughts on tape and a couple of shots of them. I’ve structured my life so I can very much be in the moment. When you’re in the moment you realise that there’s beauty and inspiration everywhere. It wasn’t until getting into documentary that I realised how much a part of me this was and how inspiring it was – and how much a part of my art, my life, it could be, moving forward. So, the short answer is people really inspire me and continue to do so. I think there will never be a lack of inspiration as long as I stay focussed and stay in the moment.

Why did you chose to ignore studios and take a DIY approach?
I’ve never been one to chose the path of least resistance. I think I have a bit of the punk rock attitude inside of me. I was lucky enough to come into this “business” at the same time that it was really obvious, at least to me, that the industry was on the down tick and that a lot of the institutions that we held in high regard before are completely meaningless. I look at this as an opportunity to create a whole new ecosystem for the film industry. One that’s more democratised, one that’s less based on these old dying institutions. We saw what happened in the music industry and I came into the film industry right when I think they’re on the cusp of the same thing happening. It’s cool, it’s kind of like the wild west right now and I’m taking full advantage.

What has helped you navigate that path?
There’s a road that’s been paved for us. For me, all my success came from following my heart and learning to get there over time. When my instincts were telling me not to sign a horrible deal with my first film, it was good of me to trust that instinct and then put that film out myself. It’s the most exciting time in the history of filmmaking to become a filmmaker. I think that the mistake people make coming into this at first is buying into those old dying institutions. Listen to your instincts, listen to your heart and realise that there is an open road ahead. You can really make your own reality right now and that window of opportunity might be closing on us. The more filmmakers that get on board with this and feel their independence and become empowered from it, the better because then we really can create a more sustainable ecosystem, not based on some elitist hierarchy.

What would your advice be to those following in your footsteps?
Do not ask permission. Who are you even asking permission from anymore? There’s no one in charge! The parents have left – it’s a free for all. Don’t ask permission, follow your heart and get out there and start doing it. Start making your mistakes, start getting it out of your system. Put films out, see audiences reactions, feel it and follow your heart some more.

For me, it’s about process. It’s not about the little carrot at the end or the little prize at the end. For me, I’ve fallen in love with the process and the sooner that I can get back into making films, the better. It’s about moving on, letting go of old Hollywood bullshit and following my heart.

How did you come across the world of camming and what made you feel there a story there?
It was kind of on my radar a little bit, in the back of my head. Coming out of our previous film Oxyana, I wanted to do something less dark. There wasn’t a lot of hope there and I didn’t want to get pigeonholed into being that type of filmmaker.

So I started asking myself and my girlfriend all these questions and we did a little bit of research. We uncovered a really vibrant, growing community of women who are empowered by doing sex work. And shit, if that didn’t sound like a Sean Dunne movie, I don’t know what did. So we started pursuing it.

How did you approach such a potentially controversial subject?
The priority in the editing room was to take ourselves out of it as much as possible, even more so than anything I had done before. I really wanted this to come across in the voices of the girls. Figuratively and literally, I really wanted this to be from them. I think there is a lot of complexity to it. On the surface it could come off as a very positive love letter to camming but there are lots of issues there as you dig deeper through the layers. I wanted the audience to find that stuff and to judge for themselves. Are these people happy? Are they truly empowered by this? What do these decisions mean for these women’s lives moving forward? I really wanted to put that on the audience.

While on the surface it might come off as very positive, I think it’s actually a way better balanced film than a lot of people are giving it credit for. It’s all there, it’s there in the subtext, but like all of my other films it’s really a journey of self-discovery for the audience. You’re going through this and you’re absorbing these women’s words unfiltered, so I trust my audience and I trust their intelligence. I think the best documentaries are the ones that leave you with more questions rather than trying to answer them and I think that’s what Cam Girlz does.

I think we had it in the back of our minds that this was going to be controversial and it was going to be met with some resistance from certain sections of society – and we’re feeling that already. Finding the balance where they could come off as people and not pornographers was probably the biggest challenge and also the biggest priority – to have them come off as people first and foremost. A lot of my films aim to normalise behaviours that might otherwise be looked at as fringe or something to be feared. I’m trying to take these things which are feared by many, flip them on their head, approach them with love and see what that looks like.

Were Cam Girlz and Florida Man intended as companion pieces?
I think Florida Man fits perfectly as a companion piece to Cam Girlz, but it’s a totally opposite approach. In a way that was just getting me back to my roots. I lived down in Florida for four or five years. That’s where I started making films, doing exactly what I’m doing in Florida Man: going around, talking to the people that are hiding in plain sight and getting their stories and thoughts with no agenda.

With this project we thought, ‘let’s just put ourselves in a situation where we’re on the road for ten days with very little preparation, no agenda, no priorities and let’s see what that looks like.’ Let’s just speak to people. I think what we found was another opportunity to help people expand their consciousness a little bit and to challenge the audience to look at a lot of these guys who are pretty wild, and have some pretty wild stories and behaviours, to look at them as human beings, with sympathy as opposed to fear.

Were there any moments that stood out?
The whole film was kind of a blur – we didn’t even know where we were half of the time. We were often shooting quite late at night, there were some dicey situations where we came across a character that, even though this person was agreeing to be on camera right here, we weren’t really sure if they can be harnessed in any kind of way. But for the most part it was a really positive experience. We weren’t trying to bother anyone that didn’t want to be a part of it or anything like that.

Florida Man opens with a dude squaring up, trying to fight our sound guy. In a lot of ways that scene encapsulates the whole trip because he’s squaring up and our sound guy’s lighting a cigarette and trying to ignore him. Then the guy proceeds to laugh it off and begins answering my questions. That really encapsulates our whole journey in one scene. You see these really out-there, volatile people willing to bare their soul on camera. It was really eye-opening for us and dicey at some points but I’m so glad we got through it and we were able to bring a document of this time and place together. I look at it as a bit time machine. For me, it’s always about creating this portal for the audience to experience and go and be around these characters. That’s the type of stuff I love. I’m not looking for the most well-produced thing, I’m looking for the realest thing out there.

You can watch Florida Man completely free and Cam Girlz is available at Vimeo On Demand.

Check out Sean talking about his previous film Oxyana.

Linkedin
RELATED ARTICLES
OTHER ARTICLES
Over the weekend, the United Families & Friends Campaign organised a protest calling for an end to deaths at the hands of the police.
Photographer Ira Lapu documents the lives of ordinary Ukrainians living amid a brutal conflict.
A new photo series documents tribes preserving the environment through simple, sustainable practices in central Asia.
The photographer reflects on a decade which saw the rise of MTV and the flourishing of new genres.
Following the release of their third album, the duo talk collaboration, family and connecting with the dead.
A new exhibition brings together 150 works by twelve photographers, offering mesmerising and intimate depictions of life.