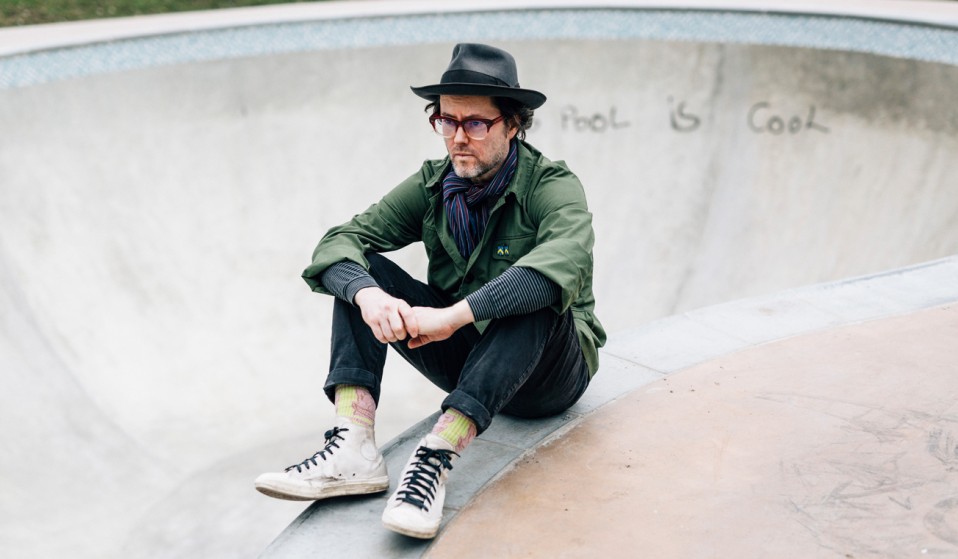 After his career as a pro-skater fell apart, Maximón Monihan had to reinvent himself as a DIY director who thinks outside the box. Now, having taken a road-trip across the US with his best friend, he’s realised that true success is doing what you love, regardless of reward.

After his career as a pro-skater fell apart, Maximón Monihan had to reinvent himself as a DIY director who thinks outside the box. Now, having taken a road-trip across the US with his best friend, he’s realised that true success is doing what you love, regardless of reward.

Robert Boerleider steps off the plane at San Francisco International Airport looking ecstatic. For decades, the Dutchman has romanticised America as a cultural mecca and the birthplace of skateboarding. Now he’s about to embark on a three-week road trip across the country – a dream he’s held ever since his short-lived career as a skater in the late ’80s.

Fast forward three days and Boerleider is staring dumbfounded out of a car passing L.A.’s notorious Skid Row, watching police harass homeless people in makeshift shacks. “So this is the other side of the coin? The ones who didn’t make the cut for the American dream?”

You can practically see his image of the country begin to crumble. But that’s what you get when your guide is Maximón Monihan, Thrasher magazine’s ‘Most Hated Skater of All Time’ (a joke title), who’s eagerly rubbing “the American nightmare” in his face. 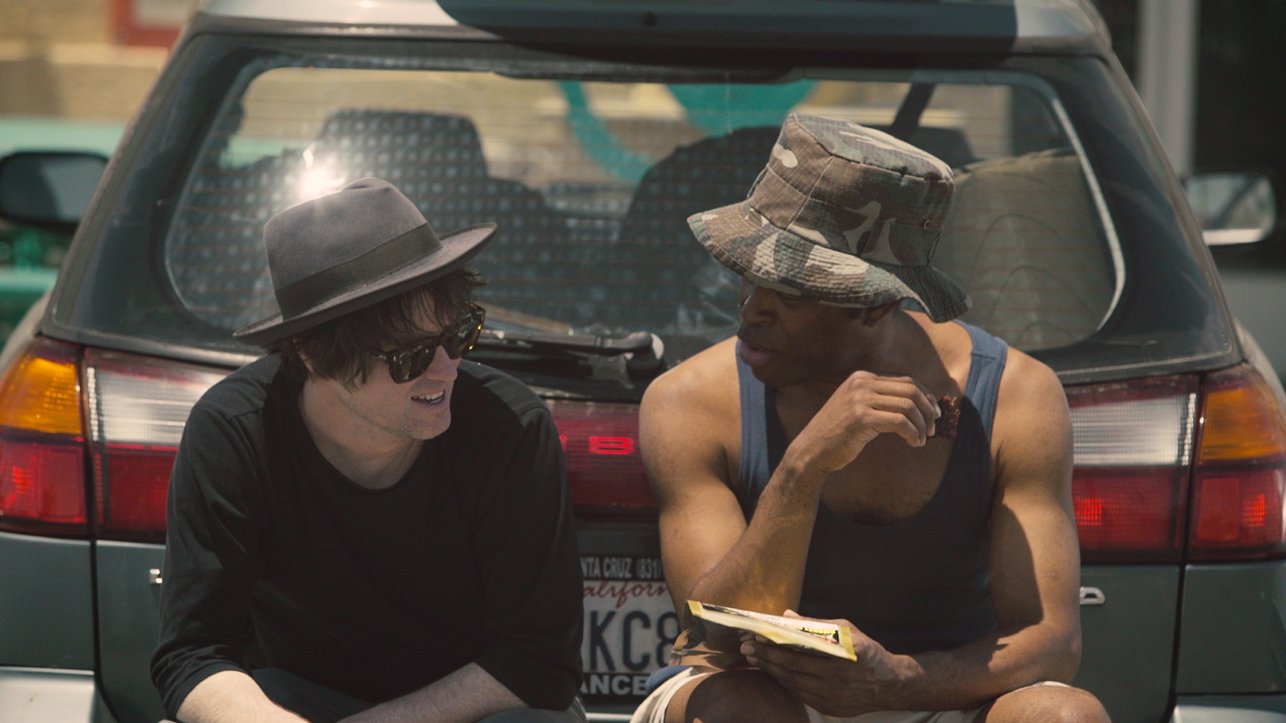 Maximón Monihan and Robert Boerleider in Sea to Shining Sea.

This is how Sea to Shining Sea gets going. It’s a road movie about two washed-up, middle-aged skaters – one white, one black – navigating a confused and conflicted America in a beat-up Subaru. Blending documentary and fiction, it’s the second ultra-low-budget feature from Monihan’s ‘subterranean filmmaking collective’ Bricolagista! – the perfect embodiment of his decades-long journey as a shit-talking nomad.

Now 48, Monihan grew up in inner-city Seattle, where the only respite from near-permanent rain was playing in punk bands or skating in empty garages. After moving to Santa Cruz for university in 1988, he got sponsored by the legendary H-Street and appeared in landmark videos Shackle Me Not and Hokus Pokus. Then he was shipped off to conquer Europe.

“We were treated like royalty because we were Americans in the newest videos,” he remembers with a self-deprecating chuckle. “Skating was so tight-knit back then that you could find any skater and they’d let you crash, show you all the spots.” 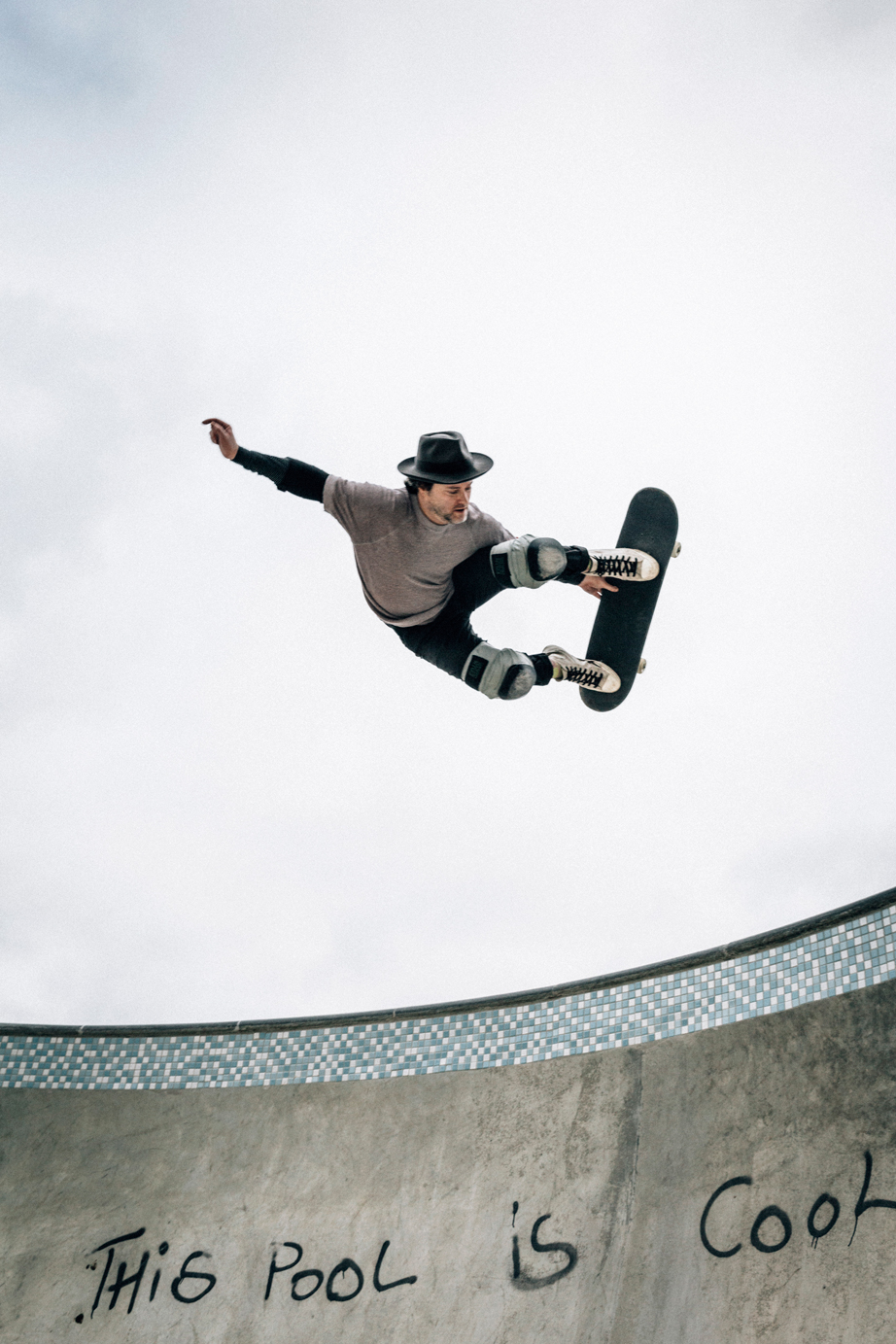 At a halfpipe contest in West Germany, Monihan met Boerleider, who was also sponsored – despite being an uncoordinated jokester who finished last in almost every contest. Although he failed to leave a mark on skateboarding history, nobody who passed through the European scene in the late ’80s could forget his gift for clowning. He became best friends with Monihan, whose own skate career ended when vert became passé.

“I remember that moment perfectly,” he says of being dropped by H-Street. “‘You’re not doing the modern tricks and you’ll never be as good at vert as Rune Glifberg, so we’re pulling the plug on your career.’ It’s pretty rough, having that shit taken away from you at 23. Guys got heavily into drugs, committed suicide. If you can’t do your Madonna reinvention real quick, you’re going to end up in a tailspin.”

But Monihan already had his second act planned: a career in DIY filmmaking. Using his skate contacts to hustle some camera equipment, he started writing screenplays, then branched into shooting commercials and music videos – skills he still relies on just to scrape by. “Everyone wants to make a movie, but I was just a scummy skater and there’s only one Harmony Korine,” he says. 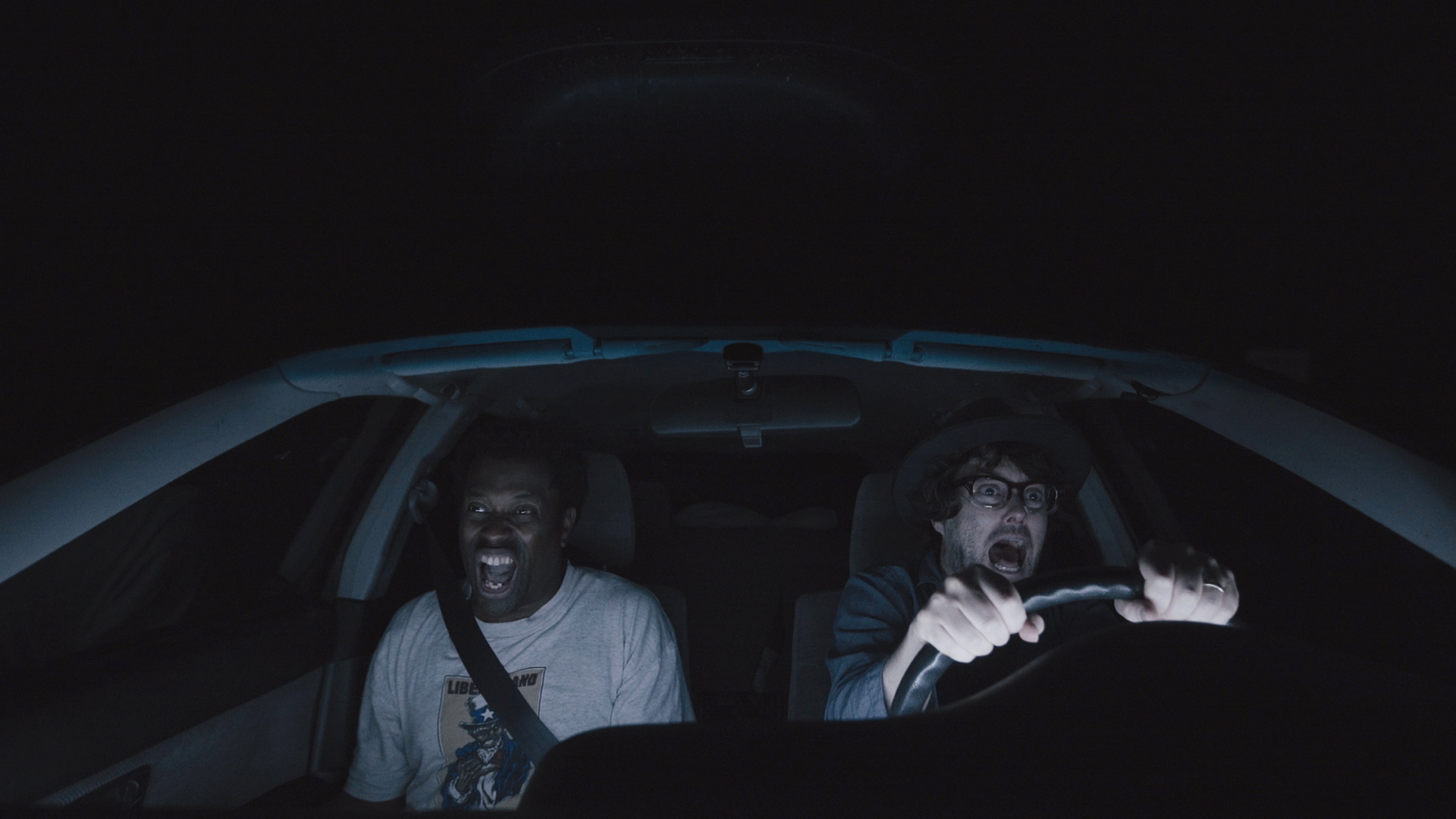 Maximón Monihan and Robert Boerleider in Sea to Shining Sea.

Monihan eventually found a car company willing to cover $10k in camera gear and travel expenses in return for a short film. He flew a small crew out to Guatemala, stretching every dollar by casting friends and pulling in favours, before shooting a feature on a budget most directors would burn through in minutes. He gradually pieced it together over long nights spent in the empty editing suites of ad agencies.

The end result, 2013’s La Voz de los Silenciados (The Voice of the Voiceless), is based on a crime ring who trafficked deaf and mute children from Central America to beg on the NYC subway at an industrial scale. Monihan crafted it as a 21st-century silent movie, with vibratory sound-design simulating the way deaf people experience the world.

“Modern day slavery, taking place in the largest city of the ‘land of the free’ – right in front of us – and nobody recognised it,” he says. “I became obsessed with telling this story to the public.” The film won awards from Mumbai to St. Petersburg, convincing Monihan that the DIY dream is worth living. 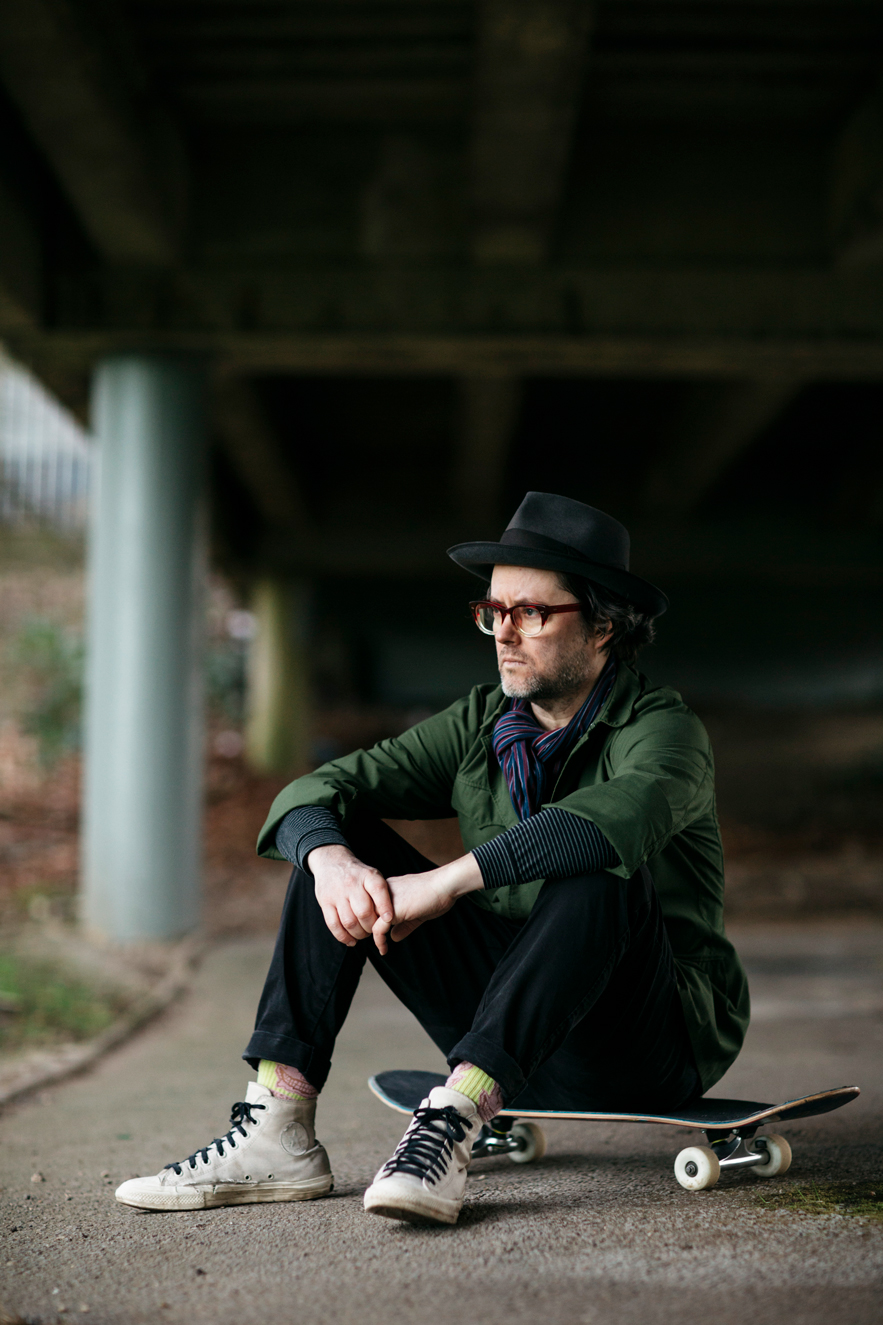 After a screening of Sea to Shining Sea at Athens’ Thessaloniki International Film Festival, it becomes clear that Monihan’s lifestyle hasn’t changed much since his skateboarding career. Wearing a fedora and large-rimmed glasses, a shot of raki in front of him, he tells the kind of vagabond tales that people nearby can’t help but eavesdrop.

These days he travels everywhere with wife Sheena Matheiken – his partner in Bricolagista! – though now it’s all about blagging spare rooms instead of couches, nerding out with fellow filmmakers rather than skateboarders.

The idea for Sea to Shining Sea sprang from a chance alignment. Boerleider had three weeks off from his job at Amsterdam airport, Monihan’s mum gifted him with her old Subaru, while streaming platform Fandor agreed to commission a short film for $5,000. But after Monihan crowdfunded an additional $13k, he eked-out a full-length road adventure littered with surreal and comic encounters.

There’s no profound or revelatory climax, but it’s heartening to see two aging friends slowly coming to terms with the idea that their greatest days may be in the rear-view. They’ve both had a chance to live out their dreams, just not in a way that either of them expected. 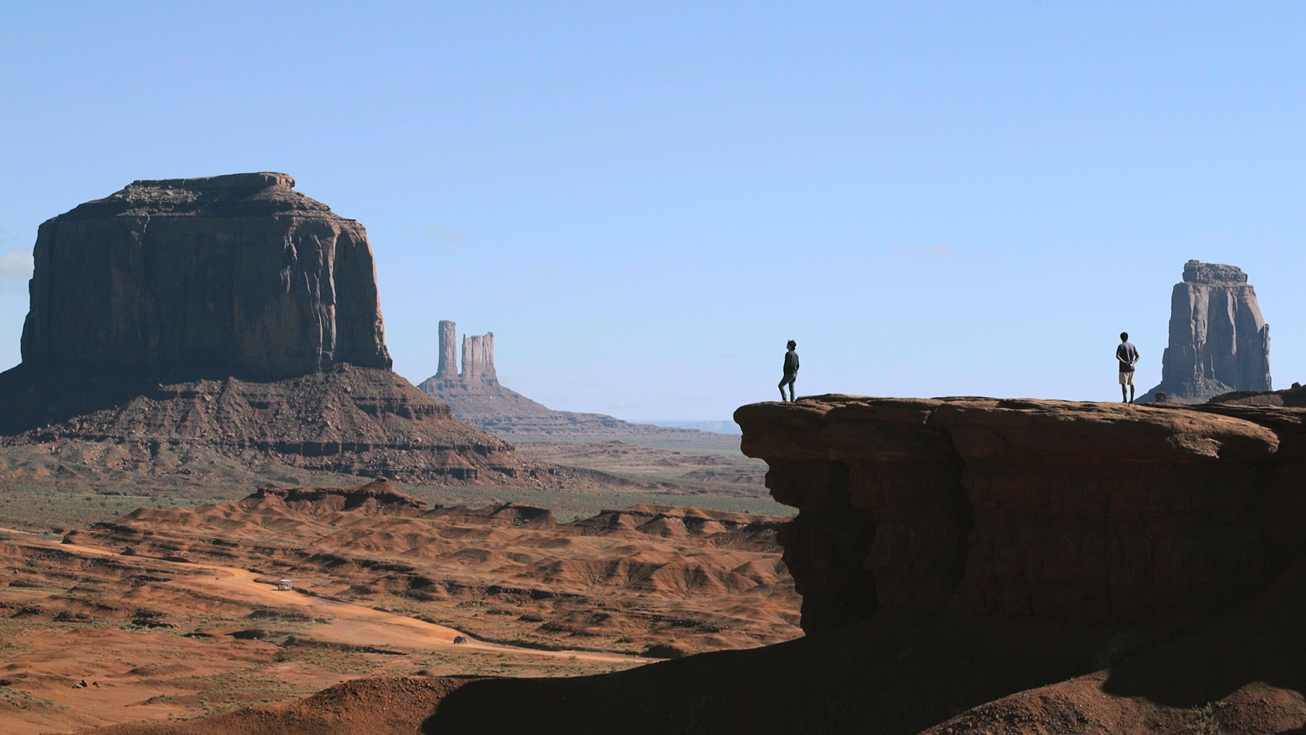 A scene from Sea to Shining Sea.

“I felt like a complete failure for years,” Monihan says. “Until your film plays in front of an audience, you’re getting older and you start to think, ‘Did I just waste my whole life with this fucking useless dream?’

“On paper, our films are flops: they never make money and almost nobody sees them. But absolute failure is not making anything at all. Making it for you, your underground world and doing it for nothing – that makes you feel invincible.”

Find out more about Bricolagista! and Sea to Shining Sea.

Linkedin
RELATED ARTICLES
OTHER ARTICLES
The past five years have seen a staggering increase in foodbank usage across the UK. Now, staff fear things are set to get much worse.
The curators of a new exhibition are hoping to shed light on Plymouth’s vibrant but often overlooked nightlife.
Over the years, a swimming hole in a city park has evolved into a magnetic meeting place for Philadelphians – a hideaway where people can connect with the natural landscape, and each other.
In her new book, the author explores the country’s housing crisis in human terms and calls for radical action to address a broken system.
The author discusses the all-consuming nature of heartbreak, and turning the experience into an incisive exploration of love and loss.
A new edition of a seminal book brings together iconic images of the band onstage in their full glory and backstage in moments of unguarded camaraderie.