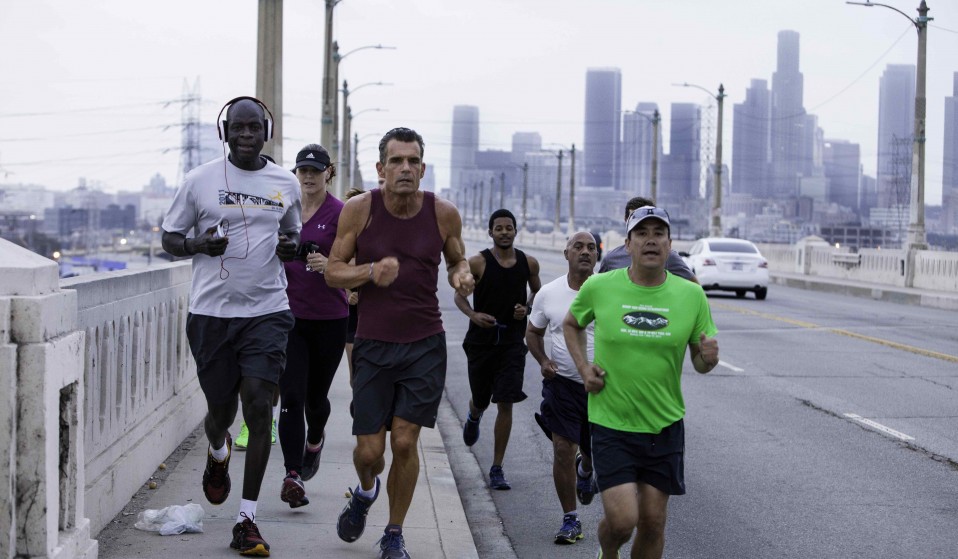 For the last seven years, LA Judge Craig Mitchell has been leading the Skid Row Running Club – a program that has helped hundreds of ex-convicts, recovering addicts and homeless people find salvation in long-distance running.

For the last seven years, LA Judge Craig Mitchell has been leading the Skid Row Running Club – a program that has helped hundreds of ex-convicts, recovering addicts and homeless people find salvation in long-distance running.

At the crack of dawn three times a week, Craig Mitchell leads a group of 30 or so runners – many of them homeless and recovering from addiction – past the tents, sleeping bags and shopping carts that make up Skid Row, the infamous 50-block area of Los Angeles that harbours 57,000 of the city’s homeless population.

The route starts and ends at the city’s Midnight Mission, a shelter with a focus on recovery and self-sufficiency, which currently houses hundreds eager to start anew (many of them recent parolees). Once the run ends, Mitchell heads to court, where he slips on a black robe for his role as a Superior Court Judge for Los Angeles County.

“It is obviously unusual,” Mitchell tells me. “Some of my colleagues look at me and sort of scratch their head. A lot of judges like to keep a very distinct distance between themselves and the people they deal with in a professional capacity. But that’s not who I am.”

Aged 62, and the founder of the Skid Row Running Club, Mitchell bears the heavy stoop of a runner of two decades, but the lean physique of a man half his age. His fitness came relatively late in life, having taken up running in his forties following years of bouncing between careers (limo driving, security and a brief dalliance with priesthood are among the colourful occupations on his CV).

After 17 years of teaching at a Catholic high school in Los Angeles, Mitchell enrolled in night classes at a local law school. He flexed his legal muscles as a criminal prosecutor in the 1990’s, before being elected to serve as a judge in 2005. He quickly became known locally as a judge with surprising amounts of empathy for those in his court, staying in contact with many of the men and women he sentenced to jail.

Spotting Mitchell’s empathy was Roderick Brown, a parolee who Mitchell had sentenced in the late 2000’s, who came to him shortly after he was released. Paroled into the care of the Mission, Brown invited Mitchell to one of his sobriety classes to participate in his recovery. While there, Mitchell was asked to contribute ideas for aiding the recovery of more of the Mission’s residents. That’s when the running club was born.

What began as an early-morning ritual for five or six of the residents quickly blossomed into a recovery programme in and of itself. In its seven years of existence, the Skid Row Running Club has assisted in helping hundreds of men and women improve their mental and physical health and re-enter society after years of addiction and incarceration.

Mitchell describes running as “cheap therapy” and a major asset to his own physical and psychological well-being – something that he believed would be helpful to others in search of purpose back in 2011. 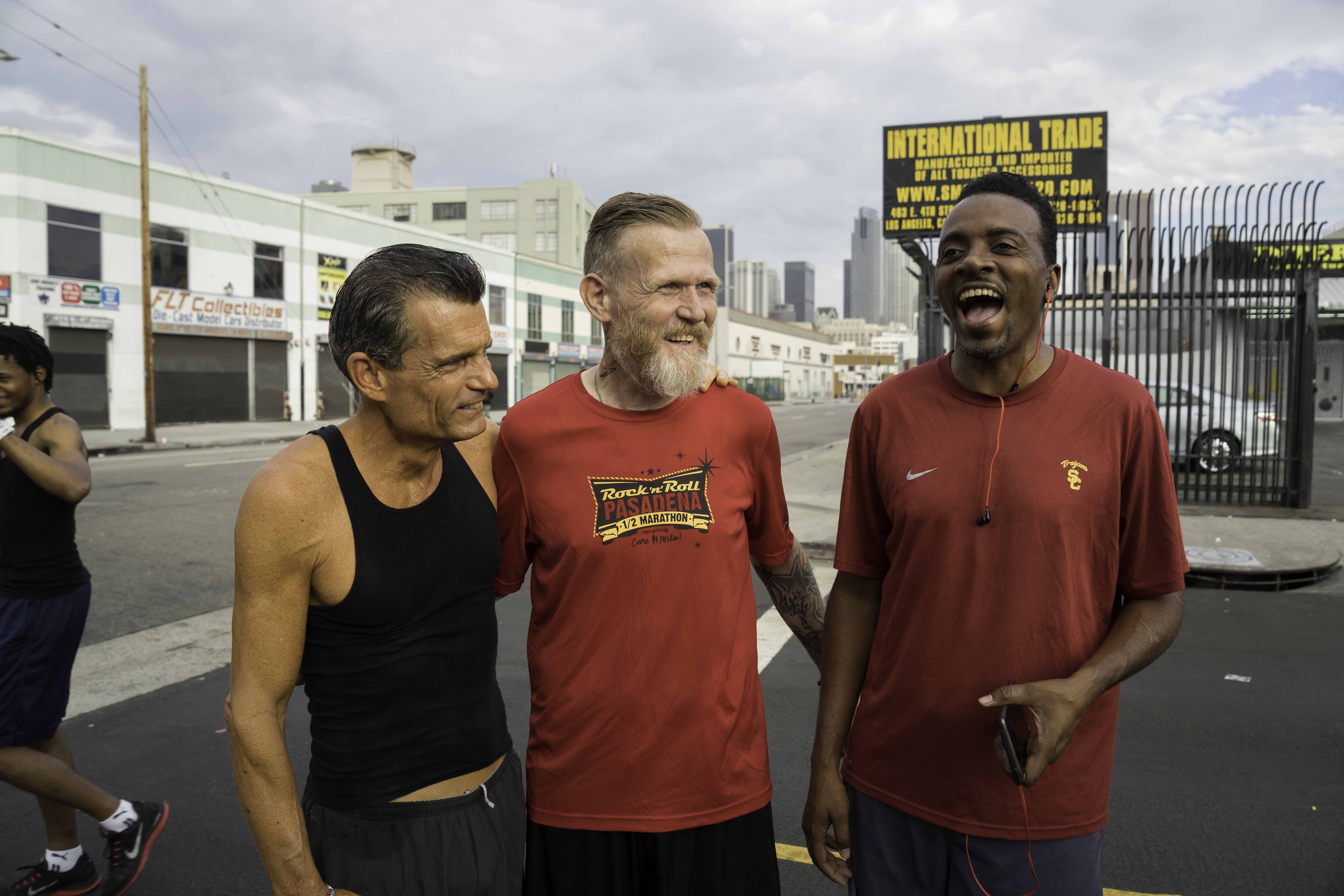 “People who are addicts, who are homeless, who have criminal histories – they’re not proud of where their life has gone,” he explains. “They’ve often been rejected by family, relationships have collapsed, employers don’t want anything to do with them – so they don’t feel too good about themselves. And in order to venture out there, and take the risks that are necessary to succeed professionally and to succeed in relationships, you need some level of self-esteem, or self-confidence, and that’s critical.”

“For so many of the people who are on Skid Row, it’s been a long time since they’ve had some significant successes in their life. So then to work in a programme that trains them to get ready to run 26.2 miles and then to do that as a collective, where you’ve got a lot of people who care about you or are rooting you on – that is a phenomenal feeling.”

Mitchell and his running club are now the subjects of a new documentary, Skid Row Marathon, which follows the journeys of several of the Mission’s residents, along with Mitchell’s own work alongside it.

In the film, Mitchell’s wife Juliet, with whom he has three children, suggests that her husband’s involvement with the club works as a “counterweight” to his work on the bench – an occupation largely guided by federal sentencing guidelines that he often struggles with. Mitchell says that he agrees with his wife’s assessment.

“Much of what I have to do in the courtroom setting is punitive in nature,” he explains. “And what I do in the running club is restorative. It’s encouragement, it’s constructive.” 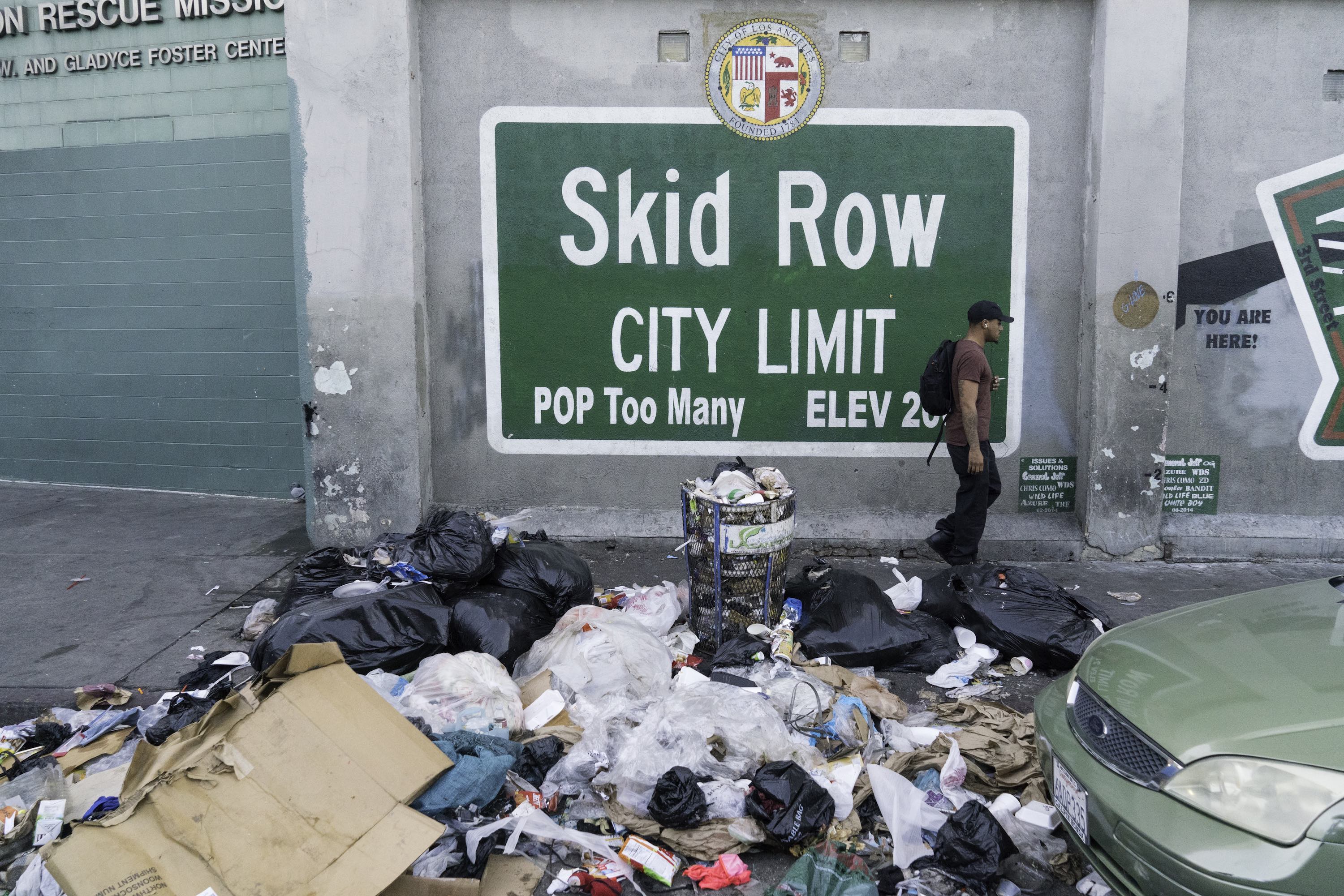 He’s not motivated by guilt, he says, but adds: “There is a weightiness, or an acknowledgement that your decisions play out and define a person’s life in a way that you or I wouldn’t want our lives to play out. Obviously, if someone murders somebody or someone rapes or sexually assaults another person, I understand what I do is necessary, that that person for at least a period of time needs to be removed from the larger community. But I also have no delusions. I have been and continue to visit some of the worst prisons in our state, and I know where I’m sending the folks that I sentence.”

Mitchell credits his empathy to his late mother, a politically-minded woman who succumbed to a terminal illness when Mitchell was 10 years old. Told by doctors that she would have just six months to live, Mitchell’s mother ended up living for six years longer than anybody expected, determined to use the time she had left to instil a strong social consciousness in her children.

“We came essentially from a Roman Catholic and Presbyterian combination [family], but she made sure we went to Mosques, we went to Jewish Synagogues,” he remembers. “We tried to experience the diversity of Los Angeles. It was all part of her plan, to condense what normally would have been 18/20 years of parenting into a very brief period of time.”

Today, both Mitchell and the Mission help finance the running club, paying for kit and overseas trips themselves. They’re joined by public donations and investment from Los Angeles professionals, including business owners, lawyers and executives, who also join in with the runs. The Mission assists further with helping find employment, housing and educational opportunities for those recovering within their walls. 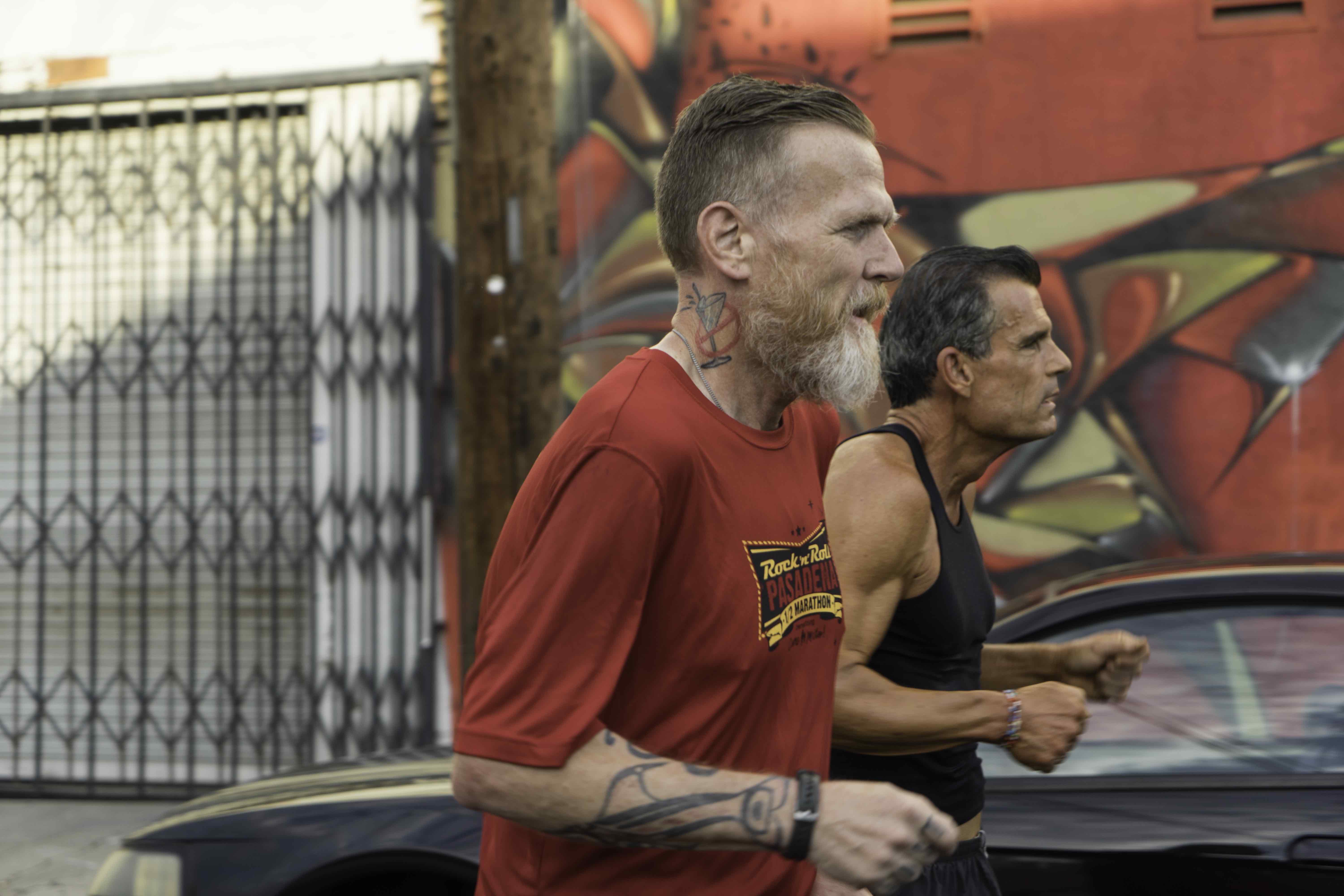 Among the recovering individuals featured in Skid Row Marathon are Ben Shirley; a former bassist for the punk band U.P.O., who dreams of studying at the San Francisco Conservatory of Music, and Mody Diop; a Senegalese former academic attempting to remain sober while managing a luggage store, a venture enabled by a mentor from the running club.

“We’re a running club, and that is sort of the hook and what we do together, but on a much more important level it is a community,” Mitchell says. “It’s a group of folks that on any given day can break off into smaller groups. Friendships form – it’s the network that collapses often times when a person becomes a captive of their addiction. So to rekindle that and rebuild that structure within a person’s life is necessary if one is going to get off the street.”

Thanks in part to the documentary, Mitchell says that he now regularly receives calls from charities and 12-step programmes in other US states enquiring about setting up their own running clubs. He also speaks highly of the Manchester and London-based organisation The Running Charity, which provides fitness programmes and kit for homeless and disadvantaged youth between the ages of 16 and 24. 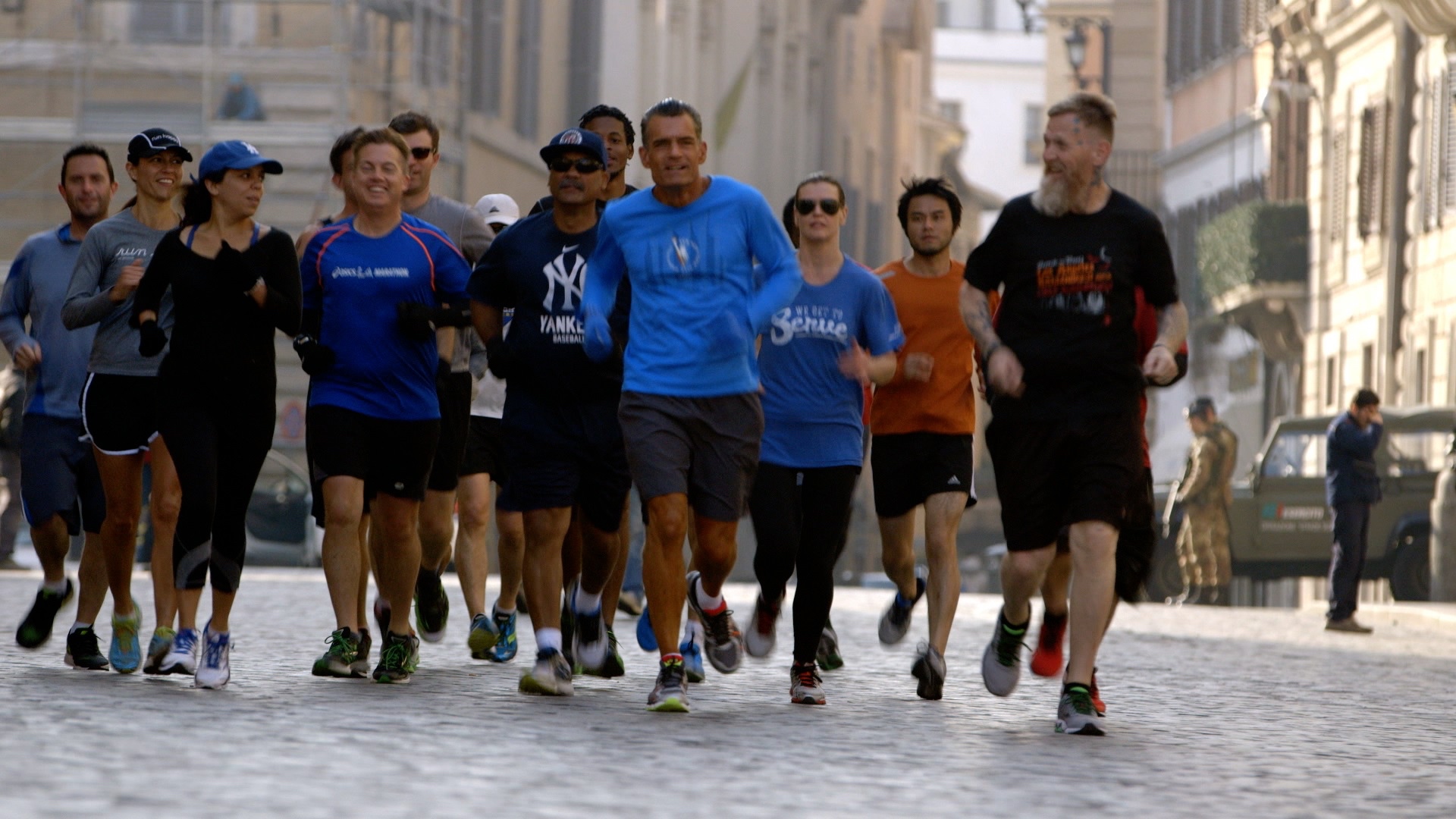 As for his group’s own work, they’re about to hold a meeting to decide what country they want to travel to next. Since 2013, the Skid Row Running Club has participated in several overseas marathons, from Ghana to Rome to Vietnam. Their last marathon, held in Jerusalem, saw 44 runners from the Mission taking part, and Mitchell hopes the next journey will involve even more.

“As soon as we got back from Jerusalem, [everyone was asking] ‘Where are we going next year?’” he says. “It’s a powerful incentive to keep these guys on the straight and narrow. A good number of our runners have never been on an aeroplane before, so it’s like watching kids on Christmas morning, them entering the airport with their luggage, ‘Oh my god, this is really happening!’”

But that’s next week’s agenda. Right now, Mitchell’s mind is elsewhere. The morning of our phone call, Mitchell met a young man named Joshua while at the Mission, and knows exactly how to help him.

“He wants to join the running club, so I’m gonna get him a pair of shoes and I’m going to have those shoes ready for him on Monday.”

Judge Craig Mitchell completed his 74th Marathon at the first London Marathon of his running career on behalf of The Skid Row Running Club, The Big Issue and The Running Charity. Donations can be made at on the official GoFundMe.

Linkedin
RELATED ARTICLES
OTHER ARTICLES
In the latest OFFF Dispatch, the enigmatic designer dives into his process, connecting the dots between his unique and varied creative output.
The situation in Afghanistan remains dire, with many groups facing persecution at the hands of the Taliban.
Following the release of his newly republished 1991 book, Redheads, the American photographer reflects on his celebration of ginger people and their magnetic power.
The government’s failure to take long Covid seriously has led to the formation of a group campaigning for the thousands of forgotten victims of the illness.
In the last of our dispatches from OFFF Barcelona, Rufus Deuchler and Vincent Gault discuss the future of creative process.
Our new magazine is here, starring the inimitable Mitski. Order your copy now and join us on a trip around the world.