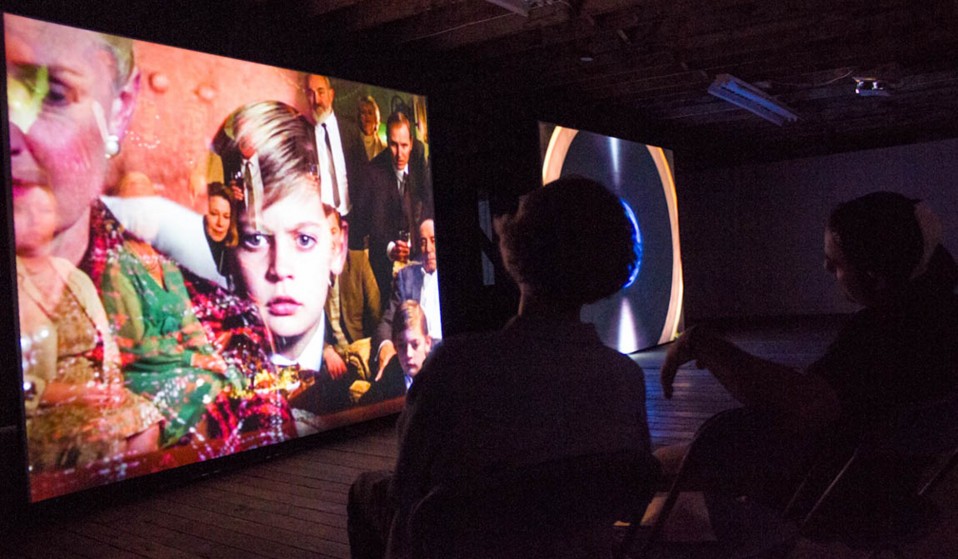 This two-sister collective are sampling everything cinema, blending characters and narratives together to talk politics, death, and everything in between.

This two-sister collective are sampling everything cinema, blending characters and narratives together to talk politics, death, and everything in between. Oh, and they don't give a shit about copyright law either.

Listen – everyone who has an internet connection and is alive today has, at least once, downloaded something they probably shouldn’t have. And even though we’ve moved on from those terrible anti-piracy ads of the early 2000s, it’s still general knowledge that obtaining copyrighted media via alternative routes is, indeed, a very naughty thing to do.

But the sisters behind the art collective Soda_Jerk have never been ones to let these rules and regulations phase them, much.

In fact, since 2002, Soda_Jerk have been using carefully selected snippets and cuts of well-known films, TV series, music videos and documentaries to tell brand new, mostly surreal stories. Effectively they repurpose the recognisable images and characters featured in these films and create something new, re-signifying the past and offering a fresh perspective on a variety of topics – including life, death, identity, the future… and even copyright law itself.

In one of their early works, Hollywood Burn, we see Elvis fighting for the people and for free-culture against an all-powerful tyrannical Moses intent on protecting and defending the ten commandments of copyright law. Yes, actual Elvis. In another, Judy Garland as Dorothy in The Wizard of Oz encounters her older self after going through rough years of adulthood.

With their format, anything is possible.

“If we were to think film as a kind of communication, it would resemble a form of cipher,” they explain from their Brooklyn studio. “What interests us is not so much the narrative communicated by a film, but rather the infinitely dense matrix of hidden meanings, associations and histories that are encoded within it.”

“Like the way that the socio-political context of the era leaves traces within the style and content of the film, or the personal or collective memories that emerge from the viewing of a movie, or even the way that film registers the passage of the ageing body in front of the camera.”

A clear example of this is their Astro Black work – a multi-channel video cycle composed of four episodes informed by 90s Afrofuturism, which will be shown at the Barbican Centre’s upcoming Science Fiction exhibition, Into the Unknown. Starting the narrative from the ideals of cosmic jazz musician Sun Ra, who claimed he was born on Saturn, the duo samples sci-fi to talk about social politics, going from the 1940s through Public Enemy fighting the power, until today.

It’s clear to see that for Soda_Jerk, no film is just a film – it doesn’t matter if we’re talking Ace Ventura or 2001: A Space Odyssey. Because the two sisters recognise each and every piece of media as a product of many different aspects of the world it was brought into, everything is a possible reference, a sample. It’s surprising they are not constantly overwhelmed.

“The way we log samples is a sprawling shit-show of hard drives, scrapbooks and project maps scrawled onto studio walls,” They tell me. “But mostly our strategy has just been to amass as many sources as possible so that we can dig back into our ever-expanding archive as we need to.”

The same way culture isn’t set in stone, neither is the sisters’ research and creation process. Starting from an initial theme of interest, each piece is in constant development and expansion for the several years they take to be finalised, with history and structure working together in what they describe as an “improvisational feedback loop”.

The reference makes sense, considering their artistic origins lie on the Sydney electronic music scene. Surrounded by the experimental hip-hop sampling of the early 2000s, their approach to film developed directly from the source of remix culture.

But while remixing might’ve been unusual then, it is now pretty much the norm. You just have to look at internet memes – repurposed images taken out of their original context to gain new meaning – that are circulated all over the world. Remixing is what happened to Pepe The Frog when he became an alt-right icon.

“On one hand this situation has dealt a final deathblow to the concept of grand narratives and sanctioned histories,” Soda_Jerk say of the new remix landscape. “But the recombining anarchy of the internet has also created obstacles for traditional ideas of political advocacy and intervention.”

It’s also important to consider how politics plays into Soda_Jerk’s creative process: are they activists?

“We do identify as artists and activists, often but not always at the same time,” the sisters say. “As an illegal practice, our work is intended to unsettle systems beyond those of the art world, while our conceptual motivations pivot on issues relating to social politics and cultural history.”

Although they recognise that some people might not see the connection between political art and recycling popular culture, Soda_Jerk would say the relationship between the two is pretty clear, especially when we have a reality show host leading one of the biggest modern empires.

“As the current political situation has made crushingly obvious, mainstream image culture is a principal substrate of contemporary politics. We feel that being able to translate, transform and circulate images has never been more politically important than it is at this moment.”

You can see Soda_Jerk’s Astro Black at Into the Unknown: A Journey through Science Fiction at the Barbican Centre 3 June – 1 September 2017.

Linkedin
RELATED ARTICLES
OTHER ARTICLES
Financial turmoil is pushing people who work in the sex industry into more dangerous and desperate situations as a means of survival.
Birdy Chu reflects on documenting the historic moment in which the territory was formally passed back from the UK to China.
Demonstrators gathered outside of Parliament to voice their concerns about the monarchy and the crackdown on dissent.
The idea that a younger generation is abandoning work has become a popular narrative online, but it doesn’t necessarily reflect reality.
As the Scottish government announces a rent freeze, an activist with Living Rent who fought and won shares how they did it, and what must come next.
Rhiannon Adam spent three months capturing an ageing society wracked by division, isolation, and the aftermath of scandal.