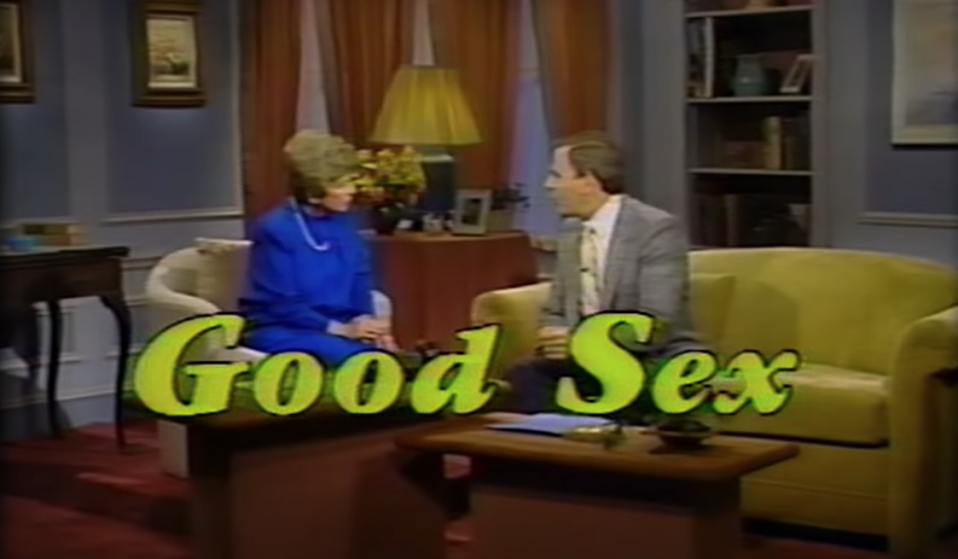 Throughout the ’80s and ’90s, filmmaker Ryan White learnt some of his earliest lessons about sex from a tiny, Jewish psychologist in her mid-50s with a thick German accent and a titillating disregard for anatomical prudishness.

The darling of radio call-ins and television talk shows, Dr Ruth Westheimer was a powerhouse of sexual literacy, renowned throughout the country as much for her liberal use of the words ‘penis’ and ‘vagina’ as she was for her diminutive 4’7” frame. Though she’d largely receded from view with the arrival of more sensationalist TV personalities like Jerry Springer in the early ’00s, when White got a call from a producer asking if he’d like to go to dinner with Grandma Freud, he jumped at the chance.

Arriving at an empty restaurant, Dr Ruth leapt out of her chair, yelled his name – “she rolled the ‘r’ for like a minute” – and began quizzing him about his work, his interests and, as might be expected, his relationships. White was completely enamoured, as was Dr Ruth. Despite having previously refused to make a documentary about her life – and despite the fact that White already had two other docs in production – the duo agreed to start work on Ask Dr Ruth. What results is a film that perfectly captures the energetic frenzy, boundless charity and unbridled joy of its nonagenarian subject. Ask Dr Ruth presents a tender character study of a beloved revolutionary, queer advocate and sex-positive pioneer.

Ahead of the documentary’s European premiere at Sundance London on June 2 – the film will release with Lionsgate later this year – we caught up with White to find out more about making this film during the height of the #MeToo movement, what it’s like talking to a 90-year-old about her sex life, and why Ask Dr Ruth was the project he needed after his Emmy-nominated The Keepers.

Dr Ruth is in her 90s now, and she’s refused to film documentaries before. Why do you think she agreed to let you tell her story?
I don’t want to speak for her, but I think she felt like it was time. Part of the power of documentary filmmaking is leaving a legacy for your family. [Ruth is] very protective of her children and grandchildren – she’s always said, ‘I’m famous for talking about orgasms and erections, and I don’t want them to be tied to that reputation, whatever they do in their professional and personal life, I want them to have their privacy’. I got to meet one of her granddaughters after she saw it, she said ‘thank you, it’s been so hard to know about my grandma’s life because she doesn’t like to talk about it, this documentary will be really special for me and my children’.

You and the crew become a character in this story, Ruth is always asking if you’re well fed. Did she ever ask you questions about your relationship? Did it ever devolve into a therapy session?
I would often hear the line during the making of the film, ‘I’m the therapist, you’re not the therapist’. That was her defence mechanism when I would try to probe to some heavier issues. That was her line to shut me up.

She says we’re friends for life now, we talk all the time. If you had asked me in the ’80s, when I was growing up, if I thought one day I’d be really close with Dr Ruth, I could never have conceived of it! She was an old lady to me when I was a little kid – she was as famous as you could be. But I really can say Dr Ruth is a close friend of mine. Hands down I talk with her on the phone more than I talk to my own boyfriend or my mum.

You’ve said she’s a very private person despite it all. Do you think this film plays into a wider debate about whether it’s possible to divorce the person from their work? She’s a very different type of celebrity.
It’s almost refreshing in a way, to get to work with a celebrity who’s not interested in their public persona. We live in a social media world, where everybody is presenting in some way. Not just famous people, even regular people. I don’t know if it’s a generational thing: she’s been alive for so long, she’s lived through so much, she became famous so late in her life which is inevitably part of the reason she’s so humble and down-to-earth.

I think the most surprising thing about Dr Ruth is that she virtually never talks about sex. It’s not that interesting to her outside of a professional setting, especially her personal sex life. People forget she’s also a relationship therapist. So much of her television shows or radio shows were geared around not just sex, but around romance, intimacy, finding a life partner. I think that interest in everybody finding a life partner comes from the fact that she lost every close relationship she ever had. She had to rebuild her family, she was literally the only survivor. The sex therapist came from the relationship therapist, who came from a girl who lost all her relationships in life and who spent her life trying to build connections for people. 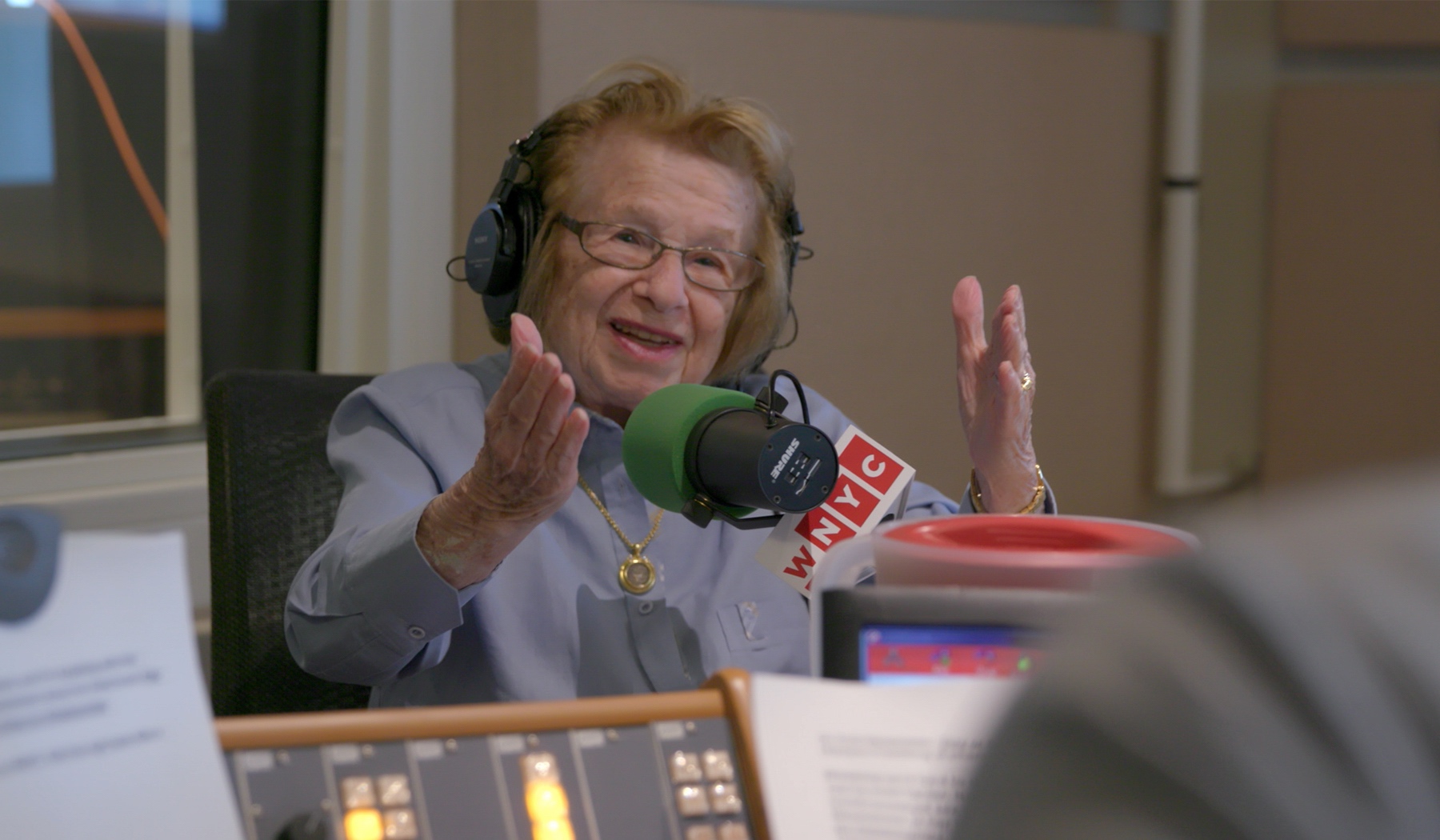 Did spending that much time with her change the way you think or talk about sex?
We were making this film during the height of the #MeToo movement. Harvey Weinstein was breaking and every HR department around the US and probably the world was so super conscious about not talking about sexuality within the workplace. Suddenly we’re making a film where – from morning until night – we were talking about orgasms, erections, semen. It was the strangest cultural outlier. It taught all of us that sexuality is not dirty, it’s only dirty when you pervert it.

Before we made Ask Dr Ruth we were working on a documentary called The Keepers – it’s about the worst parts of human sexuality. It was very dark and upsetting. It was a painful but necessary thing to talk about. Working on Dr Ruth was the pendulum swinging from the darkest parts of human sexuality to the healthiest. It was a life saver in a lot of ways for me and my team: Dr Ruth came into our lives, a ray of sunshine who taught me sexuality is not a big deal and it should be pleasurable, consensual, and propel relationships not tear them apart. It totally changed the way I talk about sex, the way I think about sex. I got to work with the world’s most renowned relationship therapist for a couple of years, for free! And I ended the movie with a boyfriend! Something worked! I quietly took advantage of all those nuggets of advice I got over time. She really did teach me a lot about my own relationships.

How do you want people to think about Dr Ruth after watching this film? What do you hope they’ll take away from it?
Dr Ruth is underappreciated as a forerunner of so many parts of the sexual revolution. We live in a society where sexuality is still seen through quite a puritanical lens. Her stances on many of those issues challenge the status quo, even today. Mostly I just want people to go see the film and get a taste of what it’s like to have Dr Ruth in their own lives. You get to watch all the shit that she went through and she still became such a ray of light – probably the most optimistic person audiences will ever meet. That makes it an incredible survival story. It made me look at my challenges and hardships through a different lens, and I hope audiences can share that too.

Ask Dr Ruth will be released by Lionsgate later this year.

Linkedin
RELATED ARTICLES
OTHER ARTICLES
Photographer David Corio’s archive offers a glimpse inside a revolutionary era of music and nightlife.
By turning a real-life crisis into daytime television fodder, TV bosses have once again shown themselves to be completely out of touch with audiences.
Yesterday thousands gathered outside Buckingham Palace after news of the Queen’s death broke.
Ahead of the release of their first collaborative album, the producer and rapper talk psychedelics and the state of UK hip hop.
Birdy Chu reflects on documenting the historic moment in which the territory was formally passed back from the UK to China.
Rhiannon Adam spent three months capturing an ageing society wracked by division, isolation, and the aftermath of scandal.