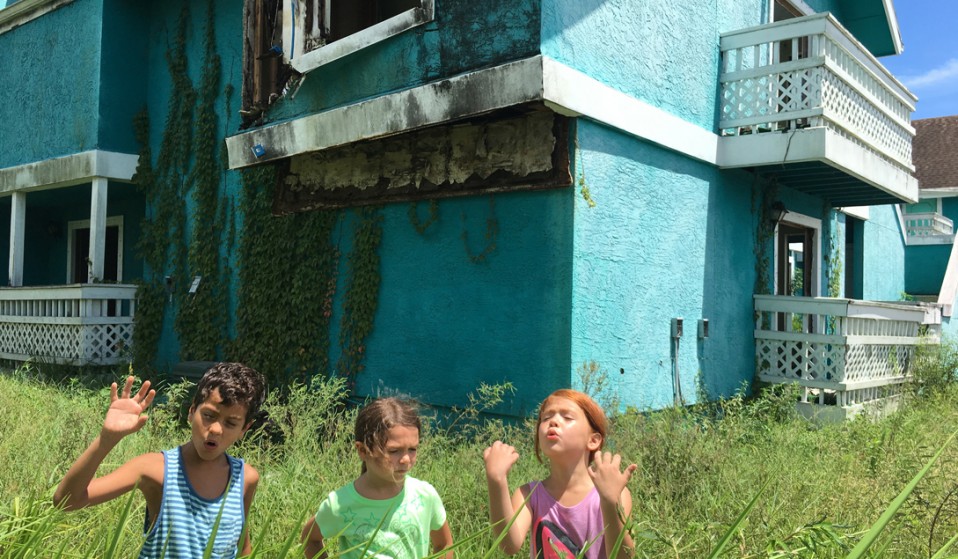 Sean Baker has developed his own cinematic language: one packed with colour, energy and humour. But after years on the fringes, consistently bold work has cemented his status as a socially conscious voice in Hollywood.

Sean Baker has developed his own cinematic language: one packed with colour, energy and humour. But after years on the fringes, consistently bold work has cemented his status as a socially conscious voice in Hollywood.

Sean Baker is not a conventional director. He can shoot a film entirely on an iPhone. He’s willing to cast unknowns in lead roles. He tells stories that mainstream cinema largely ignores.

Ever since 2000’s Four Letter Words, which tapped into the psyche of young suburban men, Baker’s work has been a DIY enterprise – made with shoestring budgets, improvised schedules and inexperienced performers. It’s allowed him to foster intimacy and compassion around delicate subjects: illegal Chinese immigrants (2004’s Take Out), Ghanaian street sellers (2008’s Prince of Broadway) and  transgender sex workers (2015’s iPhone opus Tangerine).

The latter proved to be a landmark moment not only for low-budget movies and trans representation, but for Baker’s career. Its humanist but lighthearted tone swept him in from the margins and saw him heralded as a new voice in contemporary cinema. 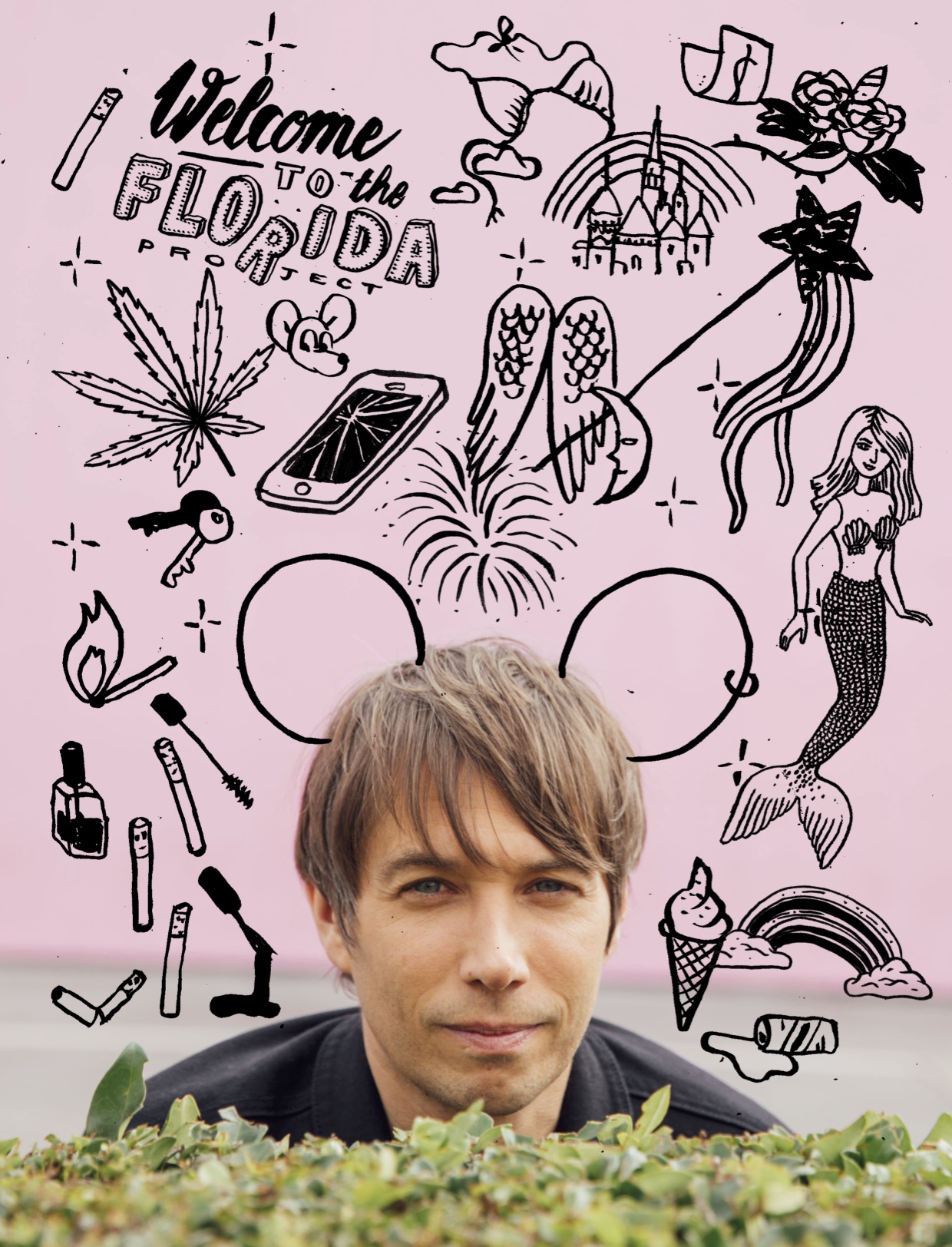 But The Florida Project represents an even bigger breakthrough. Set in the Magic Castle Inn, a bright purple motel on the outskirts of Disney World, its community of extended-stay guests exist at a cross-section between fantasy and reality. It’s a place where parents may be trapped by economic hardships, but their children run riot in their own imagined version of the famous holiday resort.

Baker’s own imagination was stoked by a fanaticism for film at an early age. Growing up in New Jersey, with a teacher for a mother and a patent-lawyer for a dad, he became obsessed with homemade movies – a path that eventually led him to study film at NYU’s Tisch School of the Arts.

Nearly 20 years later, Baker has doggedly stuck to the same values – and they’re all present in The Florida Project, despite its bumper budget. Years of research were invested in it. He spotted one of the lead actors on Instagram and recruited another in a local supermarket. He insisted on retaining final cut and edited the movie in his bedroom over a long run of late nights. (This is the first film he’s made without a relationship collapsing in the process.)

Today, despite a hectic morning of media commitments, Baker picks up the phone at his bungalow in West Hollywood and settles into a manner that feels emblematic of his work: thoughtful, gentle and keen to put the stories of his subjects before his own.

There is a literal glow throughout much of The Florida Project. Is it a metaphorical sheen that reflects the good of people shining through in tough times?
The way that poverty is generally tackled in a movie… I think what often happens is that you have an exercise in miserablism. It’s not realistic; it doesn’t treat characters as humans. I wanted to focus on the joy of childhood and that is universal, no matter what your backdrop.

So there is that glow, there is that positivity because at that age children still have that inner resilience and just a simple sense of wonderment and imagination. We really wanted to bring people back to the summer of their youths, in a way, so that they would identify with Mooney [played by Brooklynn Prince] and her friend. That needed to be done in a way that was light and fun because hopefully when you look back on your own childhood, you do remember those moments of pure bliss and joy.

Was your childhood bliss and joy? And where does this empathetic nature come from, do you think? Was there a specific moment in your life that led to it?
That’s one of those questions that is hard to answer. Maybe I’d need a psychoanalyst to chime in but my parents were wonderful people; very ethical. They brought us up in a way that made us aware of how lucky we were; they made us have empathy for others.

When I made my second film, Take Out, we [Baker and co-director Shih-Ching Tsou] really wanted to shed a light on the struggle of undocumented immigrants because we lived above a Chinese restaurant and we watched these men making deliveries on a daily basis. They were basically paying off a smuggling debt and we were watching them work incredibly hard just to stay in our country. That kind of thing sticks with you. And I guess I’ve come across issues and subjects where I feel that simply shining a light on them can only make the world a better place. 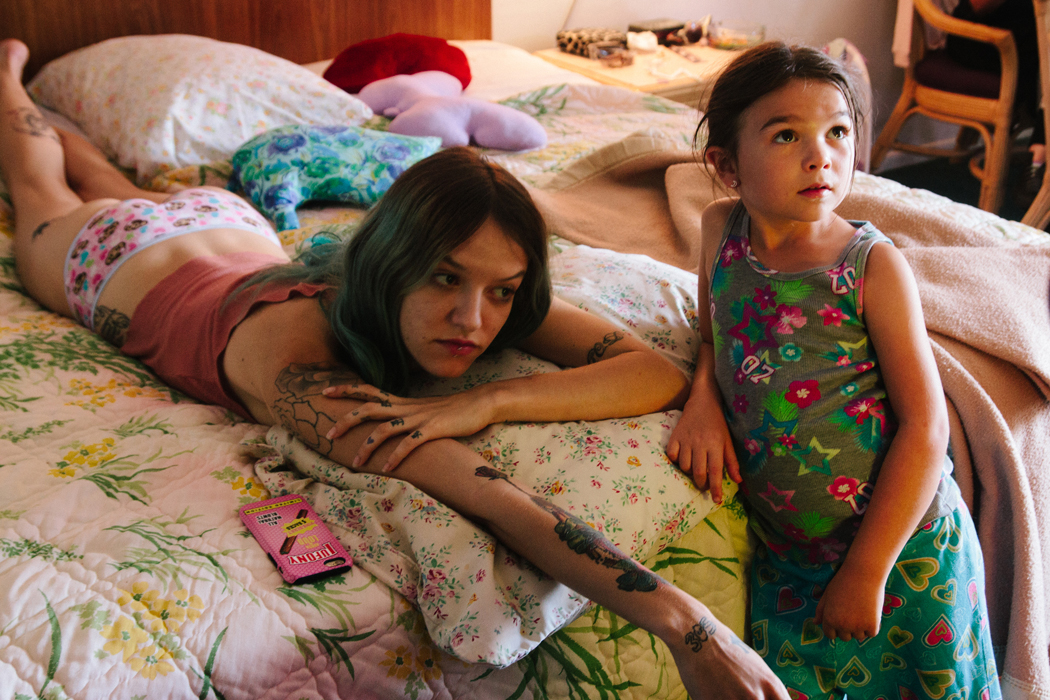 Do you consider yourself to be a political filmmaker and for this to be a political film?
Yes, I do. To tell you the truth, British social realism has had an incredible impact on my career, the films of Ken Loach and Alan Clarke especially. But there is definitely an issue that is being addressed here.

The most important part of this film is shining a light on the hidden homeless in the United States and the fact that we have families, individuals and children using budget hotels as their last refuge before having to resort to the streets.

Is contemporary American cinema lacking in political bite?
I don’t feel like I see enough of it going on in mainstream cinema and TV. I consider Moonlight a political film. I think Jordan Peele (director of Get Out) made an incredible achievement. He made a social thriller using a genre film to reach mainstream audiences and spark a discussion on race issues. So some of my peers definitely are doing it and I just want to be a part of that.

Do you think people have reached a point where they are becoming more engaged by politics? Or do they seem exhausted by it?
I think people need it but, at the same time, you have to be aware that there are audiences out there who don’t want to be preached to; they don’t want to be hit over the head and feel like they are having a call-to-action imposed on them.

We have social media providing us with news 24/7 and a lot of it is not exactly positive; we live in heated times and in a divided country; we have natural disasters and mass shootings on a near-daily basis at this point. I think audiences do need and desire escapism, but they are looking for sophisticated escapism. They don’t want complete fluff. They want to think. 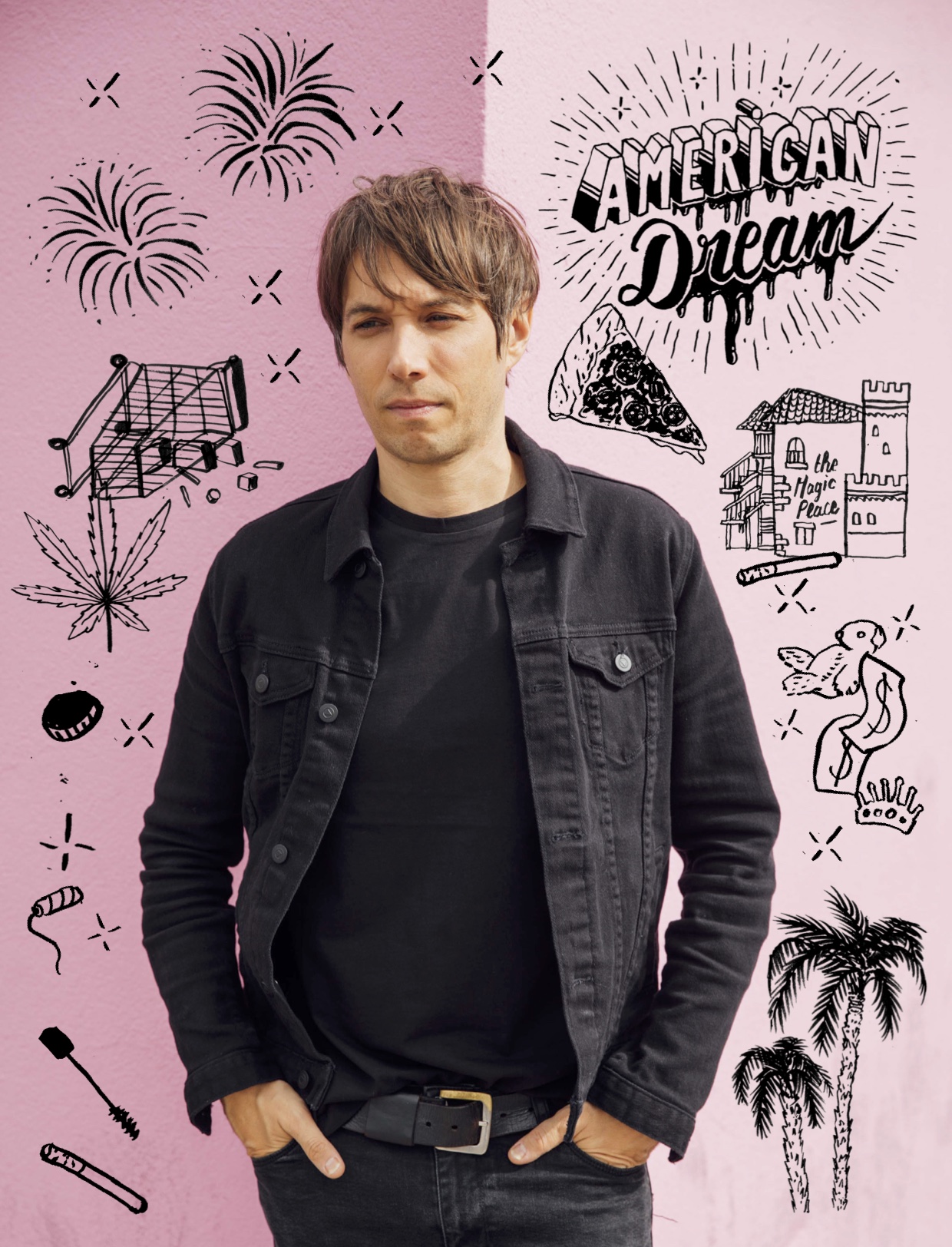 This film feels like it explores the notion of the American Dream as this crumbling yet once universal fantasy. What are your feelings on the American Dream as an ideal?
That’s a big question. All of my films have something to do with the people left behind by the American Dream, living on the outskirts. These days, unfortunately, materialism has really taken its place. It’s more about success and image and money and consumerism. I think those who are the unfortunate by-product of that are the ones who are then forced to live in the shadows of it. The American Dream is a different thing these days. I think you can see, based on where the election went, where people’s heads are in terms of what they consider success – and that’s a very sad thing in my eyes.

You had a $2M budget for this film – a huge leap from making Tangerine on an iPhone. Does having more money to play with bring more challenges?
It was incredible to be working with more money. That’s always a good thing for a filmmaker because you have more tools to work with and more time, but your ambition becomes greater too. So you’re almost in the same situation because you’re always still struggling for more money and more time. You’re also trying to keep the aesthetic that comes from more intimate filmmaking. That becomes an issue when you’re working with a bigger union crew and you have bigger responsibilities to financiers.

So I think the challenge was to still try and deliver what I’ve done in my previous films, which I guess people have taken to for capturing a slice of life in a docu-style way. It’s tougher to do that with more control because everything has to be planned out and scheduled. Those moments of happy accidents that you were looking for and relying on, they don’t come around as easily because everything is too structured. So it’s a case of fighting against the machine… but I’m the one who is benefiting from the machine as well, so it’s a catch-22. 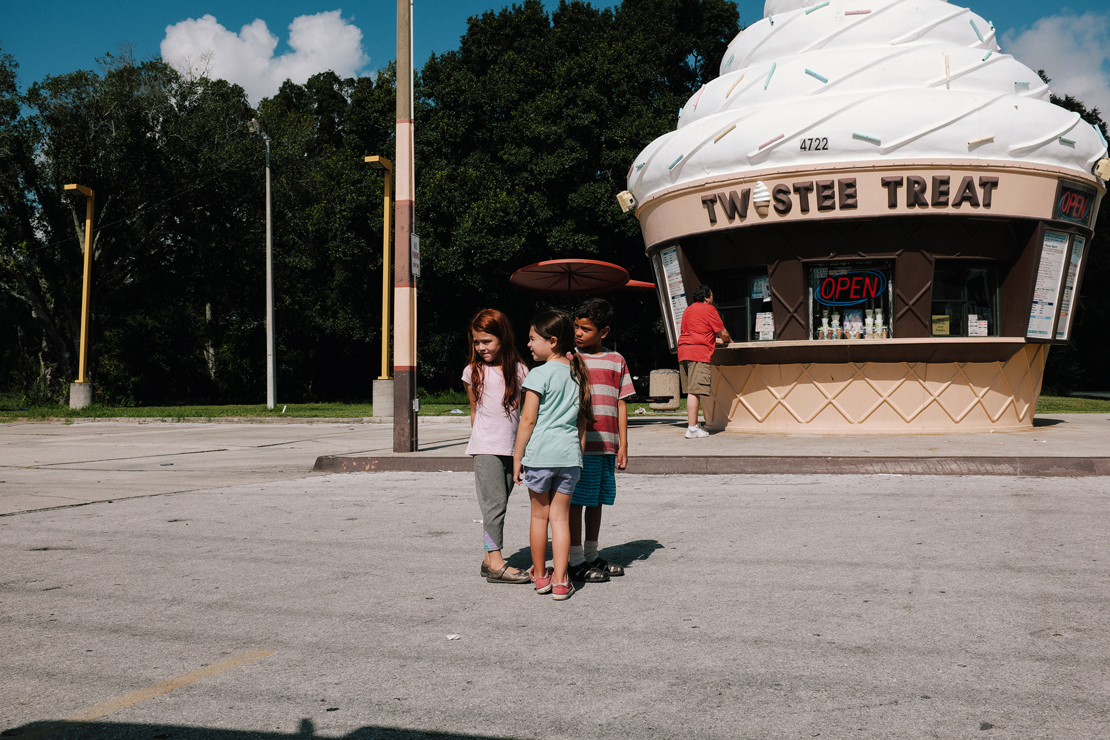 What do you get out of casting people with little-to-no experience that you can’t or don’t get from experienced actors?

I guess what it does for me is provide a fresh face, which I think is so important for certain characters, especially with someone like Halley [played by Bria Vinaite], in order to have that suspension of disbelief kick in and stay in. When you mix seasoned actors and first-timers, something interesting happens. The seasoned actor will rub off on the first-timer and then the first-timer’s freshness and naivety somehow excites the seasoned actor. It’s a nice alchemy and it’s different on set every time.

You’ve arrived in Hollywood at a time where there is a dark shadow hanging over it. What has that been like?
It’s obviously important that change is finally coming about. But, at the same time, when you see that something like this has been happening for the last 40 years, it’s really discouraging. I don’t think many of us on the fringe were aware of it; I haven’t really been in the mainstream Hollywood system so it’s hard for me to talk about because I just don’t know what was going on. I’m as shocked as everybody else.

Justice is being brought to people who have not only had a career full of misconduct but full-out criminal activity. We are also living in a time when social media can be judge, jury and executioner. That’s a scary thing as well. It’s a big issue and I have a tremendous amount of respect for those who stepped forward. I think it’s an important thing that’s happening and that sort of behaviour has no room in this field or any other.

This is, for the most part, a liberal industry where we’re tackling issues for what we feel is the greater good of humankind. We’re supposed to be artists, we’re supposed to be putting out art that obviously requires respect and appropriate behaviour between genders and races. So for this to be happening feels like we’ve made no progress whatsoever.

The Florida Project is out now on DVD and Blu-Ray.

Linkedin
RELATED ARTICLES
OTHER ARTICLES
Steel City is often overlooked when it comes to the country's cultural radar despite its role in shaping electronic music.
As the Criminal Bar Association enters its fifth week of action, criminal barrister Russel Fraser explains why the legal professionals have walked out and how action is likely to escalate.
The author discusses her new memoir, which offers a sobering reflection on the racism and otherness she’s experienced along with a joyful celebration of her culinary heritage.
In the latest instalment of Photographers in Conversation, the creator talks portraiture, platforms and taking inspiration from Little Simz.
Protestors gathered outside Downing Street following the latest atrocities committed by Israel against Palestinians living in the besieged strip.
After rewriting the indie rulebook with her devastating songs about romantic longing, the singer-songwriter is now imagining a future in which the artist is no longer a product.