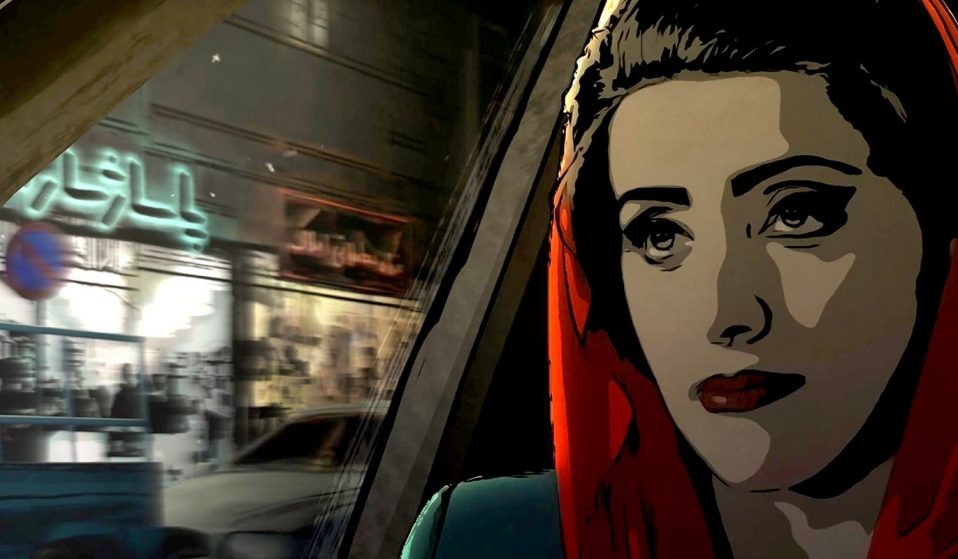 Despite its provocative title, Tehran Taboo is a nuanced, thoughtful look into the lives of those that have found themselves on the wrong side of the Iranian capital’s North-South divide.

In his full-length directorial debut, animator Ali Soozandeh skilfully weaves together the stories of his three main characters. There is sex worker and single mum Pari (and her mute son); bored and newly pregnant lower-middle-class housewife Sara; and Babak, a struggling musician who finds himself raising money to restore the virginity of a girl he had a one night stand with. Through a series of intersecting municipal miseries and challenges, the three unlikely figures end up living in the same apartment complex, their lives becoming increasingly intertwined as the story develops and their problems overlap.

The film himself hopes to show how the limitations of Iranian society – both political and cultural – can lead people into lives that are steeped in corruption, secrecy, and tragedy. Soozandeh himself left Iran in 1995 and has not returned since, which explains elements of the film – such as a casual public execution – that have been criticised as being somewhat outdated.

That said, for the most part, Tehran Taboo is a carefully thought-out, sensitive look into what happens behind closed doors in the city. As feature gears up for its release in the UK, we caught up with the director from his home in Germany over Skype.

What made you decide to make this film? Why now?
When I was a young person living in Iran I had a lot of questions. Why is there so much restriction here, and how have these restrictions changed our lives and shaped our identities? Maybe writing this script was my attempt at finding the answers to these questions.

Do you think these problems in this film are specific to Iran, or to Iranian culture?
It’s not just Iranian culture – this mindset is evident in a lot of other countries, too. A lot of the countries in the Middle East, North Africa… I even got feedback from a woman in Costa Rica who said the story could easily have taken place there. In reality, this story is about life in patriarchal societies and the problems that patriarchy brings along with it. When I was researching the script I found an internet platform for women in Germany who were looking for virginity reconstruction surgery… the pressure that is on these youths in Iran is also on young people in diasporic communities in many other countries. I think to some extent these problems can be found anywhere.

Babak and Donya in the Street

What made you decide to use rotoscope animation for the film?
Obviously [due to the subject matter of the film] we couldn’t film in Iran, so the first option was to film in another country that looks like it could be Iran. But it wasn’t a convincing option for me: the signs, the clothes that people wear in the street, the look and feel of the houses and the roads are all different. Tehran has a very unique feel, so I decided to use animation.

This isn’t a fairy tale; it’s an adult story and it must be acceptable and believable for adults. Because of this, we needed something that would bring reality into animation, and rotoscoping helps with this. We used real actors and filled out the rest afterwards. Another thing is that animated images aren’t concrete – they leave space in the viewer’s mind for their own imagination. This really helps with stories that are a bit harder to watch, like this one.

What has the reception to the film been like, specifically amongst Iranians?
Among Iranians in Iran, it seems to be mostly positive, but Iranians living abroad are split into two camps: positive and negative. After screenings, I often see these two groups start talking to and arguing with each other. It’s really interesting to watch, and in my opinion, it’s really important, because we aren’t generally able to speak to each other about these things. We have to start the dialogue otherwise we’ll never be able to solve our problems. With non-Iranians, the conversation is usually more about the technical aspects of the film: music, script-writing, animation technique. With Iranians, it’s more centred around whether it’s an accurate depiction of Iranian society and Iran or not.

What’s the general consensus?
A lot of people say that no, Iranian society isn’t like this at all – and they’re right! That was never my intention. Iranian society is very conflicting; it’s a high contrast society that you can never completely represent in one film. Even just in Tehran: the north of the city is very modern and rich, and no one has the problems that you see in this film. But the south of Tehran is more traditional, religious and poor – these problems exist there. This story takes place in one section of society, and we meet a few individuals who are not representatives for the whole of society, they’re just a few people with problems. It’s their story, it’s not a meditation on Iran as a whole.

A lot of films that have been made recently about Iran for an international audience are often set in North Tehran. They seem to centre on the wealthy, and their problems with things like censorship and the freedom to party. I liked that Tehran Taboo showed stories that can often be overlooked in other films.
At a screening in Vancouver, a woman came up to me and thanked for showing these problems. She told me she herself had many of these problems in Iran but could never talk about them because everyone would tell her to keep quiet so as to not bring shame to her family. She eventually became a refugee in Canada, but still doesn’t feel able to talk about what she went through because Iranians in Canada find her experience embarrassing. We [Iranians] like to present a nice image, especially when it comes to the way we are perceived in the West. We hide our problems behind these facades; we haven’t talked about these things so it’s hard for us to accept them.

Pari, Elias and Sara in a Restaurant

The discrepancy between public and private life in Iran is much more pronounced than in many other counties. Could you talk a little bit about that?
When I lived in Iran, the practice of having multiple masks for different places was completely normal for me. It was in no way something negative that I had to switch between all these different characters. It was only when I left that I realised that this wasn’t the case everywhere, and that [in Europe] I could just be myself. Obviously not 100 per cent, but more than I could in Iran. Something that was very important for me in the film is the fact that no-one is absolutely good or bad; absolutely a victim or a villain. Even while we are being victimised by society, it’s possible to simultaneously limit someone else. It was important for me to show that it isn’t just people themselves who decide destiny, your surroundings also have a huge effect on our actions. Our lives are made up of circumstances and decisions that we make in response to the situations we find ourselves in.

I found the overall message of the film quite hopeless: did you intend for this to be the case?
Iran was a dark and hopeless place for me. But in my opinion, there is one ray of hope in this story: the child. He’s the only character who has a happy ending of sorts, in that he gets to go to school. That’s a ray of light in the tunnel of darkness. Education is the only hope we have, and if we can nurture the new generation through education and culture, we can change society in the long run.

It’s worth saying that there were some laugh out loud moments in the film, even while you are dealing with such dark and depressing subjects. How important is humour to you? Did you want the film to be funny?
Telling jokes is a very normal part of everyday life in Iran. When you think about it the best jokes come from people who have the most problems; for me it was interesting to explore how telling jokes is a way to relieve societal pressures. If we stop telling jokes, life becomes really dark.

Tehran Taboo is released in the UK on October 5.

Linkedin
RELATED ARTICLES
OTHER ARTICLES
Over a dozen Stop Deportation activists locked themselves to each other outside a detention centre to prevent coaches taking those due to be on the Rwanda deportation flight from leaving.
Photographer David Hoffman recalls documenting the extreme wealth inequality around Tower Hamlets and Hackney int the 1980s.
Whether it's partygate, the climate crisis or the spiralling cost of living, the fightback begins on the picket lines writes Tommy Vickerstaff
A new edition of a seminal book brings together iconic images of the band onstage in their full glory and backstage in moments of unguarded camaraderie.
50 years since its inception, and the campaign calling for recognition that capitalism depends on domestic labour is as pertinent as ever.
Finland-born photographer Sirkka-Liisa Konttinen looks back on her decades-long documentation of life in Northern England.