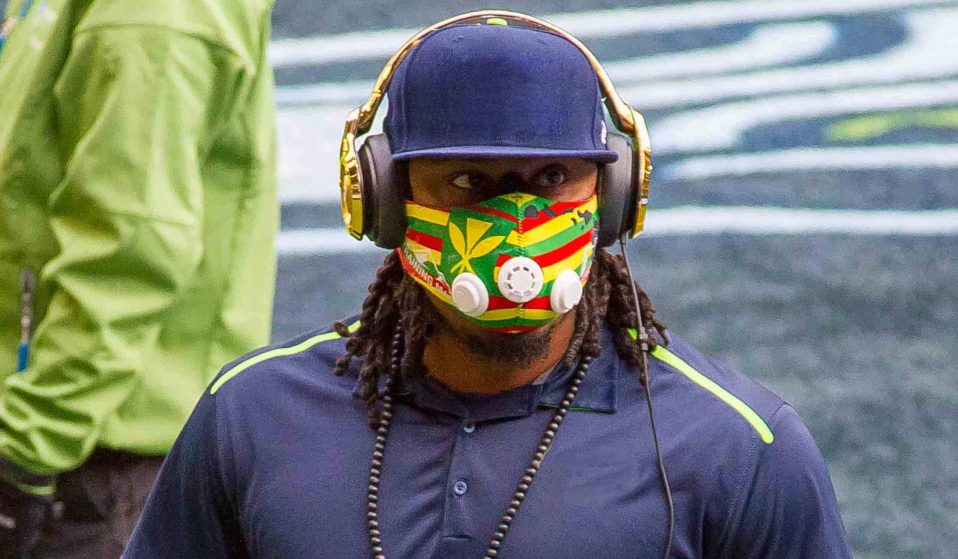 Photography © From Lynch: A History. Written, produced, and directed by David Shields.

Lynch: A History is a new documentary which examines race, masculinity, media and protest at the turn of the millennium.

Lynch: A History is a new documentary which examines race, masculinity, media and protest at the turn of the millennium.

“I’m just here so I won’t get fined,” repeated NFL star Marshawn Lynch in response to 25 different questions asked during Super Bowl Media Day in January 2015. It was a masterful play from the Seattle Seahawks running back after having been fined twice the previous year for refusing to engage with reporters.

The Oakland native’s act of resistance intrigued David Shields. The filmmaker had previously been trying to make a documentary based on his 1999 book Black Planet: Facing Race During an NBA Season – but after seeing his Media Day appearance, he realised that the NFL star himself was the perfect subject.

The resulting film, Lynch: A History, is a breathtaking look at race, masculinity, media, and protest at the turn of the millennium. It charts Lynch’s rise as a high school football star in Oakland, his first drafting with the Buffalo Bills, and his time with the Seattle Seahawks and the Oakland Raiders.

“Buffalo was the place where Lynch lost a certain style of friendliness and openness,” explains Shield. “He felt badly used, abused, and tossed out in Buffalo. The national media took relatively minor infractions and blew them up into racist stereotypes. It was a transformative time for him even though it was brief. It was an immersion into the rest of America. He was called racist epithets online and it was ugly and nasty. He was hugely stereotyped as Oakland thug.”

Set against the backdrop of historic and contemporary racism in America, it offers a multi-dimensional view of Lynch as athlete, family man, and rebel with a cause. “The film tracks how Marshawn Lynch uses silence as a form of protest,” says Shield. “That silence was born in Oakland, hastened in Buffalo, viralised in Seattle, politicised in Oakland and then handed off like a baton as a legacy to younger generations of players.”

Featuring more than 700 fair use video clips sequenced in rapid-fire succession, the film pivots, twists and spins to evoke the kinetic energy of Lynch’s best runs. Juxtaposing scenes from the NFL star’s life alongside African-American folk hero John the Conqueror – the son of an African king in the Congo sold into slavery and famous for outwitting slaveholders – Shields underscores the moral imperative of Lynch’s refusal to participate in the capitalist system designed to exploit black citizens.

“The thing I was looking for was the moments of silence, resistance, rebellion, protest – basically fuck you-ness – any time Marshawn was stopping the gears of the machine. There are many ways to resist. You can protest in the streets or run for office, but surprisingly there’s this powerful thing called silence. I wanted to show Marshawn’s silence speaks more loudly than 99 per cent of other people’s verbiage.”

Lynch, as you might imagine, was no way involved in the film. “My joke line is that I would have been bitterly disappointed if Marshawn agreed to be interviewed,” adds Shields. “He and his representative have made quite clear they won’t in any way impede the movie in any way, but they won’t participate in it.”

Lynch: A History will release on iTunes on July 28; pre-orders begin July 21. Screenings in Los Angeles will be held at Laemmele on July 28, 29, and 30 and in Oakland at the New Parkway Theatre on August 7, 2019.

Linkedin
RELATED ARTICLES
OTHER ARTICLES
With abuse of call-centre staff on the rise, many are now speaking out about the hostility they’ve faced.
From Brooklyn gang members, to Welsh miners and the residents of East Harlem, Bruce Davidson used his camera to shine a light on the most marginalised.
Photographer Melanie Nissen recalls capturing the characters, fashions and rarefied chaos of a rapidly-expanding set of punk bands who helped to redefine the genre.
The internet furore surrounding a certain NY-based furniture designer should make us question whether condemning people in the harshest possible terms harms more than it helps.
While the popular news aggregation service has been kicked off Twitter, its demise does not spell the end of digestible misinformation.
As the role of the nuclear family is increasingly called into question, people are finding new ways to exist outside heterosexist norms.