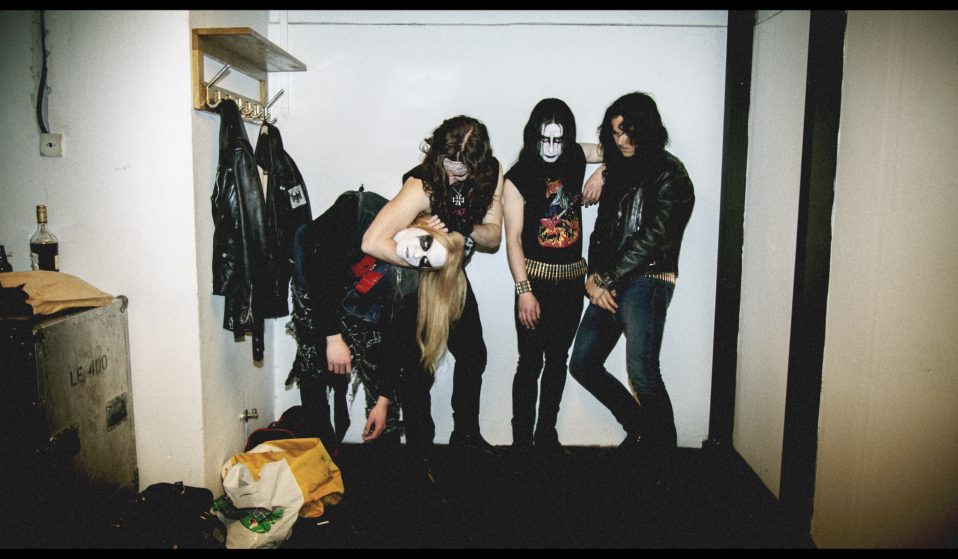 Director Jonas Åkerlund discusses his new film Lords Of Chaos – a pitch-black thriller about Norwegian metal group Mayhem, whose embrace of the dark side led to arson, suicide, and multiple murders.

Director Jonas Åkerlund discusses his new film Lords Of Chaos – a pitch-black thriller about Norwegian metal group Mayhem, whose embrace of the dark side led to arson, suicide, and multiple murders.

Fanaticism is usually taken seriously, which is understandable given its appetite for destruction. But occasionally someone dares to portray it differently. That’s also the less travelled route favoured by the filmmaker Jonas Åkerlund in his new film, based on the real-life story of a Scandinavian black metal band whose embrace of the dark side led to arson, suicide, and multiple murders in mid-’90s Norway.

Lords of Chaos is a fictionalised account of the drama surrounding Mayhem, an Oslo band credited with popularising the Scandinavian black metal scene. Swedish born Åkerland was in a black metal band, Bathory, around the scene’s inception, and knew one of Mayhem’s band members, the vocalist Dead, whose suicide in 1991 sparked the group’s appetite for destruction.

Up to this point, Mayhem were known for onstage theatricality. They embraced dark Satanic lyrics and imagery, wore corpse-like makeup, and sported preposterous stage names like Euronymous, which was the title adopted by the 17-year-old who became the self-proclaimed bandleader in the wake of Dead’s suicide (he capitalised on the incident by taking a picture of the corpse, and using it as the cover of a bootleg live album).

Between Euronymous’s desire for publicity and new band member Varg’s thirst for nihilism, the band slowly became radicalised. An outbreak of Church burnings followed, which the band took credit for in an interview to a Norwegian newspaper. In 1992, fellow bandmate Faust killed a gay man. Then Varg, in an apparent bust-up with Euronymous over contracts, stabbed the band leader to death in August 1993.

Mayhem’s story has been recounted many times already (namely in the book Lords of Chaos, which the new film takes its title from). These retellings tried to find answers in the loose ideology the young men claimed to espouse. But Åkerlund, who eventually left the black metal world for filmmaking (he’s the guy responsible for The Prodigy’s ‘Smack My Bitch Up’ and Madonna’s ‘Ray of Light’ music videos), takes a different tack. In Lords of Chaos, which stars Rory Culkin and Emory Cohen as Mayhem’s Euronymous and Varg, the comedy is broad and the violence is brutal, with the filmmaker taking aim at the farce of fanaticism. Here, Åkerland explains why he found it all so funny.

This story has been told before, with various accounts searching for answers as to why Mayhem descended into such violence. What did you do want to do differently?
All the books and the documentaries that came before seem to portray monsters with makeup. But these were young children with straight As – they didn’t drink, they were not abused, they had good parents. These kids didn’t have anything to blame. There’s a version of this movie which is portraying cool kids doing cool stuff and listening to black metal and sacrificing goats. Then there’s a more mature version, where we actually try to understand and focus on the relationships between these young boys, how you can be stuck in your bubble, and how you can become immune. Like when his friend [Dead] kills himself, Euronymous takes a picture of him instead of calling the police. Before you know it, killing a man is not that big a deal.

Mayhem uses pretty dark ideologies to back their actions. The church burning is anti-Christian, and when the band member Faust kills a stranger, they celebrate. What drove them to this point?
Back when it happened, the general narrative seemed to be very heavily into the idea that these kids were politically driven, or that they loved Satan. But I don’t really think they were politically driven. When you are young and are trying to figure shit out, one week you think Stalin is really cool and the next week you think someone else is cool, and then you eventually you find whatever it is you believe in. I think they didn’t know. They were thinking that saying the worst thing you can say had an effect. Talking shit about the church in Norway is big, because Norway is a really religious country. But I don’t think they had a real political agenda.

The group’s different personalities all played a part in pushing them over into violence. How did you see them and their motivations?
Euronymous was definitely the leader of the group. He was a small guy and he was very powerful. A lot of people who knew him said he was kind of a dick, actually. At the very end when he’s about to smarten up a bit, and he has a girlfriend, he cut his hair – it’s very symbolic to cut your hair if you’re from metal. He was on his way somewhere else. 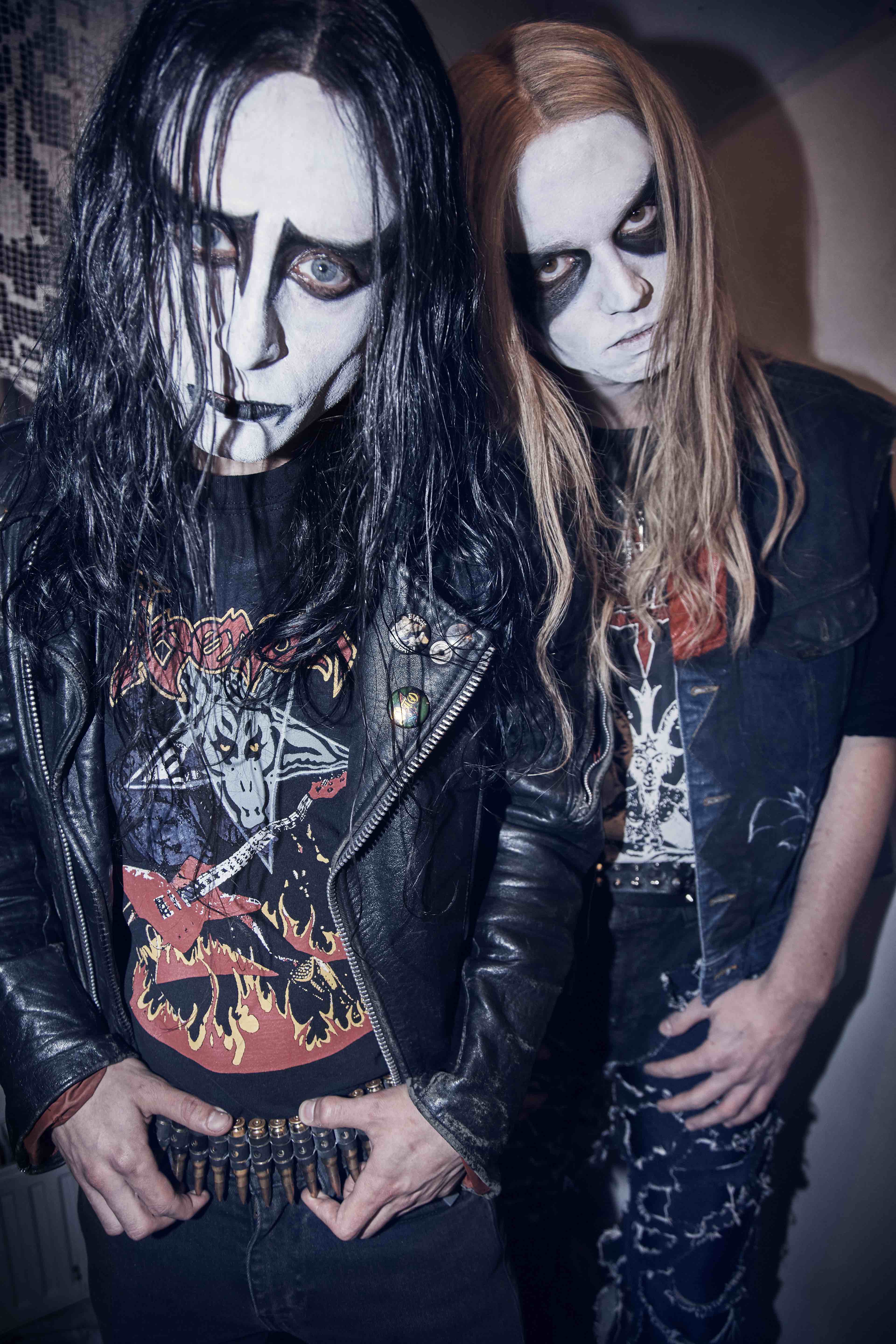 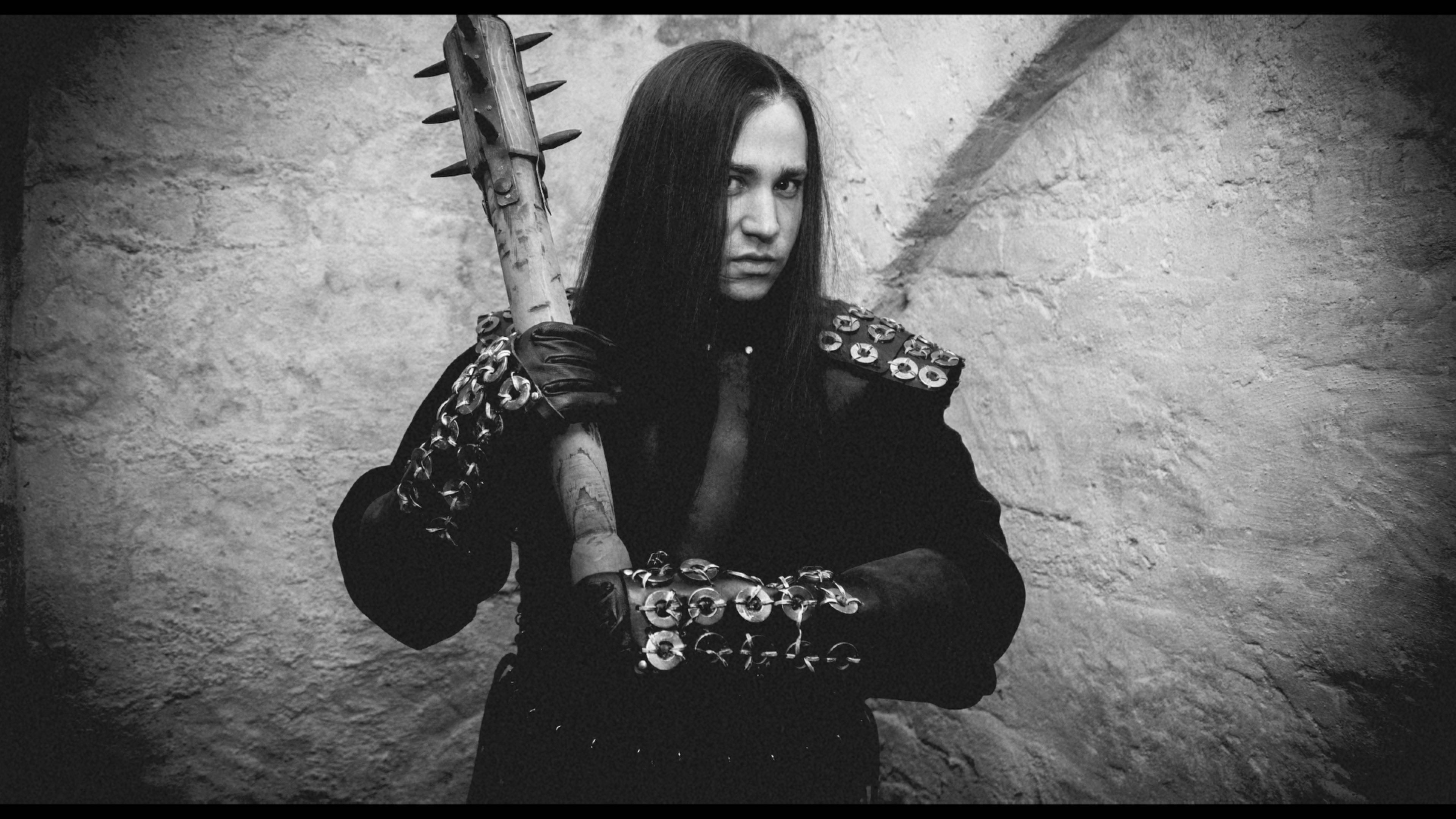 Yet he continues to lead the group, even when Faust was convicted of murdering a man he claimed cruised him in a park.
Yeah, but he was about to lose his position. I can identify with that. You suddenly see your friends slip away and stuff is not going as well… I can see that happen. But then he knew that it was wrong. He didn’t burn that many churches, it was all the other people did. But he took credit for a lot of it.

A key scene is when Varg invites the journalist over to his apartment so he can take credit for the church burnings. The interview is played as farce, as the journalist tries to unpick the rationale behind Varg’s mishmash of ideologies from Nazism to paganism and Satanism. There’s a great interview afterwards with the journalist and he can’t stop laughing. Word by word, those are the questions he asked. I took that from the interview. It was so funny. Varg is very politically outspoken now, like neo-Nazi and racist level now, but I figure that after 22 years in jail [for the murder of Euronymous] and everyone knowing what he did, he’s unfiltered now, it doesn’t matter to him anymore. He’s still trying to have that [shock] effect.

Why did you decide to find humour in the story, given the darkness of the subject matter?
It’s impossible to make a movie about young boys, music, parties without having fun. And it’s a little silly. Spinal Tap is still the best rock’n’roll movie ever made because they are making fun of it. We are asking a lot from the audience to see this movie. It’s very dark, it’s very sad, there’s a lot of music. These moments when it’s so silly, like when the journalist is interviewing Varg, you take a step outside the bubble and see how really fucked up it is. It’s also real. I read the police reports. I know what happened. 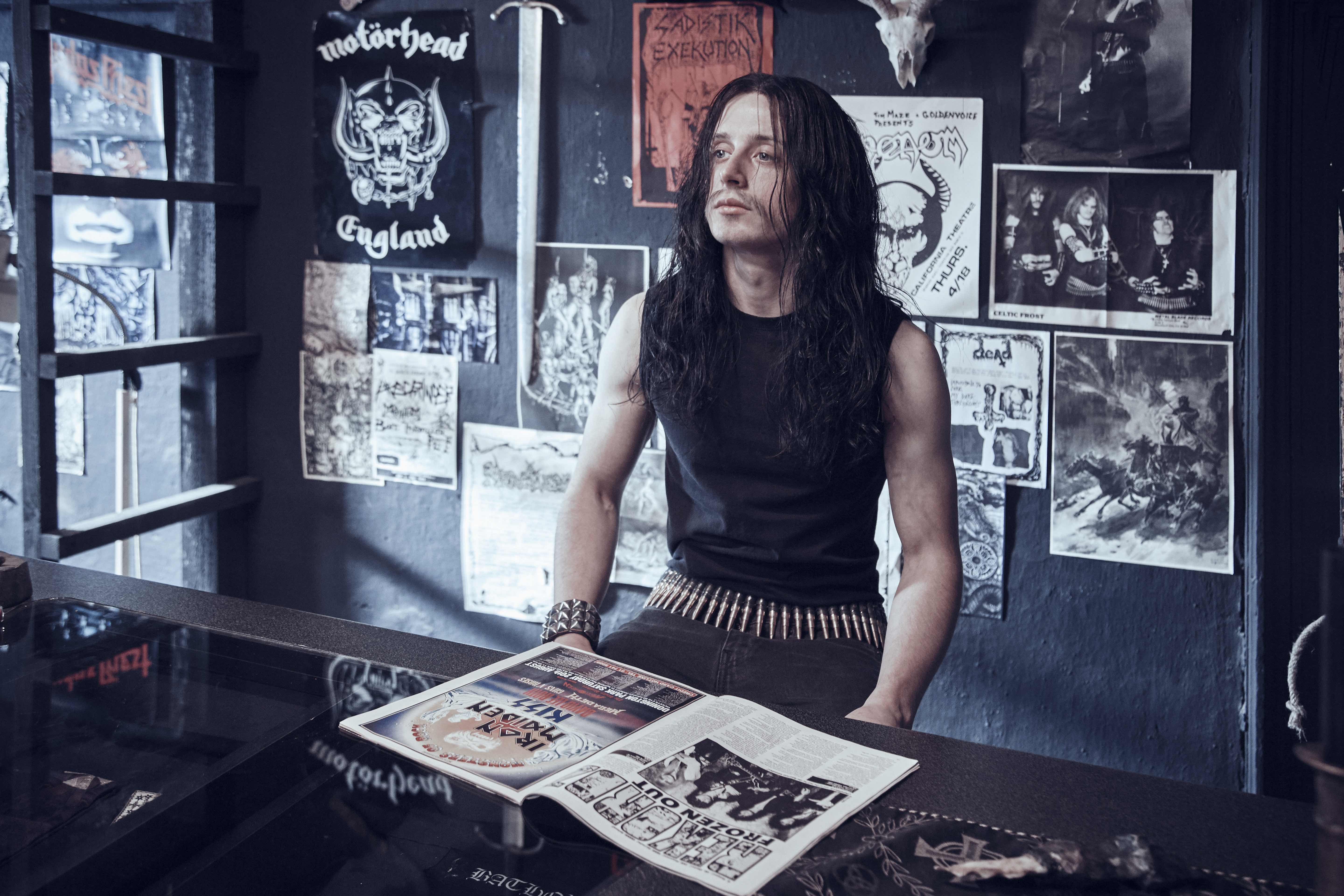 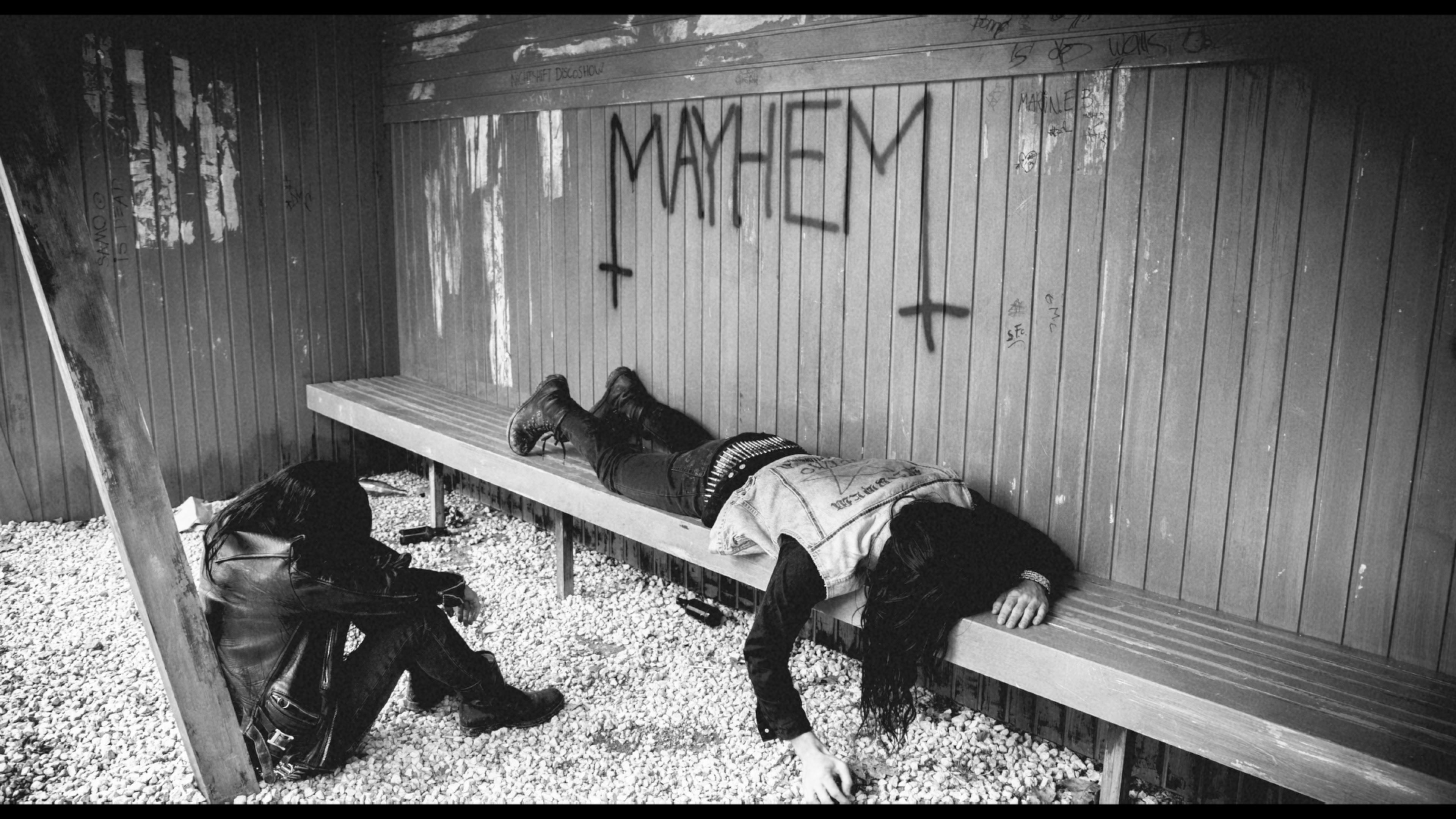 Lords of Chaos is in cinemas from 29 March.

Linkedin
RELATED ARTICLES
OTHER ARTICLES
The musician, DJ and founder of Monika Enterprise reflects on a career defined by revolution and rule-breaking.
The internet furore surrounding a certain NY-based furniture designer should make us question whether condemning people in the harshest possible terms harms more than it helps.
Hundreds gathered together to protest the policing bill by making as much of a racket as possible.
In 1984, Martin Shakeshaft set out to document the miner’s strike as it really happened, using his photography as a tool for activism.
Jermain Cikic reflects on his experience of visiting the island of Samos, Greece, in the summer of 2021.
In the UK, Hongkongers are continuing to stand in solidarity with the pro-democracy movement.