DIY documentary series Unplanned America follows three Australian best mates on a riotously funny, make-it-up-as-you-go-along journey through the cultural fringes of the US.

DIY documentary series Unplanned America follows three Australian best mates on a riotously funny, make-it-up-as-you-go-along journey through the cultural fringes of the US.

Three Australians, a shitty car with 300,000 km on the clock, no real plan and only the vague hope of discovering some of the weirdest, off-the-map shit that the United States has to offer: this is not how you make television.

But then Unplanned America isn’t like any other show out there. Gonzo, Nick and Parv star in their own hilarious do-it-yourself chronicle of a cross-country road trip in search of subcultures and strange happenings on the fringes of American society.

As season two goes live on Netflix, we spoke to the guys about taking sightseeing advice from drunken strangers and the ultimate road trip vehicle.

How did you three first meet and where US road trip idea come from?
Gonz: We all met working together at MTV here in Australia. The idea to road trip across the States was born out of the fact that I’d been working in the same job for over five years and just needed a change. I figured a six month trip around the States would do the trick, but also wanted to make something of the adventure using the skills I’d picked up over the past half-decade, without any of the restrictions that come from working for a big corporation.

I approached Parv without much more of a plan than getting to the States, buying a car, hitting the road and filming the adventure, hoping that we’d find ourselves in some bizarre situations worthy of a show. He promptly agreed to join me. Not one to be left out, Nick quickly got involved and Unplanned America was starting to take shape.

The reasoning behind picking the States out of anywhere in the world had a lot to do with the old “only in America” adage. It’s also incredibly diverse from state to state, Americans tend to take kindly to Australians and most importantly it’s an English-speaking country. Between the three of us, that’s sadly the only language we’re fluent in. We had never travelled together before, so it was a leap of faith that we wouldn’t get on each other’s nerves. 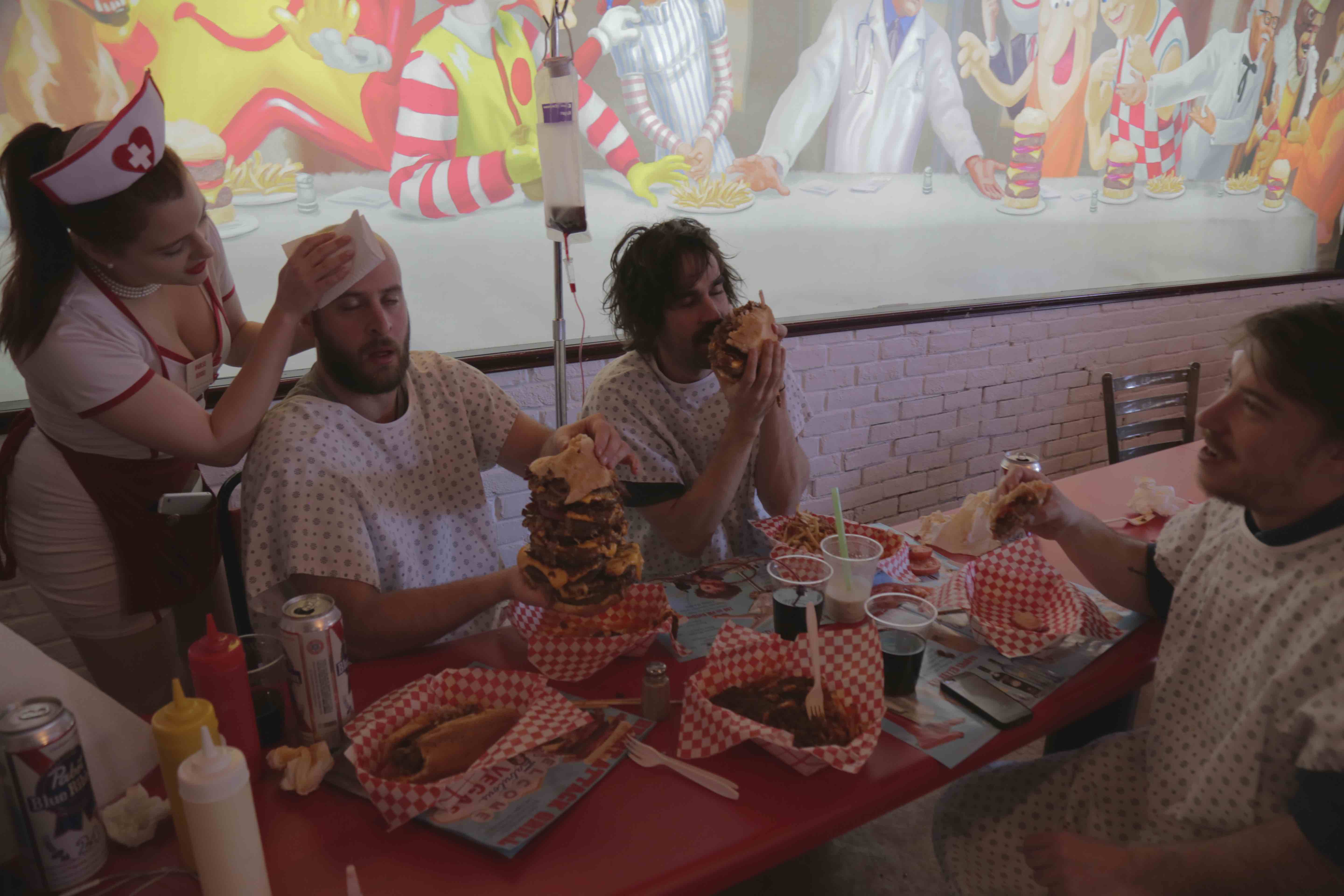 Explain how you find the places you visit. Do you just get drunk in a bar and see where the locals point you to?
We definitely drink in as many bars as we can while traveling around, getting friendly with the locals, but really most of the pieces we end up filming are things we’d heard about through friends of friends or just through doing our own research a few days before we are due to arrive at our next mapped out destination.

In saying that, we’ve had serendipitous incidents that have made it into the show. In the first series some college kids in Boulder pointed us in the direction of a cryogenically frozen man in a nearby mountain town, which we just had to check out. We ended up laying fresh ice on the corpse.

In the new series we have a whole episode devoted to the strip club scene in Portland, Oregon. We came up with this idea when we were stuck there when Parv had his appendix removed while fiming the first series. As we were stuck in that great city for a while, waiting for Parv to recover, we conducted our own thorough research. We learned that Portland has more strip clubs per capita than anywhere in the States, which is when we first had the idea to film a story that centres on that surprising fact.

Check out this Huck exclusive clip from Season 2:

What does subculture mean to you? and what’s the draw of finding these type of cultures?
Subculture is a funny word. I guess to us it means a community of people carving out a life for themselves in a unique or seemingly different way than society at large. We were drawn to these fringe societies to get some insight into the different ways people choose to live their lives. I know I get caught up in routine and going with the flow and it’s nice to sometimes remind yourself of the diversity all around us and the fact that there really is no single correct path to ensure a fulfilling life.

Also, when you spend time with people who at face value seem to be so different to yourself, it’s refreshing to realise how much everyone actually has in common. It’s a nice reminder not to be so quick to judge.

Season 1 got pretty wild. How did you try to take things to the next level in Season 2?
We slightly altered our approach to Series 2. This time around we’re looking more in-depth at topics and tackling some bigger issues affecting American culture at large. For instance, we have an episode solely about the medical and legal cannabis revolution that’s underway. 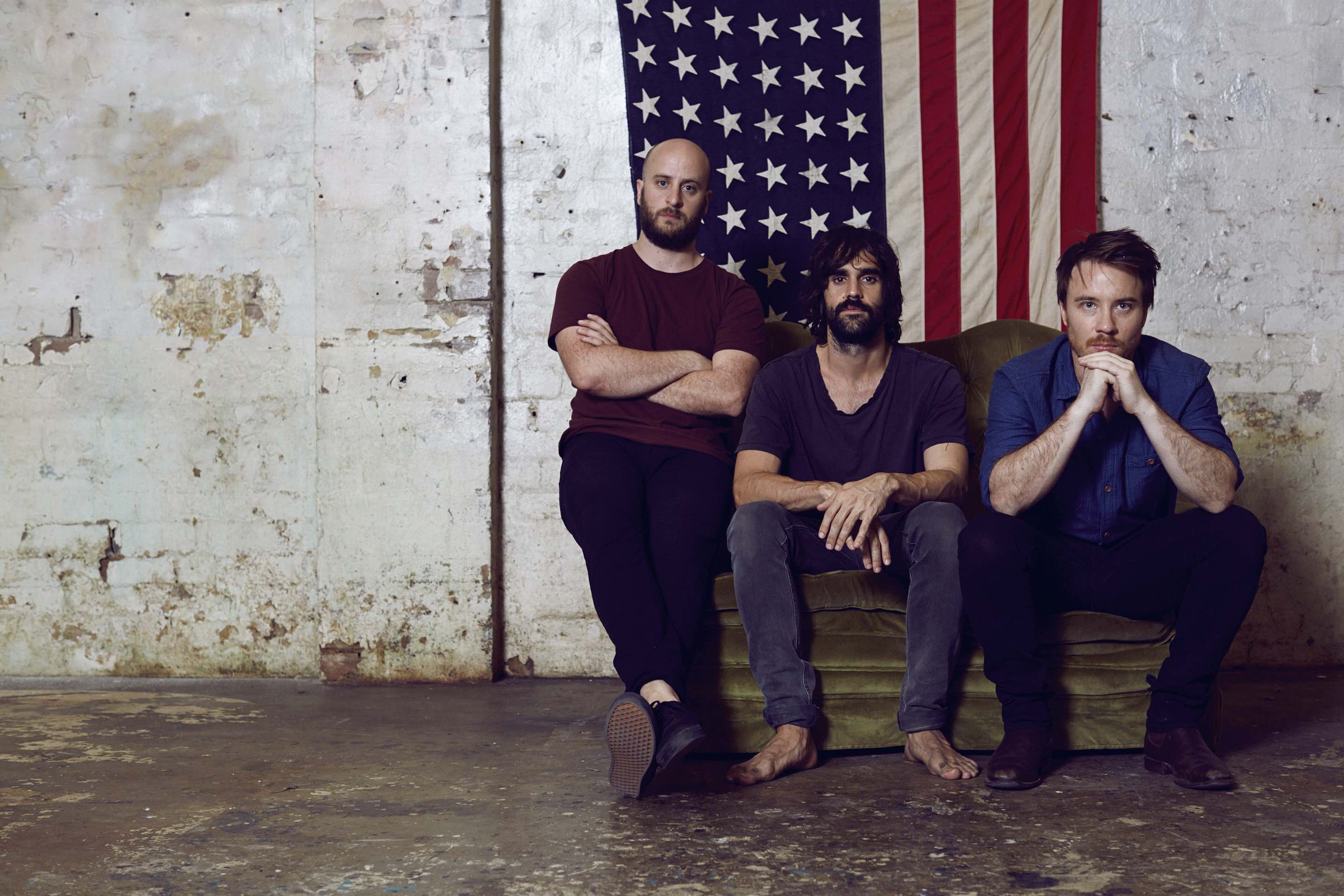 What’s the most surreal/distributing place you found yourselves in Season 2?
I think the most disturbing place we found ourselves in Series 2 was at the Heart Attack Grill in Las Vegas, a place that serves a 20,000 calorie burger. That’s enough calories to satisfy the daily requirement of ten men… So of course I ordered it. They also have a deal where if you weigh over 350 pounds, you eat for free. This was probably the most “American” place we visited, but even here there were some surprising food revelations.

What were your personal favourite experiences in Season 2?
Gonz: It’s a tough call, but I’ll go with everything to do with our episode looking at tattoo culture in Southern California. We spent time at Shamrock Social Club and I got tattooed by the legendary Mark Mahoney, who is quite simply the coolest mother fucker I’ve ever met. But in this story we also went to a place called Homeboy Industries that does free tattoo removal for former gang members, as well as witnessed an inspiring woman named Dawn receiving restorative areola tattoos following a double mastectomy. 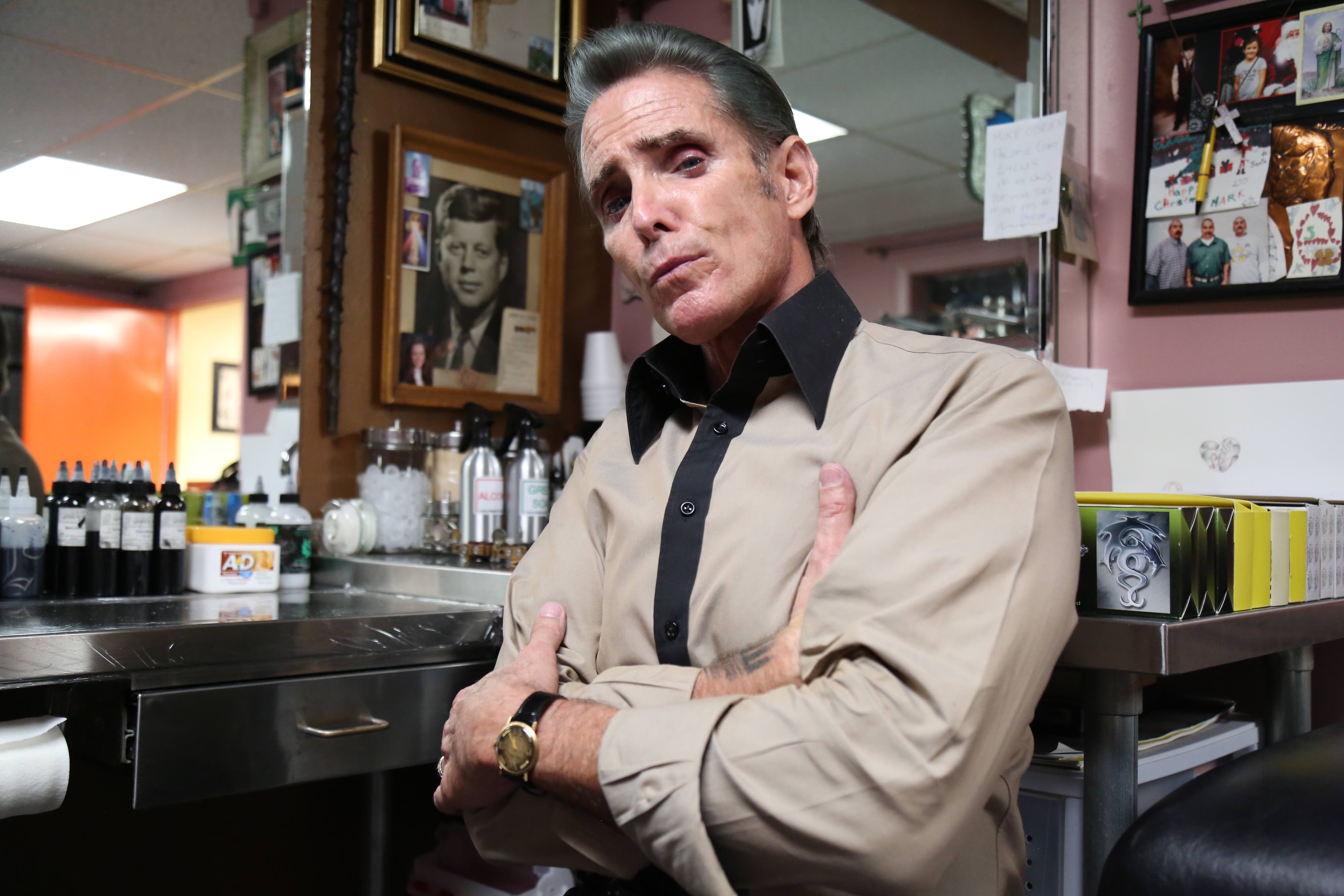 Nick: I loved the city of New Orleans. I have never been anywhere that’s very existence is so intrinsically tied in with music. It’s inspiring and exciting as you hear brass music pumping on every street corner. We even shut down the main street in the French Quarter for 45 minutes with our own parade! Yep you can do that! Marching band and even a police escort flanking us! An amazing, dreamlike, joyous moment. We also went to the most intense nightclub I’ve ever been to… the place that invented twerking. It was an insane spectacle and we even got up on the microphone and started our own chant! The club went off! 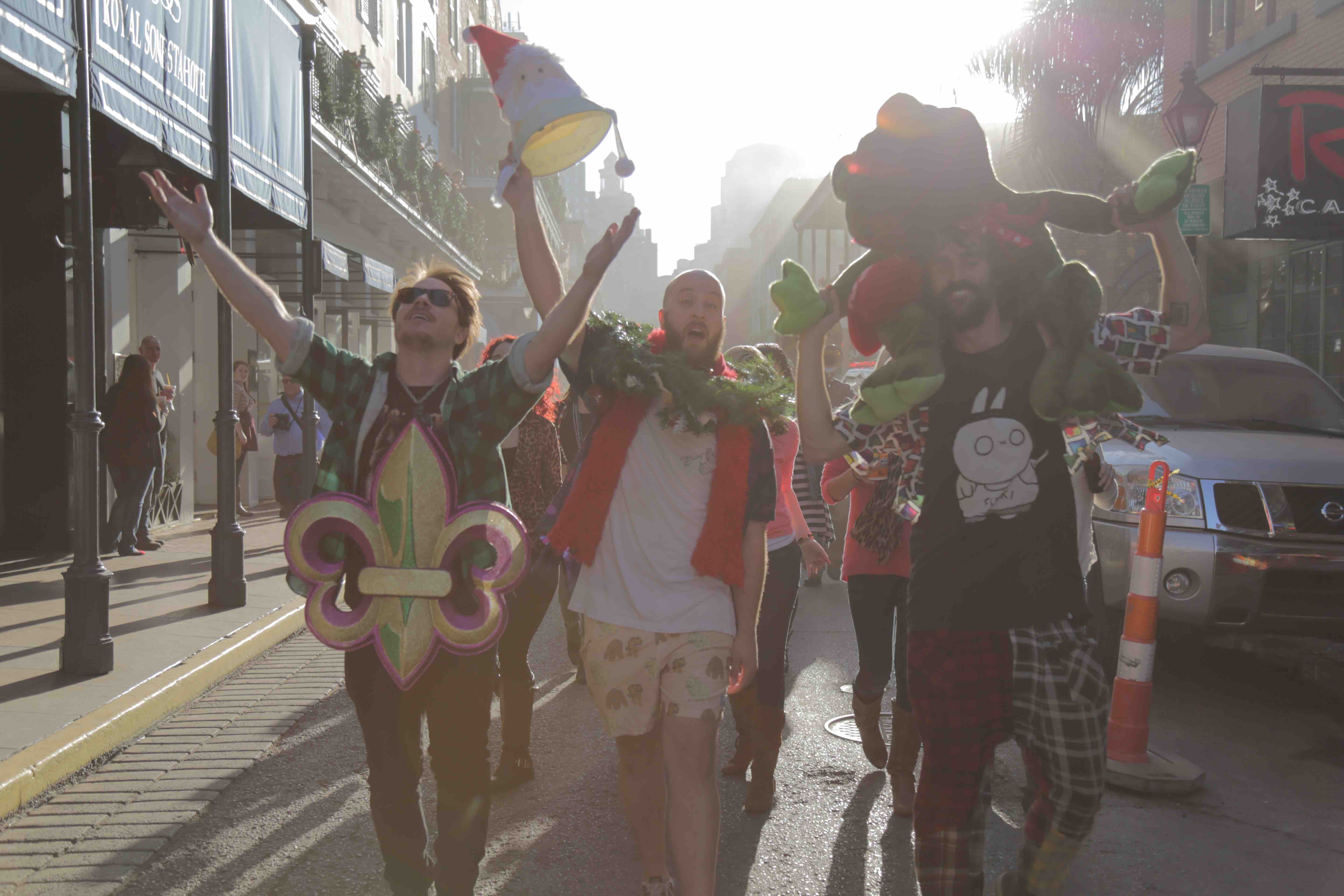 What are your biggest travellers’ tips?
Pick a few key places you want to visit and allow yourself plenty of time to deviate from your itinerary. Avoid the tourist traps, or tick them off as quickly as you can and get busy spending time off the beaten track, hanging out with the locals, leaving your preconceptions at the door. The best parts of any trip are the moments that aren’t planned.

Are there any places in the US you still really want to check out? Have you thought of taking Unplanned worldwide?
We have actually already filmed a third series of the show and it’s probably safe to say that we’ve saved some of the most out-there stuff for that series, but there’s still a few months of editing before that sees the light of day. Even with that series still to come, it kind of feels like we’ve only barely scratched the surface of America.

In saying that, we’re definitely open to the idea of taking Unplanned to other parts of the world, it seems like the logical next step. In terms of where we’d go, ‘Unplanned UK’ has a pretty decent ring to it. 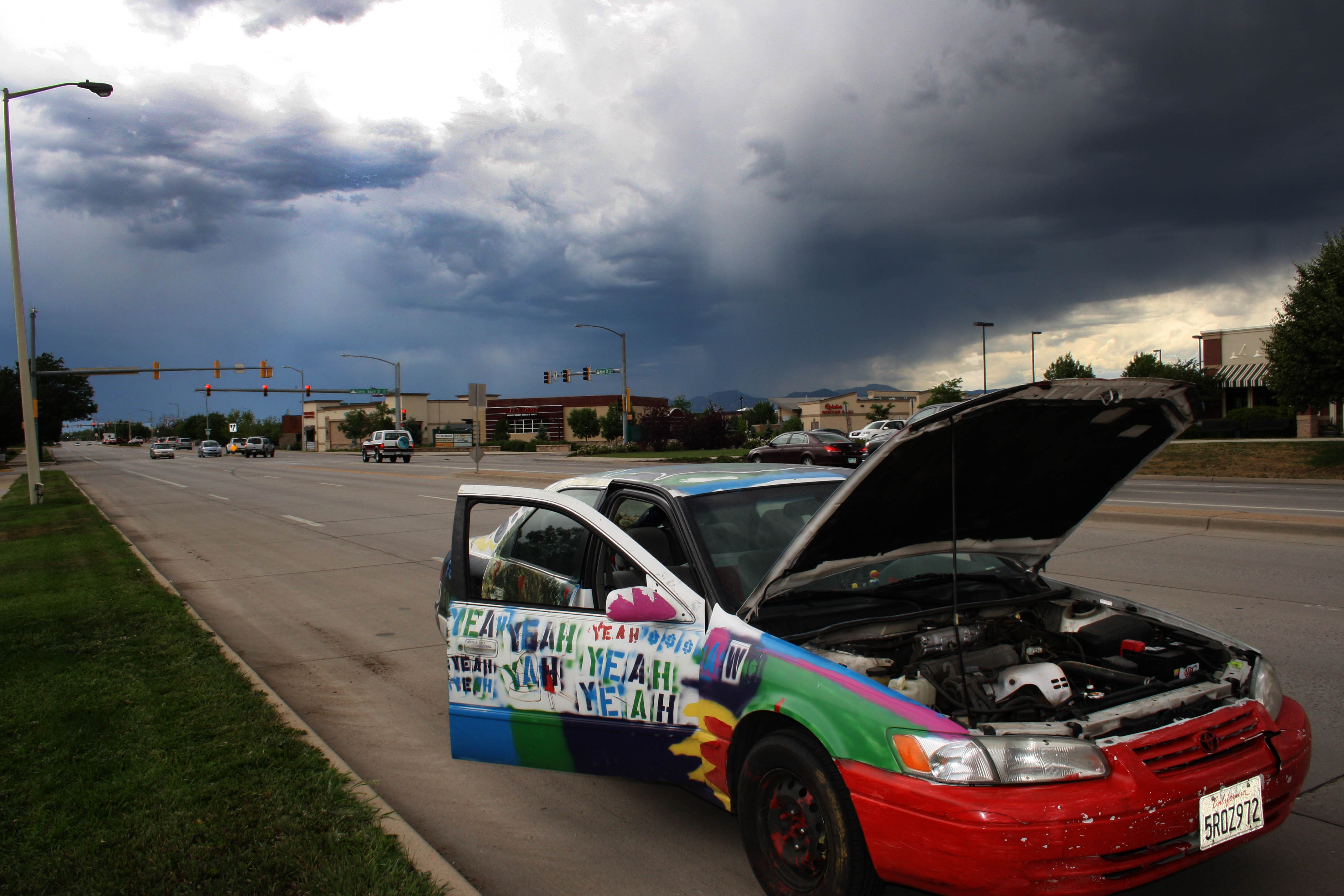 The legendary Camry from Season 1

The Toyota Camry in Season 1 played a solid cameo role. What did you get around with in Season 2 and what’s your ultimate American road trip vehicle?
We actually sold our beloved shit-box from Series 1 in Dallas just before we flew home, to a guy who’d just got out of prison and was now flipping cars for a profit, at least that’s what we were told. We ended up pouring a heap of our money into that car just to make it around the country, so this time we went to the more sensible route and got a hire car. It’s best described as a soccer Mum caravan, but we grew to love Spurgeon (as we christened it – a reference any Eastbound & Down fan will hopefully get). It was returned to the hire company in a pretty sorry state, so apologies to the next family that got it after us.

I think our dream mode of transport for this trip would be the classic American school bus, decked out to the max. Failing that, something classically pathetic like the Griswold’s car in the original National Lampoon’s Vacation, complete with wood-panelling would be good.

Season 2 of Unplanned America is on Netflix now.

Linkedin
RELATED ARTICLES
OTHER ARTICLES
New film series Ahead aims to fuse skateboarding, travel and discovery like you’ve never seen before.
The subversive movements of the '60s and '70s are still a lifeline for outcast kids across America.
There's a cut'n'paste cacophony from Newport Beach to Noosa.