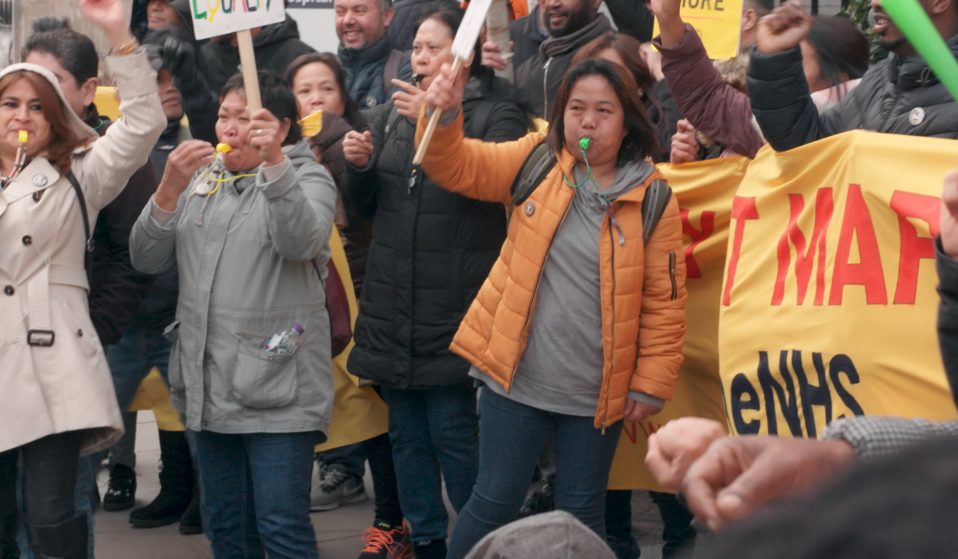 A new film follows United Voices of the World as they fight for key workers’ rights at St Mary’s Hospital, London.

A documentary follows United Voices of the World as they fight for key workers’ rights, demonstrating how new, grassroots unions are reimagining collectivism and solidarity in the modern world.

The UK has plunged into the worst recession since records began. While a global pandemic has directly resulted in thousands of people being left jobless and without incomes, the insecurity was there long before COVID-19: in 2018, the Trade Union Congress (TUC) found that one in nine workers are in insecure jobs. That’s 3.8 million people with zero-hour contracts, gig contracts or agency work.

With that in mind, trade unions are more important now than ever. While critics label them as relics from the past, more and more radical, grassroots collectives have been appearing in recent years. At just six years old, United Voices of the World (UVW) is one of the most well known of the UK’s ‘new’ unions, fighting to protect workers’ rights in high-profile organised strikes at places like the London School of Economics, Topshop and St. Mary’s Hospital in London.

UVW’s action at St. Mary’s Hospital is now the subject of a new documentary produced and directed by filmmaker Hazel Falck and published by The Guardian. United Voices follows contracted key workers, like cleaners, caterers and porters, at St Mary’s Hospital as they work with UVW towards the same equal pay and benefits as in-house staff. The film charts a personal journey for UVW and the key workers, while also demonstrating a reimagining of what modern trade unions can look like.

“The potential of unions is something I’ve been interested in for years,” explains Falck. “Particularly how unions are finding relevance again and how unionism might need to be reimagined for our more fragmented social constructs, culture and labour market.”

Why did you decide to make a documentary about unions?
The way things have been politically in the UK, for what has been most of my adult life, definitely makes you search for answers. [It makes you look] anywhere for hope and potential: sometimes naively, sometimes extremely despairingly. It gets you thinking about where collectivism actually works. Unions are a long established model for that, and I was interested in how we might move towards collectivism again in a new way, in terms of the practical, legal power of the majority to change conditions – but also in terms of the solidarity and support that comes from being part of something bigger than yourself.

Can you explain the work United Voices of the World is doing?
United Voices of the World is a grassroots, campaigning trade union. They were founded to support and empower precarious, low-paid and predominantly migrant workers in the UK in 2014. They rapidly gained media attention and popular support with a series of high-profile victories for workers at Sotheby’s, Harrods, and the London School of Economics.

What’s unique about UVW is they are not limited to a particular sector or trade, like more traditional unions. As part of UVW there are cleaners, chefs, security guards, porters, sex workers, legal sector workers, cultural sector workers, charity sector workers; a whole mix of types of profession, cultural background, languages, and experiences at work and with union organising. One of the most inspiring things was to see the different facets of the union supporting each other and learning from each other, and how members who had won their cases previously got more involved with the union and advised and supported new groups and members. 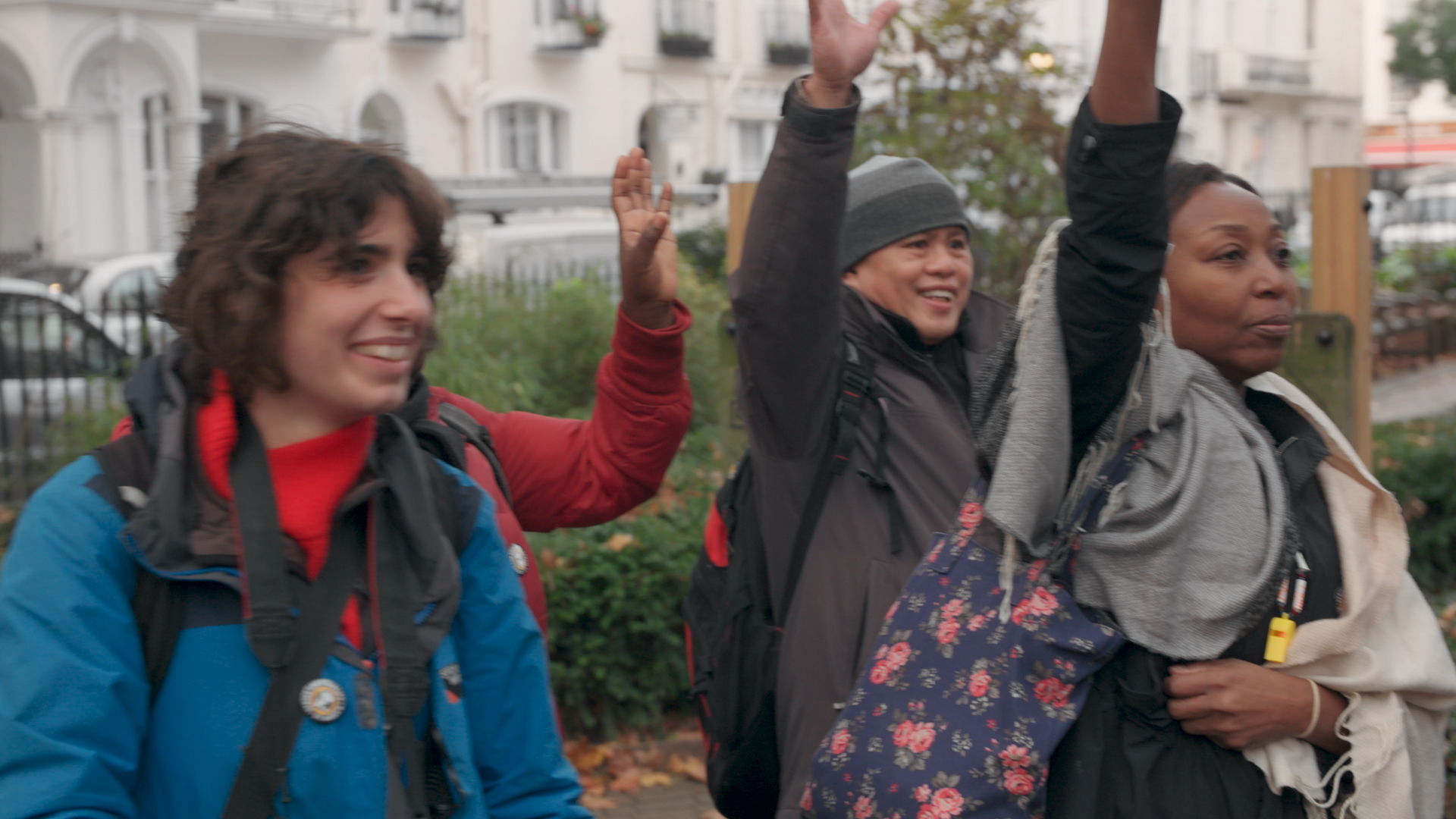 United Voices of the World has had some very public success stories. Why do you think they are so successful at organising and securing employee rights?
I think it’s a combination of things. They meet people where they’re at and they profess to offer something different than bigger unions. They understand and work mainly for people who are not originally from the UK – they recognise the specific circumstances and needs of those people in a way that isn’t commonplace. They definitely go harder and are more ruthless and radical than more established unions! Those tend to have existing relationships with employers and are beholden to walking a more balanced line.

I don’t think one form should replace the other, but it definitely seems that there is a need, appetite and space for a more direct, responsive and bolder form of union action. The conditions people are working under, and the way the labour market has changed, are extreme. They call for more radical approaches in order to fight back.

Why did you decide to focus on St Marys as a kind of case study – can you explain why workers went on strike there?
I spent time with the union as they dealt with cases from different groups all over London, learning and identifying which combination of stories and cases would work best for the film. After several rounds of developing access with different groups and strikes, the whole St Mary’s case came together very serendipitously.

The cleaners, porters and security guards at the hospital were outsourced to Sodexo, a French multinational, private facilities management company with a revenue of €22 billion last year. Like many of the union cases, the outsourced workforce had been passed from contract to contract, employed and managed by different companies, but many of them had been working at the same hospital for over a decade. They wanted to be paid the London Living Wage immediately and they wanted sick pay in their contract, as they were especially vulnerable to getting sick and only got statutory sick pay which left them often unpaid at home when they were ill.

They had issues with vaccination, with uniform allowance, with discrimination from management – all kinds of issues that were overwhelming the two supervisors, Loretta and Vitalija, who started the organising at St Mary’s. As their case gathered momentum and the numbers of employees joining the group grew and grew, it just naturally took up space in the filming schedule and our attention was captivated by the jeopardy of it as it was unfolding. 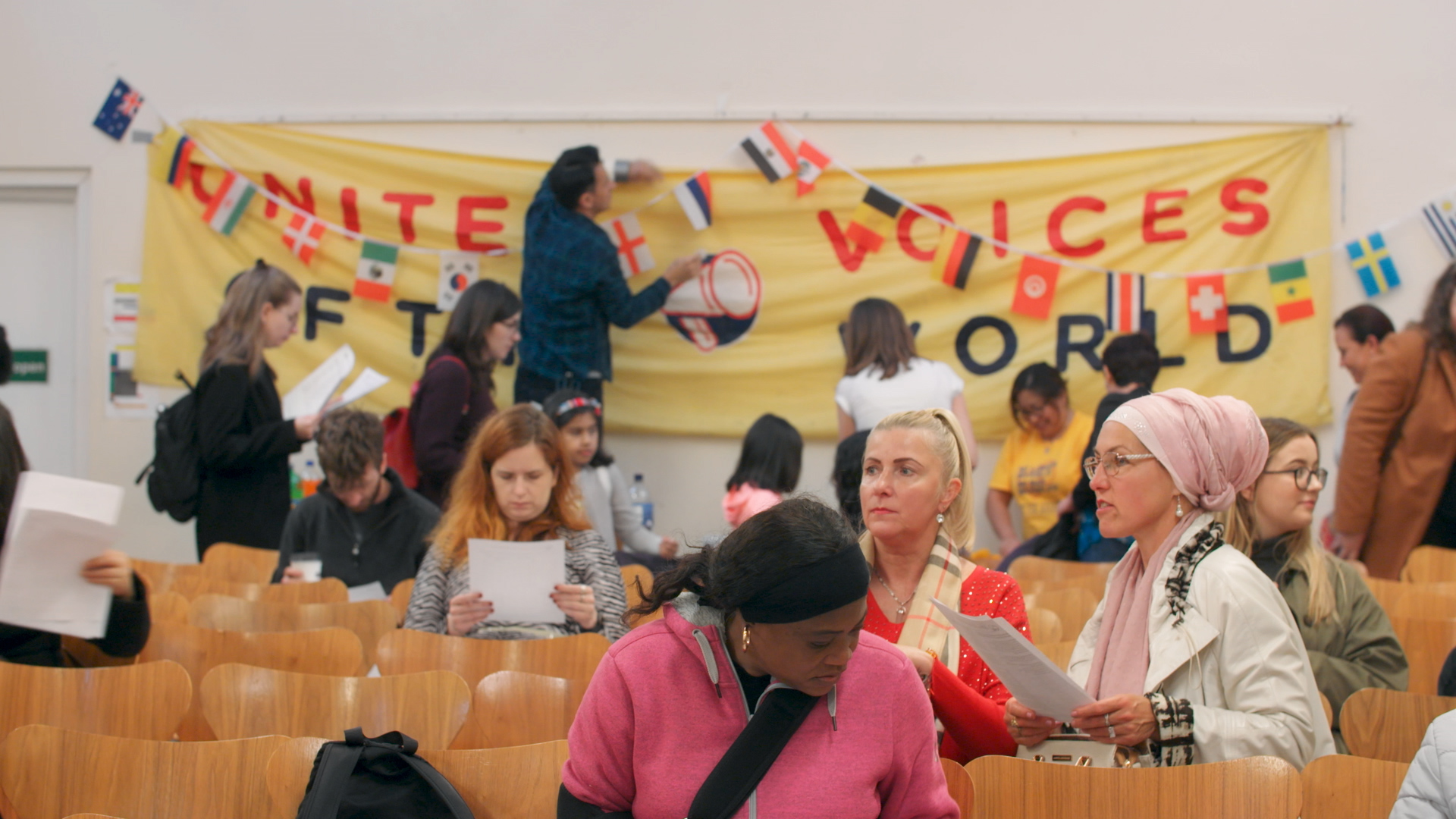 What impact has COVID-19 had on unions, particularly Voices of the World?
The union has been providing a lot of remote training, employment law workshops, and online support during lockdown. A lot of the organising happens via WhatsApp, and they’ve done amazingly at pivoting to remote organising during the pandemic. They were able to source and provide PPE to their members who had to continue working. The team at the hospital have had an extreme period of time. If they were still outsourced and on those minimum contracts when coronavirus hit I don’t know how that would have gone.

United Voices of the World focus particularly on migrant communities. Why are trade unions so integral to migrant workers’ rights?
Lots of members told me that they and their colleagues didn’t know the employment law and their rights in this country, although I don’t think that is exclusive to migrant workers. I think people who come here to work are exploited in various ways, and we need bodies and support to resist that. People need ways to organise that they feel comfortable in and part of.

I also met lots of people from countries where resistance, collective action, and literal revolution were intergenerationally understood and part of culture. Members from Colombia, Ecuador and Jamaica, the organisers at St Mary’s from Lithuania and the Philippines. Compared to contemporary British culture, which is a long way away from the union power and culture of resistance of the 80s, people from those countries were way more adept and literate in unionism. Trade unionism and labour rights is strong in the Caribbean, in South America and this is an amazing influence on the situation in the UK. The activism and action of these members is also securing significant improvements to working conditions for entire workforces, just from their own action and conviction.

The St Mary’s group won the Living Wage and contractual sick pay, and were brought in house as NHS employees, not just for themselves, but for the entire outsourced workforce across five hospitals of the NHS Imperial Healthcare Trust. That’s a serious impact, secured by the work of migrant workers. 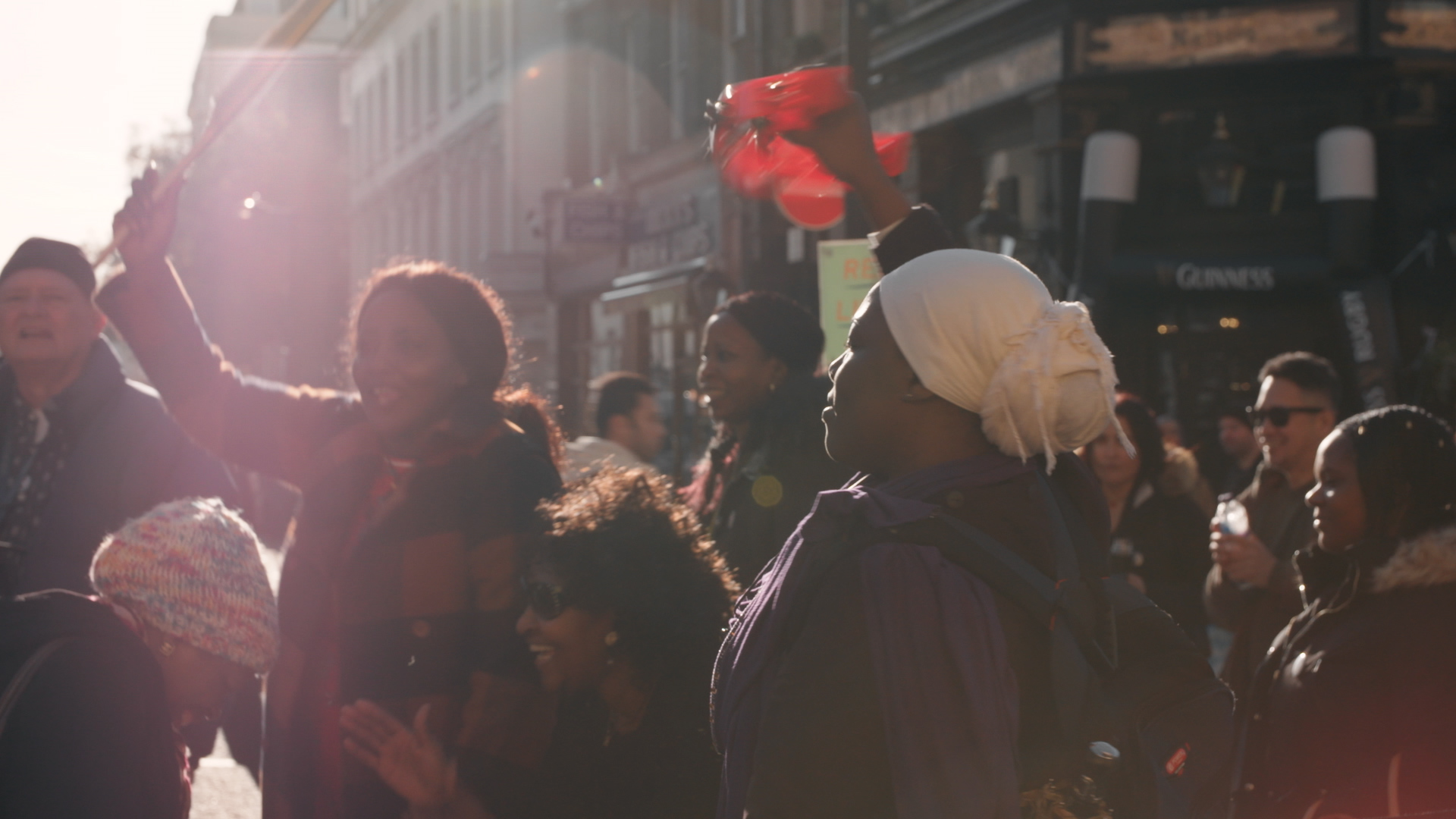 United Voices is available to watch on the Guardian website.

Linkedin
RELATED ARTICLES
OTHER ARTICLES
In his 2008 series, the photographer pictured himself as Angela Davis, Martin Luther King Jr., Malcolm X, and other prominent figures.
The idea that a younger generation is abandoning work has become a popular narrative online, but it doesn’t necessarily reflect reality.
Birdy Chu reflects on documenting the historic moment in which the territory was formally passed back from the UK to China.
Yesterday thousands gathered outside Buckingham Palace after news of the Queen’s death broke.
Cindy Campbell recounts how her brother ushered in a new era of musical culture at a party she held in the Bronx in ‘70s.
A 37-year-old woman shares how her abortion led her to become a clinic worker, and the abuse she’s received in that role.