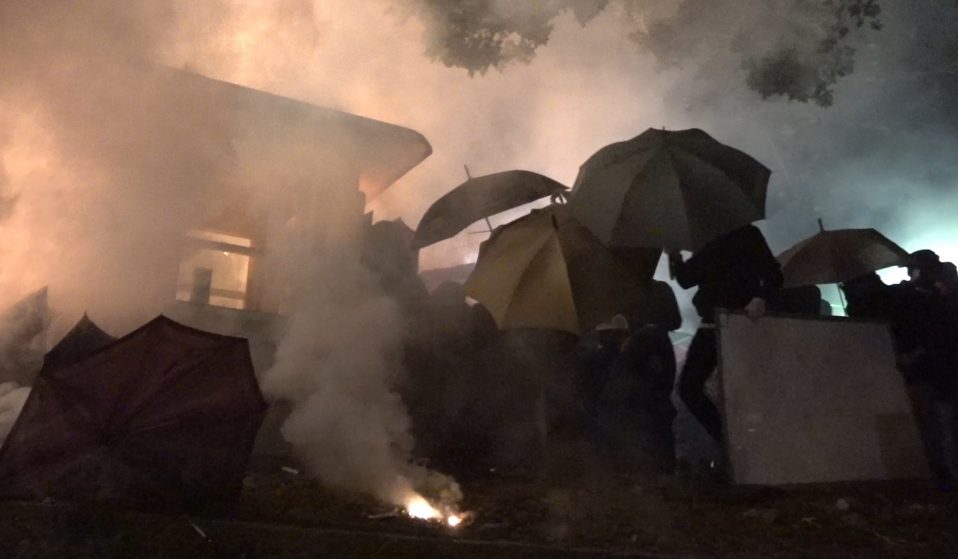 Evans Chan’s new film sees him recording recent action in Hong Kong, before posing the question: what comes next?

Evans Chan’s new documentary sees him recording recent action in Hong Kong, before posing the question: what comes next?

Evans Chan has been making films about Hong Kong for over three decades. His recent documentary, Raise the Umbrellas, followed Hong Kong’s 2014 Umbrella Movement, which saw hundreds of thousands of citizens participate in street sit-ins, protesting proposed reforms to the country’s electoral system.

In 2018, Chan decided to make a companion piece to Umbrellas, just as a new wave of protests hit the country – this time against a bill that would give China the power to extradite Hong Kong citizens accused of crimes. The film, We Have Boots, reflects on the Umbrella Movement, documenting how pro-democracy protests have progressed in Hong Kong.

Just before Huck spoke to Chan about his film, a new National Security Law passed in Hong Kong – a broadly defined law that criminalises “secession, subversion, terrorism and collusion with foreign forces to endanger national security”, thus expanding China’s power there. Journalists and activists with famous faces have started fleeing the country, while hundreds have already been arrested for assembling, chanting or holding signs. “Hong Kong is dead,” stated Jimmy Lai, a newspaper tycoon and pro-democracy supporter.

It’s an uncertain time everywhere. Chan is currently in New York where COVID-19 devastated the city for weeks. “I live by a park, which helps ease the claustrophobia,” he says. “And I’m glad that the city has reopened now, cautiously.”

Why did you decide to revisit Hong Kong protestors and make We Have Boots after Raise the Umbrellas?
It’s only logical, but also sort of coincidental. Lingnan University in Hong Kong had organised a retrospective of my work at the Hong Kong Arts Centre in late 2018 when Raise the Umbrellas would be screened again. I thought of doing a shortish companion piece. But when I started interviewing some of the Occupy/Umbrella leaders, the sense of their worries and concerns about their upcoming trial and likely imprisonment was palpable. Other governmental acts to erode the democratic process were also happening, such as disqualifying elected legislators as well as candidates from the opposition – such as the 21-year-old Agnes Chow, who ran to fill a vacated, disqualified seat in Legislative Council. Young protest leaders were either fleeing the city for political asylum or for further studies. It was a very disturbing trend.

The original version of Boots ran for only 66 minutes. With the unfolding of Hong Kong’s post-Umbrella story, I expanded Boots, incorporating the trial and sentencing of the Occupy leadership. However, their imprisonment ended up pushing the protest movement into a militant, combative direction, when a new threat – an extradition bill that allows citizens in Hong Kong to be tried in China – surfaced. The struggle to stop the bill has prompted intense combats with the police and a rally of two million people on the streets. We Have Boots ends on New Year’s Eve, 2020, as the police cracked down in the Mongkok district with tear gas, rubber bullets, and bean bag rounds.

How have the Umbrella Movement and pro-democracy protests changed over the years between Raise the Umbrellas and We Have Boots?
The Umbrella Movement was a non-violent civil disobedience campaign, during which the most violent act might be the smashing of the front door of the Legislative Council. Not one business shop window was broken during Umbrella’s 79-day occupation. But already, militancy was rising within the movement, as some younger protesters were becoming impatient with non-violent tactics, which they felt didn’t accomplish anything.

When the Occupy leaders received prison sentences for their offences of ‘incitement to commit public nuisance’, you can imagine that the militants were handed the concrete proof of the futility of peaceful protests. They were thrown into jail. And even after peaceful demonstrators grew from a million to two million in street rallies, the government still wouldn’t back down from pushing the extradition bill. Militant activists took the matter into their own hands, besieging the legislative council and successfully blocking the passage of the bill. A vicious cycle ensued in the latter half of 2019, with police deploying water cannons and firing thousands of rounds of tear gas, while combative young protesters stepped to the front with their Molotov cocktails. 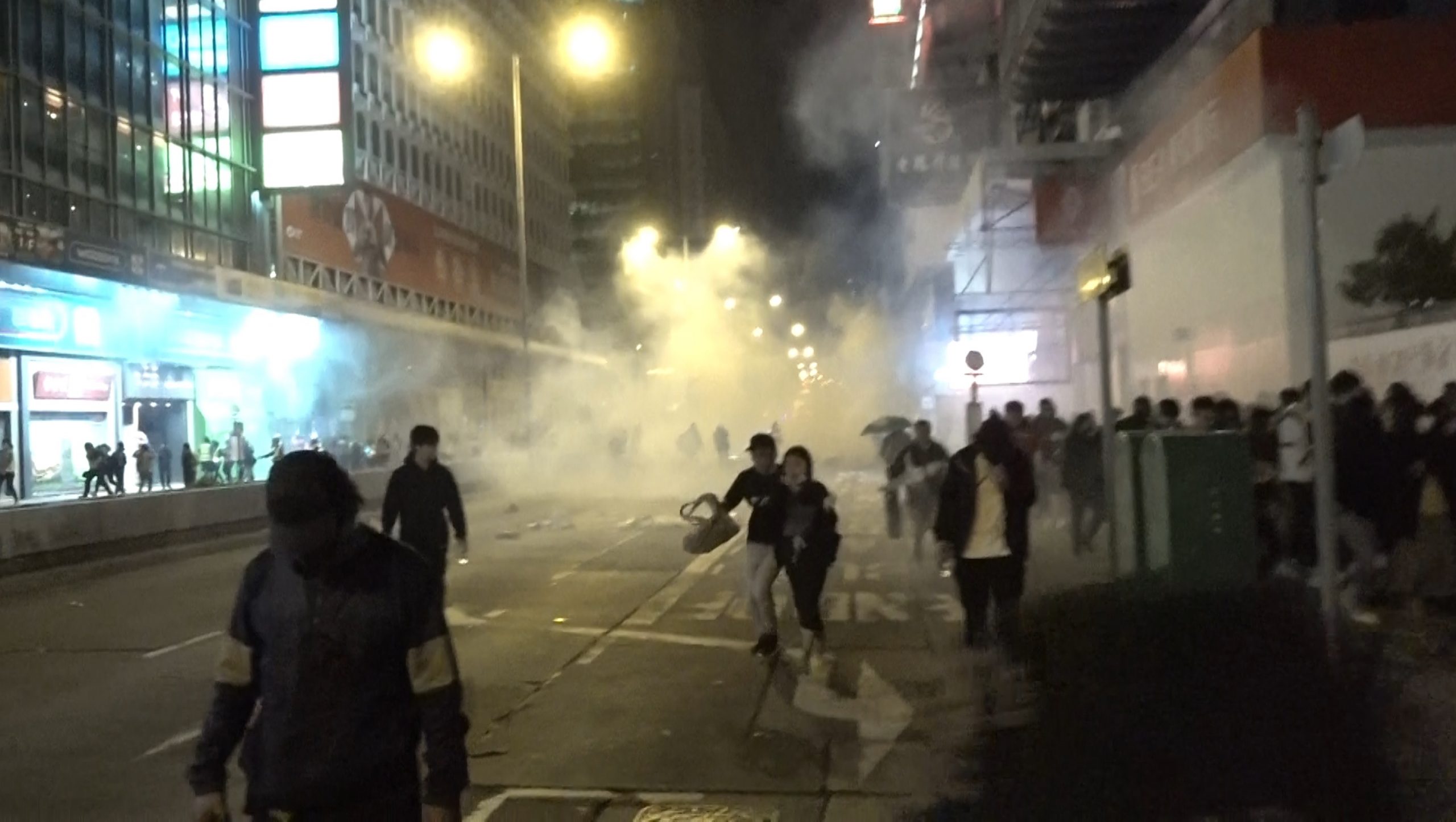 Has the reception and perception of protestors changed over those years for Hong Kong’s people?
Popular reaction to the violent protests had been ambivalent. But in July of 2019, a group of white-shirt thugs invaded a subway station with sticks and metal pipes, presumably targeting protesters.  Yet they ended up beating up passengers indiscriminately. For about an hour, the train stopped at the station. Subway staff were nowhere to be seen. Neither was there any police intervention. That’s when a significant portion of the citizenry in Hong Kong felt personally threatened. Soon public opinions shifted in favour of the violent protesters – such popular support was borne out by the district council elections in November, as pro-democracy candidates trounced the pro-Beijing ones by a high voter turnout.

I wanted to ask about the title, We Have Boots, which I felt conveyed how mass the movement is. Can you talk about how you approached capturing entire protest movements in your documentaries and any of the challenges of doing that?
The title of the film came from a poem by the African American poet, Nikki Giovanni, as read by the legislator Shiu Kan-chun in the film:

We begin a poem

all through the storms

The main challenge of capturing a movement, or any social and political phenomenon, is how to tell it as a meaningful story when the audiences are no longer looking at daily news reports – how to make the audiences get a taste of history in the making. The way to keep them engaged is by unveiling the human stories behind the ‘news’. 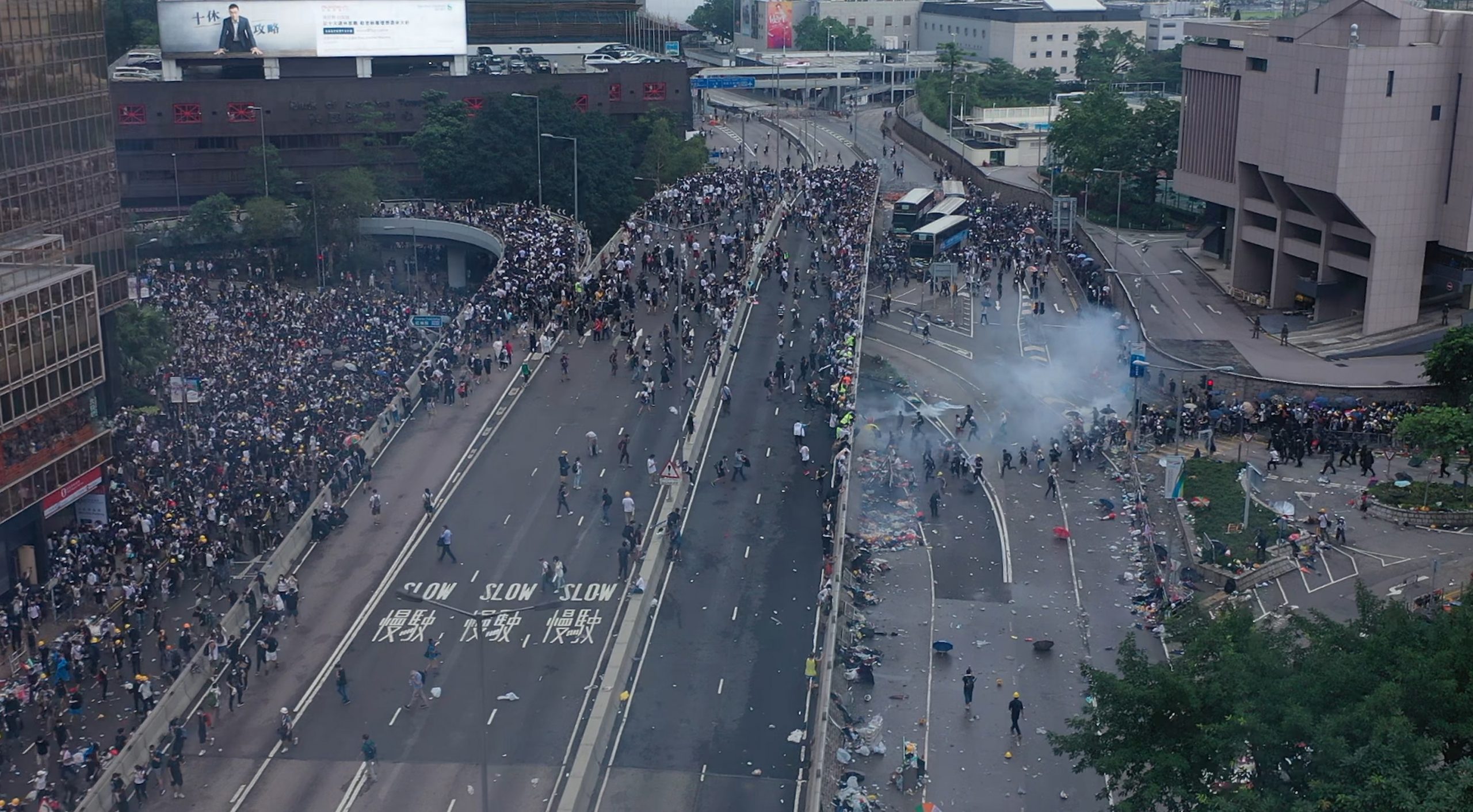 The recent National Security Law that passed is already having a major impact on the protestors and pro-democracy activists. How do you think that law is going to affect the protests as well as Hong Kong more generally?
The newly passed National Security Law not only seems draconian domestically, it also has an extraterritorial reach that threatens anybody on this planet who dares criticise China. Right now, people seem more subdued and apparently intimidated. But protests might resurface after a while, since a lot of the younger folks might not be capable of emigrating. And my interviews with some of the militant black-clad protesters have revealed to me their seething anger and determination to bring China down with them if they can’t keep the Hong Kong they valued.  They called it ‘laam caau’ in Chinese – i.e. mutual destruction. ‘If we burn, you burn with us.’

On a macro level, Hong Kong’s standing as a world financial centre could also be undermined. With China’s direct interference in the judicial system, can the international community maintain faith in the rule-of-law guarantee in financial transactions as in the old days? I sincerely hope that these are unnecessary worries.

It can feel helpless watching what’s happening in Hong Kong and not knowing what to do to help, especially for its diaspora living in other countries. Do you have any thoughts on what people can do to support the movement from overseas?
What is necessary is to keep the Hong Kong story alive and help the international community understand what’s at stake. The Hong Kong story reflects what kind of country China wants to become or the kind of image it wants to project. In many respects, Hong Kong has been China’s vital connection to the global capitalist system. I hope China won’t hurt its interests by pushing America and other countries to do things that may end up hurting China. I myself and a lot of people I know don’t want Hong Kong, or China, to fail.

Raise the Umbrellas faced censorship in Hong Kong. Do you think you’ll be able to screen We Have Boots?
For Boots‘ Hong Kong release, I already had to delete a segment with a protest artist playing the Chinese national anthem on an accordion that may be interpreted as disrespectful, since there is a National Anthem Law passed in early June which banned the ridiculing of the national anthem. With the new law, discussions of Hong Kong independence or self-determination aren’t allowed and slogans like, ‘Free Hong Kong, Revolution of Our Time’ are off limits. And to what extent can the film’s footage of excessive force used by the police be interpreted as inciting hatred toward the Hong Kong or Chinese government?

A documentary is a documentary – it documents what has happened and been said. The only mea culpa I have conceding We Have Boots is that it was finished before June 30, when the new law was gazetted. What legal liability may its screenings after June 30 incur? With all these issues, I think it’s highly unlikely that it could be screened in Hong Kong.

What do you hope global audiences take away from your film?
The aspiration of a people for a better life and better world, no matter how unrealistic or inconvenient for the government that may seem at this point. 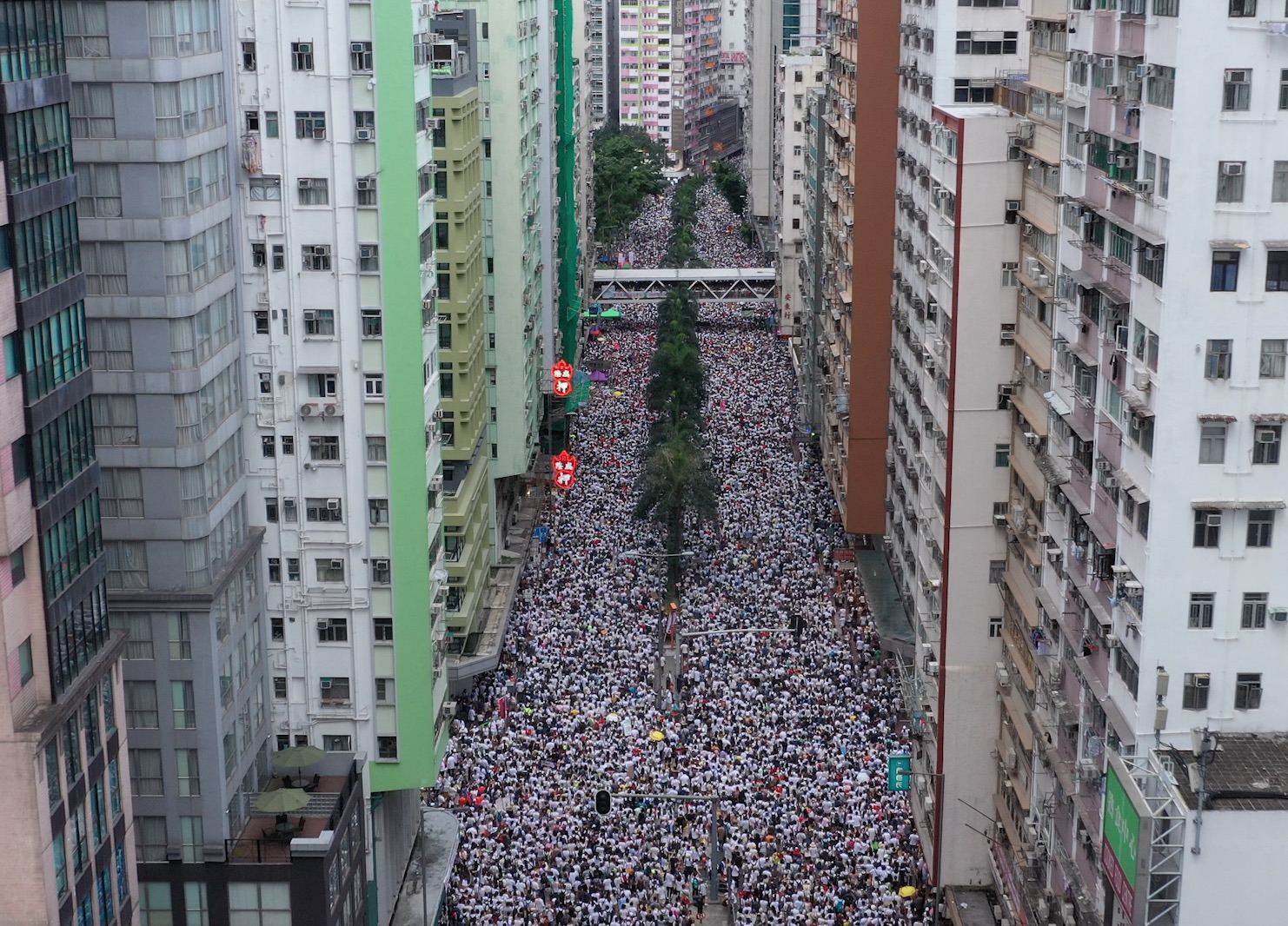 We Have Boots is currently available to watch as part of Sheffield Doc/Fest.

Linkedin
RELATED ARTICLES
OTHER ARTICLES
Following the release of his latest album God Don’t Make Mistakes, the rapper talks horror villains, police brutality and being unafraid to show his vulnerable side.
The situation in Afghanistan remains dire, with many groups facing persecution at the hands of the Taliban.
After news broke last week around an expected reversal of the 1973 landmark law that made abortion legal in the US, protestors gathered in the UK in support of American women.
The group’s leader and cofounder Randy Savvy talks nurturing the next generation of riders and keeping Black cowboy culture alive.
Members of the collective share some of their reasons to run as part of #UnitedBySummits, a campaign that looks to uncover transformative power of the outdoors.
The revered showbiz chronicler recalls his journalistic beginnings, documenting subcultural scraps in the ’80s.