Art & Culture / Film / What made Marie Colvin one of the world’s best war reporters? 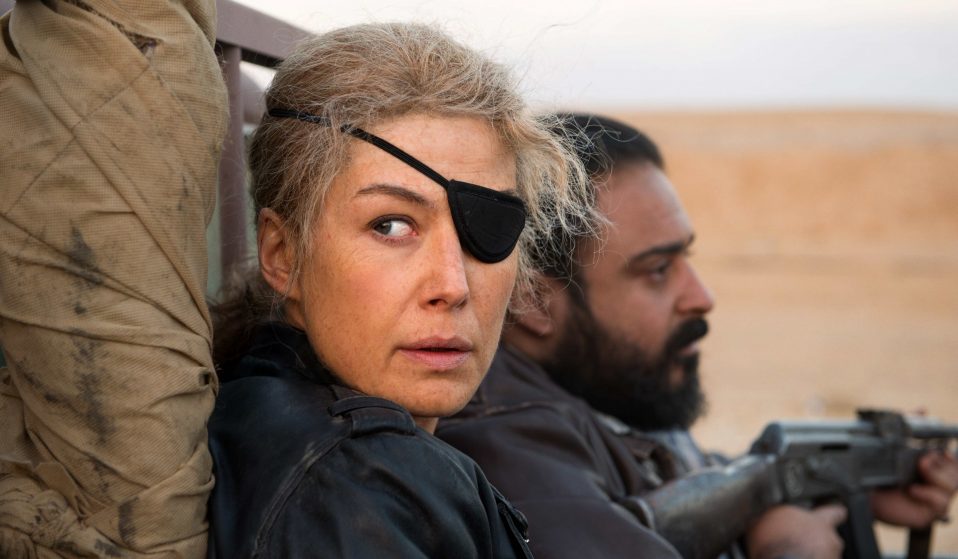 We speak to director Matthew Heineman about A Private War: his new film that pays tribute to the legendary journalist’s life. ‘If there was anything she was addicted to, it was the desire to tell these stories. I think if she felt no one else was going to do it, then she had to.’

We speak to director Matthew Heineman about A Private War: his new film that pays tribute to the legendary journalist’s life. ‘If there was anything she was addicted to, it was the desire to tell these stories. I think if she felt no one else was going to do it, then she had to.’

At the opening of A Private War a camera pulls out of a devastated landscape; the air is thick with dust and smoke, rubble covers the streets, buildings collapse – their windows are giant gaping holes. Over the war-torn scene of Homs in Syria, we hear journalist Marie Colvin say: “I cared enough to go to these places and write in some way, something that would make someone else care as much about it as I did at the time.”

This statement underlines Colvin’s life – she was a committed war reporter – traversing the globe to share the stories of civilians trapped by Assad’s regime, or families uncovering the mass grave of their loved ones in Iraq. In telling Marie’s story, director Matthew Heineman not only celebrates the bravery of this tenacious journalist but also recaptures the suffering of many of the people she met.

An acclaimed documentary filmmaker – twice winning the Outstanding Directorial Achievement in Documentary Award for Cartel Land and City of Ghosts – Heineman turns his hand to fictional filmmaking for the first time. Although A Private War is based on true events, as Heineman was looking back on Colvin’s life he felt his usual vérité approach to documentary making was unsuitable.

Rosamund Pike embodies Colvin, right down to her expensive La Perla underwear (“If anyone is going to pull my corpse from a trench, I want them to be impressed”). She underwent extensive training to recreate Colvin’s distinctive posture and gravely American accent, delving into the psyche of a woman who spent her life chasing war in order to find the suffering humans at the heart of it.

From Sundance Film Festival, Heineman speaks to Huck over the telephone about why he was driven to expose Colvin’s own story.

Marie spent her life telling other people’s stories, so why tell hers?
I think we live in a world where journalism is under attack, so it felt like a very timely story to tell. For my own work as a documentary filmmaker, I have tried to put a human face to conflicts around the world, and in that respect, I very much empathised with Marie and what she tried to do. And then also with my work, I visit dangerous situations in conflict zones, so I know that bizarre feeling of coming home and having those thoughts and images linger with you. It felt like a film I had to make.

Marie asks “in covering war, can you really make a difference?” 500,000 people have died in Syria, so the evidence might suggest the answer is “no.” What do you think? Did her reporting really make a difference?
I think she had a very unique ability to create an empathetic connection to people who felt very far away. It is so easy to keep these conflicts at arm’s length, it is so easy to not engage with them, and I think she had this incredible ability to create human connections between her readers and people in Afghanistan or Syria through the detail in what she wrote. She didn’t necessarily care about the bomb or the size of the gun, she cared about human beings, she really tried to humanise these conflicts that are so often written about with geopolitical context.

In the film, we see Marie return time and time again to incredibly dangerous situations, even when she is told not to. She talks about doing it because she cared, but do you think part of her compulsion to go was because she was addicted to it?
I think if there was anything she was addicted to, it was the desire to tell these stories. I think if she felt no one else was going to do it, then she had to. She always wrote about the poor civilians that got caught in the crossfire and that was what she always fought for and risked her life for. She was also quite competitive and loved getting that scoop and that front page. I think she felt important when she was at war and when she was telling these stories, which contrasted with her chaotic, messy and complicated life at home. I don’t think she was an adrenalin junky or excited about being shot at, I think she was filled with fear and she pushed through that to tell these stories.

You made the decision to use real refugees and victims of war in the film as extras – why?
I wanted to bring these war zones to life and make them feel as real as possible, and a huge part of that is working with non-actors and with refugees from the various countries that we are depicting. They brought an enormous amount of emotion and gravitas to set that inspired everyone. It made it quite clear as to why we were making the film – that was really important to me. In the scene in the hospital at Homs, the man who brings in the young boy was a Syrian refugee who was from Homs, and he was at a protest one day and his two-year-old nephew was shot off his shoulders. The trauma and the grief that he bought onto set was almost unbearable.

At one point, Rosamund couldn’t handle it and walked off set. She said: “What are we doing here? Are we exploiting this man?” And I said: “No. This is something I deal with on a daily basis, making documentaries, and it is something Marie dealt with as well. You have this human instinct to want to give them a hug, but your job and my job and Marie’s job was to tell these stories and to capture these stories – he wouldn’t be here if he didn’t want his story to be told.” 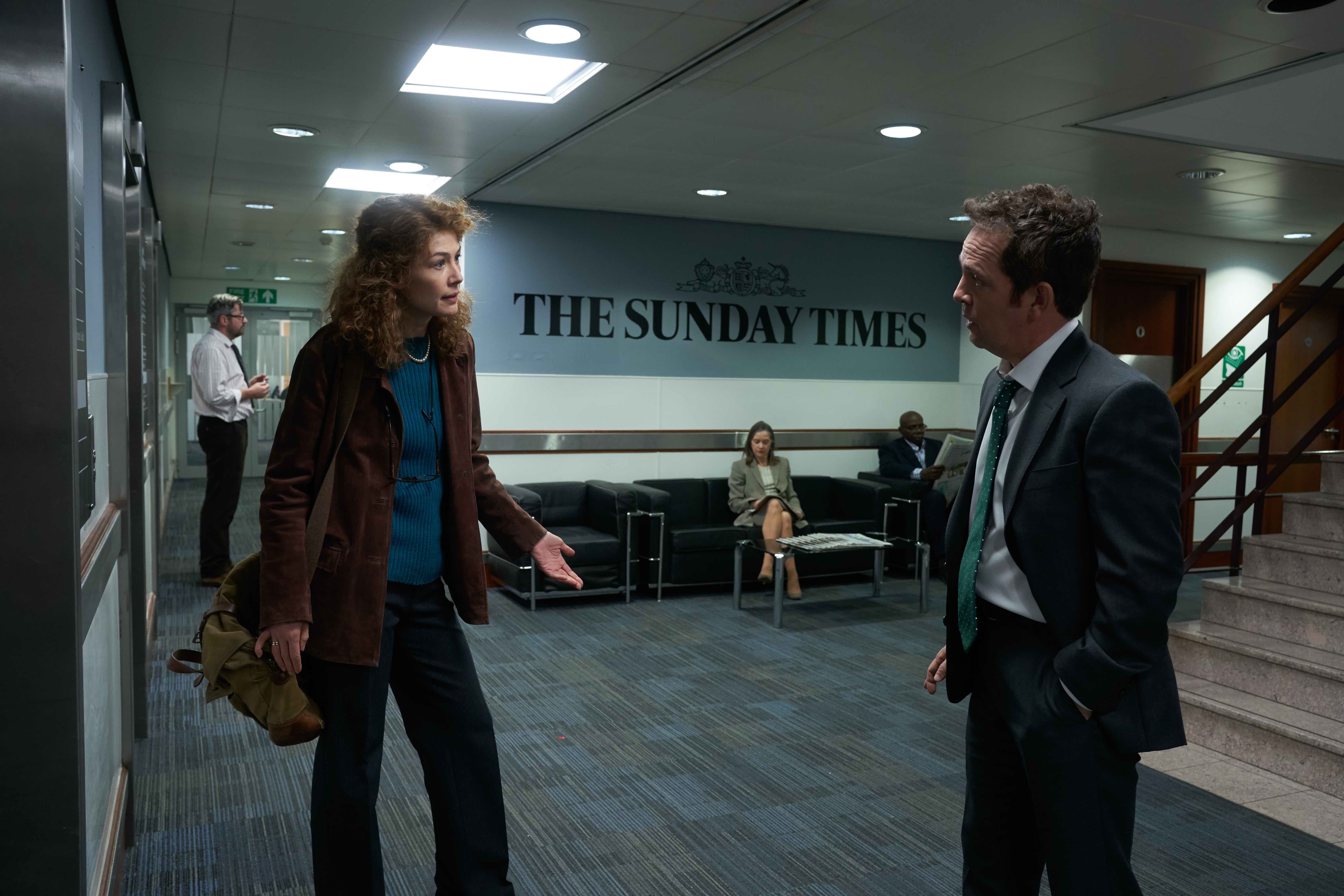 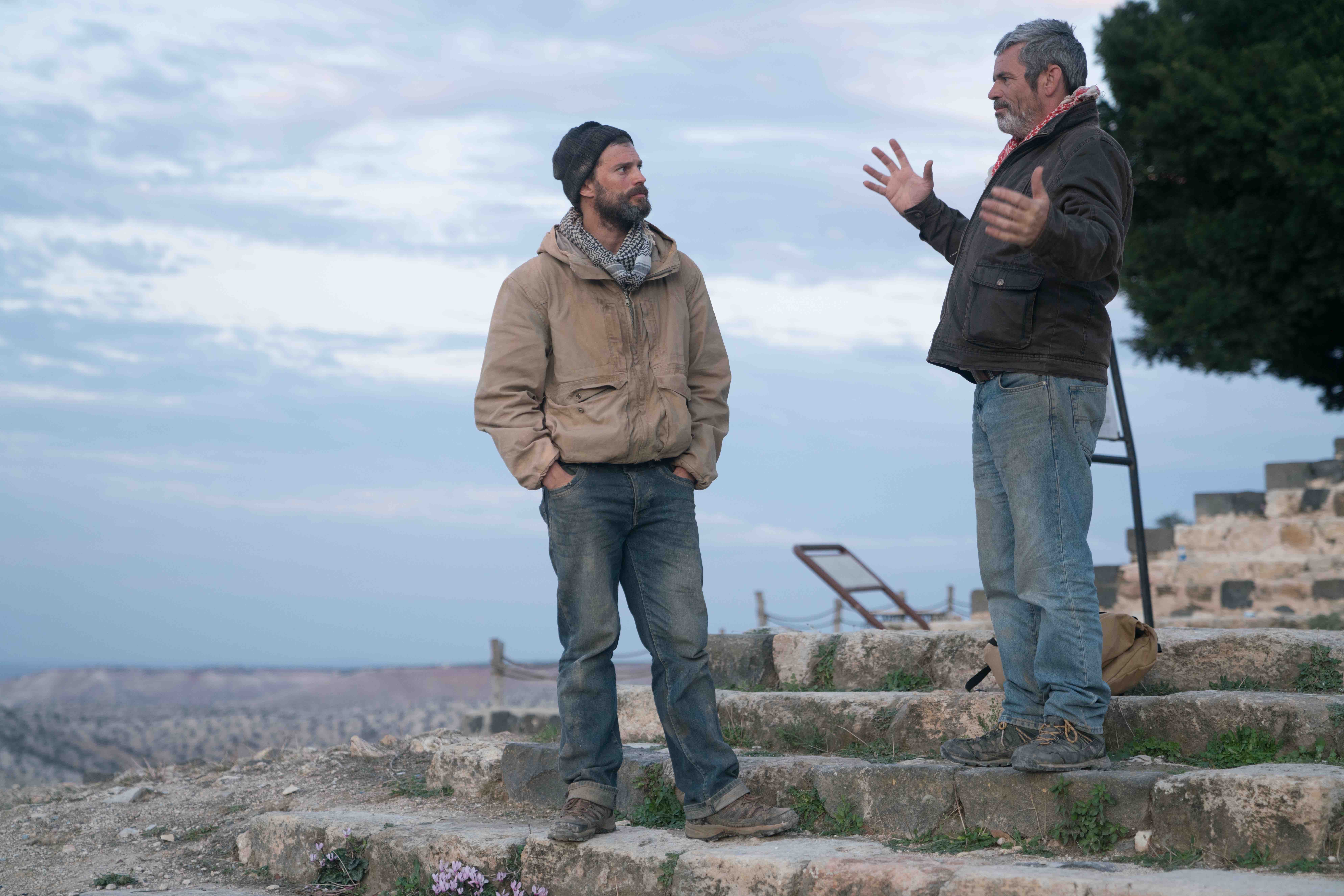 There is a complete contrast between her life in war zones and her luxurious life in London, and yet she cannot escape the thought of war at home – was it important to you to reveal how much of an impact her reporting had on her everyday life?
Yeah, a big goal of mine was to try to examine what pushes someone to go these places and the effects this had on her mentally and physically. Although it doesn’t make for a traditional film, I wanted to capture the inherent dramatic structure of being at war, and examine the effects of PTSD that grew and haunted her more and more as her career went on. I think PTSD is something that hasn’t necessarily been well depicted in film, so it was very important to me to show how war often haunted Marie when she was at home.

Marie did much more work than what you could fit into the film, how did you select what you wanted to cover?
I had to work out the goal posts of where we began and ended the film. I didn’t want to make a biopic, and so the key question was when to start? And obviously, the attack in Sri Lanka was a massive inflecion point that changed her forever, so that became quite a logical place to begin the film. Losing her eye became a defining characteristic for her, what with the eye patch and it was something she also became quite well known for.

Do you think there are still journalists like Marie?
Yes, although I think the world of journalism has definitely changed. In some ways, Marie is a bastion of old school journalism that isn’t as prevalent as it once was – there is less money in long-form investigative journalism. She would go and embed for weeks and months, and that doesn’t really happen that much anymore. Also, when she started her career the dangers of being a war correspondent were that of being at war, of being blown up, of being shot at – the idea of being a target for being a journalist, for telling stories, wasn’t really in the lexicon of options. Now, unfortunately, we know that she was deliberately targeted by the Assad regime for writing those stories out of Homs, and sadly since her death, we’ve seen countless examples of other journalists who have been targeted and killed. 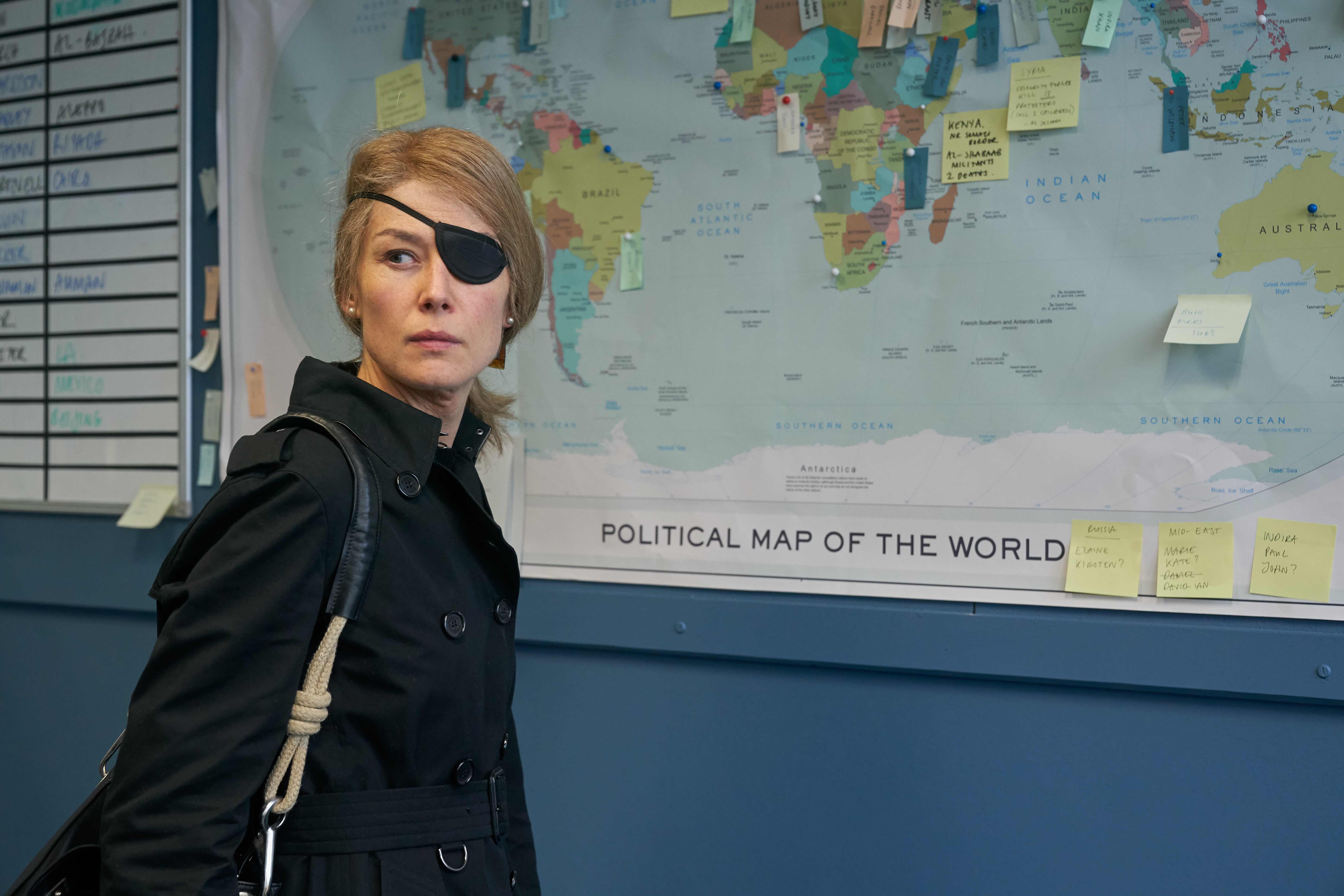 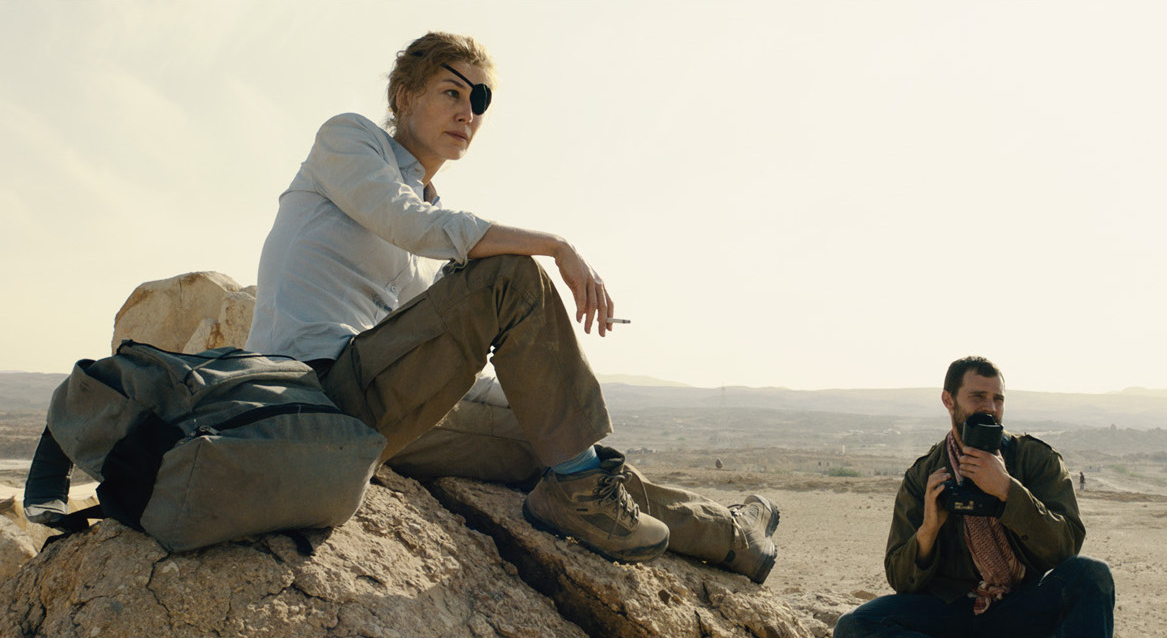 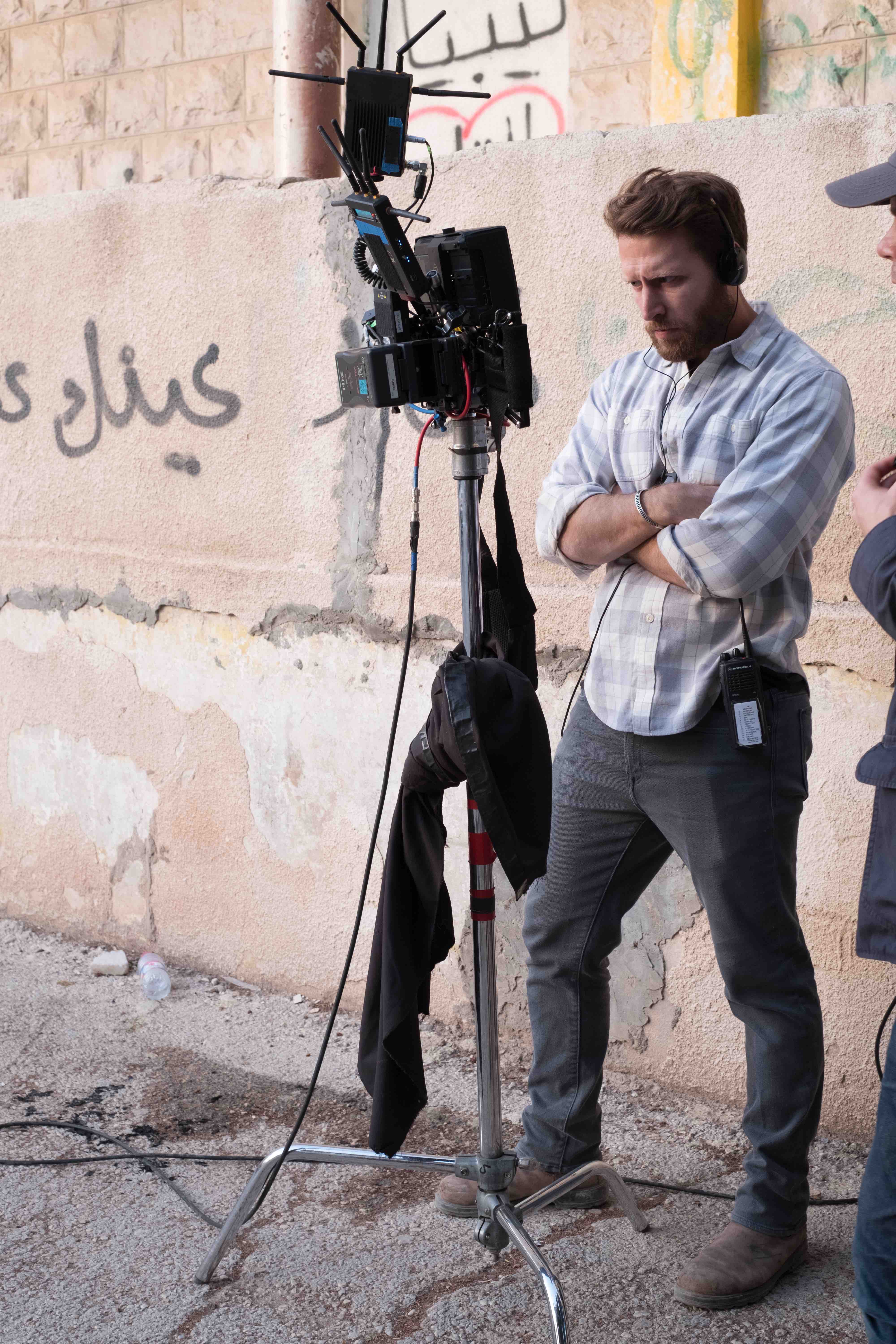 A Private War will be shown for one night only, with a Q&A with Rosamund Pike, Jamie Dornan, Paul Conroy and Matthew Heineman, and broadcast live to cinemas February 4. It will be released in cinemas on February 15.

Linkedin
RELATED ARTICLES
OTHER ARTICLES
In Sheffield, food delivery drivers are fighting back against one of the giants of the gig economy.
Leading art critic Robert Storr reflects on the photographers – from Seydou Keïta, to Malick Sidibé, to Carrie Mae Weems – who helped to transform and redefine the medium.
Those set to be impacted by the governments ’undemocratic’ bill explain why it risks silencing them.
From Brooklyn gang members, to Welsh miners and the residents of East Harlem, Bruce Davidson used his camera to shine a light on the most marginalised.
Photographer Yan Morvan revisits a radical moment in history, which saw the emergence of a fiercely-rebellious spirit among the UK‘s youth.
The musician, DJ and founder of Monika Enterprise reflects on a career defined by revolution and rule-breaking.