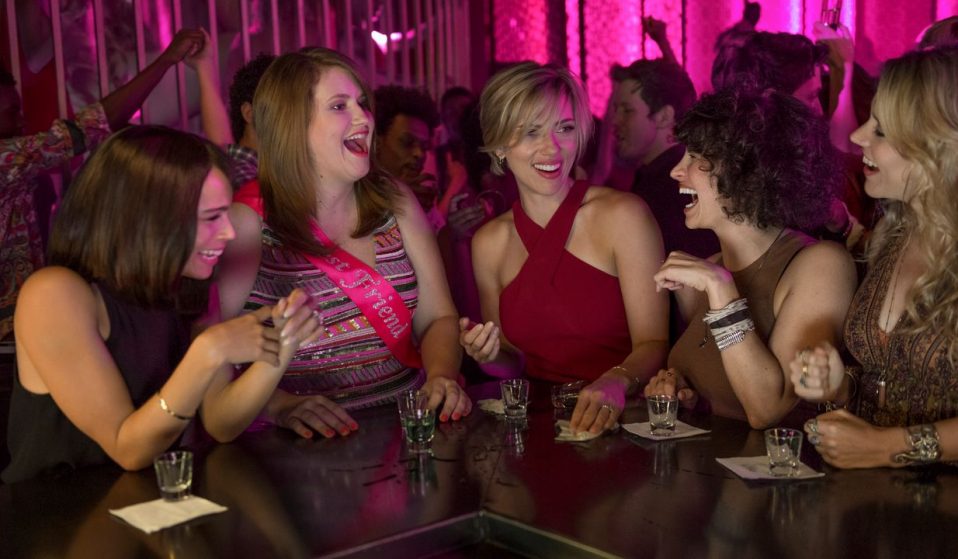 Writer Megan Nolan bravely ventures into Netflix’s new releases, in an attempt to figure out if anything is even worth our time anymore. This week, Samuel Jackson makes his return as Shaft, and Scarlett Johannson kills a stripper.

Writer Megan Nolan bravely ventures into Netflix’s new releases, in an attempt to figure out if anything is even worth our time anymore. This week, Samuel Jackson makes his return as Shaft, and Scarlett Johannson kills a stripper.

“What if (beloved established entertainment) but Woke?” is becoming a lazy go-to renewal idea for quite a few franchises and characters, and here the Shaft universe gives it a whirl, with not entirely objectionable results. I expected to be actively annoyed by it but found it merely silly.

This is the fifth film in the Shaft film series, a comic tonal departure from both its blaxploitation origins and the straightforward 2000 thriller which immediately precedes it. Samuel L. Jackson plays John Shaft, nephew of the original Shaft (played by Richard Roundtree in 1971) though is also pretty much the same character as him. His son, John “JJ” Shaft Jr (Jessie Usher) has been estranged from Poppa Shaft for his whole life, since his mother whisked him away in infancy following a shoot-out where Baby Shaft was strapped in the back seat of the car.

Now, in adulthood, JJ is a desk-bound FBI guy dealing with cybercrime and not getting his hands dirty in the streets. He wears softboi skinny jeans and owns an espresso machine, and is therefore the opposite of tough Poppa Shaft, who is still a louche renegade Private Investigator. When his best friend dies in mysterious circumstances, JJ reaches out to Shaft to help him find the truth and the two become embroiled in a sort of familial version of the rookie/ old guard cop scenario.

JJ is positioned as a humorously right on foil to Shaft’s anachronistic dinosaur, which amounts to him rebuking his father for saying “homo” and holding a modicum of bare minimum respect for women. He doesn’t like guns, but is a dab hand at some sort of elegant but deadly dance-based martial arts practice. There doesn’t, in the end, seem to be such a big gulf between them as would create any real tension, but we should be grateful for this. Worst case scenario this could have been two hours of JJ correcting Shaft on appropriate gender linguistic practice and insisting that millennials have the right to identify as toasters or whatever.

Ultimately this bounces along amiably and is occasionally quite funny (both times I laughed aloud, incidentally, were moments provided by the marginal female characters, JJ’s mother (Regina Hall) and his love interest Sasha, played by Alexandra Shipp). Samuel L. Jackson does what he always does but as ever it does the trick. The best part arrives with an extended cameo from Richard Roundtree as Shaft’s dad, who brings some humour to what would otherwise be an interminable gunfight scene.

WORTH A WATCH WHEN HUNGOVER/ DRUNK? Yeah, grand for a hangover, it whizzes by happily enough and the violence is stupid enough not to be jarring.

I sometimes wonder how films like this manage to attract not just one but half a dozen well regarded, good actors. It’s not just that Rough Night is bad. The series of episodic films like New Year’s Day, Valentine’s Day, Mother’s Day etc are plainly terrible and filled with A-List stars, but you can understand that – they’re harmless unapologetic money spinners which probably offer huge compensation for what amounts to a half day of filming. But Rough Night is something else. Released two years ago to embarrassed silence and lately acquired by Netflix, it boggles the mind that a script like this ever got greenlit, let alone attracted its stars (Zoe Kravitz, Scarlett Johanssen, Kate McKinnon, Ilana Glazer, Jillian Bell, to name a few).

Is it like a pyramid scheme where they get one good actor and then use that to tempt the rest? Did Ilana Glazer think “Oh Kate McKinnon’s in it, it can’t be that bad”? Did they all? I’m sorry to say, if so, that they were wrong and it is not only that bad but much much worse.

Scarlett Johanssen is Jess, an overworked politician whose college pals have arranged a bachelorette weekend in Miami for her. Various tensions between the original gang of friends and an interloper new best friend (McKinnon) arise, but the main plot begins when the group accidentally kill a stripper and have to find increasingly absurd ways of concealing the body and covering up their crime.

I mean you can kind of stop there, really, can’t you? Surely that single sentence pitch – “group of women kill stripper and hide his body, but it’s a comedy caper” – should have been enough to get someone fired. Rough Night has the attempted tone of films like Bridesmaids, Bachelorette and Date Night, but it is impossible to wring much enjoyment out of a caper based on hiding a corpse of someone you have killed, seemingly without remorse, because – guess what! – you can’t really enjoy the zingers and quickfire banter between a group of people who are discussing foam parties and pizza orders while the blood is still drying. There are a very few quick funny moments, but they don’t redeem much.

Creating actual successful black comedy out of a situation like hiding a corpse would necessitate a departure from the rote comedic tone which has spread lazily outward from Judd Apatow, and would involve a lot more invention than the writers of this film had to offer. The performances – all absolutely competent and probably passably funny in a different film – do nothing to drag this film out of the cultural nadir toilet it inhabits.

WORTH A WATCH WHEN HUNGOVER/ DRUNK? Not even.

Linkedin
RELATED ARTICLES
OTHER ARTICLES
A recent High Court ruling against the right to wild camp in Dartmoor National Park sparked the largest land protest in history – and campaigners say their fight is not over yet.
A new law change is enabling Britain’s donor-conceived children to know the truth about their origins – but campaigners say the fertility industry must do more to protect people.
At his West Bank restaurant, Fadi Kattan established himself as the voice of modern Palestinian cuisine. Now, he’s bringing his innovative, bold flavours to the UK’s capital.
Filmmaker Laura Poitras discusses her new documentary which traces the remarkable life of the artist-activist and the impact of her battle against the US opioid crisis.
A new film from Berghaus traces the story of Adam Raja, who left behind a turbulent upbringing to discover the healing power of climbing.
Activists and campaigners are fighting back against new laws that would seriously undermine the ability to take industrial action, calling it an attack on fundamental workers' rights.