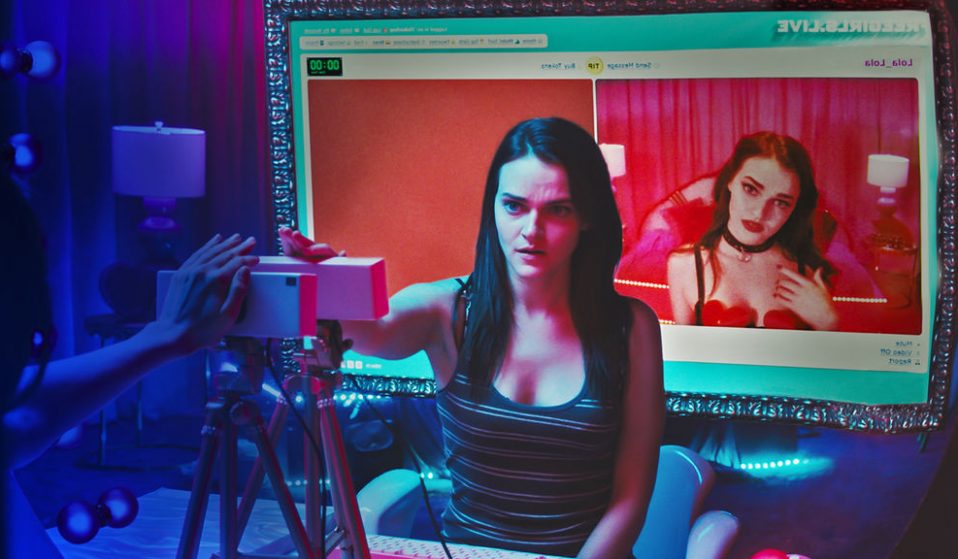 Writer Megan Nolan bravely ventures into the latest Netflix Original releases, in an attempt to figure out if anything is even worth our time anymore. This week, it’s Cam: an uncanny (and actually good!) thriller about social media and sex work.

Writer Megan Nolan bravely ventures into the latest Netflix Original releases, in an attempt to figure out if anything is even worth our time anymore. This week, it’s Cam: an uncanny (and actually good!) thriller about social media and sex work.

In the first few weeks after I moved to London, somebody used photos I had posted online to pose as me on OkCupid.

I was sitting in Holborn on my lunch break from the temp job I was working, pushing a pot of hardening hummus from Leon into a little kale salad, when I got a text from my friend Crispin.

“I didn’t know you were using OkCupid,” he said. I startled, and asked what he meant.

He sent me back a screenshot of myself on OKC, with the name “bitter_branches”. The profile picture was one I had taken just a few days before in the mirror of an office lift, wearing a white shirt tucked into high waisted blue shorts, eyes cast down towards the phone and red lipstick smirking slightly.

“Someone is using my pics to catfish on OKC. Most chic thing that’s ever happened to me tbqh” I tweeted, and I did find it weirdly flattering and weirdly funny. But it was also so, so uncanny, and not just for the most obvious reasons. It was strange, certainly, to see someone using my image as currency of their own. But stranger still was that the fake-me was a version of myself I had been teetering on the edge of actually becoming.

I was single, technically, although I did not want to be. I had begun to think that I should force myself to accept it by beginning to date again. I had tested the waters by telling my ex that I had been asked out (true) and that I didn’t know whether to say yes (false). Predictably shitty and unclear conversations ensued, and I still had not committed to putting myself out there.

So when I sat there in the baking June summer, the hottest I had ever known in a place I lived, staring at myself on the screen, it was all so tangibly close. The fake-me was so almost the real-me that I felt fondly towards her, as well as wanting to kill her.

I reported the profile and it was removed swiftly, but I wished afterwards I had not been so hasty. I wished that I had waited and made a profile of my own, struck up a conversation with me, see what I had to say. It would have been nice to know what it was like out there, before I came and became her myself.

It’s so good! Like, so, so good! It’s the perfect amount of nasty without feeling gross and exploitative. Madeleine Brewer – who you’ll recognise from The Handmaid’s Tale and Orange Is The New Black – is consistently brilliant. She nails it from start to finish, from being so cute and charismatic that you can totally see why she’s making so much coin, to her visceral horror and disgust as she watches fake-Lola deep-throat a gun to the delight of her followers.

Cam captures the sheer ickiness of compulsive ghoulish viewers who aren’t sure whether they want to fuck Lola or murder her, without being hysterical about it, and – crucially – without condemning the sex workers themselves. I was pleasantly surprised by how equitable the approach to sex work was here; the ending resists an easy redemption narrative, and continues to validate sex work as a career. When I looked up the team behind this I found that was probably because a former sex worker, Isa Mazzei, had co-written Cam. Fucking yes! I want to live in a world where we can have an amazing horror film about sex work which doesn’t torture or demean the sex worker, written by an actual sex worker. This is God’s work.

WORTH A WATCH WHEN HUNGOVER/ DRUNK? Yes to drunk, no to hangover – it’s too tense and claustrophobic for The Fear.

Linkedin
RELATED ARTICLES
OTHER ARTICLES
Ahead of the release of his new album, the producer reflects on his battle with drug use, getting into painting and what Madonna taught him.
Photographer Anne-Marie Michel captures the women who through determination and strength are forging their own way in a male-dominated industry.
With the Women’s Euros in full swing, last week saw glorious, sweaty celebrations take place in a dedicated, safe space for female and non-binary fans.
A new series of photos by Johny Pitts shines a light on communities and subcultures that have all too often been overlooked.
The author discusses her new memoir, which offers a sobering reflection on the racism and otherness she’s experienced along with a joyful celebration of her culinary heritage.
The Conservative leadership contest has exposed an obvious truth: whether our next prime minister is a woman, or a British-Asian man, they will continue to fan the flames of division.