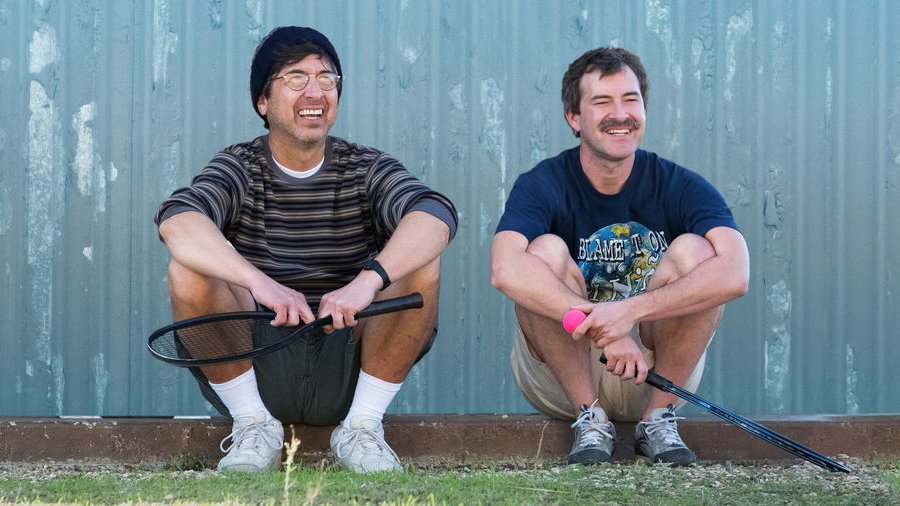 Writer Megan Nolan bravely ventures into Netflix’s Original releases, in an attempt to figure out if anything is even worth our time anymore. This week, it’s whimsical ‘cancer comedy’ Paddleton and the uncomfortably cliched Ideal Home.

Writer Megan Nolan bravely ventures into Netflix’s Original releases, in an attempt to figure out if anything is even worth our time anymore. This week, it’s whimsical ‘cancer comedy’ Paddleton and the uncomfortably cliched Ideal Home.

You can not beat a gentle cancer comedy! I’m kidding, these things are usually awful.

Adam Sandler in Funny People, Joseph Gordon Levitt in 50/50… forgive me, but I can not wholly enjoy the gentle whimsy and life lessons wrung out of terminal cancer. It’s not that the films are crass necessarily, it’s that the sort of cross-eyed white-washed saccharine American tendency to Learn Lessons becomes vaguely repellent when applied to a thing as common and brutal as cancer. Watching someone you love die of cancer is not usually the beginning of a life-enriching adventure, it’s just traumatic and devastating.

Paddleton, one of the slew of Duplass Brothers Productions commissioned by Netflix, has many of the signs of the Whimsical Cancer Comedy. When Michael (Mark Duplass) is diagnosed with terminal cancer and is given less than six months to live, he decides to take control and end his own life. So he asks his neighbour and best friend, Andy (Ray Romano) to help him and be with him when he does.

That’s pretty much the plot, and its sparsity is a good thing. The advertising around this makes much of a road trip the two take to buy the necessary medication, and while this does briefly veer into potential Bucket List territory when the two visit an ostrich farm, it’s not the point of the film. No resolutions manifest, no miracles occur. Thank God.

This is a small lowkey story of a friendship between two essentially solitary people. Both characters are a little strange, a little unfit for social life. They can’t do small talk, preferring to stay in together watching Kung Fu films and eating frozen pizzas than to go outside or meet new people. One funny and sad scene in a hotel hot tub with an interested woman reveals Andy to be devastatingly terrified of intimacy. Their quiet insular friendship could be played for laughs, we could be told to find it pathetic, but we aren’t and that’s what made me like this film so much. It’s a small life that they share, but that doesn’t make it a bad one, or an incorrect choice. At one point Michael confesses to Andy that he was once briefly married. “After that,” he says, “I thought I was meant to be on my own. But then I came here. With you. And I thought: ‘This is my spot. This is where I belong.’”

And then (SPOILER ALERT) the time comes, and Michael does actually die, another departure from most of these kinds of films, and it’s actually pretty agonising to watch – this still young-ish man terrified to die, and his clumsy repressed friend crippled with love lying next to him. I wasn’t expecting to absolutely howl crying at a film starring Ray Romano, to be honest (who is great in this incidentally, both of them are, but Romano’s baleful face seems at times to stretch to breaking point with all the emotions his character can’t express). I’m tearing up again just thinking about it! God!

There’s no happy ending, really, only a hopeful indication that still-weird, still-insular Andy might have learned from the more socially receptive Michael to be ever so slightly more open to new connections now.

WORTH A WATCH WHEN SOBER? Yes, although for obvious reasons it will be a hard watch if you have sick loved ones.

WORTH A WATCH WHEN HUNGOVER/ DRUNK? If you’re *gently* hungover I say yes.

Ideal Home seemed so obviously like it would be terrible to me that I sort of thought it might confound me and be amazing somehow, but, alas.

Steve Coogan plays Erasmus Bumble, an extravagant celebrity chef living in Santa Fe with his put upon boyfriend Paul (Paul Rudd). But their picturesque lifestyle is interrupted when a grandson Erasmus didn’t know he had turns up at their door. Erasmus’s estranged addict son has been imprisoned, and sent his kid Bill to wait it out at the Santa Fe ranch of Instagram dreams. As you can imagine, a working-class child poses some hilarious problems to the minted duo – like enjoying to eat fast food and swearing – but they manage to overcome this and eventually love him. Bill settles down into his new more stable life – but then his dad is released from prison.

Ok, first thing’s first: Paul Rudd could get it as gay Paul. He is always fit but when he’s styled gay? Mother, may I. Unfortunately, this is terrible. He and Coogan have zero chemistry, and say very self consciously Gay things all the time. “He’s like the gay Butch Cassidy,” mutters Paul watching Erasmus on a horse – ah yes, gay people are always saying “He’s like the gay X” about people.

Steve Coogan, while one of the world’s funniest comic actors IMO, really can not do anything outside of his usual thing. When the kid is injured in one scene, his attempt to look sad is just a melancholy gurn.

Worst of all, though, are this film’s horrific politics. We are supposed to hope that this kid gets away from his poverty-stricken addict dad – the same man who Erasmus abandoned as a child, don’t forget. At one point, the kid puts on an obscene little rich-boy suit and carries some kind of ornamental umbrella, parroting some crap about the gourmet food he now craves instead of Taco Bell. They all laugh and the car zooms off into the rich-person sunset. Oh goody, you have turned a child into a bourgeois pig like you! Hurray!!

WORTH A WATCH WHEN HUNGOVER/ DRUNK? NO.

Linkedin
RELATED ARTICLES
OTHER ARTICLES
With the virus now a global health emergency, we must take steps to fight misinformation and demand a swift UK-wide vaccine roll out, writes Phil Samba.
A new series of photos by Johny Pitts shines a light on communities and subcultures that have all too often been overlooked.
The government’s brutal crackdown on NGOs has left victims of rape without anywhere to seek help. And now, as the country plays a key role is Russia’s war, things are only getting worse.
After rewriting the indie rulebook with her devastating songs about romantic longing, the singer-songwriter is now imagining a future in which the artist is no longer a product.
With the Women’s Euros in full swing, last week saw glorious, sweaty celebrations take place in a dedicated, safe space for female and non-binary fans.
The author discusses her new memoir, which offers a sobering reflection on the racism and otherness she’s experienced along with a joyful celebration of her culinary heritage.