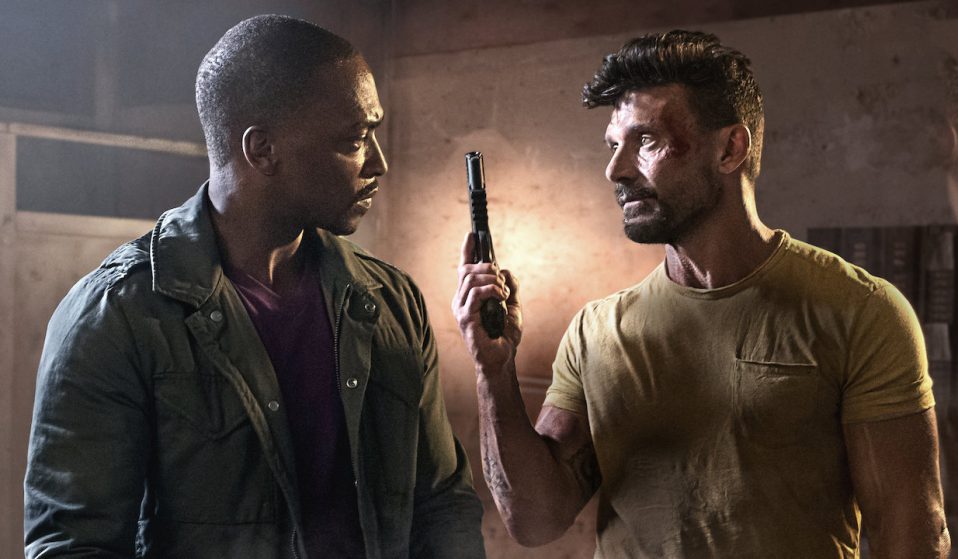 Writer Megan Nolan bravely ventures into the latest Netflix releases, in an attempt to figure out if anything is even worth our time anymore. This week, its confused cop remake Point Blank, and meandering polyamory drama You, Me, Her.

Writer Megan Nolan bravely ventures into the latest Netflix releases, in an attempt to figure out if anything is even worth our time anymore. This week, its confused cop remake Point Blank, and meandering polyamory drama You, Me, Her.

There were moments early in this film when I thought everything was working. I thought it was an unremarkable but solid little thriller, one I might even pay the ultimate Netflix compliment to – that I wouldn’t be upset had I paid money to see it in a cinema. It has a hunky lead, a handful of strong character actors, and a workably tense plot by way of a kidnapped pregnant woman ready to pop at any moment while being dragged through various warehouses and hideouts. Sadly, though, an unignorable unevenness leapt out about a third of the way in and resurfaced often enough to make this merely Netflix-fine; I would in fact be upset had I paid to see it in the cinema.

Based on an acclaimed 2010 French film of the same name, it stars Anthony Mackie of Avengers fame as overworked nurse Paul, who alternates shifts at the hospital with shifts looking after his heavily pregnant wife Taryn (Teyonah Parris of If Beale Street Could Talk). When a mercenary killer named Abe (Frank Grillo) ends up in his care, shot in the midst of what appears to be the execution of the DA, Paul’s cosy domesticated life is soon exploded. Abe’s brother Matteo kidnaps Taryn and instructs Paul to let Abe, now under police watch, free from the hospital if he wants her to live. From here on there are glaringly obvious signalled twists, corrupt cops, angry drug dealers, a hard drive hot with evidence and Paul having to learn to be an action hero instead of an everyman. Marcia Gay Harden and Boris McGiver from House of Cards play the serviceable but utterly by-rote police.

This could very easily have been quite a nice and taut film – especially coming in at under 90 minutes. But a third of the way in it loses sense of itself, and can’t decide whether it’s a thriller or a comedy or a cop drama. Most unforgivable are the bizarre soundtrack choices: perky ’80s music plays over a suicide scene and other moments of high stakes stress, a move I’m not convinced was intentionally ironic. There is, too, a direly unfunny interlude involving a cinephile drug dealer banging on about William Friedkin and wide-angle shots, serving only to remind you of how artless a proposition Point Blank is itself.

WORTH A WATCH WHEN SOBER? I can see it being popped on at 10 pm on a Thursday when you can’t be bothered watching something engaging so close to bedtime.

WORTH A WATCH WHEN HUNGOVER/ DRUNK? Fine for a little Sunday 5 pm hangover distraction while dinner is en route.

There is a particular kind of Netflix content about blandly over-privileged, attractive, educated people in their thirties and their bougie bullshit relationship dramas – if you could even call it drama – which I find profoundly boring, but am addicted to consuming. I’ve watched all of Friends From College, all of Easy, both of which have an unacceptably low success hit rate per episode. There are perhaps three of four enjoyable minutes for every 30. But I find myself unable to look away once I start, gobbling each new season in the weekend it’s released, darkly compelled by the Valencia-filtered lifestyles, the heavy oak desks, gargantuan goblets of Rioja, and expensively subtle hair highlights.

Anyway, You Me Her is absolutely the worst, most grating, least funny or thoughtful of them all, and season four came out this week. In case you’ve not come across it before, the basic concept is that a married couple, Jack and Emma (Greg Poehler and Rachel Blanchard) are in a rut, and Jack disrupts it by hiring an intelligent, beautiful escort, Izzy (Priscilla Faia). When Emma finds out, she tracks Izzy down to get an idea of what kind of hussy is attracting her husband, but then finds herself increasingly into Izzy too. The three then tentatively begin a polyamorous relationship with each other, with each season presenting new major challenges to their lifestyle choice and relationships with each other. This one sees Emma pregnant with twins and Izzy trying to feel ok with the nauseatingly pervasive stink of suburbia which surrounds the “throuple” now they’ve settled back down in Hawthorne Heights, where Jack and Emma lived originally when the whole mess began.

While it would not be impossible to make a good show out of the challenges and etiquette of being in an alternative relationship unit, it would need to be a hundred times less grotesquely upper-middle class than this show is. The characters are supposedly self-aware of their privilege, and the script occasionally makes fun of them for their foibles, but it isn’t enough. Each of the three – and all of their friends – are hateful, self-obsessed weirdos who talk like someone who saw Juno one too many times; all wordy zingers and pop culture references at times of high emotional stress. Izzy is treated like a mysterious pet by the older couple, but you can’t feel that sorry for her because she’s such a self-satisfied, conceited idiot herself. The three of them seem to do little but slouch about simpering at each other about how interesting and cool their choices are. A show which perceives itself to be charmingly outré and kooky, but which collapses constantly under the weight of its own smugness.

WORTH A WATCH WHEN SOBER? No, but if you’re anything like me you will anyway.

WORTH A WATCH WHEN HUNGOVER/ DRUNK? No. Possibly the least sexy sexy show of all time.

Linkedin
RELATED ARTICLES
OTHER ARTICLES
A new film from Berghaus traces the story of Adam Raja, who left behind a turbulent upbringing to discover the healing power of climbing.
Activists and campaigners are fighting back against new laws that would seriously undermine the ability to take industrial action, calling it an attack on fundamental workers' rights.
Filmmaker Laura Poitras discusses her new documentary which traces the remarkable life of the artist-activist and the impact of her battle against the US opioid crisis.
After fleeing the war in Ukraine, people are finding it impossible to secure affordable and decent housing in the UK.
A new law change is enabling Britain’s donor-conceived children to know the truth about their origins – but campaigners say the fertility industry must do more to protect people.
As she gears up for the release of her first book, the 24-year-old climate activist talks standing up to authority and building a more inclusive movement.