Art & Culture / Film / What Netflix did next: cucks & the Coen brothers 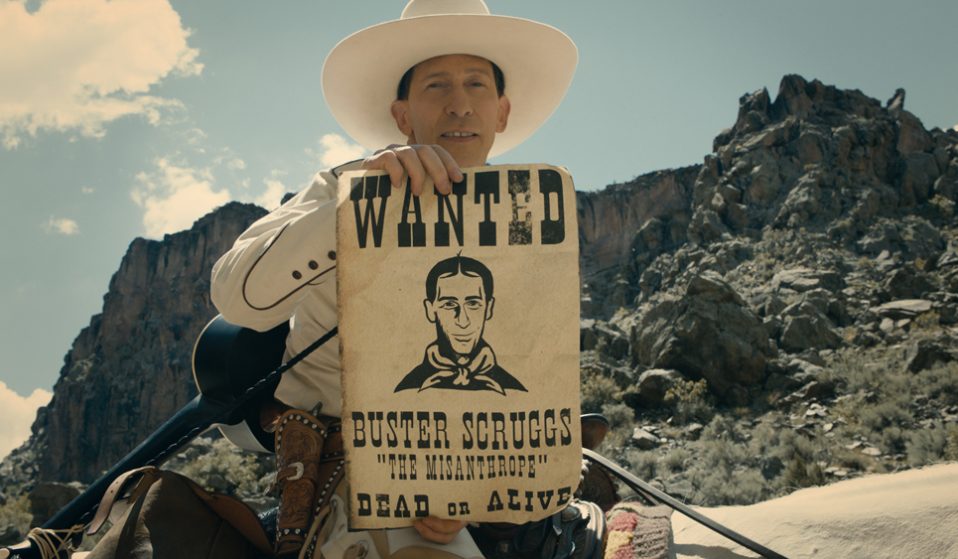 Writer Megan Nolan bravely ventures into Netflix’s Original releases, in an attempt to figure out if anything is even worth our time anymore. This week, it’s The Ballad of Buster Scruggs and – you guessed it – another David Spade film.

Writer Megan Nolan bravely ventures into Netflix’s Original releases, in an attempt to figure out if anything is even worth our time anymore. This week, it’s The Ballad of Buster Scruggs and – you guessed it – another David Spade film.

The Ballad of Buster Scruggs

I wanted to start writing this column not because I have special insights about cinema, but because I don’t. I had designs on being a critic once, when I was a tender-hearted Film Studies student, 18 and earnest as they come. This lasted about one term of university, at the end of which my lecturer reflected that an essay of mine about a film set in Iran about a doomed love affair read “like a woman’s magazine.” I dropped out not long afterwards.

She meant that I had spent all my time writing about the feelings, instead of the film. I didn’t look at cinema as a specific form with its own language. I perceived films solely as vehicles for communicating the emotions and stories therein. She was right, the lecturer, to point this out – though I can’t quite forgive her even now.

But although I dropped out, and never tried again to critique films in the same way I might a book or a piece of literature, the fact is I spend a substantial amount of my life watching them. On average I’d say I watch four or five a week, more if I’m going to the cinema, and that’s why I wanted to write this column. I want to write about the functions films fulfil in our lives, socially and emotionally; what use they are practically, which ones do what to us.

This week made me think that I tend to divide films into two categories of use; the first category is that of substantial and sustaining films, films I want to concentrate on, and feel things about and perhaps think about after I’ve finished watching. The second category is all those filler movies I stick on on a hungover Sunday or a boring Tuesday evening when I’m doing my skincare routine. They don’t need to be bad, necessarily, just forgettable and undemanding. They need to wash over me leaving no trace, just getting me from one hour to the next without making me think anything.

The new Coen brothers film, The Ballad of Buster Scruggs, is a funny conflation of these two categories. It’s a Coen brothers film, so I want to sit down with it properly and experience it, because their films are so good at making you want to do that. I can’t think of many films I’ve been more absorbed by than A Serious Man. Their lighter stuff like Burn After Reading is properly compelling too; I didn’t have my phone in my hand watching that, even though it’s sort of silly and cute (until it’s not).

Buster Scruggs, like their most recent previous Hail, Caesar, is an episodic film, made up of six stories from the Wild West. Some are funny, some are quite dull, a few are sad momentarily – but the insistent lightness of tone which dominates the film as a whole quickly undercuts those moments and leaves you wishing they’d let you get into it a bit more. It looks fabulous, and is eminently watchable even if – like me – you have no particular love for Westerns. A few magnificent performances elevate its occasionally grating glibness. Tom Waits as a determined old fella panning for gold and Zoe Kazan in a heart-rending turn as a plain and good-hearted woman tentatively finding companionship were my standouts.

It’s never going to be a chore to watch a Coen brothers film, but I’m looking forward to another I want to concentrate and chew on, instead of letting wash over me as this one did.

WORTH A WATCH WHEN HUNGOVER/ DRUNK? Drunk, sure – it looks great. I think it’s too bitty for a hangover, personally. You don’t really have the mental capacity to re-situate yourself every 15 minutes when in the throes do you.

And then there are films like this one: films definitively, defiantly designed to wash over you without leaving a trace. Adam Sandler’s melancholy and interminable mission to make as many films as humanly possible continues apace on Netflix, and here in The Do-Over, he is combined with our other dead-eyed icon of flaccid anti-hero comedy, David Spade.

Spade plays Charlie, a sad-sack bank manager being cucked to a spectacular degree by his trashy wife and abused by his boorish twin stepson oafs. When his old pal Max (Sandler), a cool FBI agent with enviable traits (he seems to have sex with women and, uh, has a gun I guess?) meets him at a school reunion and sees how pathetic his life is, he helps Charlie fake his death and start again. He’s gonna do it right this time – a pool, Hawaiian shirts, a woman with big tits who WILL sleep with him.

Capers ensue, until a jarring tonal swing in the final quarter, including an inexplicable subplot about finding a cure for cancer. It’s boring and stupid and not in a hysterical, absurd way like Spade’s Father Of The Year or Sandler’s good-bad best crap.

Sandler is known now to be a good actor, has been since Punch Drunk Love, was strangely affecting in Funny People, sad and compelling in Noah Baumbach Netflix movie The Meyerowitz Stories (New and Selected), so it’s all the ickier seeing him perpetually appearing in these rote mundanities.

Do you want to know something chilling about me? I realised about 45 minutes into watching this that I had seen it before. How’s that for a crushing “I’m wasting my life” blow.

WORTH A WATCH WHEN HUNGOVER/ DRUNK? NO.

Linkedin
RELATED ARTICLES
OTHER ARTICLES
Yesterday, rail workers came together to protest poor pay, working conditions and job cuts in their latest round of strikes.
With the Women’s Euros in full swing, last week saw glorious, sweaty celebrations take place in a dedicated, safe space for female and non-binary fans.
Students are being left to languish in unsafe housing, in some cases leading to serious health complications.
To mark the premiere of his new documentary on surfing giant Gerry Lopez, the filmmaker and former pro skateboarder sits down to share his unique brand of wisdom.
Ahead of the release of his new album, the producer reflects on his battle with drug use, getting into painting and what Madonna taught him.
A series of photos by the late Jerry Dantzic taken in 1957 show a tender side to the iconic Jazz musician.