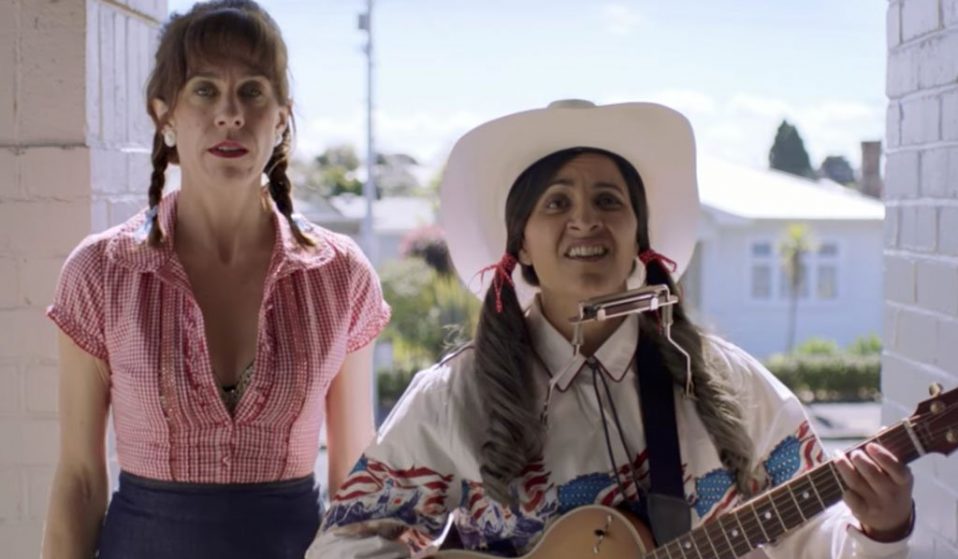 Writer Megan Nolan bravely ventures into the latest Netflix Original releases, in an attempt to figure out if anything is worth our time anymore. This week, it’s whip-smart New Zealand comedy The Breaker Upperers, and tone-deaf music doc The Two Killings of Sam Cooke.

Writer Megan Nolan bravely ventures into the latest Netflix Original releases, in an attempt to figure out if anything is worth our time anymore. This week, it’s whip-smart New Zealand comedy The Breaker Upperers, and tone-deaf music doc The Two Killings of Sam Cooke.

New Zealand – the less-racist, stoner nephew to Australia’s shouty sunburnt uncle – has a weirdly high output of brilliant comedians. Two of their big break-out stars appear briefly in this sweet, slender comedy – Jemaine Clement from Flight of The Concords and Edinburgh Fringe best comedy show award winner, Rose Matafeo, and are both a joy. But the real pleasure to be had from The Breaker Upperers is watching the emergence of relatively unknown and absolutely whip-smart young Maori talent.

The Breaker Upperers, written by its two leads Madeleine Sami and Jackie Van De Beek, is about two cynical friends, Mel (Sami) and Jen (Van De Beek), who run a break up service: if you’re too cowardly to shed that clingy partner once and for all, they’ll do it for you. They employ a pleasingly inventive variety of methods, from dressing up as cops and faking a crappy husband’s disappearance, to staging a scandalous pregnancy at the wedding of two gay men. The women became friends 15 years before, after it transpired that they had both been cheated on by the same man.

The film takes as its central concern what becomes of two people, specifically two women, who are bonded in failure or disappointment of some kind. It shares notable similarities with Paul Feig’s Bridesmaids in this regard, in which Kirsten Wiig’s Annie is visibly uncomfortable that her former buddy in wine binging and loneliness has found love and transcended their social class.

Here, Van De Beek (who resembles Kirsten Wiig in style and physicality, but is much sharper and a little sadder) is trying her best to convince herself she is resolutely a hard-hearted bad bitch, and can’t understand when Sami’s Mel begins to veer away from their shared misanthropy. There’s always something a little close to the bone in stories like this for me. It does feel like a terrifying betrayal when a close friend who has always been as alienated and messed up as you starts to get their act together. But of course, you can’t verbalise that without sounding totally self-involved (which you are) and like you are secretly rooting for them to fail so they can stay in the gutter with you (which, let’s face it, you are).

Mel meets 18-year-old Jordan (James Rolleston) who is looking to break up with his spectacular but frightening girlfriend Sepa (Ana Scotney) and begins a ludicrously inappropriate but passionate affair with him. Jen is horrified and unites with Sepa to tear them apart.

The film really comes into its own in the final third when Sepa gets more screen time. Ana Scotney is absolutely UNREAL as the terrifying but oddly lovable scorned girl, with a loyal, gender-ambiguous crew popping up behind her to parrot her exquisite foul-mouthed takedowns at every turn. I fear her, I want to be her, I want to be loved by her. If she’s not a star after The Breaker Upperers there’s something sorely wrong in this world.

The ending is fuzzy and cute without going the whole Bridesmaids hog of having all the women married off in order to achieve a happy conclusion. Perfect.

WORTH A WATCH WHEN HUNGOVER/ DRUNK? Yeah, stick it on for a cute Friday night in with wine and pizza.

The Two Killings of Sam Cooke

Part of the new Netflix music documentary series ReMastered, The Two Killings of Sam Cooke is a fascinating film about the soul legend’s life, but takes some dodgy moral turns when addressing his death.

For those of you who, like me, have hummed along to “Chain Gang” and “A Change Is Gonna Come” but never knew much about Cooke’s history and activism, it makes for a fascinating crash course.

What I found most striking was the extent to which his legacy was whitewashed, leaving him perceived in popular culture as little more than a smooth-voiced entertainer. In fact, Cooke spent much of his short life putting himself on the line for the rights of his less fortunate black peers. It’s starkly tragic that his death in 1964, shortly before his friend Malcolm X’s assassination, put an end to a burgeoning group of politicised black men from different areas of public life uniting in friendship to bring their message to a mainstream audience.

When Cooke died in a bizarre incident in a motel room in 1964, his friends and family called attention to the discrepancies in the official narrative and the lack of a full and proper murder investigation. The story went that Cooke had taken a woman back to a room, and that, fearing he was going to rape her, she jumped out of the window holding her clothes and his trousers, which contained a large sum of cash. An angry Cooke supposedly then went in a rage to the motel manager, an elderly woman, who, frightened, shot him to death. The killing was ruled “justifiable”.

Now, I’m more than happy to believe there is more to this story than was officially reported. Given what we know about the FBI targeting civil rights activists in the 60s, the violence and murder they were willing to commit, I would be in no way shocked if there was a conspiracy at play here. However, the film does no work to illustrate why we might believe this could be the case. Instead, it shows a selection of Cooke’s friends saying that he just wasn’t the kind of guy who would rape anyone, and besides, the woman turned out to be a “hooker”.

Pardon? It’s 2019 and we’re letting “He was a nice guy, I knew him, he would never have done that” air as a legitimate defence? And using the fact that the woman in question was a sex worker to delegitimise the possibility of rape?

For sure, I’m open to believing that nothing about Cooke’s death was as it was made to seem, that he intended no harm to the woman, that it was all a setup. But the film needs to show us some proof, or even substantial theories, which it doesn’t. Instead, we get to hear, yet again, “he got all the sex he wanted, he was a great guy, I knew him personally, he wouldn’t be capable of rape,” and I’m tired of hearing that to be honest, no matter what the context.

WORTH A WATCH WHEN SOBER? Yes, despite misgivings about the tone of discussion around the death (which is sort of set up as the film’s crux), the preceding context is really fascinating.

WORTH A WATCH WHEN HUNGOVER/ DRUNK? No.

Linkedin
RELATED ARTICLES
OTHER ARTICLES
On the fifth anniversary of the tower fire, around 18,000 joined the walk to remember the 72 dead and to demand justice.
The author discusses the all-consuming nature of heartbreak, and turning the experience into an incisive exploration of love and loss.
Over a dozen Stop Deportation activists locked themselves to each other outside a detention centre to prevent coaches taking those due to be on the Rwanda deportation flight from leaving.
For decades, an area of East London has served as a community hub for Vietnamese people looking for a taste of home.
In the latest instalment of Photographers in Conversation, the chronicler of raves, protests and beyond explains why he’s drawn to such specifically visceral environments.
Photographer David Hoffman recalls documenting the extreme wealth inequality around Tower Hamlets and Hackney int the 1980s.