Art & Culture / Film / What Netflix did next: Keanu Reeves & Dallas on speed 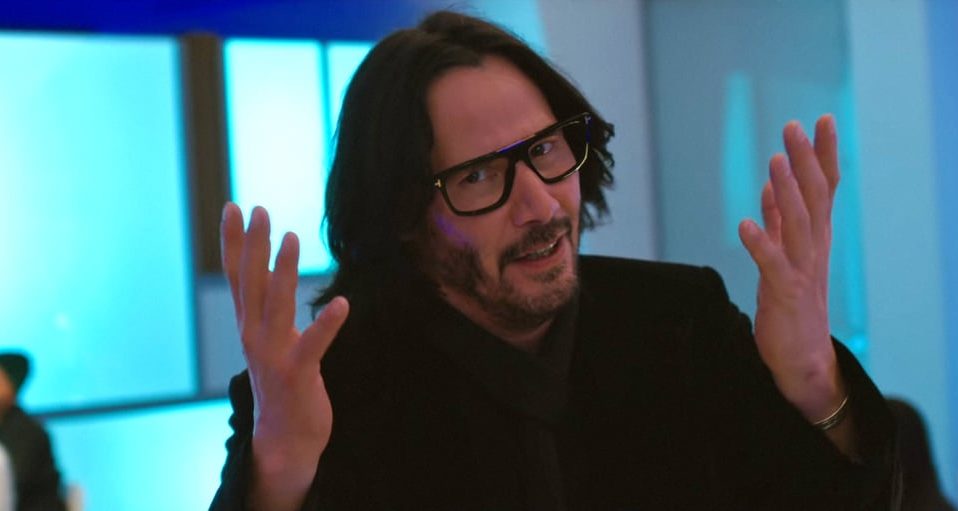 Photography © Netflix / Always Be My Maybe

Writer Megan Nolan bravely ventures into the latest Netflix Original releases, in an attempt to figure out if anything is even worth our time anymore. This week, it’s best-ever rom-com Always Be My Maybe and the farcical What/If.

Writer Megan Nolan bravely ventures into the latest Netflix Original releases, in an attempt to figure out if anything is even worth our time anymore. This week, it’s best-ever rom-com Always Be My Maybe and the farcical What/If.

Always Be My Maybe

I’m a sucker for love stories which start in childhood – the fairground teddy bear prize shyly presented, the ice cream, the parks, the swimming pools, all these sober neutered versions of dates. I probably love them so much because they are completely alien to me. I was a portly, surly little grinch of a child, always moodily listening to Velvet Underground cassettes behind a curtain of greasy hair to assure myself I was cooler than the idiots having fun together. Once a friend brought me along to a set-up, and the boy I was supposed to pair with thought I had been brought as a joke. I was more than safe from male attention until I was well into my teens, which is why I find childhood pashes so cute and heartwarming.

Always Be My Maybe has a great opening montage of the two leads, Sasha (Ali Wong) and Marcus (Randall Park) being best friends, kicking it in their San Francisco neighbourhood, eating amazing food made by Marcus’ saintly mother Judy. “Young Americans” by David Bowie plays as the two merrily skip down a hill in the twilight. It’s sweet and wholesome without being sickly, as is the rest of the film.

15 years after Sasha and Marcus lose their virginity to each other and then have a catastrophic falling out, Sasha is a celebrity chef and Marcus is still in San Fran installing air conditioning with his dad. Sasha is driven, controlled, and half of a power couple (the other half is Brandon Choi, played by Daniel Dae-Kim who looks like a Ken doll carved from marble). Marcus is happy performing with the same band he had back in high school, still driving the same car the fateful deflowering took place in. His girlfriend is a well-meaning but high-grade annoying hippie with voluminous dreads and not much going on behind the eyes. When Sasha opens a new restaurant back home, she and Marcus reconnect, but can their wildly different approaches to life ever really mesh?

I loved this film, maybe the most I’ve loved any Netflix original rom-com. I saved it up for a day I knew I’d be sad and it totally soothed the hell out of me. It’s another important milestone in representation for Asian-Americans on film, and it’s especially nice to see these great comic actors in a romantic film, where they effortlessly undo stereotypes.

There aren’t many surprises here, bar perhaps an unusually honest look at how difficult relationships can be even when you’ve met The One. But it’s a masterfully constructed bit of feel-good fun and it boasts a truly magnificent and blessedly lengthy cameo by Keanu Reeves which left me giddy and slack-jawed with pure enjoyment which is worth watching for in and of itself.

WORTH A WATCH WHEN SOBER? Yes! It’s a full on Wednesday night malaise shatterer!

WORTH A WATCH WHEN HUNGOVER/ DRUNK? Yes/Yes.

Renee Zellweger, who plays the central villain of What/ If, doesn’t so much chew the scenery as tear the entire set down, liquidise it, and drink it in her protein shake, the better to give her energy for a shag and a shady business deal after lunch. It is absolutely farcical acting, making Les Dennis as Widow Twankey look like nuanced Ken Loach-style realism by comparison.

And, yes, reader, you guessed it – I adore it. Whether you will enjoy the preposterous and intentionally stupid, bad, thick nonsense of What/ If really depends on whether you’ll feel the same. Will the sight of Renee literally licking her lips with languid pleasure as she executes another improbable high-stakes scheme annoy you? Or will it make you clap and exclaim with sheer happiness, as it did me?

What/ If is a 10-part series about Anne (Zellweger), a mysterious and ruthless venture capitalist with big money (a helicopter, a mountaintop chateau, a mysterious butler type confidante who follows her everywhere). Anne encounters the blandly hunky Sean (Blake Jenner) in a bar one night and, practically purring, offers he and his wide-eyed wife Lisa (Jane Levy) a lot of money in exchange for one night with him. Lisa is a scientist trying to get her wonder cure for terminally ill children off the ground – they can’t really say no, can they? It would practically be murdering kids.

Unsurprisingly, a night of shagging was never the only thing on the cards for mad old Anne and her bag of secrets and tricks, and she draws the couple ever further into her web of intrigue. This is the kind of show where everyone – I mean actually EVERYONE – has some sort of secret murder in their past, as well as a half dozen sexual intrigues. It’s like Dallas on speed, with a dash of Virginia Andrews mixed in.

You can keep your Sopranos, your Breaking Bads, your Deadwoods. There’s simply no way that a show in which Renee Zellweger does actual archery in her office to blow off steam while wearing couture is not quite simply the best television show in the world.

WORTH A WATCH WHEN SOBER? Yes, it’s the best television show in the world.

WORTH A WATCH WHEN HUNGOVER/ DRUNK? Yes, see above.

Linkedin
RELATED ARTICLES
OTHER ARTICLES
The hate Just Stop Oil faced after throwing soup over a Van Gough painting has been immense. Here, they explain why it won’t deter them.
With the singer’s tour in full swing, we sat down the musical production company who made the electrifying show possible.
A new photo series documents tribes preserving the environment through simple, sustainable practices in central Asia.
Planet Ardbeg is a 40-page sci-fi anthology created by three cutting-edge artists.
After a devastating fire, creatives in the city are coming together to call for more affordable workspaces.
After voting to strike across England, prison teachers explain why they’ve been pushed to a breaking point.