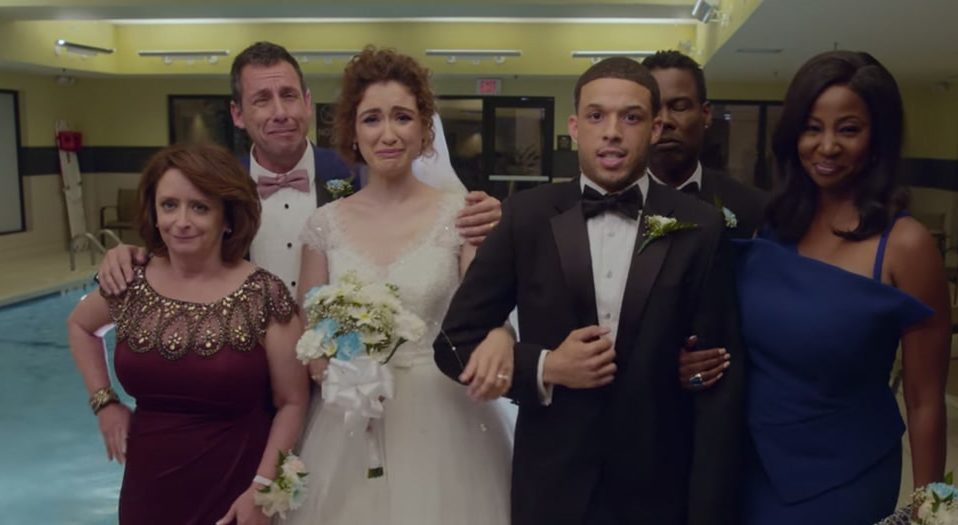 Photography © Netflix / The Week Of

Writer Megan Nolan bravely ventures into the latest Netflix releases, in an attempt to figure out if anything is even worth our time anymore. This week, it’s The Week Of (bad) and Swiped (arguably one of the most demented films ever made).

Writer Megan Nolan bravely ventures into the latest Netflix releases, in an attempt to figure out if anything is even worth our time anymore. This week, it’s The Week Of (bad) and Swiped (arguably one of the most demented films ever made).

I realised this week I’d been putting off watching this Adam Sandler release for over a year, the only of his Netflix oeuvre which has so far escaped my scrutiny. Simply glancing at the promo image for The Week Of, where Chris Rock is gurning with an expression of pure spiritual desperation, made me feel tired and depleted. It’s tough out here for a Sandler fan, and few of us have fully recovered from the offensively terrible (and just offensive) 2015 Western spoof The Ridiculous Six. I’d rather stick on prestige Sandler and pretend this doesn’t exist, but my moral duty to face the truth, no matter how ghastly, prevails. (Also there was nothing new out this week – next week however there is a rather rum little number called After, about a wholesome college girl falling in lust with a boy from the wrong side of the tracks with a British accent who has a Hidden Past, so we have that to look forward to.)

The Week Of is about two fathers, Kenny (Sandler) and Kirby (Rock) whose daughter and son respectively are getting married. Kenny is a lower-middle-class schlubby guy who can’t afford to lavish luxury upon his family, but insists on paying for the wedding out of misplaced hubris. Kirby is a smooth, swish surgeon who is loaded and shags lingerie models on glass coffee tables in hotel suites. When the week of the wedding arrives the collision of the two families creates would-be comic chaos, as do the embarrassing cost-cutting measures Kenny has taken for the wedding.

It’s a horribly unfunny film, though Sandler does alright with the material and is a convincing put-upon family man, a version of the character he has usually played in his later years. It’s Chris Rock who really puts the nail in this coffin, with a jaded affect and visible contempt for what he’s doing which makes it borderline insulting to watch. Inexplicably, Rachel Dratch the SNL legend and Steve Buscemi are also in it, driving home even harder what a miserable waste of talent the whole affair is. The comedic high point is when an old paraplegic man – whose physical abuse and discomfort is the film’s running joke – has his amputated legs mistaken for breasts and groped enthusiastically.

WORTH A WATCH WHEN HUNGOVER/ DRUNK? No. Stick on The Waterboy and dream of what might have been.

What a truly bizarre and unwatchable film this is. Presumably, it was scraped together off the cutting room floor to capitalise on Noah Centineo’s heart-throb success in To All The Boys I’ve Ever Loved last year, which perhaps explains its absurdly, comically uneven tone and wild leaps from plot to plot. It has a nasty habit of adding in its jaunty elevator music soundtrack at all times, as though to distract the viewer from the film they are trying to watch. I’m not even mad to be honest, just stunned.

It’s about a nerd, James (Kendall Ryan Sanders) who is supposed to be geeky-but-lovable but in fact comes off as a dangerous psychopath on the very knife-edge of social decorum. His equally repellent college dorm-mate Lance (Centineo) is a cruel womaniser who is failing a coding class and bribes James into creating an app for him which he can pass off as his own work. Happily, the app will also serve to enable the toxic dating culture which Lance and his friends thrive on. James develops the ultimate hook up app, Jungle, but when he discovers his divorced mother is using it becomes disturbed and takes down the server, and for some reason ends up living in a sorority house where he teaches the girls about self-worth (?).

Though this film is not fit to be watched and you shouldn’t try, I have some sort of affection for how genuinely demented it is. Several times the focus of a scene drifts off mystifyingly to James’ grandfather, played with manic brio by George Hamilton, literally mumbling non-sequential nonsense in a corner. Scenes and characters arrive out of nowhere and are never mentioned again or incorporated into the wider plot. The culminating moment of drama, where James has promised his new friends, the sorority girls, to develop their own dating app designed to empower women, ends with James announcing he hasn’t bothered to make it and shouting “YOU are the app!” and that nothing he could design on a computer could rival the divine design of God himself when he made women. It is properly MAD. It’s also the kind of film, clearly written by old people, where the mere mention of the word “app” is treated as the height of zeitgeisty humour, where saying “There’s an app for that!” is a delicious little bon mot to be savoured.

WORTH A WATCH WHEN HUNGOVER/ DRUNK? Maybe if you’re literally so drunk you can’t see and just need the sound of human voices in the room with you as you drift off into a troubled slumber.

Linkedin
RELATED ARTICLES
OTHER ARTICLES
A recent High Court ruling against the right to wild camp in Dartmoor National Park sparked the largest land protest in history – and campaigners say their fight is not over yet.
A new exhibitions brings together the work of photographers who documented the deep unrest of these pivotal decades.
At his West Bank restaurant, Fadi Kattan established himself as the voice of modern Palestinian cuisine. Now, he’s bringing his innovative, bold flavours to the UK’s capital.
Photographer Becky Tyrell went down to the fading banger and stock raceway to meet a community desperate to keep it alive.
A new film from Berghaus traces the story of Adam Raja, who left behind a turbulent upbringing to discover the healing power of climbing.
After blocking the Scottish government’s gender recognition reform bill, Westminster is now devising further changes to the law to make it harder for trans people to self-identify.