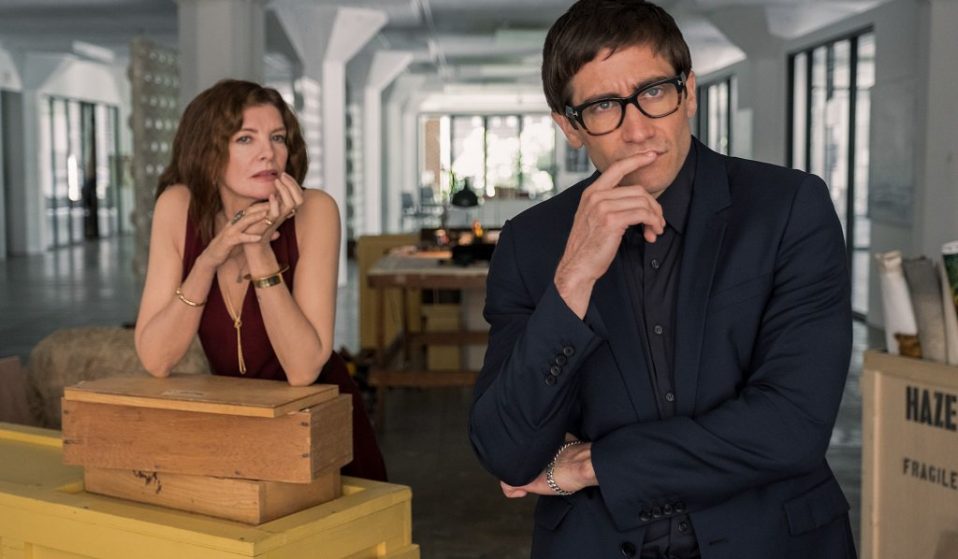 Writer Megan Nolan bravely ventures into the latest Netflix Original releases, in an attempt to figure out if anything is worth our time anymore. This week, it’s Mads Mikkelsen on the run (Polar) and Jake Gyllenhaal as a sassy bi art bitch (Velvet Buzzsaw).

Writer Megan Nolan bravely ventures into the latest Netflix Original releases, in an attempt to figure out if anything is worth our time anymore. This week, it’s Mads Mikkelsen on the run (Polar) and Jake Gyllenhaal as a sassy bi art bitch (Velvet Buzzsaw).

Oh, Velvet Buzzsaw, you had me at “spooky paintings which come to life and kill people in inventive ways,” but you had me double at “Jake Gyllenhaal as a sassy bisexual art bitch.” Yes, this new offering from Nightcrawler director and writer Dan Gilroy seems to have been devised in a laboratory specifically to please me, but it’s such good fun that everyone should see it.

Gyllenhaal plays Morf Vandewalt, an influential and casually ruthless art critic who swans around Basel Art Fair making and breaking careers. He isn’t exactly averse to the seduction of his social power, but he also takes the pursuit of artistic innovation genuinely seriously. This self-regarding seriousness means that this is one of the more delicious effete turns from the perpetually divine Jake G, star of my pained lustful daydreams since perfecting the art of sulking in Donnie Darko.

Rhodora Haze (Rene Russo) is a DIY-punk turned mega-successful corporate gallerist, while her aspiring receptionist Josephina (Zawe Ashton) is struggling to suppress hangovers and bad boyfriend-trauma well enough to get ahead. When her reclusive neighbour dies suddenly, Josephina finds his body and discovers that he has left behind a huge store of beguiling outsider art.

Despite explicit instructions to destroy it all, Josephina takes possession and sells him as the next big thing, setting off a terrible chain of events. It transpires that the artist, Vetril Dease, was a disturbed individual imprisoned in an asylum for decades after torturing his abusive father to death, and his artworks have retained the dark power which defined his life. The terrible allure of his paintings to the greedy and glib art world folk will eventually lead to their (outlandish, wickedly creative) deaths.

Though it’s not without gore, Velvet Buzzsaw is more dark comedy than truly frightening. More than one of the murder set-pieces feel more like Jumanji than a horror film – a bunch of chattering monkeys reach through a painting to strangle one victim, another suffocates in a flood of garish graffiti paint.

Nightcrawler’s essential nastiness is absent here, all the better to enjoy the comical affectations of the art world and the exceptionally fine performances at the film’s core. Rene Russo is steelily sexy and cool as the all-powerful Rhodora, and Zawe Ashton makes a particularly striking star-making turn as jittery, insecure, dislikable Josephina.

Jake Gyllenhaal veers from worldly condescension to dawning, terrified realisation; one of the funnier parts is to see his reflexive art-speak amp up even in the midst of his growing horror, revealing it as the inadequate shield it always was. At the funeral of a colleague, a second victim of the paintings’ dark power, he mutters: “And that coffin? What colour is that? Smog orange? Imagine spending eternity in that.”

The satirical barbs directed at the art world, though they mug along agreeably, feel a little easy and broad at times – things like a gallerist confusing some sacks of garbage for an installation were overkill, I thought. We get it, art is dumb and value an illusion!

Narratively, the film is tight and whips along quick as you like, but it is a bit weighed down by a large and under-utilised cast. Toni Collette as a cruel and vacuous buyer, Natalie Dyer as a put-upon assistant who keeps discovering bodies, John Malkovich as a washing-up artist, and Daveed Diggs as the hot new thing are pretty much all forgettable second thoughts. It’s Morf and Josephina’s show, really, and they, as much as the bleeding paintings and ghastly ironic death setpieces, make this a total camp joy to watch.

WORTH A WATCH WHEN SOBER? Yes!

WORTH A WATCH WHEN HUNGOVER/ DRUNK? Yes – not usually one to recommend a scary film for a hangover but it’s funny enough for any time IMO.

From one iteration of camp violence to another: here we have Mads Mikkelsen as retiring hitman legend, Duncan, AKA the Black Kaiser. The company he works for want him dead before he exits so they can avoid paying him the millions owed to him, and send five hot new-gen hitmen (Hitpeople? Hitfolk? Two of them are women) to take care of it.

They travel to his known addresses all around America, killing whoever they happen to find there in spectacularly overblown style. Eventually, they track Duncan down to his remote Montana cabin and kidnap Camille, the fragile neighbour to whom he has taken a liking (played by Vanessa Hudgens).

Polar has gotten execrable reviews almost across the board and I guess I can see why. It was made by a music video director, Jonas Åkerlund, and it looks like it (the opening sequence seemed to me like an uglier version of the “Bitch Better Have My Money” video). The gore, while so cartoonish that it bears almost no relation to the actual human body, is comically excessive. Accusations of being Tarantino without the social commentary are not off the mark.

But frankly, who wants Tarantino’s social commentary? If I want to watch a totally stupid, violent candy-fever-dream of a film – which, heck, sometimes I do – I would actually much rather be able to watch a silly shiny thing like this than have to pretend Quentin fucking Tarantino is capable of teaching me some nuanced lessons about the state of society.

Matt Lucas makes a delightfully preposterous turn as the eerily infant-like sadistic boss of the company, Vanessa Hudgens puts in a sensitive performance totally out of kilter with the rest of the ridiculousness, and Mads Mikkelsen frequently appears to have stumbled in from a different film and forgotten what he’s doing here.

WORTH A WATCH WHEN SOBER? Sort of yeah; a laugh, a horrible romp, a stupid caper. If you don’t like gore I would give it a miss.

WORTH A WATCH WHEN HUNGOVER/ DRUNK? Yes, when drunk – for me the gore would not be fun during a hangover.

Linkedin
RELATED ARTICLES
OTHER ARTICLES
Tough fines and arrests for drug possession and supply is pushing festival-goers towards unsafe measures to consume or smuggle in their substances.
Photographer Bud Glick recounts documenting everyday life in the area, and what it taught him about the Chinese immigrant experience.
Students are being left to languish in unsafe housing, in some cases leading to serious health complications.
A woman from Texas explains how she was forced to consider the criminal liability she might face for medication abortion over her health.
Protestors gathered outside Downing Street following the latest atrocities committed by Israel against Palestinians living in the besieged strip.
A new series of photos by Johny Pitts shines a light on communities and subcultures that have all too often been overlooked.