Art & Culture / Film / What Netflix did next: the desperate plight of the tall girl 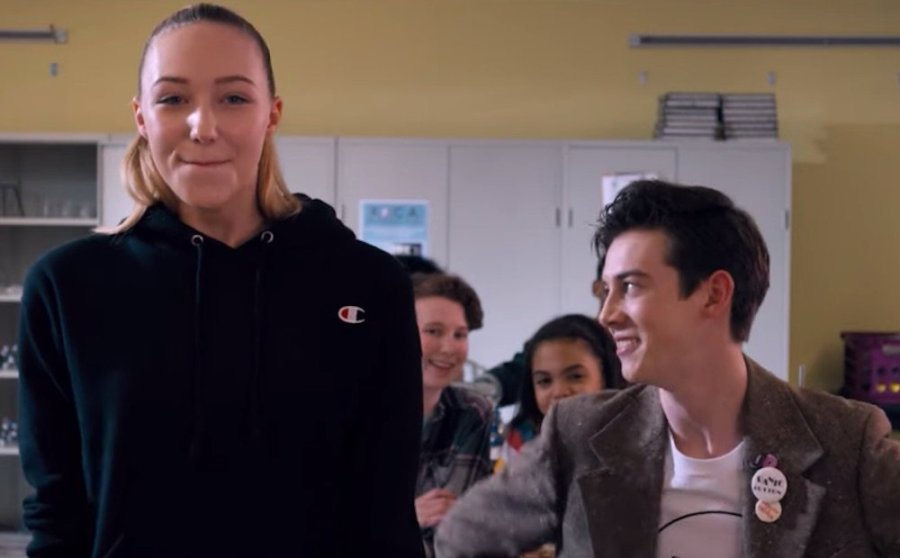 Writer Megan Nolan bravely ventures into Netflix’s new releases, in an attempt to figure out if anything is even worth our time anymore. This week, it’s two subpar romcoms: Tall Girl and Back To School.

Writer Megan Nolan bravely ventures into Netflix’s new releases, in an attempt to figure out if anything is even worth our time anymore. This week, it’s two subpar romcoms: Tall Girl and Back To School.

Tall Girl got a bit of a dressing down on Twitter for the relative unimportance of its subject matter – and, yes, being unusually tall is a much less traumatic teenage experience to be teased for than being, for example, a transgender person or a persecuted ethnic minority. And yet it seems to me rather unfair and a tad ridiculous to aim such criticism at a film like this, which aims not to sum up the American high school experience or to address genuine social exclusion, but simply to use some gimmicky lens through which to focus its generic high school rom-com.

Jodi (Ava Michelle) is a 6”1 teenage girl whose height is a source of (extremely mild) mockery. Her sister Harper (Sabrina Carpenter), meanwhile, is a normally-sized beauty pageant queen. Jodi’s best friend Dunkleman (Griffin Gluck), a hamfisted concoction of every teen movie kooky guy friend, has a long time unreciprocated crush on her. When Swedish exchange student Stig, played by the eye-wateringly beautiful Luke Eisner, comes to school, Jodi becomes embroiled in a love triangle which will ultimately teach her it’s okay to be different.

This is another sort of odd, choppy Netflix offering, which feels a little like three different films cut together. Mostly it’s a straightforwardly sappy Be Yourself drama, but then at times it jarringly includes scenes of zany comedy soundtracked by what sounds like a quirky xylophone and Yamaha sound effects keyboard. Jodi’s sister Harper, in particular – stomping around in a rage, counting calories in a corset and throwing darts at a poster of a rival’s face – feels as though she’s been dropped in from another, weirder film.

Though everyone involved is too rich to take seriously, all of it is more or less passable until the end, when (SPOILER) Jodi and Dunkleman end up together. More Revenge of the Nerds nonsense! They had no chemistry, she never fancied him, but they have to get together just because he’s nice to her and fancies her? Of course he fancies her: she’s a 6”1 blonde bombshell, like a generously proportioned Blake Lively. Everyone is gonna fancy her! Don’t settle for Dunkleman.

WORTH A WATCH WHEN HUNGOVER/ DRUNK? It’s just a tad too clunky for a hangover sadly – one of those so close but so far failures.

Popular culture became a nerd haven in the last two decades; decades in which I and millions of other teen girls lusted helplessly after Seth Cohen in The OC, and a working knowledge of the Marvel Universe became assumed of your average film-goer. The teen hero was no longer the brawny all American jock with the great smile and the vacant eyes, but the pale twitchy fellow who would be advising his tech investments in decades to come. Why, then, does the fantasy of nerds seeking vengeance still take such prominence? What else do nerds need, exactly, now that they enjoy both economic and cultural supremacy? Back To School is a dreary French comedy which does nothing to help me understand.

Jonathan (Jérôme Niel) and Pierre-Yves (Ludovic Day) were losers in middle school, taunted by a gang of cool kids; “Fatso” and “Bozo the clown” respectively. Lopez, the ringleader, dated Linda, Jonathan’s dream girl, a rejection which haunted him long after school ended. 20 years later Jonathan and Pierre-Yves live in Paris and have created a successful digital strategy company together. When they get wind of a school reunion back home, they decide to go and show off the wealth and good looks they have accumulated in adulthood.  Things get more convoluted when Jonathan is mistaken for his old bully Lopez by Linda and the old bully gang, allowing him to enact his rival’s status and try to shag Linda by making her think he’s someone else – lovely stuff!

The main problem here is that, sure, the bullies are assholes, but Jonathan and Pierre-Yves are also assholes, so that you don’t cheer for them to get their revenge but wish them further harm. The film is sort of aware of this, making light of their swaggering around bragging pointlessly about money to disinterested and bemused classmates who barely remember them. But ultimately none of it is funny enough to bother with, relying on crude humour which may be funnier in French than it is in English, but did not work for me in any case – though there was one bit about wanking off a dog to fill up a baby’s bottle which made me make some sort of shocked barking noise.

WORTH A WATCH WHEN SOBER? If you’re trying to brush up on your French you could do worse, but the French rom-com Netflix series The Hook Up Plan is genuinely really great so choose that instead.

WORTH A WATCH WHEN HUNGOVER/ DRUNK? Again, not quite. You can make a vapid film which is funny, or a moving film which isn’t, but you can’t make an unfunny film where the viewer doesn’t like any of the characters.

Linkedin
RELATED ARTICLES
OTHER ARTICLES
At his West Bank restaurant, Fadi Kattan established himself as the voice of modern Palestinian cuisine. Now, he’s bringing his innovative, bold flavours to the UK’s capital.
After blocking the Scottish government’s gender recognition reform bill, Westminster is now devising further changes to the law to make it harder for trans people to self-identify.
Theo McInnes’s photos of the annual event provide an intriguing snapshot of contemporary Britain.
Tristan O’Neill’s shots of dancers caught in moments of reverie at the height of rave’s golden age are a testament to the UK’s legendary club culture.
After building his reputation covering the US civil rights movement in the 1960s, the photographer went on to produce some of the most enduring images of the past century.
Social prescribing connects people with non-medical support to improve their health and wellbeing – but some experts worry it’s just a stick plaster solution.