Art & Culture / Film / The harsh reality of being a White Helmet, heroes of the Syrian civil war 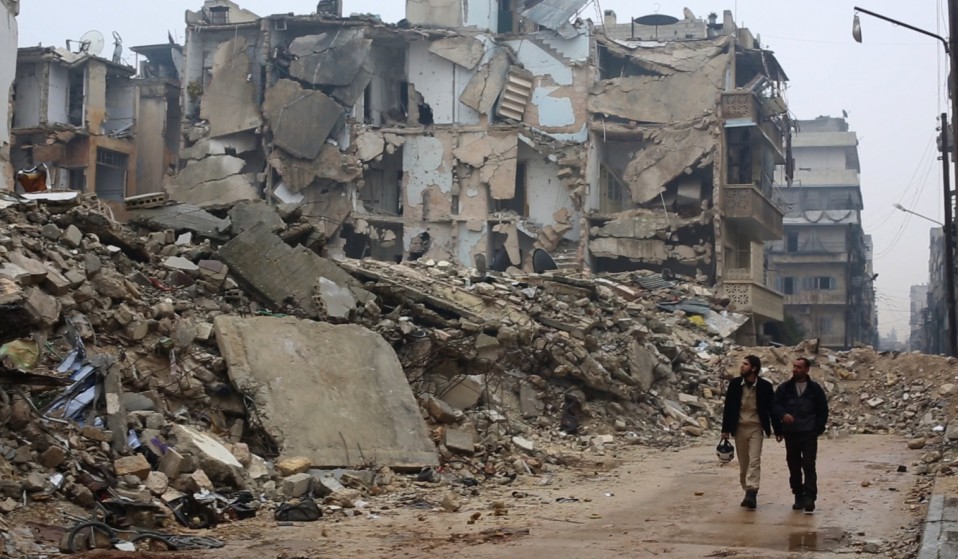 Director Orlando von Einsiedel’s documentary ‘The White Helmets’ pays tribute to the sacrifice and heroism of the volunteer rescue workers risking everything to save civilian lives in Syria.

Director Orlando von Einsiedel’s documentary ‘The White Helmets’ pays tribute to the sacrifice and heroism of the volunteer rescue workers risking everything to save civilian lives in Syria.

There’s a deafening silence over Aleppo. It’s punctuated only by the spinning rotor blades of a military helicopter hovering over the city, and the crackle of a radio warning of an imminent attack. As the helicopter drops its payload – a devastating barrel bomb – there’s a boom that shakes the building. A thick plume of smoke rises into the sky and a group of men watching from the balcony springs into action, jumping into vehicles and rushing to the site of the blast.

The men are members of the Syrian Civil Defence, or White Helmets, volunteer rescue workers, who until the Syrian Civil War began in 2011 were teachers, builders and office workers. In areas outside the control of the Assad regime, where there is no functioning state, they use their limited resources and training to support civilians in the aftermath of airstrikes, barrel bomb attacks and artillery strikes. Unarmed and politically neutral, they are beacons of hope in the violent hell that Syria has become, recognised for their work with a nomination for the 2016 Nobel Peace Prize.

The Syrian Civil Defence volunteers in Ansari, in rebel-held eastern Aleppo, are the focus of director Orlando von Einsiedel’s new documentary The White Helmets. It’s a gripping tale of courage, of people putting their lives on the line each day to save others, but also the huge burden placed on them by having to confront violence and destruction.

It follows his previous film, the Oscar-nominated Virunga, which highlighted the inspiring struggle by rangers at the Virunga National Park in war-torn Eastern Congo. The rangers were trying to protect the park, its endangered mountain gorillas and the stability of the entire region from rebel militias and illegal oil exploration. What connects both films, and much of Orlando’s previous work, is that it highlights the heroism and sacrifice of ordinary people who put their selfish needs aside for the greater good. 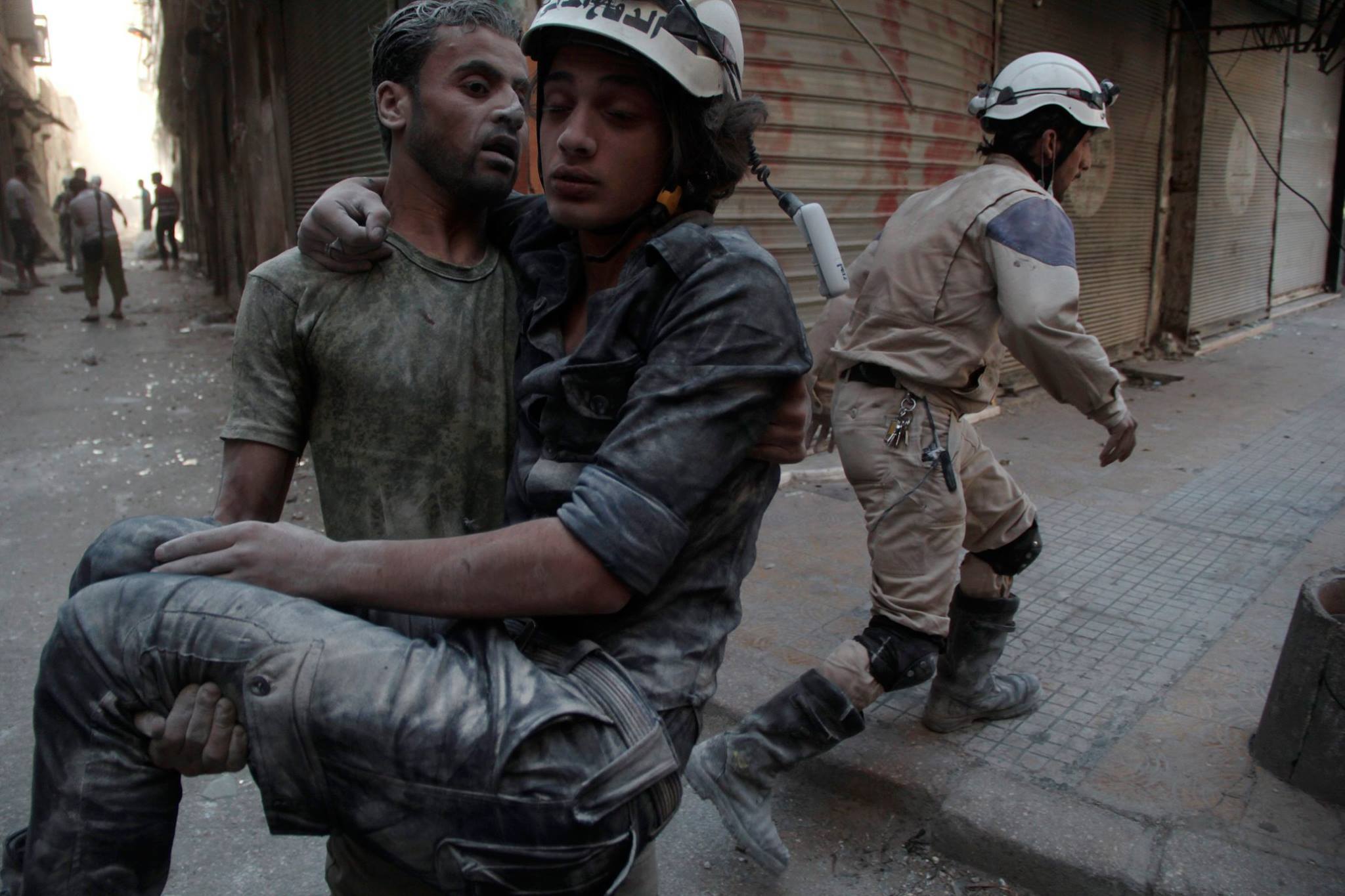 Photo from the Syria Campaign

“I’m drawn to these stories because there are so many things that happen in our world every day that are so depressing and upsetting, I find it’s very easy to lose faith in humanity,” Orlando explains. “But then you come across people like the rangers of Virunga National Park or people like the White Helmets.”

“Despite everything they’re going through, all of the difficulties of living in places of conflict, which often brings out the worst in people, they are exemplifying what I believe are the best traits that humans have: complete altruism, humbleness and sacrifice for something bigger than themselves.” 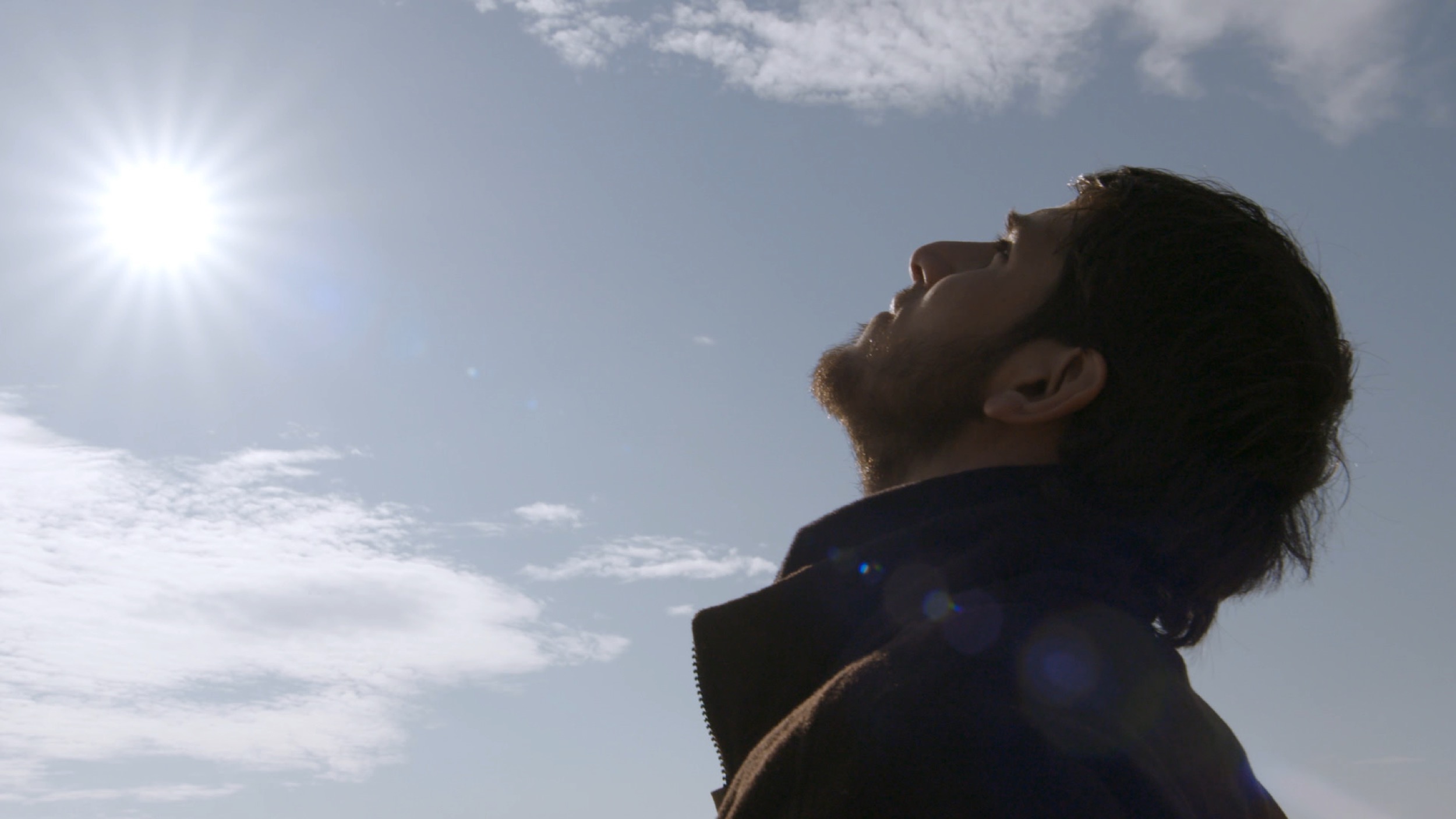 Orlando and his producer Joanna Natasegara realised the story of the White Helmets was one they had to tell after they saw remarkable footage of a one-week-old baby being rescued alive, having been trapped for 16 hours underneath piles of rubble.

“What had an equally powerful impact on us was who these rescuers were: a group of ordinary Syrian civilians who have volunteered to be part of a rescue service,” Orlando says. “They’re people just like me or you who go out every day and risk their lives to save complete strangers. Rather than picking up guns or fleeing the country, they have stayed to protect innocent victims of the conflict.”

The film follows the team from Ansari as they carry out rescues in Aleppo (shot by Syrian filmmaker and White Helmet Khaled Khateeb and his team), as well as completing a five-week course at an emergency workers’ training facility in southern Turkey. In Syria, they’re constantly pushed to breaking point as they struggle to cope with the Assad regime’s constant targeting of civilians and rescue workers. But even when they’re across the border, away from the ever-present threat of attack, the pressure is no less intense – and the strain all too visible. 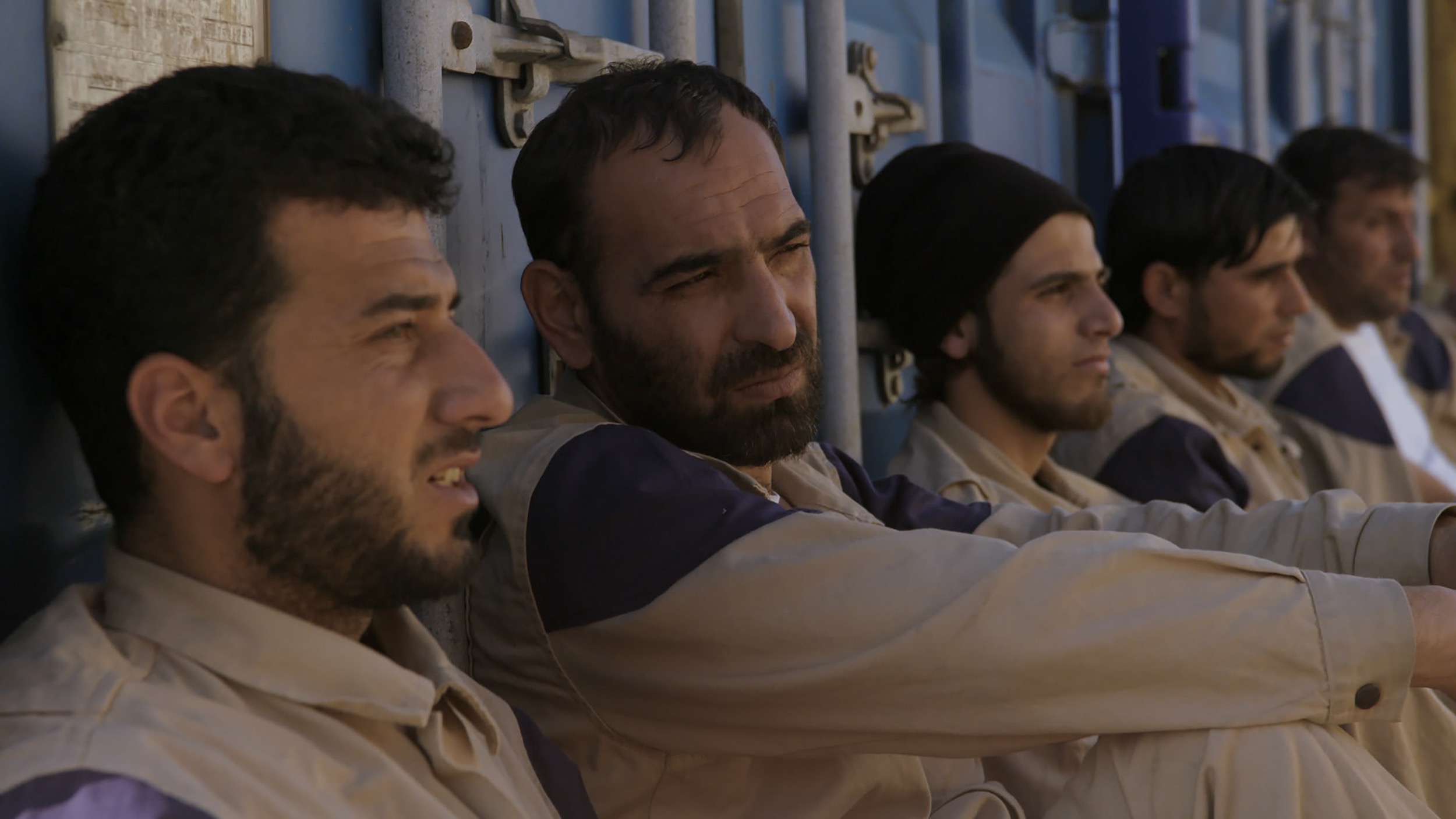 “In the footage from Syria, you see the immense physical violence they experience on a daily basis,” Orlando continues. “But we were all shocked by the psychological violence they experience as well. Every day when they finished training, their phones would begin to vibrate as the news of the day’s bombings came in. It was with unbearable frequency that there would be a message that one of their colleagues, friends or family members had been killed.”

Over 140 members of the White Helmets have been killed since hostilities began, but in the process they have saved more than 62,000 lives. They operate across the country in areas not under the control of the regime, but are unarmed, neutral and committed to saving any human life, regardless of which side they are on. 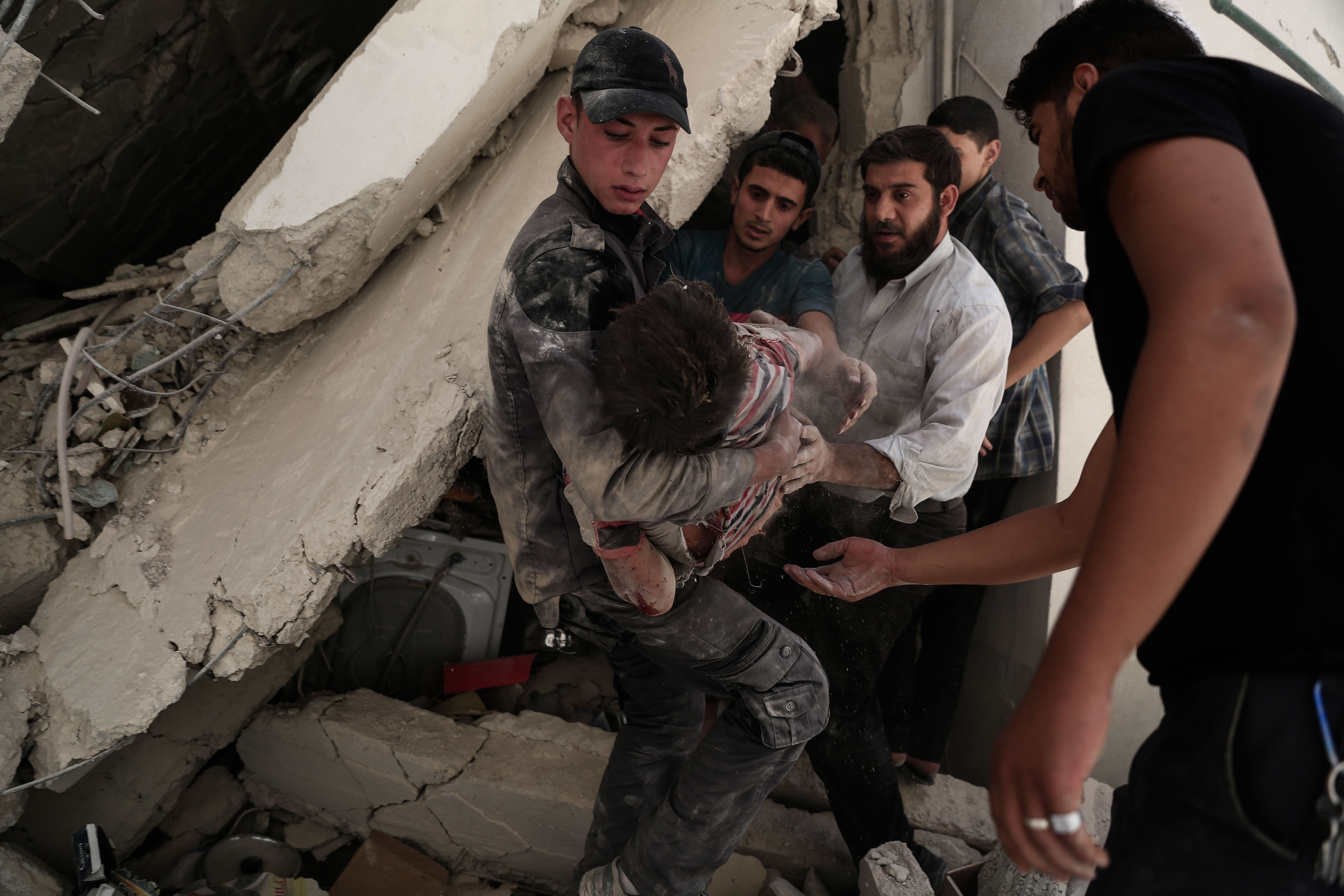 Orlando explains he made the film, in part because he believes the way we talk about Syria is too often dominated by either ISIS and terrorism or the refugee crisis – while the plight of civilians goes unrecognised. With a conflict that seems so intractable, there’s a risk that people outside switch off and feel powerless to do anything.

“What’s happening is so tragic, upsetting and seemingly endless that people find it hard to engage with,” Orlando suggests. “It’s easy to think there are no good guys left on the ground in Syria, but that’s completely untrue. The White Helmets are the epitome of bravery – a story of hope, of real life heroes, that cuts through the politics. Like hundreds of thousands of Syrians who see destruction and death every day, they still have hope. As long as they still have hope, we – the international community – can’t give up.”

Find out more about the The White Helmets and The Syria Campaign, who support their work.

Documentary The White Helmets is out now on Netflix.

Linkedin
RELATED ARTICLES
OTHER ARTICLES
Author Edward Banches dicusses his new book, which examines the hard rock and metal scenes in five African countries: Botswana, Togo, South Africa, Kenya and Ghana.
Filmmaker Laura Poitras discusses her new documentary which traces the remarkable life of the artist-activist and the impact of her battle against the US opioid crisis.
Activists and campaigners are fighting back against new laws that would seriously undermine the ability to take industrial action, calling it an attack on fundamental workers' rights.
A recent High Court ruling against the right to wild camp in Dartmoor National Park sparked the largest land protest in history – and campaigners say their fight is not over yet.
Following the release of his debut single, Deyaz talks battling addiction, dealing with his struggles through music, and building a budding music career from his living room.
Photographer Becky Tyrell went down to the fading banger and stock raceway to meet a community desperate to keep it alive.