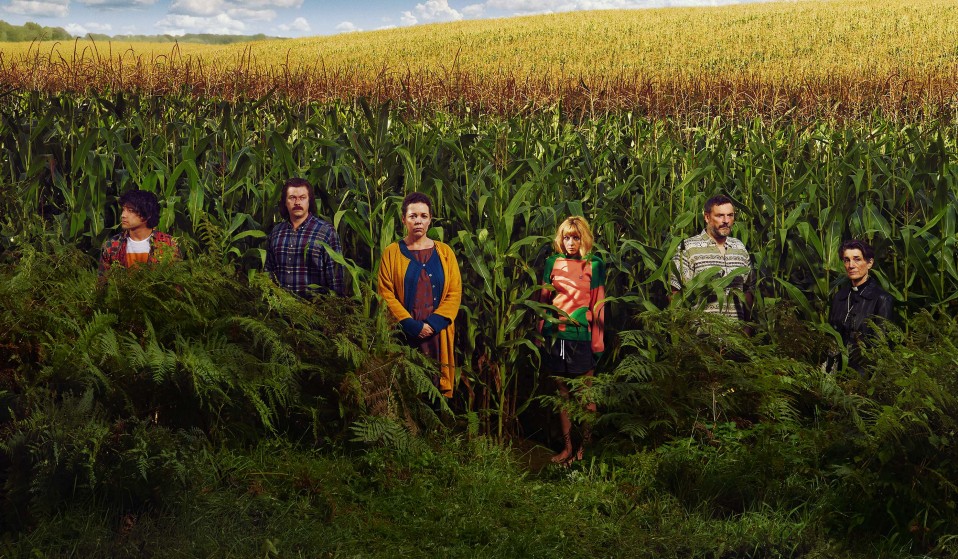 With the second season of Flowers almost here, we caught up with Will Sharpe – its writer, director and star – to discuss finding hope in life’s darker moments.

With the second season of Flowers almost here, we caught up with Will Sharpe – its writer, director and star – to discuss finding hope in life’s darker moments.

On a damp winter’s morning, children’s author Maurice Flowers leaves his cottage and wanders out into the garden. In his hand, he’s carrying a rope and an old wooden chair.

He arrives at a tree. After swinging the rope around one of its branches, he climbs onto the chair and ties a noose tight around a neck. Then he jumps.

For a moment, he hangs there, gargling, until the branch snaps and he falls flat onto the grass. “Fuck’s sake,” he mutters, picking himself up from the floor. In the distance, his elderly mother watches on silently from an upstairs window.

And so begins the first episode of Flowers, the acclaimed dark comedy from the mind of Will Sharpe. Starring Julian Barratt as Maurice and Olivia Colman as his erratic wife, Deborah, the show – which Sharpe writes, directs and performs in – won acclaim for its depiction of mental illness, grief and familial dysfunction.

Both heartbreaking and soberly funny (often at the same time), Flowers announced Sharpe as a bold, beguiling new talent in British television. While it’s been two years since the it first broadcast on Channel 4, Sharpe – perched at a table in a plush hotel bar, waiting for a strong black coffee – admits he never really left its world. With series two kicking off next week, we’ll soon all be joining.

“It’s a story that’s about subjects close to my heart, so I want to do those subjects justice,” he says. “I find it quite all-consuming… and I think that is probably a good thing.”

When you moved from Japan to the UK at the age of eight, you lived in Surrey. Was it a similar kind of setting to that of Flowers?
Yeah. Although, with Flowers, we think of it as a slightly nowhere time, nowhere place. It’s informed by fairytale, if you like. The area – the fictional area – is called Heathen’s Wood, which I suppose is our way of trying to connect it with pagan ideas and the forestry that surrounds them.

The location – the house, the woods – almost takes on the role of a character.
It is like casting a character – you need to cast the right house! It took us a while to find a house that reflected what was on the page. When people ask me where the idea came from, it’s quite a difficult question to answer. But, if I try to think about it, I think of the image of this house, in this slightly bleak nowhere place. That was one of the first things that I had.

You’ve said that because you moved here when you were eight, you wonder if you view Britain from the point of view of an “alien.” Do you think that it’s important that British audiences see these perspectives on their screens?
I think multiple perspectives on anything are normally a good thing. I didn’t really intend Flowers to be a comment on Britishness – whatever that is – but I think because it was set in a roughly British world, inevitably the way I see Britain bled sort of into it. But I think multiple perspectives on any subject is always a helpful thing. 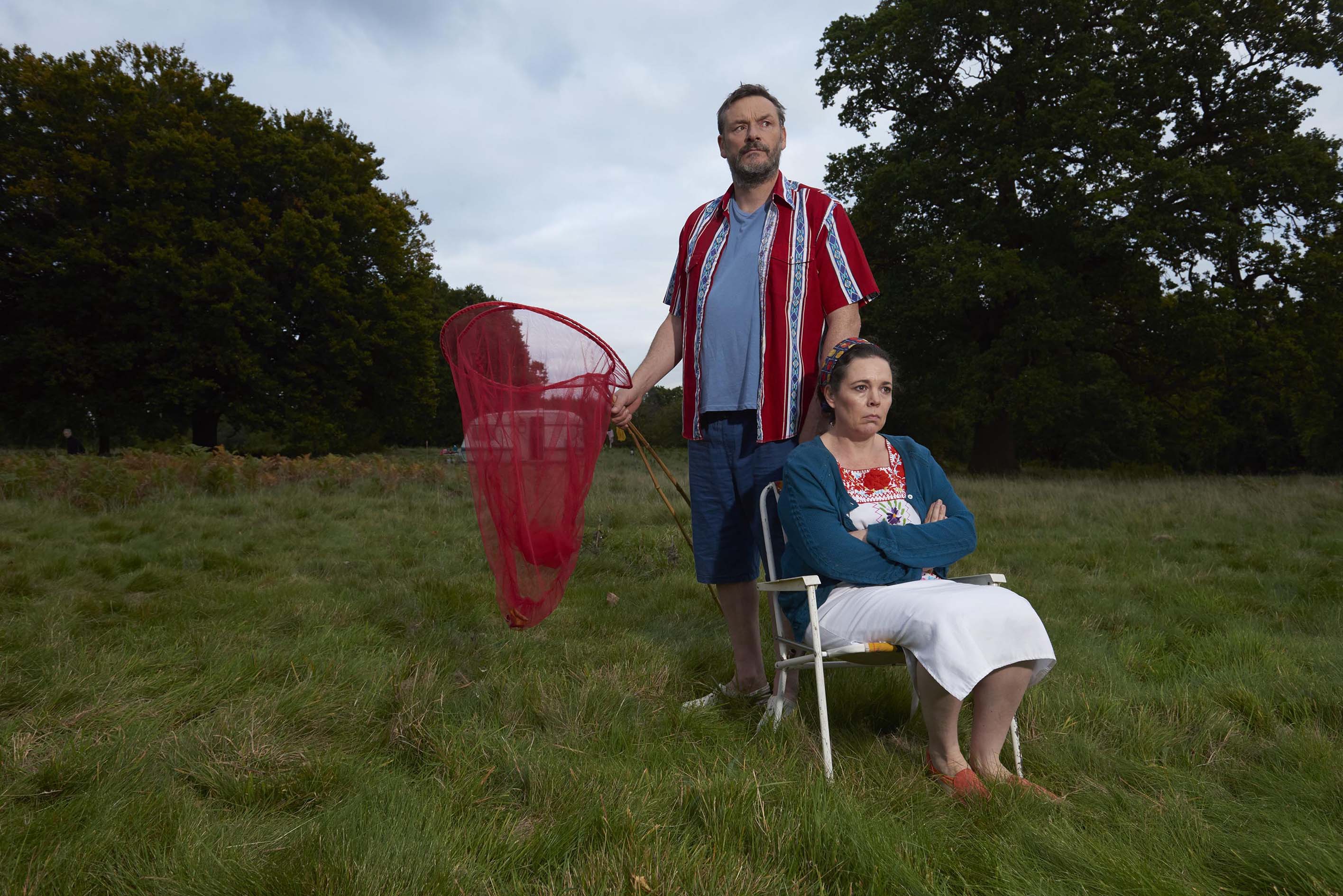 When you look at Flowers, Channel 4 probably took a bit of a risk.
I think I do agree with that, yeah. It was them who were courageous to commission it. They really allowed it to grow into itself. At the time when it came out – certainly in this country – comedies that went to more emotional territory were a slightly more unusual thing. That in itself was a conversation that I was really grateful they were open to; that if something difficult and sad was happening, then we should allow it to be sad.

I’m quite comfortable calling it a comedy-drama, even though that sometimes has connotations. If I had to choose between them, I would say it’s a comedy, because these are comedy characters first and foremost. They live in what I would describe as a comedy world. The fact that they sometimes are feeling a certain way doesn’t stop them from being comedy colours. I’ve often wondered if a helpful way of describing it is as a comedy with a mental illness.

Given the role that mental illness plays in the story, did you ever worry about taking on the responsibility of depicting it in such a way?
We all wanted to make sure that we were handling the subject as sensitively and responsibly – and helpfully – as possible. It was one of the things, as the story evolved, that we were extremely mindful of. That goes for the first and second series.

After the first, the show was recognised at the Mind Media Awards. That struck up a dialogue with them. So, for the second series, we sent them scripts, we sent them the finished episodes. I’m type 2 bipolar, so I’m writing from the heart and I feel like I know what I’m talking about, but it’s extremely reassuring. The people at Mind are extremely helpful and extremely nice, reassuring us about what we were doing right.

I guess the comedy helps provide some of the show’s more hopeful moments.
Yeah. Our primary goal is to tell a good story: to make people laugh and to make them feel something. But in the telling of it, I was really keen to make sure that we got that right. One of the rules that we had immediately that we should never, ever laugh at the characters’ mental state, or laugh at them having a difficult time. Comedy should come out of us engineering complex situations for them to handle, and the unfortunate positions that they find themselves in.

That continues into the second series.
The second series is everything I’ve ever felt. It’s all the things that I find difficult to understand about the world – all the things I can’t understand. At the very beginning, during the first treatment, I said, ‘I want this to be an uplifting comedy about melancholy… ’ There was another [part of that] sentence that said, ‘… and the rare moments of colour that make life worth living.’ I think when I first said that, I didn’t realise how much that’s what it would be about.

Maybe if I were to rewrite it, I would change the word colour to ‘peace’. I think, actually, that’s more valuable. You often feel good when you’re in a hypomanic state – but that doesn’t necessarily mean that it’s a safe place to be. You can have too much colour, I suppose is what I’m saying. Peace is more important.

Both series go to difficult places, but I think – for me – hope can transcend the most difficult and challenging thoughts that you might have. Whatever is most difficult and challenging about the world, hope can transcend that. I feel like hope doesn’t mean ignoring the stuff that’s bad. Particularly in the second series, I feel like I was confronting that stuff head-on in an attempt to work out what hope is. 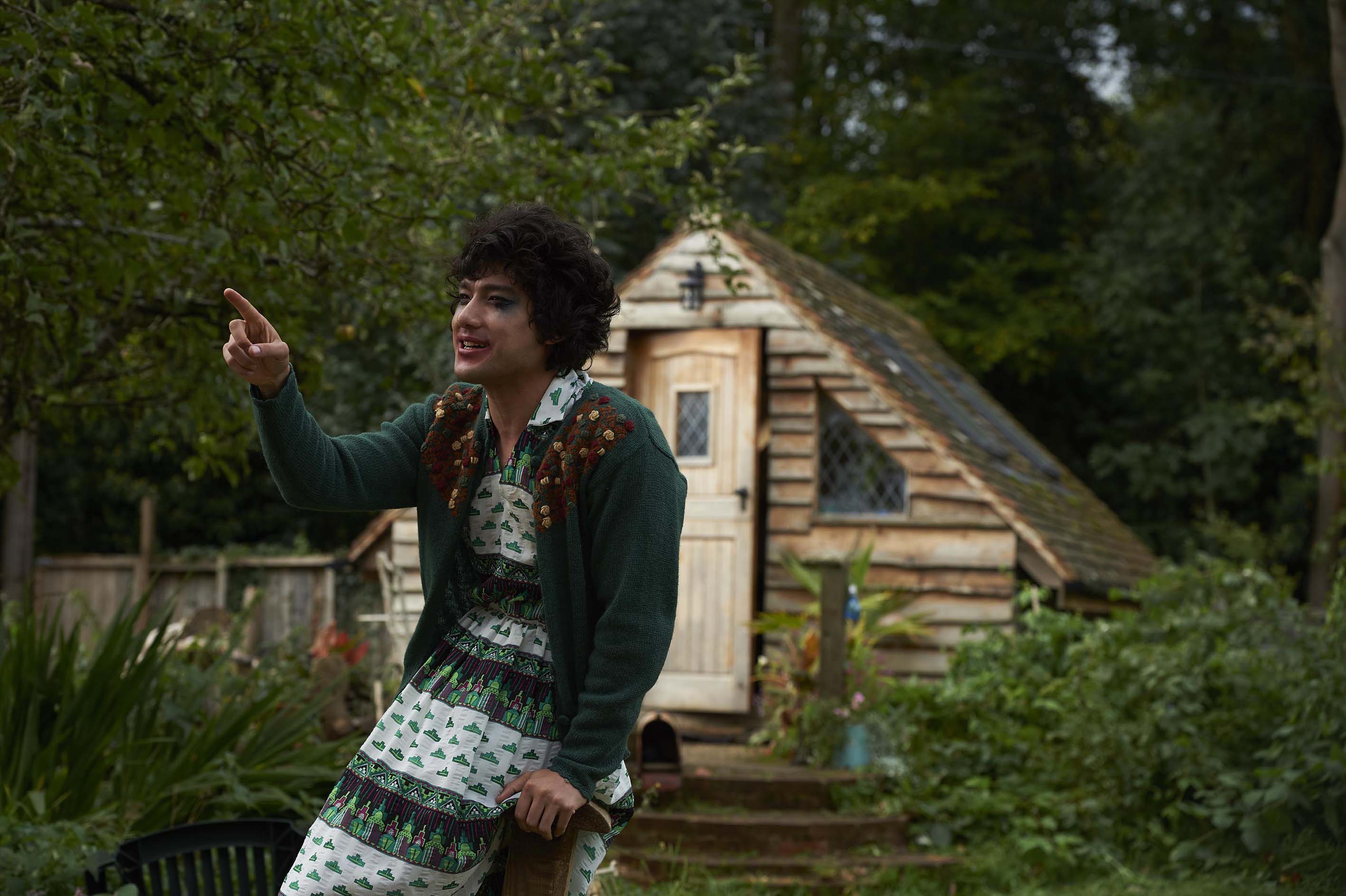 In that sense, is writing a cathartic experience?
It can be difficult. But I think it probably is cathartic. I definitely feel a better person for having made Flowers. I learn from the characters, and from the people that I’m making it with.

Did you always know you wanted to perform in it as Shun?
Pretty early, yeah. I wanted to inject some of the Japanese style of comedy that I grew up watching. I really felt like it was in my comedy bones. In the end, the easiest way to do that was to create this character Shun.

Shun’s journey is one of my favourite parts of Flowers’ first series.
I feel like I’m being led by the characters. Part of the game in playing Shun was a comment on that. I’ve noticed, from early gigs in pubs and stuff, that if I play a Japanese character people find it funny. It’s like, ‘which part are you finding funny?’

If I go to castings, I’ll often get asked if I can do martial arts. It’s really common to be called into play the guy at a computer, who’s good at maths, and is telling the hero, ‘be careful!’ Or, you’re the friend who’s got lots of spreadsheets on the go. All of the characters, I wanted them to be human beings. The things that connect Flowers to the real world are the feelings that the characters have – that is the bridge, basically. Shun’s no exception. I was led by him.

The second series of Flowers starts on Monday 11 June at 10pm on Channel 4.

Linkedin
RELATED ARTICLES
OTHER ARTICLES
In his 2008 series, the photographer pictured himself as Angela Davis, Martin Luther King Jr., Malcolm X, and other prominent figures.
Following the announcement of an 80% hike in the energy price cap from 1st October, crowds gathered outside the offices of energy regulator Ofgem to protest and declare their intention to undertake a payment strike.
Yesterday thousands gathered outside Buckingham Palace after news of the Queen’s death broke.
By turning a real-life crisis into daytime television fodder, TV bosses have once again shown themselves to be completely out of touch with audiences.
The idea that a younger generation is abandoning work has become a popular narrative online, but it doesn’t necessarily reflect reality.
Ahead of the release of their first collaborative album, the producer and rapper talk psychedelics and the state of UK hip hop.