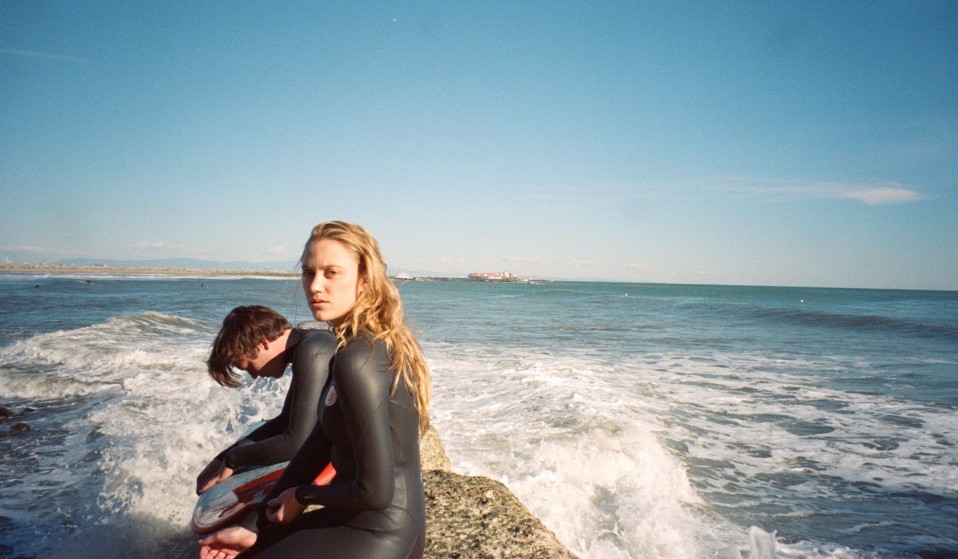 In The Tribes of Palos Verdes – the latest from Emmett and his brother Brendan – the ocean offers salvation in the face of trauma. For the sibling directors, such a depiction was always going to come naturally.

In The Tribes of Palos Verdes – the latest from Emmett and his brother Brendan – the ocean offers salvation in the face of trauma. For the sibling directors, such a depiction was always going to come naturally.

There’s a scene in The Tribes Of Palos Verdes where time stops for a moment.

During the crescendo of a verbal assault from her increasingly unstable mother, Medina (a teenage outcast, played in the film by Maika Monroe) escapes out of her home and down towards the beach it overlooks. Once she arrives, she heads straight for the water. She doesn’t swim, nor even really float per se: rather, she becomes one with the waves, transported from the chaos of her collapsing family as the ocean begins to surround her. At this point, everything else – the anger, the trouble, the upset – stands momentarily still. This is her safe space.

The film – told from Medina’s perspective and based on Joy Nicholson’s novel of the same name – chronicles the disintegration of a family unit upon their move to the titular beach community. As Medina’s father (Justin Kirk) leaves and her mother (a magnificent Jennifer Garner) struggles with her mental health, she and her twin brother Jim (Cody Fern) are left somewhere in the middle, forced to fend for themselves. While the latter soon finds himself spiralling into problems of his own, Medina instead finds salvation: she finds surfing.

Directed by brothers Emmett and Brendan Malloy, Tribes is a coming-of-age tale that exists firmly among the waves. Given their Los Angeles upbringing and surf doc credits (plus, frankly, their surname), the depiction of the ocean’s redemptive qualities is something that comes naturally to the self-taught siblings. Throughout the film, the camera lingers on swells, breaks and the prolonged glisten of the sun hitting the water, placing the natural beauty in stark contrast to the greed and artificiality of Palos Verdes itself. As Medina’s home and familial relationships crumble, surfing remains her guiding constant.

To celebrate the film’s release, Huck caught up with Emmett to discuss his relationship with Nicholson’s celebrated story, on-screen depictions of the surf community and striking a balance in the cross-section between Hollywood and the subcultural.

What makes Joy Nicholson’s novel such a seminal text within the surf community?
The drama around Lunada Bay seems to have always been headline material. I have seen so many articles about it over the years, so I know that is of interest to people. But, it’s Medina’s poetic voice captured by Joy that really makes the book powerful: that time period in Southern California beach communities was amazing. We grew up in it. Kids just got to do whatever they wanted and were living in some of the best surf towns before they were overrun.

Was it daunting, given that you had that respect for the book prior to becoming involved with the film?
It felt a bit daunting to make this story into a worthwhile film. The film had been trying to get made for about 20 years, so that always makes you feel like something must be wrong with it. I just felt Brendan and I were ready to make a good film. We had been really refining our filmmaking a lot over the past 10 years making commercials and documentaries, so we were excited to make a movie at some point. We just needed something we could relate to: Tribes fitted that.

As filmmakers, you occupy that cross-section between surfing and Hollywood. Is it difficult to find that balance – how do you ensure an authenticity to the subject matter?
I would say we have always existed in that cross-section. We began making surf films with our friends, so we value it and its tradition at the highest level. I do enjoy that we have been able to tell new stories and work in different spaces of filmmaking. This was a film about a family, that needed to feel honest and realistic. We felt confident we would get the surfing right, we were concerned about getting the emotions of the characters right. 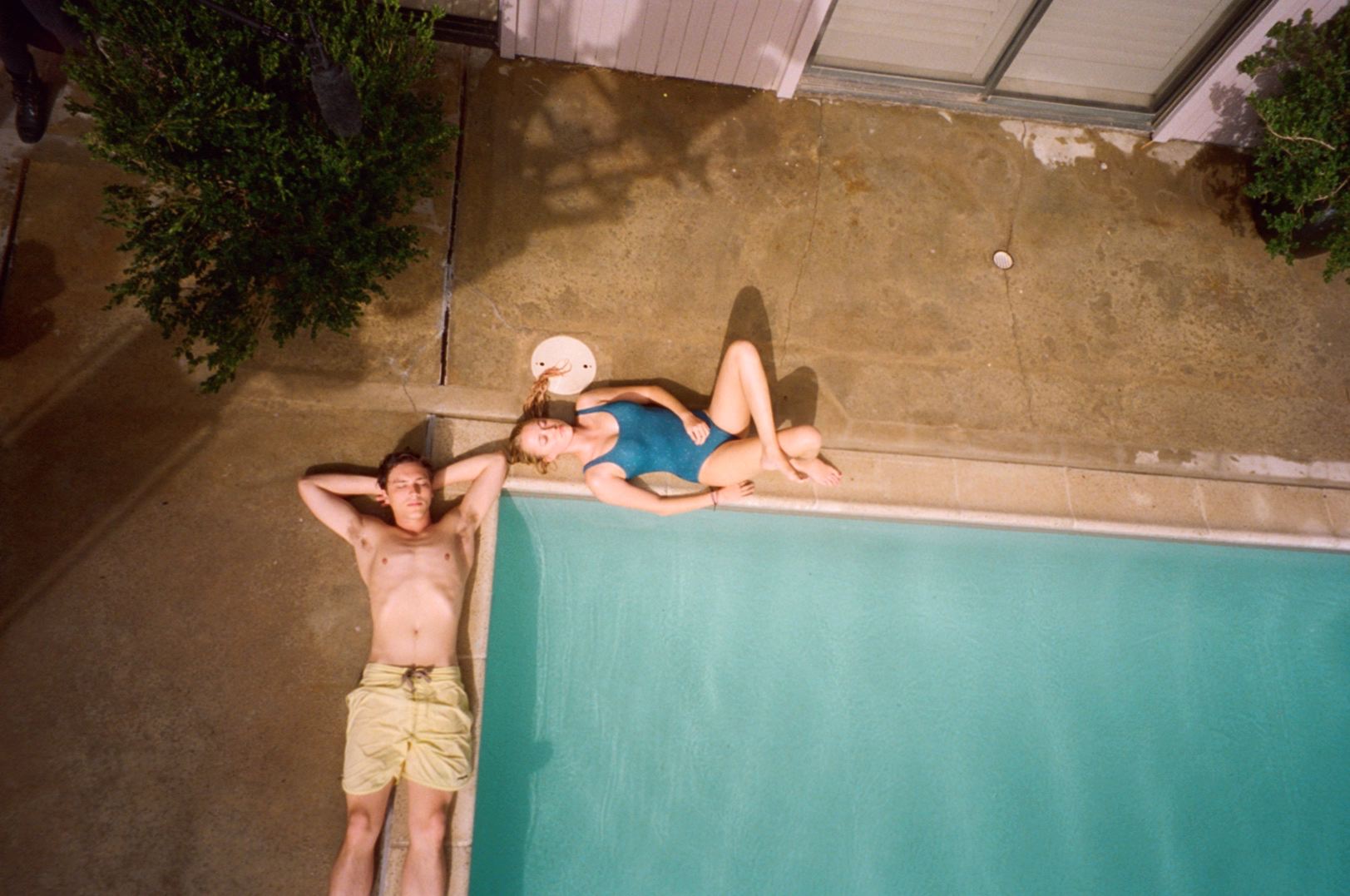 Maika Monroe’s performance carries much of the film on its shoulders – how familiar with her work were you?
Maika was attached to the film when we joined on. We watched It Follows and really were impressed by the film and her performance. We got to meet with her a few times and it always felt easy – she grew up a kite surfer in Santa Barbara, so that was a huge connection for us. Our hangs seemed very normal and we just talked a lot about the nuances of who Medina was. I showed her lots of photos and we talked about all her style references, even down to what sort of wetsuit and board she would have.

But, it was the first day of shooting that I got to experience her presence on camera. When she put her patented stripe shirts on and started to get into more vulnerable, emotional states of mind, the visuals of our movie started to come to life. She was incredible to shoot: we just knew that she had the power to carry the whole film.

Jennifer Garner, too, is incredible. How was it working with her?
Jennifer had worked with Robbie Brenner, the film’s producer, on Dallas Buyers Club, so Robbie knew she had the chops to pull this  off. We then had a few meetings with Jennifer and her friend Nicole, [who] was helping her with the role – we had amazing talks about the nuances of Sandy and it was clear that we all shared the same level of interest and focus on this film, and the details of the characters. But Jennifer got into this film in the most committed manner: she required no special celebrity treatment and just gave us a very raw and impressive performance. The range she gave us in her performances was crazy.

I read that while she was on-set, she would totally shut herself away in order to get into the mindset of her character.
Yeah, that is the truth. We would have a little moment saying ‘hello’ to each other in the morning while grabbing a coffee, but once we got into the house, the energy got pretty thick. Brendan and I would immediately jump into one of the rooms and start talking about the day of filming and where we all need the emotions to go. We are very positive people, so positivity is always at the centre of our shoots. But this one, there just had to be honesty towards the material. We had to be dead serious while filming and experiencing these scenes together. 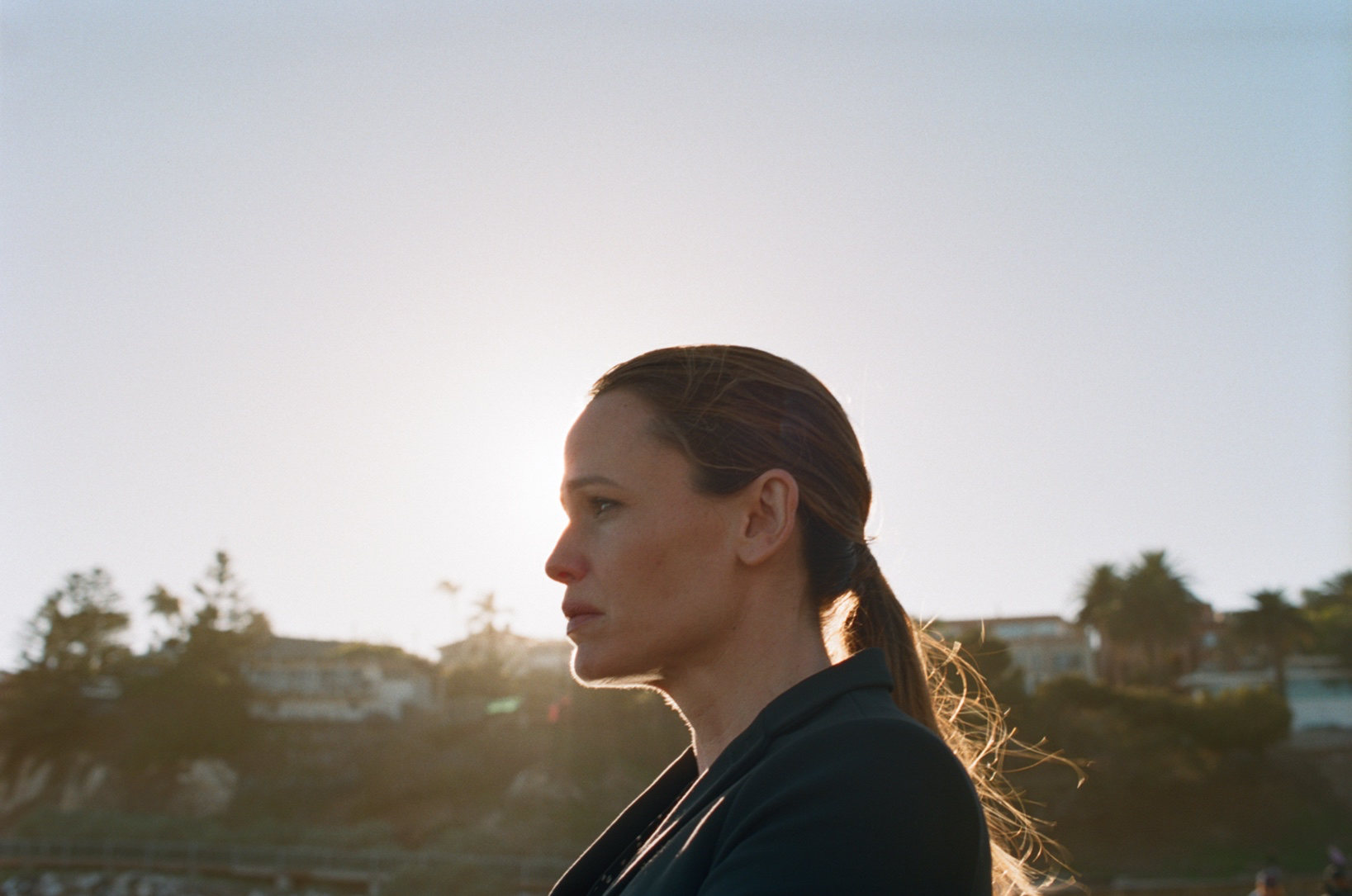 I found that there was a contrast between the idyllic escapism of surfing and the questionable character of some of the surfers depicted in Tribes. Was that something you were keen to play with?
Well, we are both surfers and grew up in a sort of famous surf family. All of us are respectful, nice people, so certainly that is what we know and relate to. We just sort of had to do more simple, classic storytelling with this film. The surfers had to be the ‘preps’, the  classic bad guys: they had to do the drugs, abuse their small-town fame and be spoiled brats in our storyline. We hope that in the end, the true spirit of being a surfer would come across and win in the end, via Medina. We got to show and brother and sister falling in love with surfing, and watch surfing save Medina’s life.

But can it really get like that? The territorialism, the beach patriarchy.
Well, when we started filming in and around PV, the Bay Boys were back in the headlines – many of them were getting served notices to appear in court for their territorialism. So there were cops on the bluff every time were would drive by and the Bay Boys clubhouse was at the point of getting torn out. I do feel that territorialism does still exist, but it probably isn’t what it used to be. I don’t see to much of it in the spots I like to surf.

What makes surfing the perfect escape for Medina’s character?
I think anyone who has truly gotten swept up in surfing knows how much it can change the sort of person you become – it’s a very vivid and emotional connection. I do think you can get that through skating in some regard, or anything you just get swept in. It’s something you draw in your notebook at school, daydreaming. We just wanted surfing to feeling like her escape and be something she can always find refuge in. That what surfing still is for me. 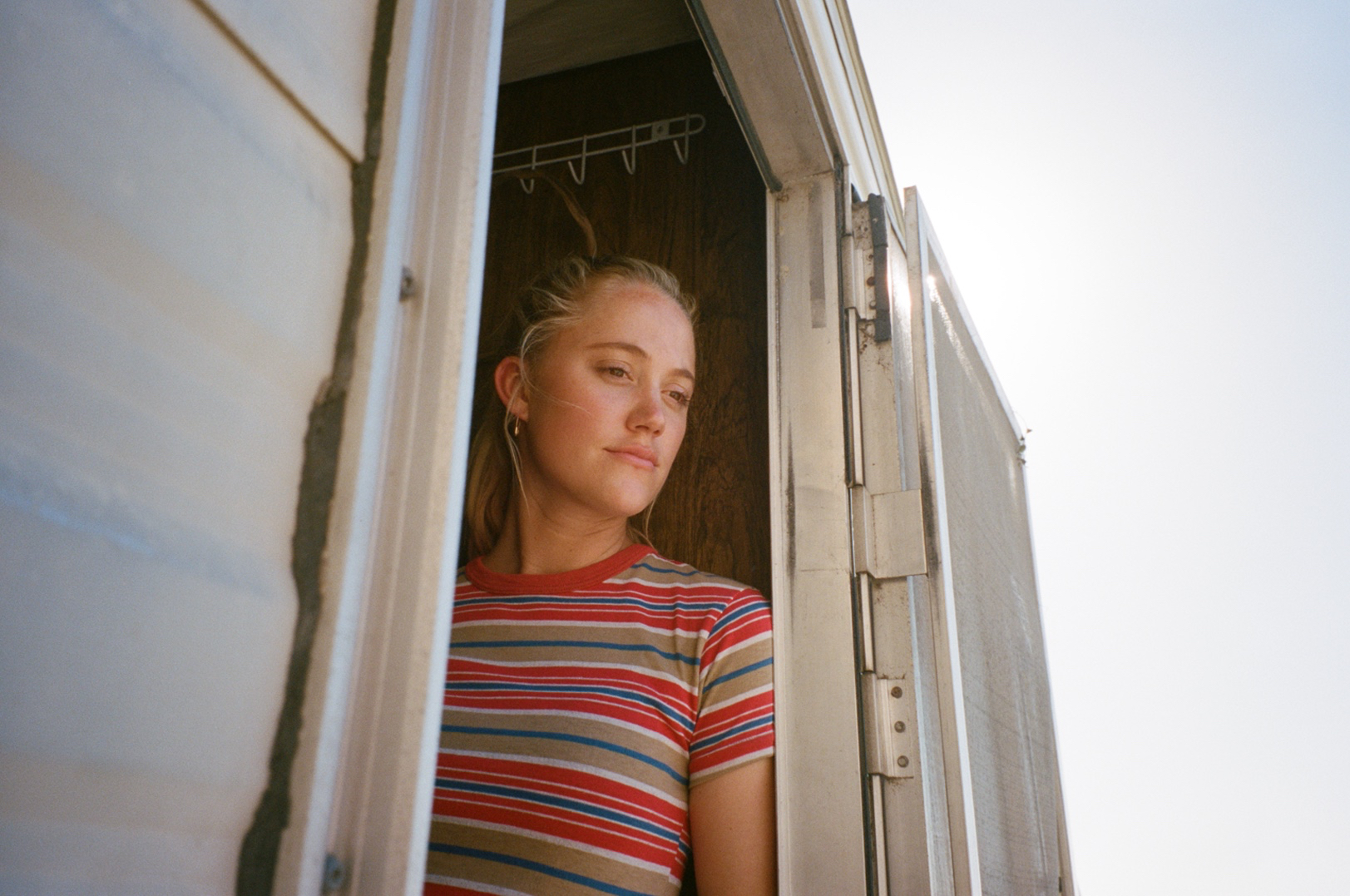 Linkedin
RELATED ARTICLES
OTHER ARTICLES
For over a decade, gamblers have won big by employing people to place live bets from the court. But does this dubious method still work?
The idea that a younger generation is abandoning work has become a popular narrative online, but it doesn’t necessarily reflect reality.
With skyrocketing rents, packed out viewings, bidding wars and more, renting in London has never been harder.
Birdy Chu reflects on documenting the historic moment in which the territory was formally passed back from the UK to China.
The workforce is now gearing up for industrial action after receiving a measly pay rise, reports Ella Glover.
Photographer David Corio’s archive offers a glimpse inside a revolutionary era of music and nightlife.