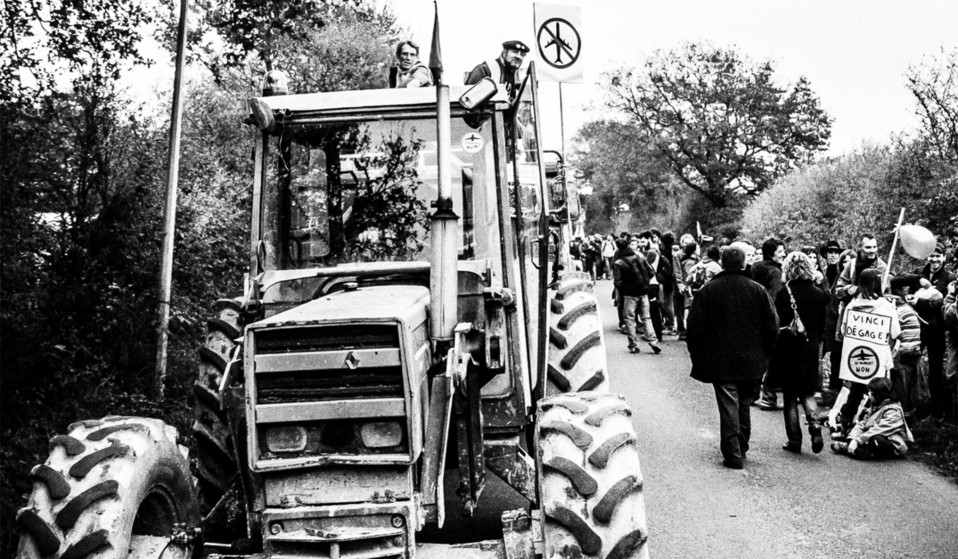 Ahead of a mass demonstration on February 27th, a 21st-century commune is sharing the story of its struggle against an international airport development.

Ahead of a mass demonstration on February 27th, a 21st-century commune is sharing the story of its struggle against an international airport development.

La ZAD (Zone A Défendre) is Europe’s largest postcapitalist land occupation, a rural protest camp on the outskirts of Brittany in Notre-Dame-des-Landes.

Ever since 2009, this 4,000-acre space comprised of farms, woodland and abandoned properties has been inhabited by environmentalists opposing the construction of an international airport. The project is a long-term development that threatens to turn the surrounding countryside into a sprawling metropolis.

Authorities have repeatedly tried to evict the protesters and clear the land only for the ‘ZADists’ to remain steadfast in their presence, using permaculture strategies to harness the land while turning makeshift structures into a thriving community – one with its own theatre spaces, bakery, bike workshops and even a pirate radio station.

As plans for the airport development seemed to drift into a state of hiatus, the ZAD commune only grew stronger, taking root as a home for activists and a place of social experimentation. In doing so, it has become a symbol of resistance to various infrastructural projects across France – dubbed by politicians as “a lawless territory lost to the republic”.

At the end of 2015, French Prime Minister Manuel Valls called for the airport development to resume. However, in January, ecology minister Ségolène Royal said that there would no forceful evictions at Notre-Dame-des-Landes for fear of a civil war breaking out.

Amid this renewed atmosphere of uncertainty, inhabitants of the ZAD (along with others who support their cause) have published a digital booklet in English – part historical chronology, part manifesto – to give voice to its struggle. Ahead of a mass demonstration on February 27th, the publication aims to help the story of the ZAD find wider public awareness and counteract unfavourable depictions of the movement among the French media.

“We call for the spirit of the zad to continue to spread, taking a unique path every time, but with the desire to open cracks everywhere,” it reads. “Cracks in the frenzy of security measures, cracks in the ecological disaster, cracks in the tightening border regimes, cracks in the omnipotent surveillance, cracks in a world that puts everything up for sale. In these disenchanted times, the zad and all that it represents, like the struggles of yesteryear and elsewhere, is a glimmer of hope in the here and now.”

To find out more, check out Defending the ZAD, a new little e-book on the struggle against an airport and its world.

Linkedin
RELATED ARTICLES
OTHER ARTICLES
With the UK now set to run out of vaccines, people working in the sex industry – particularly outside of major cities – have been left especially vulnerable, reports Brit Dawson.
To mark the premiere of his new documentary on surfing giant Gerry Lopez, the filmmaker and former pro skateboarder sits down to share his unique brand of wisdom.
Photographer Bud Glick recounts documenting everyday life in the area, and what it taught him about the Chinese immigrant experience.
The author discusses her new memoir, which offers a sobering reflection on the racism and otherness she’s experienced along with a joyful celebration of her culinary heritage.
Students are being left to languish in unsafe housing, in some cases leading to serious health complications.
From the chip shops, to the bingo parlors and burlesque dancers, photographer Mike Coles remembers capturing scenes of holidaymakers by the English coast.