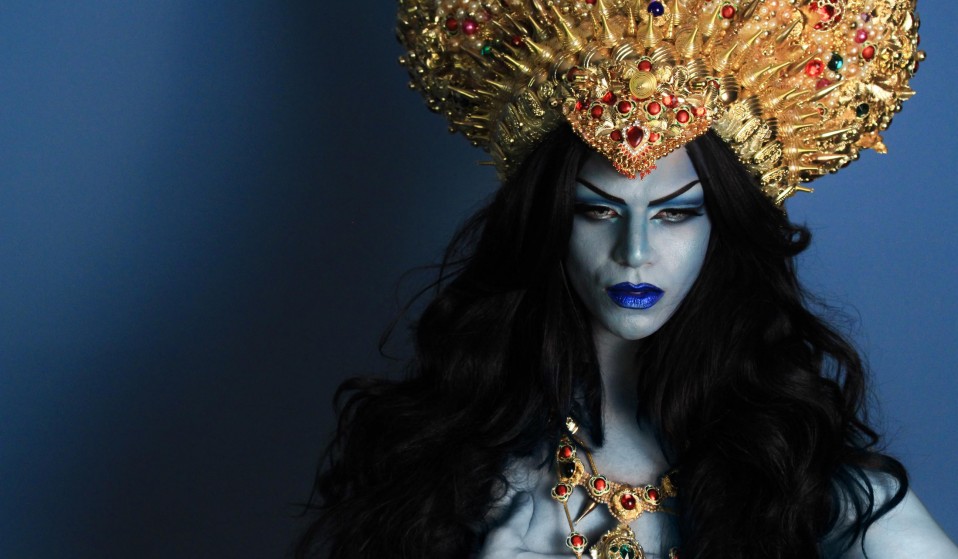 Online superstar Arabia Felix uses the artistry of drag to inspire thousands around the world.

Arabia Felix first donned make-up aged ten in his bedroom, playing alone as children often do. Today, aged twenty-three, hundreds of thousands take joy in his artistry, through videos on YouTube and tutorials on drag enjoyed by adoring fans around the globe. An online community may revere him, but at home in Kuwait, this life remains a closely guarded secret. Kuwaiti legislation punishes "imitating the appearance of a member of the opposite sex" with imprisonment or fines. His art, drag alter ego, and sexuality are all outlawed, and yet Arabia remains defiant. His make-up may embody traditional Arabian beauty, but it’s also his armour - and he’s preparing to fight.

“I have no problem with my sexuality, although I’ve never felt the need to come out the closet to my family. Sometimes I even limit how long I hang out with them, because the more I’m with them, the more I want to tell them about who I am, and to show them my work. The deep-rooted links between drag and queerness only became known to me later. To this day my parents have no clue.

“There were two famous actors in Kuwait during the ’80s and ’90s. Their drag was unattractive, unpolished and unfeminine, which is different from what I do. But they were popular; people loved them when they appeared on TV.

“Someone like me can see that they may well have been in the closet, but they’d go out their way to say that LGBT people in Kuwait deserve what happens to them. They’d throw their own kind under the bus just to take the spotlight away.

“For me, drag is an art, a form that is inherently about gender, sexuality and freedom. I want to show both men and women can wear make-up, that whatever gender you are, art and self-expression should be cherished. Dressing up as a woman, and putting on make-up doesn’t make you gay.

“To do what I love, where I am, I have to be political; it comes with the territory. Drag might now be an accepted art form in the west, but here it makes me an activist. Challenging ideas of masculinity and sexuality, and standing up for LGBT people in my country, is far from the norm.

“What scares me the most is not the people who’ll threaten and want to hurt me, but how my own community might respond. And then there’s my friends and family; our association could put them in danger.

“Last week I was doing a photoshoot with my best friend and I had painted my entire body red. I was dropping him home that night, and we got pulled over by the cops. The officer saw red paint on my nails, and immediately pulled us out the car; looking for make-up, wigs, anything. 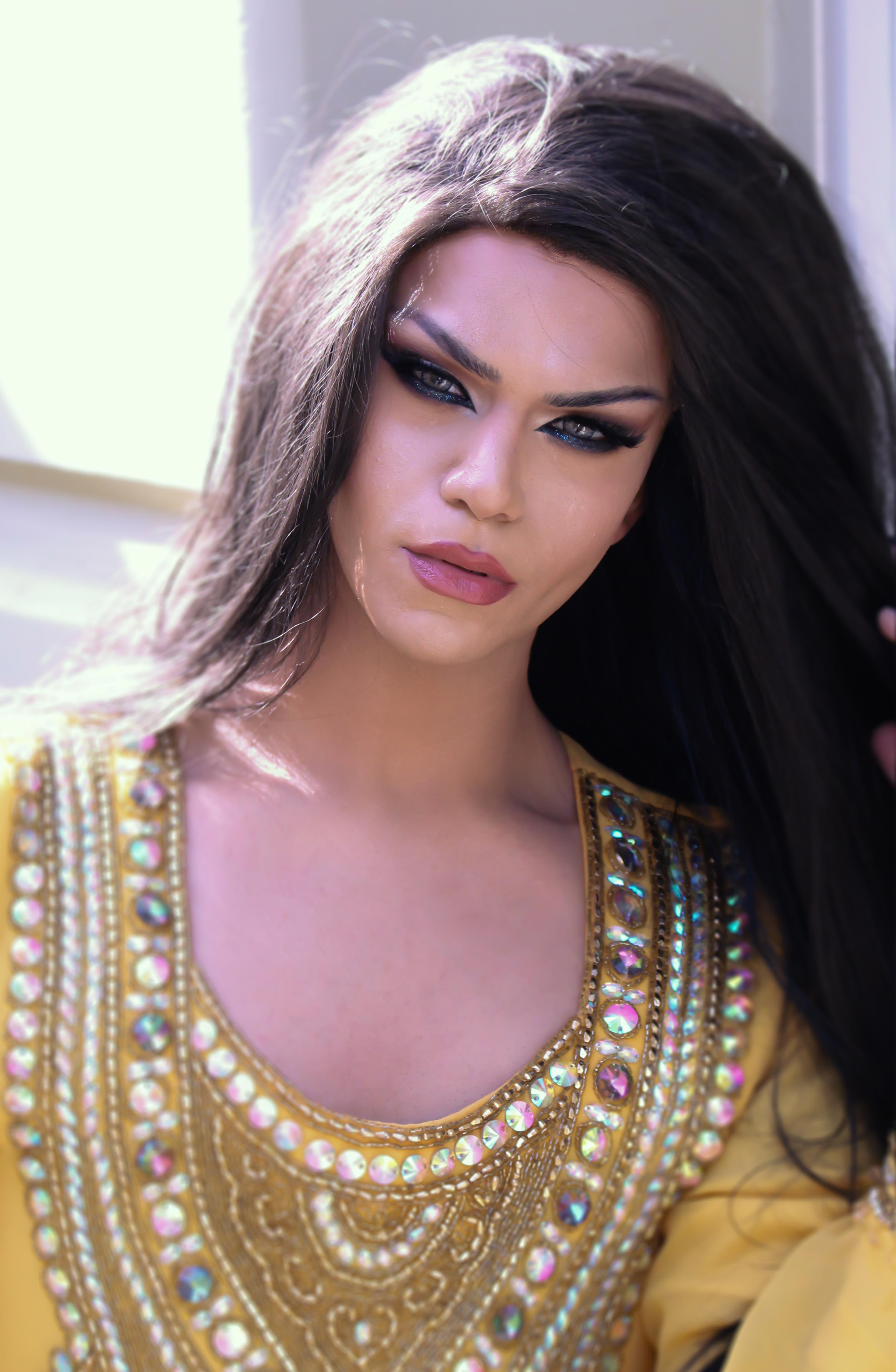 “They interrogated us, looking to see if we shaved any parts of our body (if you shave your legs here, turns out you’re gay). They found nothing, so one took our phones, searching through all the galleries. It was terrifying.

“Thank god I was lucky, because I reformatted my phone the day before. If I didn’t, I wouldn’t be speaking to you. I’d be in jail. If they found out about the make-up, YouTube, Instagram, and how I put myself out there? It’s a punishable crime. In some ways I feel lucky. If I were born in Saudi Arabia, the death penalty would be looming.

“Once I went out in full drag here, to a convention. When I’m dressed as Arabia, I feel powerful, like nobody could touch me. It’s mostly because of the confidence that make-up and drag gives you, it’s an armour that covers your entire body. That’s what I love.

“If I were to go now to my mother, and show her pictures of me in drag, the first thing she will say is, ‘Why are you doing this? What if you get caught? What if someone sees you?’ Her concern would be for my safety and reputation, and I don’t want her to worry. It’s why I isolate them from what I do.

“My sisters are more open-minded, one of them knows that I’m gay and about my drag. She loves it. Sometimes I see the concern in her eyes, when I tell her I’m doing a video or a new photoshoot. I can hear and see her anguish. She worries for me, and for the entire family.

“At first I struggled with my religion. I’m Muslim, and was quite religious when I was young. There were things that didn’t make sense, the way these religious rules and regulations were taught to me. I got told that gay people are sick, and that I would go to hell. It made no sense, as I believe in acceptance.

“I don’t think my country will accept gay people until there’s mass societal upheaval. The government is based on religion, and until that changes we’ll always be outsiders. But things are changing, and fast. In Dubai, it’s more open-minded right now, I’ve heard there are even underground drag shows where US drag queens can go and perform, and Middle-Eastern trans women are living there after transition.

“Getting online, and using social media is definitely a way of changing the way young people see gender and sexuality; exposing ideas that would otherwise be excluded from Kuwaiti life. I know soon I’ll need to take the leap from the virtual, and Arabia Felix will take to the physical, and maybe one day the streets.”

Linkedin
RELATED ARTICLES
OTHER ARTICLES
Jermain Cikic reflects on his experience of visiting the island of Samos, Greece, in the summer of 2021.
Hundreds gathered together to protest the policing bill by making as much of a racket as possible.
The musician, DJ and founder of Monika Enterprise reflects on a career defined by revolution and rule-breaking.
Those set to be impacted by the governments ’undemocratic’ bill explain why it risks silencing them.
The novelist discusses his electrifying debut, which offers a deft examination of masculinity under late capitalism.
The internet furore surrounding a certain NY-based furniture designer should make us question whether condemning people in the harshest possible terms harms more than it helps.