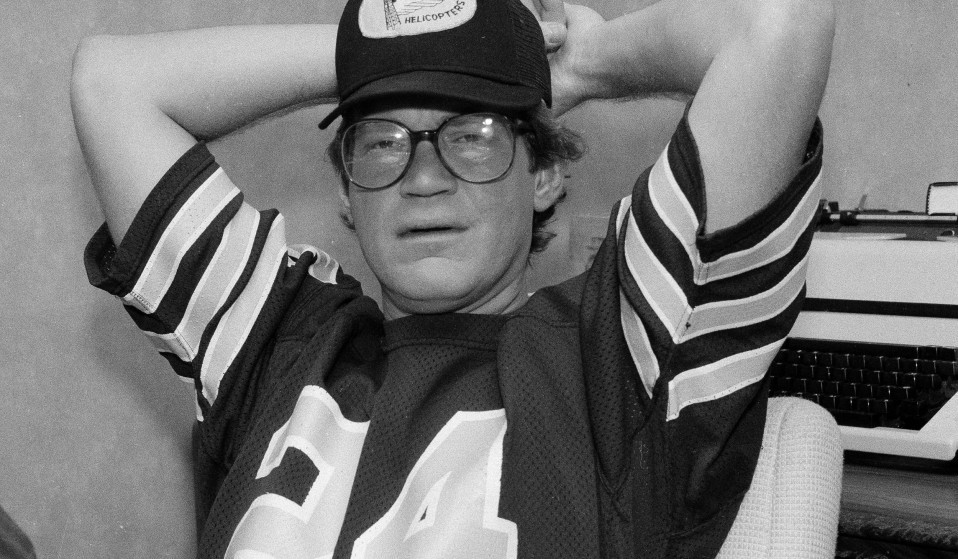 After 33 years, 22 seasons and over 6,000 episodes, David Letterman has said his last goodbye on The Late Show. Here are a few of our favourite Letterman moments.

After 33 years, 22 seasons and over 6,000 episodes, David Letterman has said his last goodbye on The Late Show. Here are a few of our favourite Letterman moments.

David Letterman’s triumphant reign as America’s longest serving talk show host has earned him 57 Emmy nominations – the second most ever – winning 6 of them, along with a whole host of other awards and accolades. Plus, he brought the word ‘Jackass’ to TV.

Here are just a few of our favourite Letterman moments:

Weatherman
Letterman’s career began on Indianapolis stations WNTS (AM) and WLWI (now called WTHR) as a talk show host, anchor, and weatherman. He quickly became renowned for his unpredictable on-air behaviour, reporting on weather for fictitious cities and predicting hail stones “the size of canned hams.”

In this clip, a satellite film glitch has had some interesting consequence. Letterman points out these “government dirty dealings” – “the higher-ups have removed the border between Indiana and Ohio, making it one giant state. Personally, I’m against it.”

That time Cher called him an asshole
Just one of his many feuds, Letterman made a running joke of Cher’s many relationships with younger men, so it’s no surprise that when she finally made her debut after four years of mocking, it was sure to be memorable. This clip from 1986 shows one of their many sparring matches, with Cher admitting that she didn’t want to do the show because she thought Dave was an “asshole.” She’s continued to appear on his show ever since, bidding him farewell two weeks ago.

The world thought he’d gone crazy – failing to string together a single sentence and sporting a dishevelled-looking beard and sunglasses. We, and Letterman, learned Joaquin Phoenix’s wacky appearance on The Late Show in 2009 was just a prank as part of his mockumentary I’m Still Here, but Letterman shows who’s the pro.

One of his most popular pranks of all time, Letterman’s spell working the drive-thru at Taco Bell ended with some hilarious results – greeting unwitting customers with awkward requests, asking if one could buy him lunch and pissing off countless others, including one woman who just drives off. Eventually, one frustrated customer asked him if he was Howard Stern. Cue even more laughter from both Letterman and the studio audience.

An all-star cast including Tina Fey, Alec Baldwin and Bill Murray salute Letterman in his final top ten list, telling him all the things they wish they’d said.

Linkedin
OTHER ARTICLES
A 28-year-old from Texas was forced to travel across state lines for an abortion that would save her life and end a pregnancy that her baby had no way of surviving.
Danny Burrows discusses his new series of images documenting an pacifist anabaptist community who lead an alternative way of life.
In the latest instalment of Photographers in Conversation, the creator talks portraiture, platforms and taking inspiration from Little Simz.
We introduce our series spotlighting the voices of people who’ve been impacted by anti-abortion laws and anti-choice protestors.
A young woman recounts her experience of being harassed by anti-choice campaigners as she was seeking an abortion in Glasgow.
Steel City is often overlooked when it comes to the country's cultural radar despite its role in shaping electronic music.