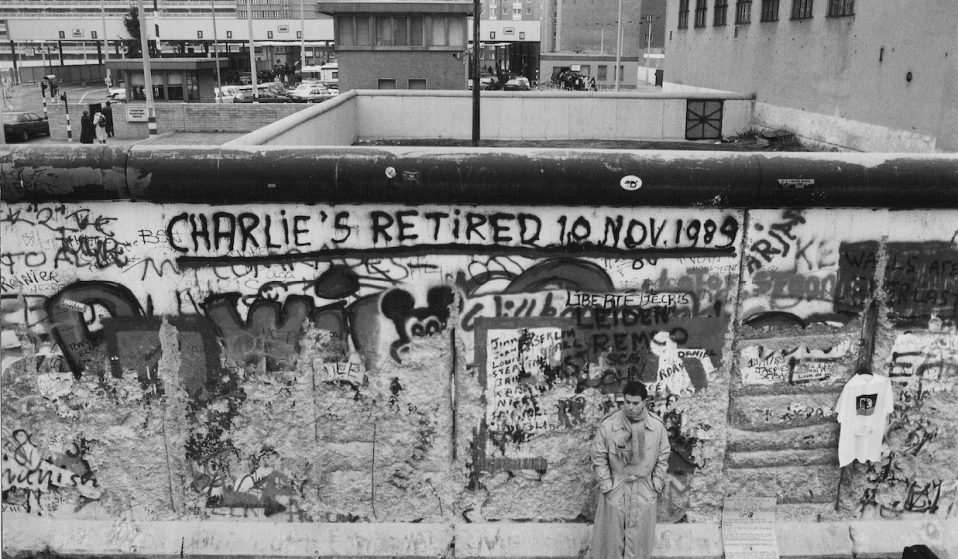 Photographer Richard Davis reflects on chronicling the early days of freedom and community of like-minded artists and radicals that emerged in West Berlin.

Photographer Richard Davis reflects on chronicling the early days of freedom and community of like-minded artists and radicals that emerged in West Berlin.

From 1961 to 1989, the Berlin Wall stood as physical manifestation of the Iron Curtain. Snaking 155 km around West Berlin, the Wall featured over 300 watchtowers where border guards stood at the ready for defectors trying to escape East Germany (DDR).

The Wall immediately became a hot spot in the Cold War, as thousands illegally fled into West Berlin. In October 1973, DDR officials issued an order stating, “Do not hesitate to use your firearm, not even when the border is breached in the company of women and children, which is a tactic the traitors have often used.”

Guards could shoot-to-kill, or more cruelly let the wounded bleed out inside. This became known as the “death strip” within the Wall, creating a widespread feeling of hopelessness and desperation in East Berlin. The Wall symbolised the unforgiving schism between East and West that few imagined would end in anything other than mutual destruction — until the Soviet Bloc began to crumble at the end of the 1980s. 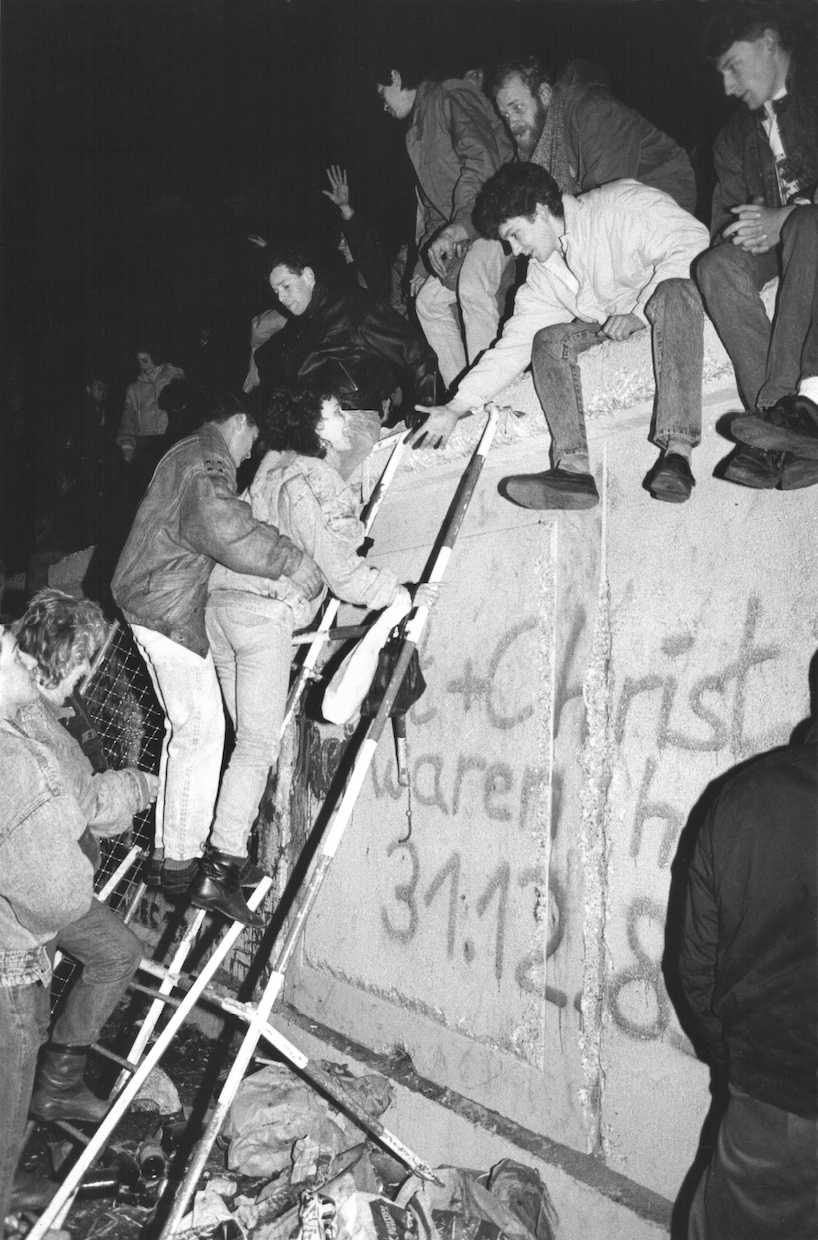 The winds of freedom swept across the East, as country after country overthrew USSR control. On November 9, 1989, thousands of East Germans gathered at the Wall, demanding the guards open the gates. Outnumbered and outflanked, the guards gave in. That night the Berlin Wall fell.

Shortly thereafter, British photographer Richard Davis received a last minute invitation from a friend for a one-week trip to West Berlin. He jumped at the opportunity, camera in tow, chronicling the early days of freedom in the new book, Berlin, December 1989 (Cafe Royal Books).

“When I arrived in Berlin, it was full of burned out cars and Brutalist architecture,” Davis says. “It was really grey but the atmosphere was electric. There was a constant chipping noise of people hacking away at the Wall. You hear it day and night.” 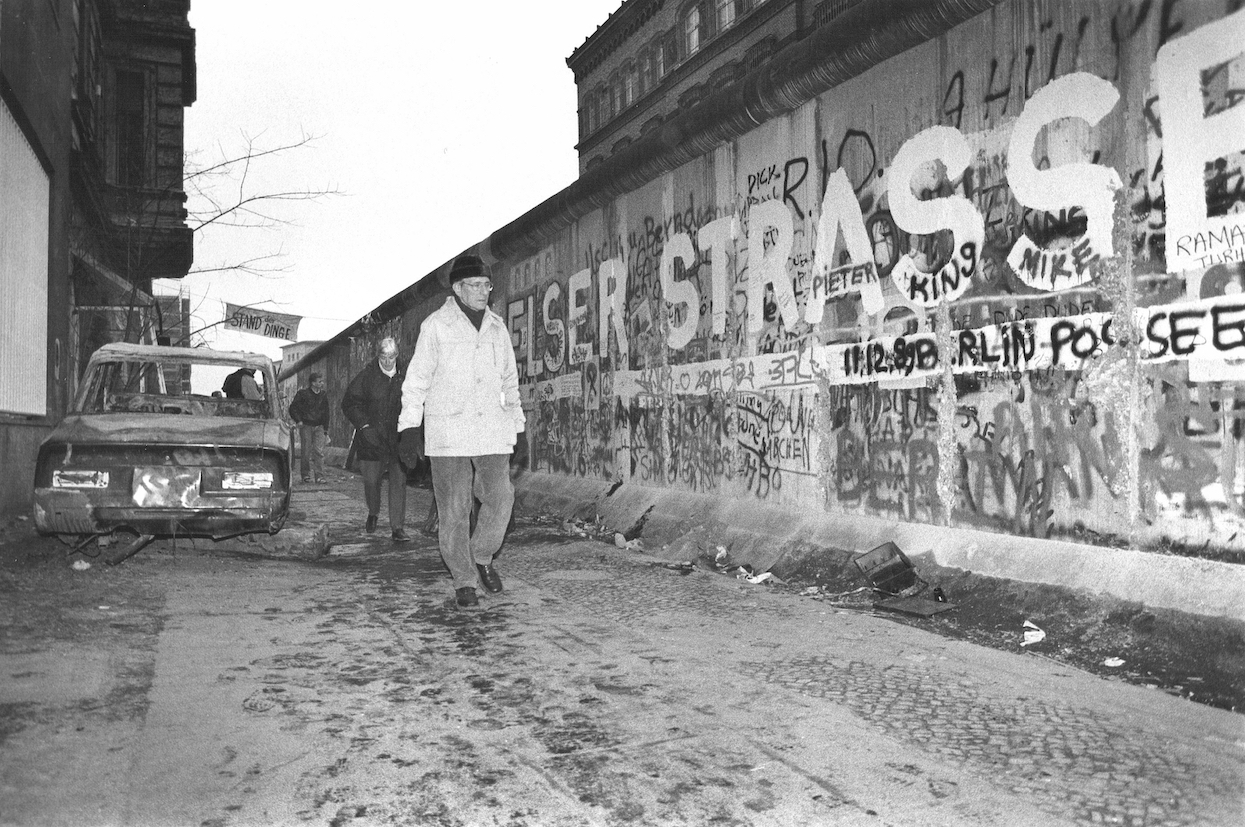 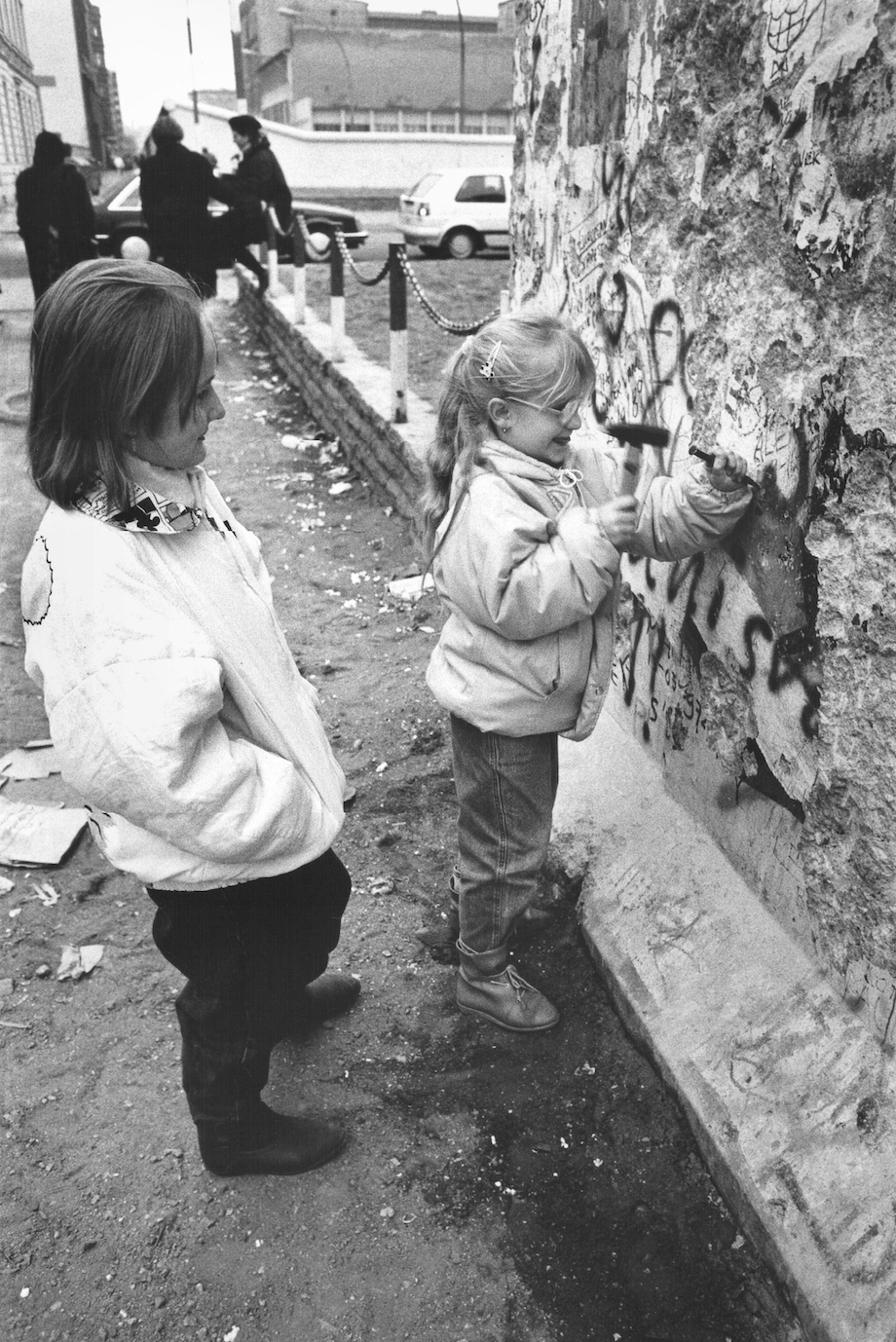 Davis felt an immediate connection to the people and the environment, which reminded him of Hulme, where he was then living among a community of artists, musicians, punks, and Travellers while teaching photography at Manchester Polytechnic.

When Davis arrived in West Berlin, he saw a city that was set apart from the rest of the world “like an island”. He immediately felt comfortable among the community of like-minded artists, radicals, and outcasts similar to those he knew back home.

“I was living in a black and white world those days,” says Davis, who transformed his Hulme flat into studio and darkroom, and poured every pound he earned into his practice. “The Berlin Wall was very black and white. There wasn’t a lot of colour. But you knew it was a special place.”

Inspired by Wim Wenders’ seminal 1987 movie, Wings of Desire, Davis explains, “Film is a massive influence on me, probably more so than photography. It really summed up the mystery of Berlin and the history of the place. It totally influenced how I took photos with the space, the expanse, and the desolation. In my mind, Berlin was magical.” 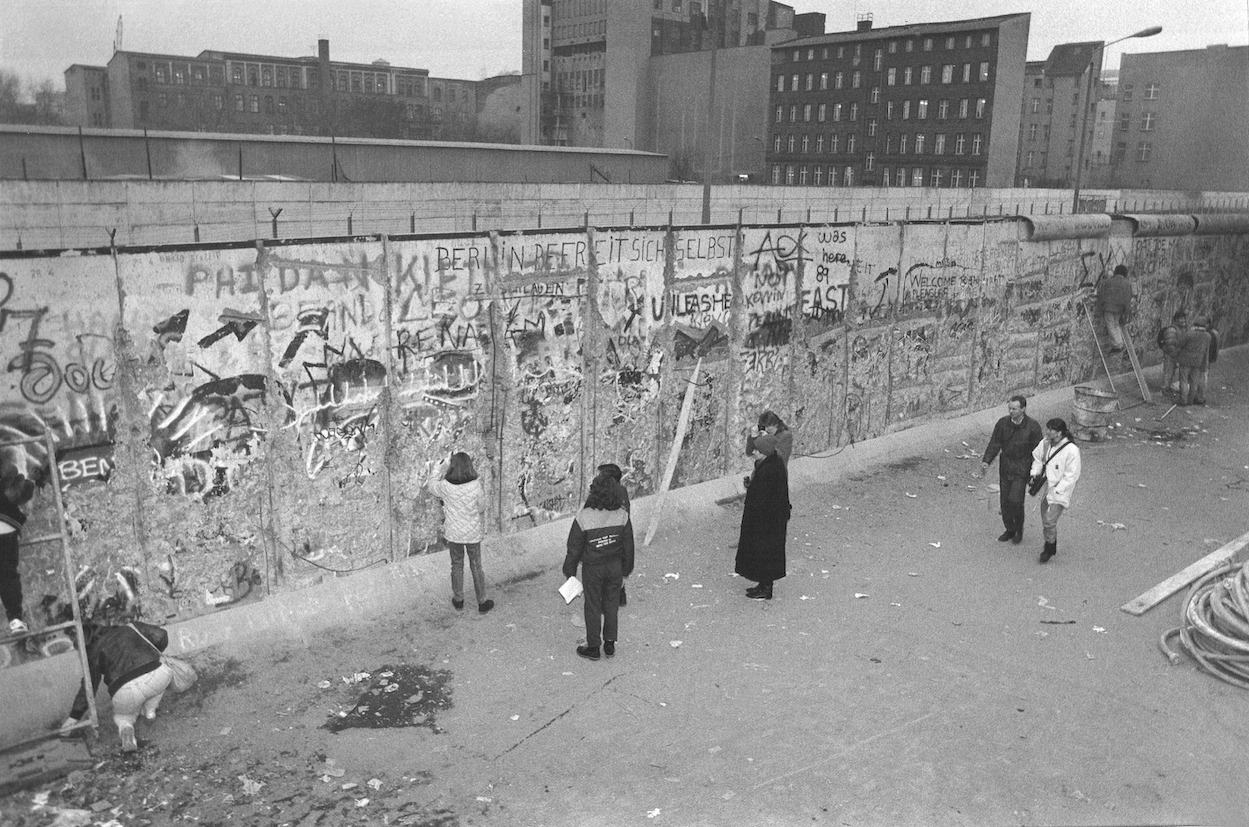 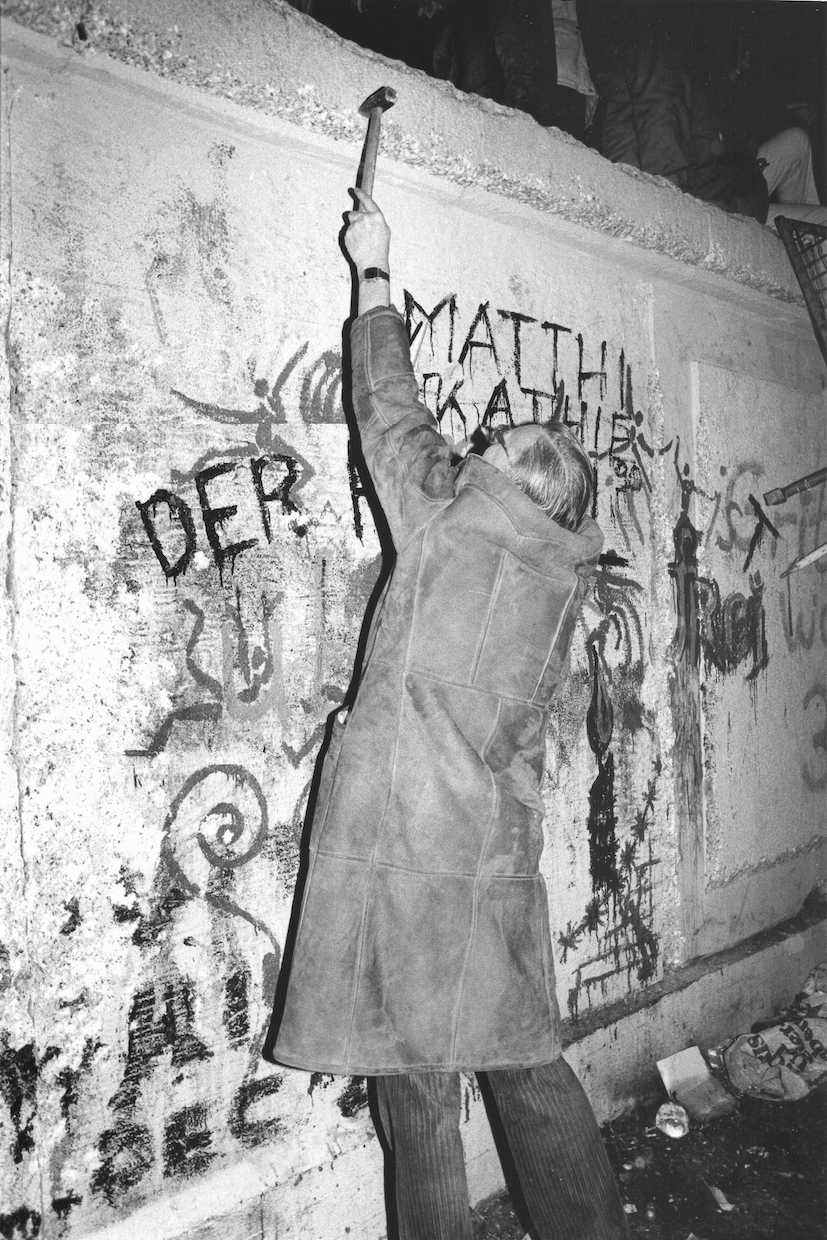 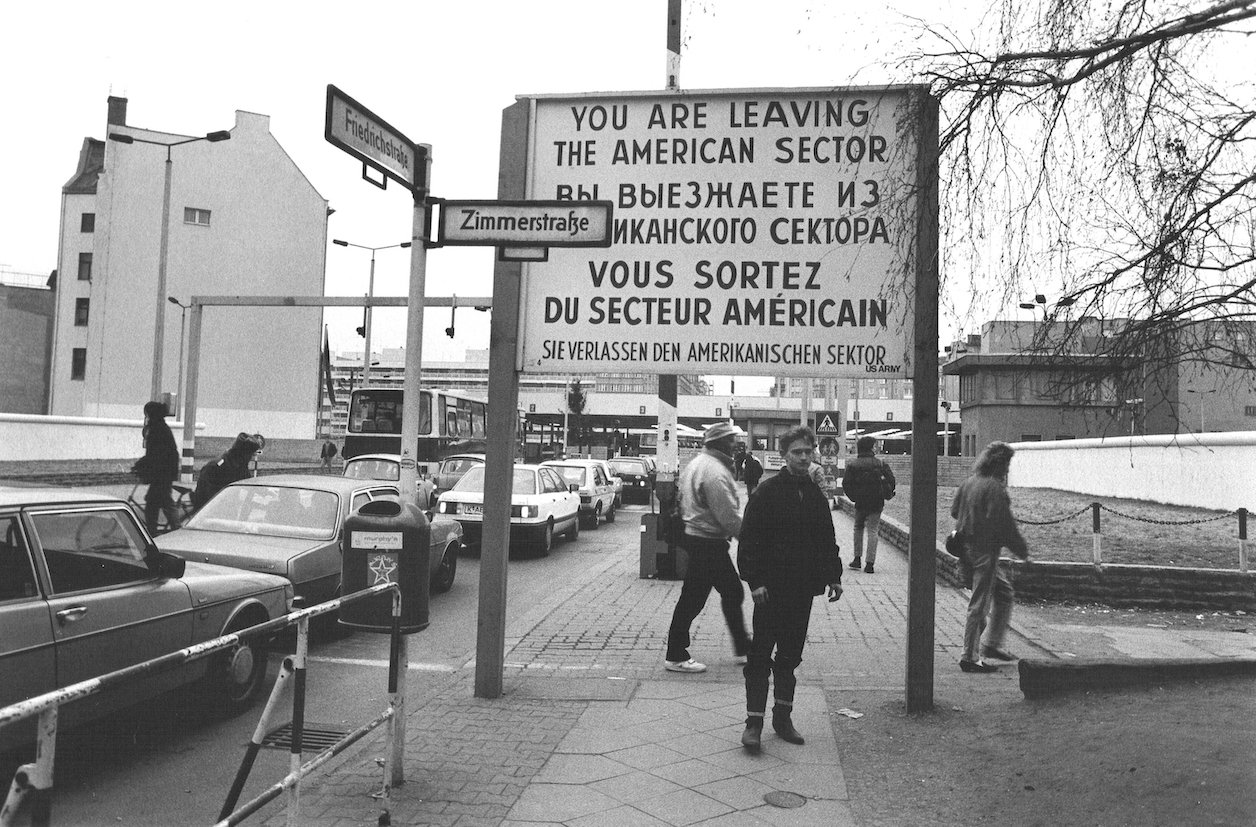 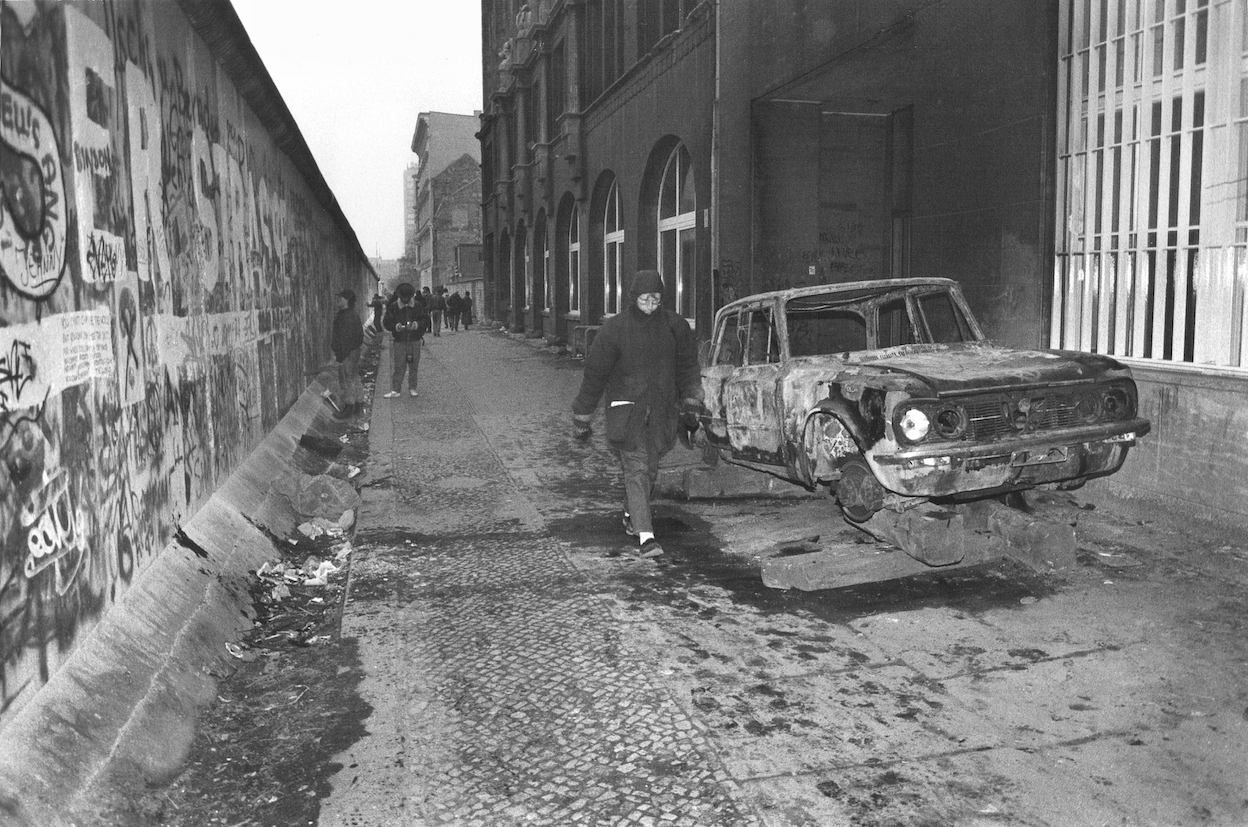 Berlin, December 1989 is out now on Cafe Royal Books.

Linkedin
OTHER ARTICLES
A new podcast is opening up the conversation between trans women and trans amorous men in the hope of building coalitions.
Campaigners reflect on what the supreme court’s decision to allow buffer zones in NI means for the future of reproductive rights in the UK.
A new film from Berghaus traces the story of Adam Raja, who left behind a turbulent upbringing to discover the healing power of climbing.
Zsófia Sivák’s ongoing project documents the country’s tavern culture, preserving a once defining part of rural life.
After a two-year hiatus and a new album, the Nigerian artist is riding high. Now, he wants to bring his alternative, genre-bending sound to the world.
After fleeing the war in Ukraine, people are finding it impossible to secure affordable and decent housing in the UK.