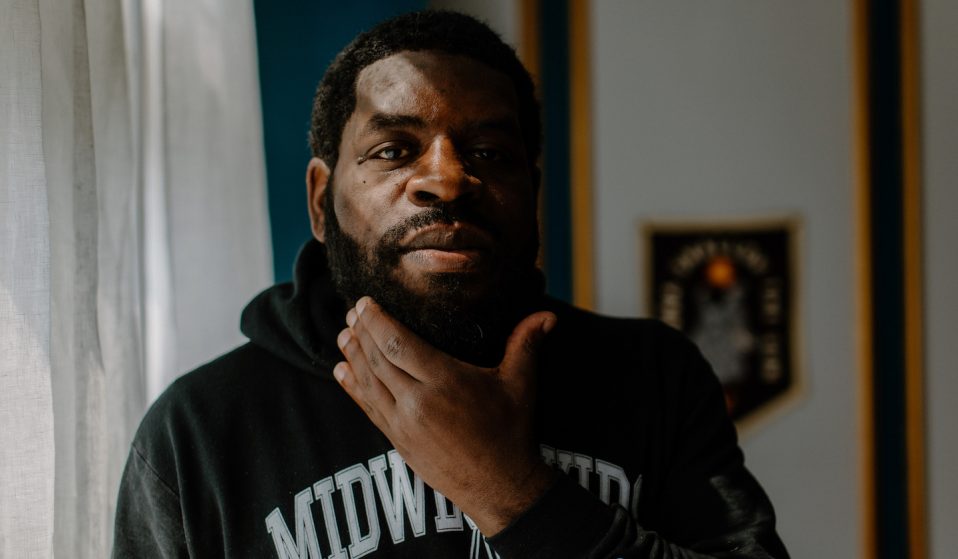 The 37-year-old poet and critic speaks to Huck about his new book, which offers a stirring meditation on Black performances, cultures and communities in the United States, and his own personal experiences of love and grief.

The 37-year-old poet and critic speaks to Huck about his new book, which offers a stirring meditation on Black performances, cultures and communities in the United States, and his own personal experiences of love and grief.

To read Hanif Abdurraqib is to be embraced in the middle of chaos. In his latest book, A Little Devil In America: In Praise of Black Performance, he does what many great writers do, which is to illuminate and join the dots between connections readers may once have failed to see.

A Little Devil in America seamlessly takes readers from Beyonce’s Super Bowl performances, to ’30s ballroom dance marathons, to card games, to dark living rooms in Ohio, to a schoolyard fistfight, to a Dave Chapelle skit and much more. Over nearly 300 pages, Abdurraqib welcomes us into a world that is vulnerable, poignant and underpinned by a quest for celebrating happiness.

Across a spectrum of topics, Abdurraqib crafts a universe where Black joy is centred and celebrated. It is a book rooted in its love for culture, for people who have graced our screens, and radios. Abdurraqib also leaves moments for contemplation: on Blackfishing, the concept where non-Black individuals perform Blackness on social media for clout, Abdurraqib writes, “It would be humorous or fascinating if it wasn’t so suffocating. I would laugh if I was not being smothered by the violence of the imagination.”

Speaking over Zoom from his home in Ohio, the 37-year-old tells me: “When I sit down to write a book, particularly a book of nonfiction, I’m first of all seeking threads that can run through the book… I’m often trying to pull together so many ideas, that I need those threads to embrace me when I get lost.”

For a decade, Abdurraqib has been known for his tendency to work across a range of projects all at once. He worked at MTV News while writing his first book, They Can’t Kill Us Until They Kill Us, which was released in 2017 to critical acclaim. A year before that, he released his first poetry collection, The Crown Ain’t Worth Much and in 2019, the non-fiction book, Go Ahead In The Rain: Notes On A Tribe Called Quest – a love letter to the seminal 1990s hip-hop group – was published

All three projects have been nominated for multiple awards. The poet, essayist and critic has also recently hosted two podcasts: Lost Notes, which was “a collection of the greatest music stories never told” and Object of Sound, which sees him interviewing musicians and aims to offer multiple ways to discover new music. Abdurraqib also works on 68 to 05 – a personal playlist for each year from 1968 to 2005.

In anticipation of A Little Devil in America: In Praise of Black Performance hitting the bookshelves, Huck caught up with Abdurraqib to discuss his writing process, celebrating Black joy and dealing with grief. 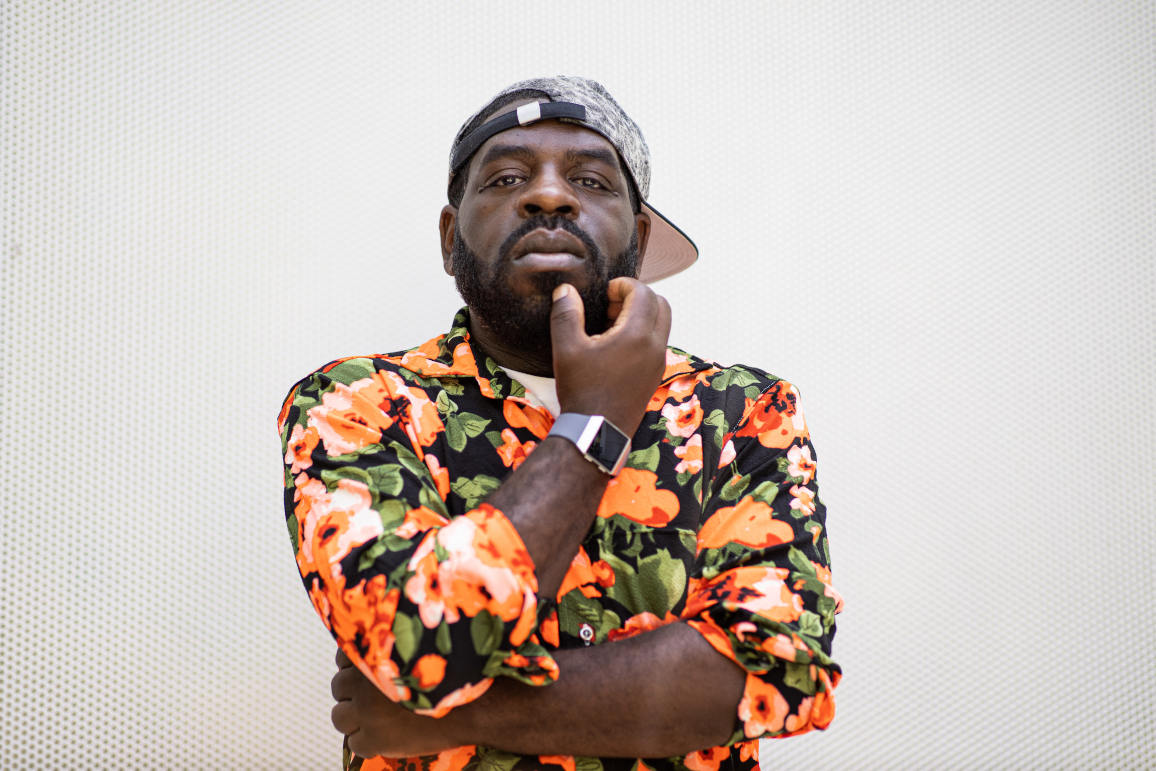 How do you manage to juggle so many projects simultaneously?

I’ve maybe gotten very good at choosing things [which] excite me. This isn’t me falling into the capitalistic notion of ‘If you do what you love, it is never work’. I’m not trying to sell that lie. What I am saying is that because I choose things that excite me, I want to spend time immersed in them. It’s very natural that my excitement feeds into my other excitements. When I’m writing, I’m not necessarily looking for answers. I’m looking for newer, better questions to pursue and through that pursuit, some of the projects reveal themselves.

There’s a real sense of hopefulness and joy that is exuded in A Little Devil in America. From conceiving of the book four years ago in 2017, was that always your intention?

Oh, yeah, this is the most fun I’ve ever had writing a book, I think it’s because it’s grounded in celebration. I was interested in what would happen if I removed the investment in whiteness, or if I removed even a curiosity about whiteness, and the motives of whiteness when it comes to appropriating Black art or Black performance. In removing that investment, it meant that all that was left was celebration.

It marks quite a noticeable shift from your previous project, They Can’t Kill Us Until They Kill Us, in which you work through themes of grief. When did that switch happen?

Well, I don’t know if there’s a switch that fully happened. I think I’m always considering grief and the way grief can be worked through, both collectively and individually. But, in this book’s case, especially, I did not want to ruminate solely on grief. I was thinking about the idea of delivering people flowers while they’re alive, and if they aren’t around, reminding and recontextualising their lives.

So I suppose the shift was thinking about how to honour the living, and how to uplift the dead with a level of gratitude, and not just grief. It’s some kind of miracle that we get anyone that our lives can intersect with who enhance our own lives.

How do you decide what to write and whether you are the right person to do so?

I’m always asking myself the question whether I’m the right person to write something… and, a lot of times, the answer is no. I’m not going to add to the noise with something I’m not confident I can say anything new or interesting about. Restraint is a big organising principle for me, and I think it also fuels the curiosity I hold dear. I love to dig my way to a better understanding, even if I’m not producing any writing at the end of that digging.

At the end of the book, you speak about your mental health very candidly and how your brother helped you when you were in a dark place. What made you want to write about this?

I’m someone who understands life and appreciates life, but also understands it as an ongoing struggle for me, and a lot of people I know and love. I did not think I could write a book that was only revelry and nothing else without also getting to the point of talking about the ways I have learned to or come to appreciate joy. Joy is not promised, and I know that it has, for me, been fleeting.

I don’t believe it [joy] is always something I’ll be able to access in the same measure that I was able to while writing this book. It felt important to also show the place I’ve been in, when I’ve wanted to reach out to someone, anyone who would hear me in the hopes that I wasn’t alone in what I was going through. Putting it out on the page, in that way, was also a homage to my brother who saved my life back when I needed him to.

This interview has been edited for length and clarity

Hanif Abdurraqib will discuss his book A Little Devil In America at a special online event streamed from the Southbank Centre on 25 March.

Linkedin
RELATED ARTICLES
OTHER ARTICLES
A 37-year-old woman shares how her abortion led her to become a clinic worker, and the abuse she’s received in that role.
Rogue landlords are exploiting young and inexperienced renters and leaving them in mental and financial turmoil, reports Niall Hignett.
Financial turmoil is pushing people who work in the sex industry into more dangerous and desperate situations as a means of survival.
In his 2008 series, the photographer pictured himself as Angela Davis, Martin Luther King Jr., Malcolm X, and other prominent figures.
Ahead of the release of their first collaborative album, the producer and rapper talk psychedelics and the state of UK hip hop.
Yesterday thousands gathered outside Buckingham Palace after news of the Queen’s death broke.