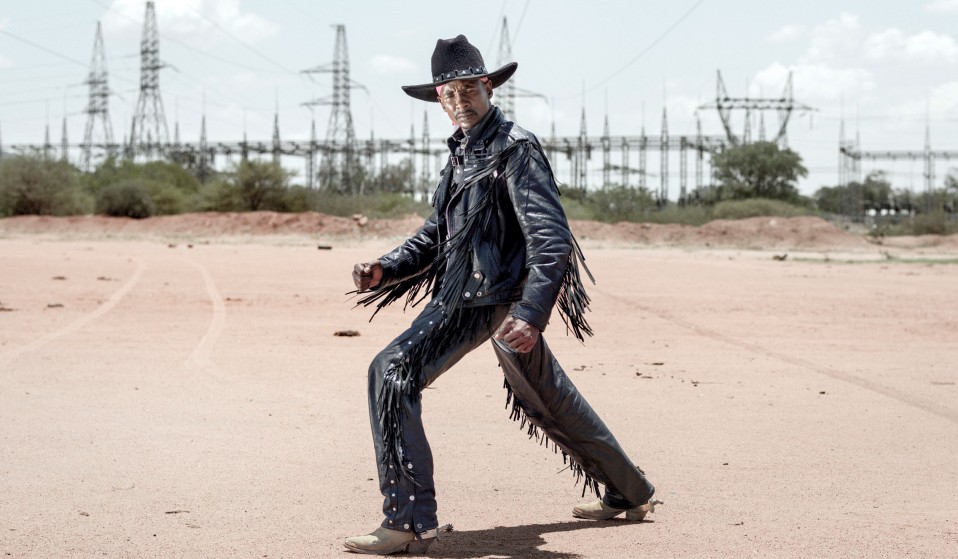 Botswana’s heavy metal culture gets hyped for all the wrong reasons, but beneath the surface is a DIY subculture uncorrupted by the outside world.

Botswana’s heavy metal culture gets hyped for all the wrong reasons: namely the desert-defying style of its leather-clad crews. But beneath the surface is a DIY subculture uncorrupted by the outside world.

Metalheads all the world over can agree on one thing: its culture, just like its music, eschews pretence. Nowhere is this better reflected than in Dumisani Matiha, lead singer and rhythm guitarist of Metal Orizon, one of Botswana’s heaviest outfits.

On an unseasonably warm afternoon, the 41-year-old is taking time out of his day job as a farmer to explain what distinguishes this metal movement from other scenes spread out across the globe.

“We see ourselves as warriors and poets,” says Dumisani. “This is a calling. We use metal to speak to our social conditions as Africans: the struggles, the climate we operate in… It might be cheesy to you but, to us, metal is just another way of speaking about romance. To us, love is hardcore, yo!” 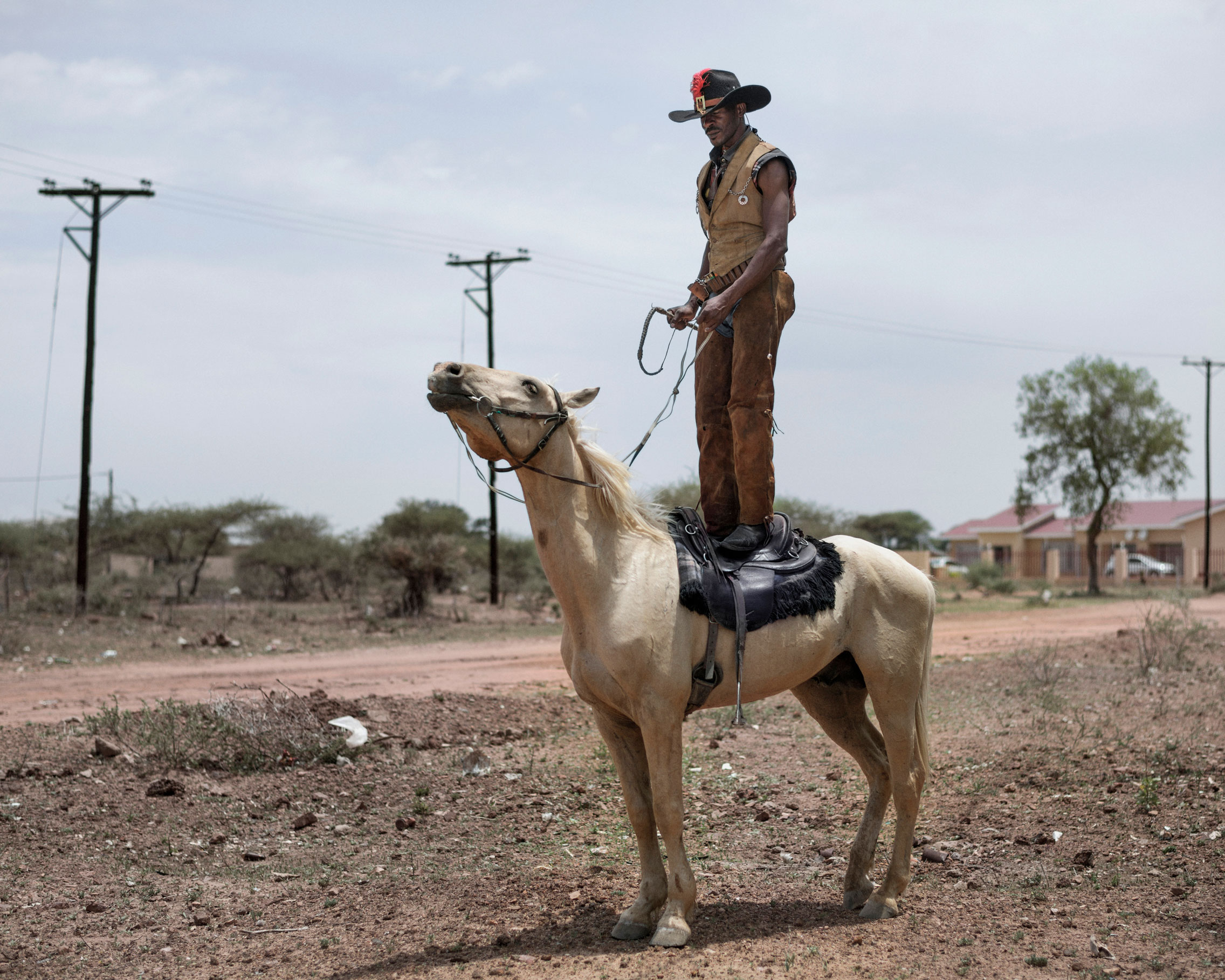 ‘King Taker’, 38, is a self-employed welder who describes himself as a ‘brutal cowboy’. 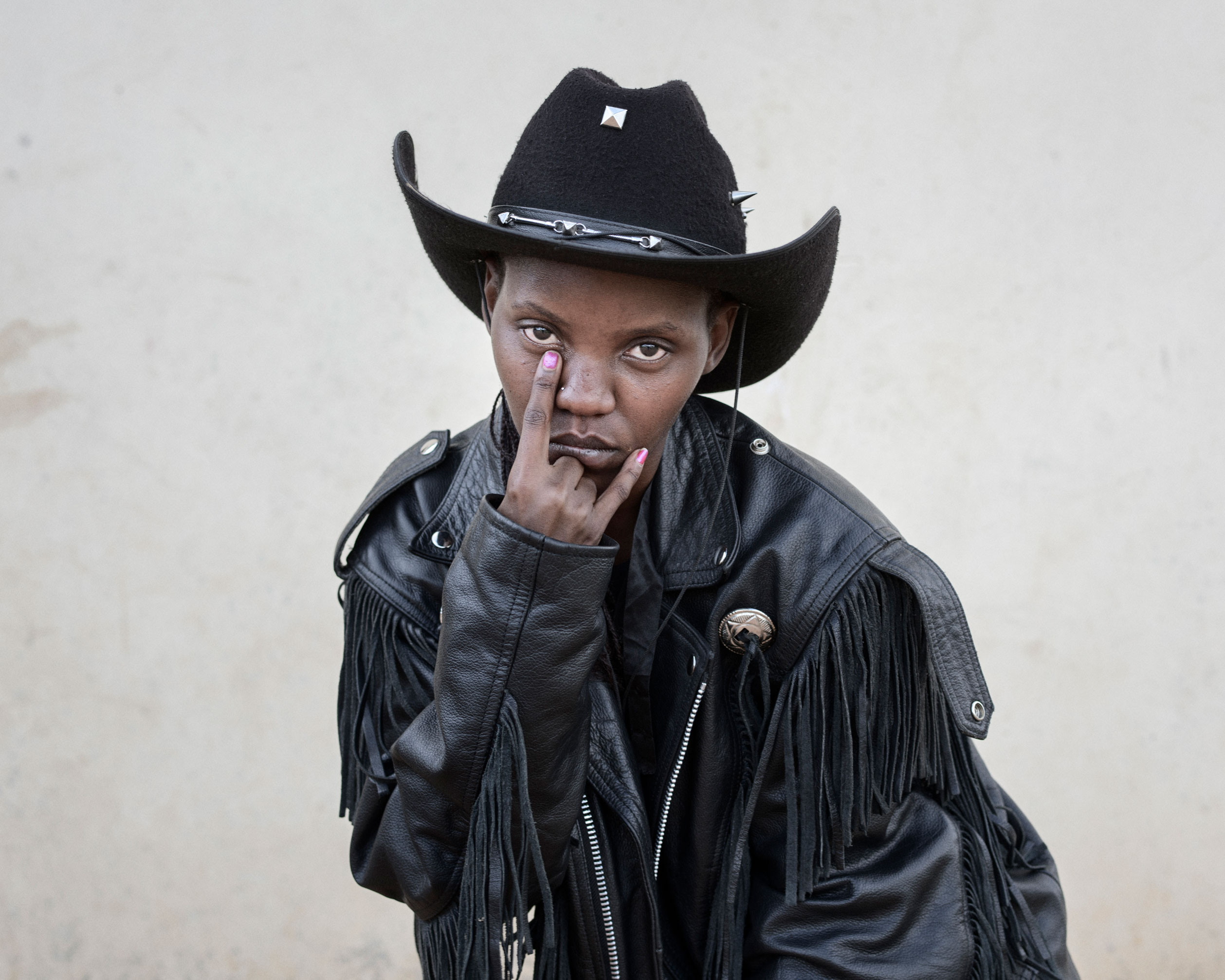 ‘Hysteria’, a 27-year-old graduate whose favourite local bands are Overthrust and Amok.

Dumisani is also one of the few band leaders who does not go by one of those hilariously kitsch monikers that sound like they’ve been lifted from the world of wrestling – like ‘Cannibal’ or ‘White Devil’ – the sort of nickname intended to put even more distance between you and everyone else.

“It is true that when the scene started over two decades ago, some sections of Botswana’s population just couldn’t make sense of us,” says Dumisani. “Some still don’t today. Some thought we were an aberration – Satanists running some ominous cult, out to feast on their children’s blood – and had silly notions of what metal is supposed to be about.”

Today the scene’s supporters remain firm if not always visible, largely made up of the country’s disgruntled youth and political renegades. Still, it’s easy to understand how these figures would arouse perplexed glances. 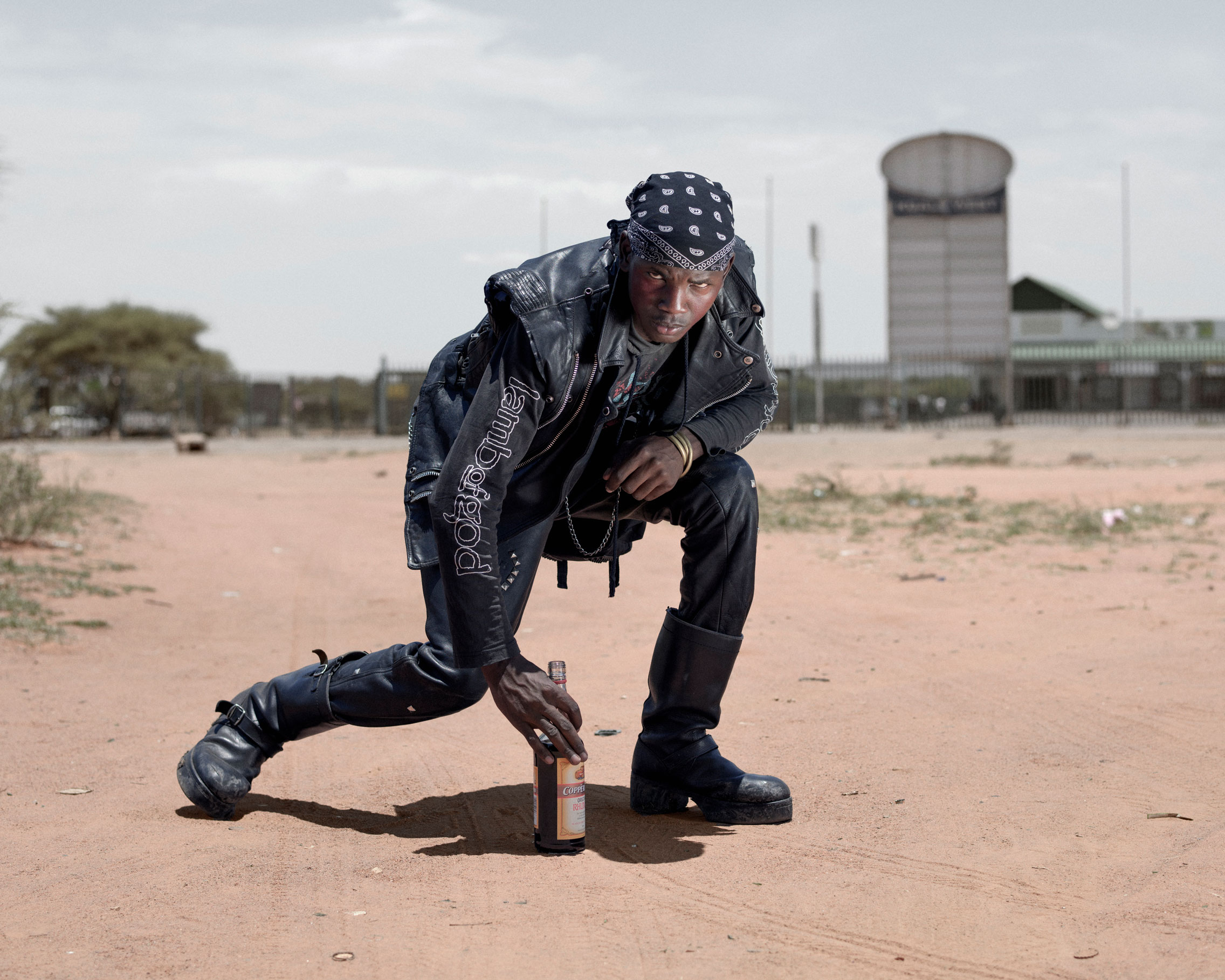 ‘Psychosomatic Torture’, 20, whose uncle was a member of local metal band Nodd. 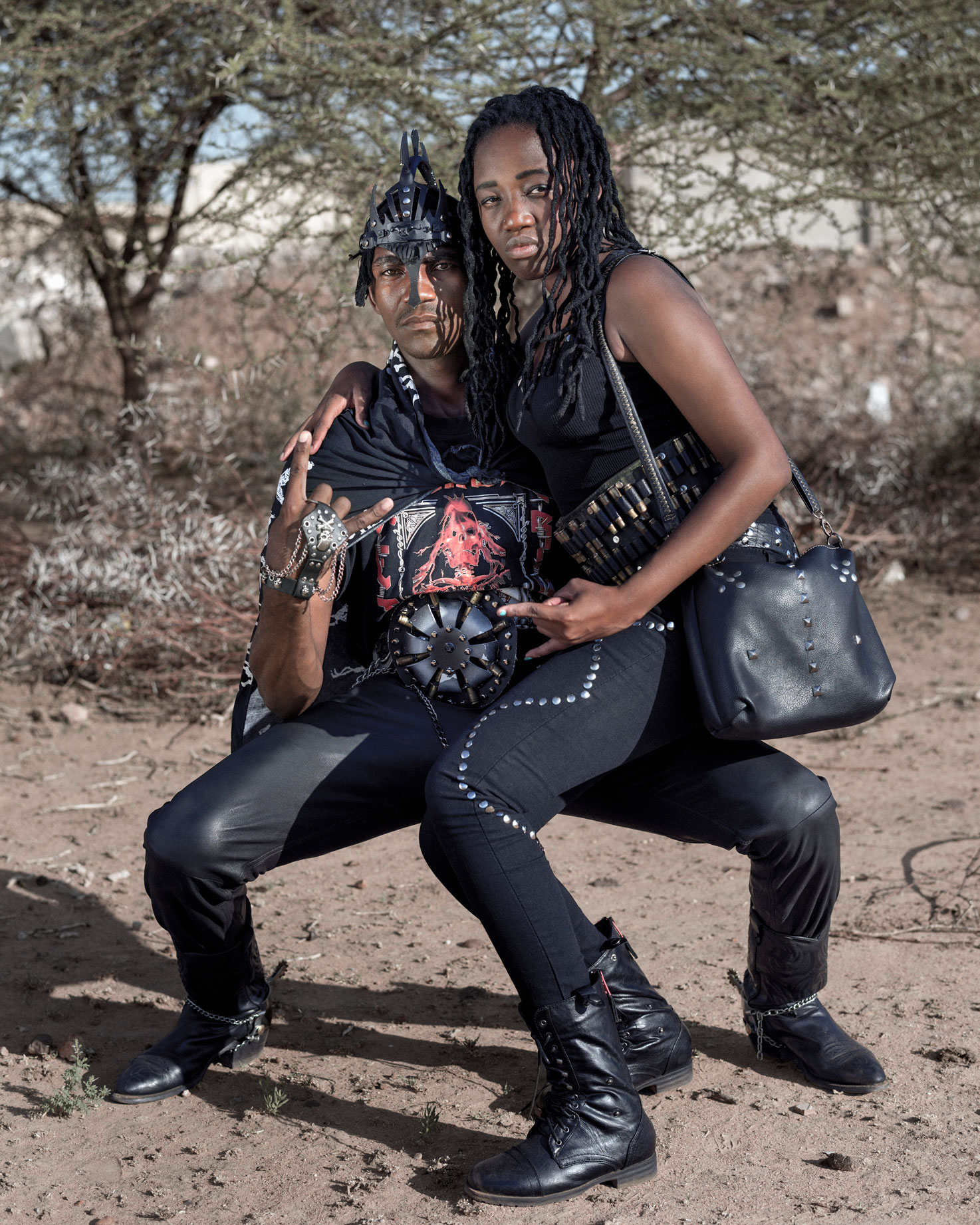 ‘Hardcore Series’ and his 28-year-old girlfriend ‘Dignified Queen’, whose brother and father were rockers.

Botswana is 70 per cent desert and most of its metalheads dress in old-school biker gear – made even heavier with studs, chains and all kinds of trinkets – topped off with leather cowboy hats. They are a throwback to a purer time, an era when no heavy metal fan would have dreamed of Metallica and Lou Reed making an album together, let alone calling it Lulu.

Musically speaking, the metal scene in Botswana is neither heavy nor metal. It’s a combination that sounds impossible when articulated: a mix of African hard riddims, mid-70s Manchester punk, cacophonous dub, psychedelic swamp music, free-wheelin’ progjazz and some sped-up Ohio funk thrown in for good measure. 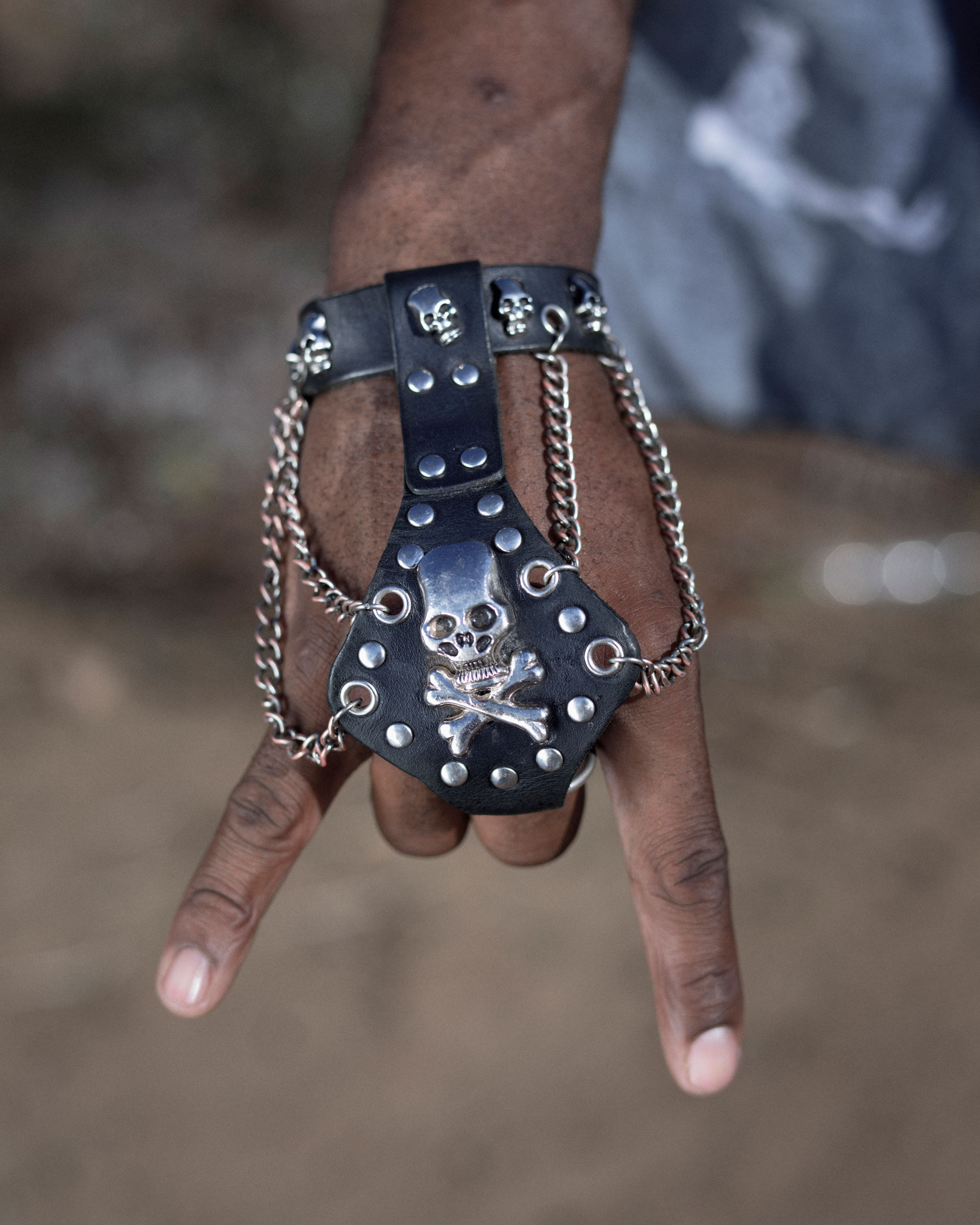 But globally speaking, it’s revered for all the wrong reasons. Northern hemisphere media outlets in particular tend to regard the subculture as a freakish novelty: ‘Metalheads in Africa! Who knew?’

“Look, we do not claim to be inventors of metal,” Giuseppe Sbrana of Botswana metal band Skinflint once explained to me. “What we know for sure is that the founding root, the essence, the magic and ritual that lies at the centre of rock’s performative culture – its quest for freedom and destruction as a means of healing and rebuilding – is African. No doubt.”

“We are not even talking about the American South’s blues connection,” he went on breathlessly. “We are talking about something deeper: the original healing pilgrims in the Kongo squares; the pounding drums, accoutrements, scarification, dances, poetry and screams issuing out of communal séances deep in BaKongo land. 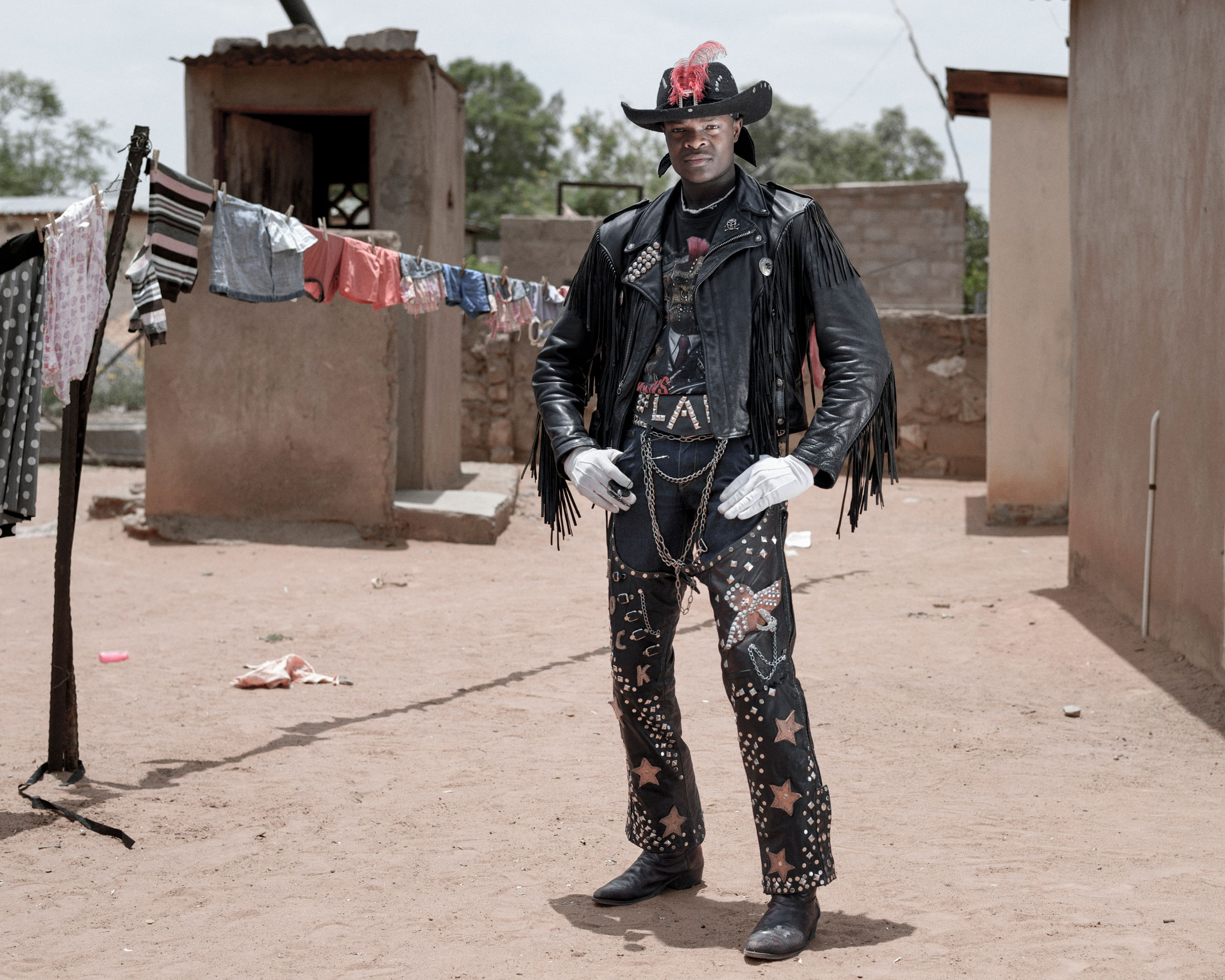 Blade, 21, works at a bakery for supermarket chain Woolworths. He started listening to metal in 2012 after being inspired by videos on MTV.

While Botswana’s metalheads are charmed if not surprised by the attention, they’re not all that bothered by the fleeting gaze of fame. They are well aware that they’re being used as fodder and filler: fawned-at for their otherness.

“Ah, man…” begins Dumisani, sighing. “Sure, everyone says Botswana metal has gone mainstream. But we really have not. Most of us are struggling. Most of us do this thing as an expression of fun. We love it, but it’s more of a hobby than a career. Most of us keep full-time jobs as farmers, policemen, civil servants and generally just jobless folks.”

“If we are as accepted as they say we are,” adds Giuseppe. “If everyone converts to this metal thing and becomes a metal lover, then what’s the use of us doing this? We really don’t care whether the culture is appropriated and goes mainstream or not. What matters is that the music stays true to its roots!” 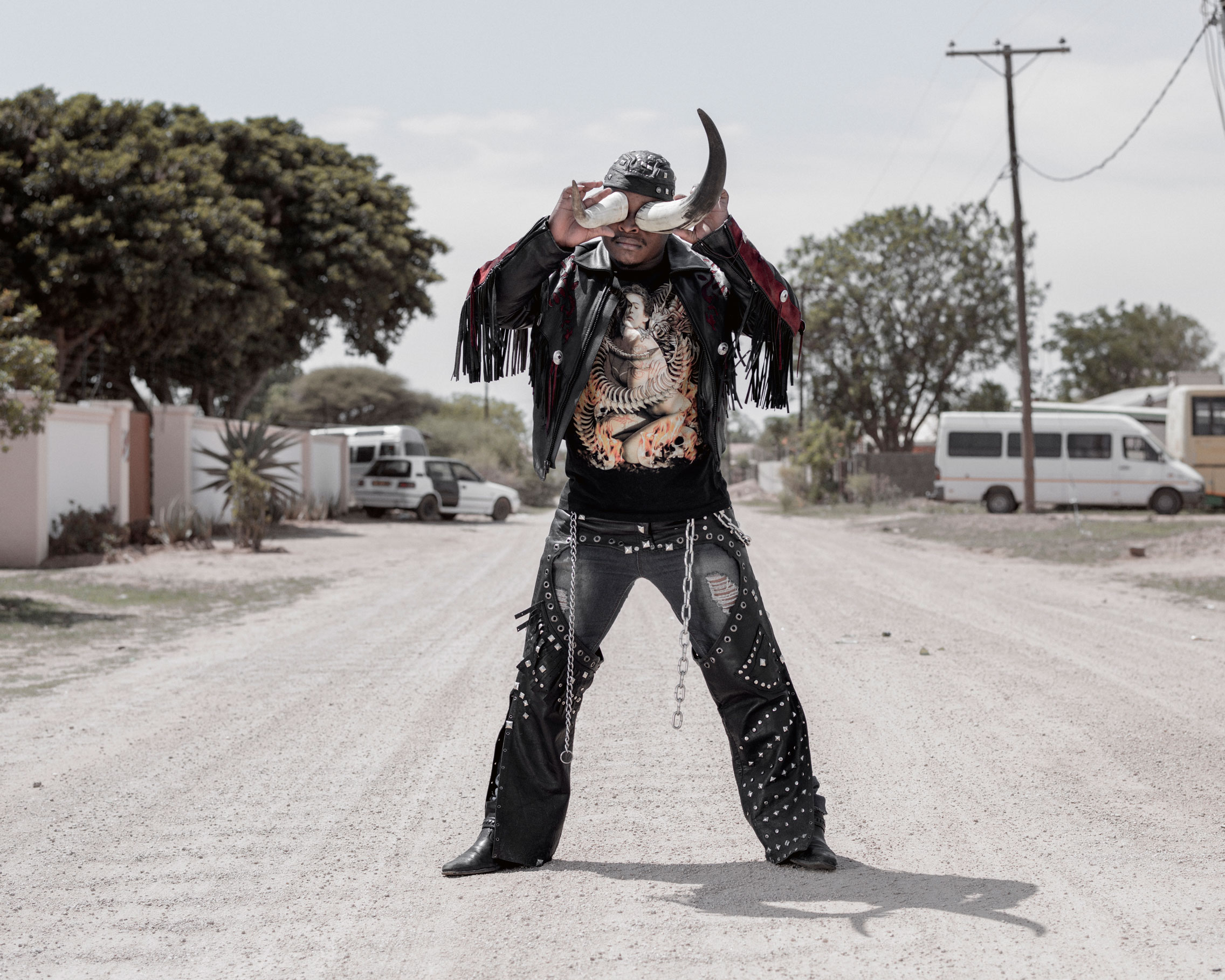 Cybok, a 27-year-old security guard who began listening to metal in 2008.

Even a cursory listen to bands like Overthrust (perhaps Botswana’s most famous alternative band), Rokara, Evergreen, Dust N Fire and Remuda reveals a serious culture clash: the unapologetic sound of appropriation and reclamation. It’s not explicitly for listening but, like the best of metal, it’s a sight to behold.

The movement isn’t just made up of bands, though. Bikers, cowboys and motley crews of female punks – not to mention every other weirdo or outcast driven underground by the “benign dictatorship” of President Khama – has found some kind of home in the scene. And yet, the music isn’t selling. Not because people don’t love it. Most just can’t afford it. 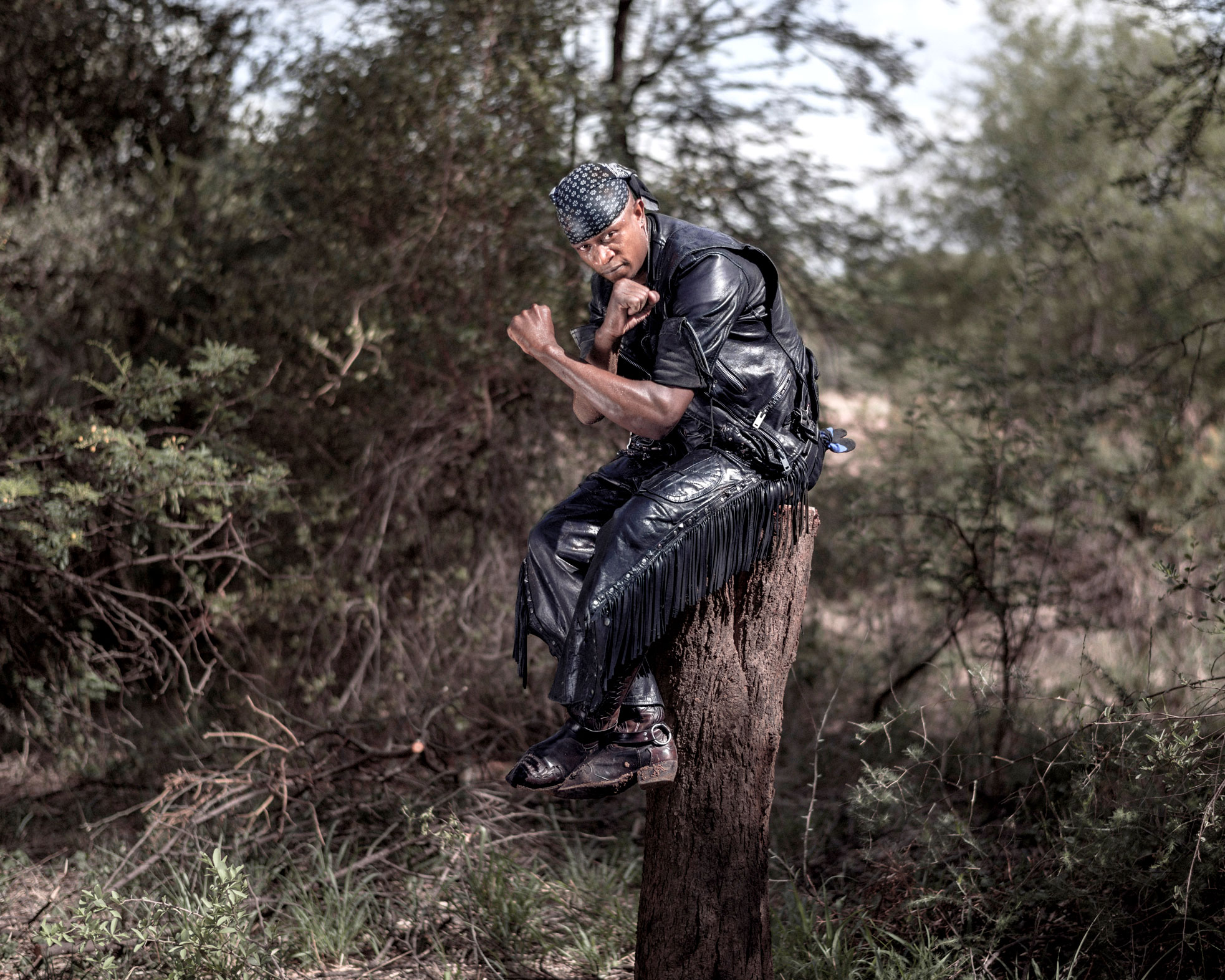 ‘Night Crawler’, 32, became a ‘hellbanger’ after his uncle, a metal fanatic, died in a motorbike accident. “I wanted to be like him and that’s how I became a rocker.”

Although Botswana is diamond-rich, and the children of its elite study overseas through the State’s bursary scheme, most of its two-million-plus citizens are trying to survive on less than €100 a month. Botswana’s currency usually fares stronger than that of its neighbours, but its economy (as with the entire lower half of the continent) is largely reliant on South Africa.

Middle-class Batswana who find employment there tend to send monthly sustenance (or ‘black tax’) back home. That does not leave much room for music buying. The sounds that do sell – the stuff that fills the airwaves and supermarket shelves – is either Motswako (a Southern African genre of hip hop) or soppy R&B.

Tough as things may be, the scene has shown some seriously impressive perseverance. Humour is part of it, too. After weeks of struggling to get hold of musicians to interview – constantly told that most are on tour – one of them finally gets hold of me.

“Mate, look…” he begins. “In Botswana, there’s no such thing as ‘touring’. You get invited to a show, often nonpaying. You do your thang and then get back to the daily mundanities of your life.” 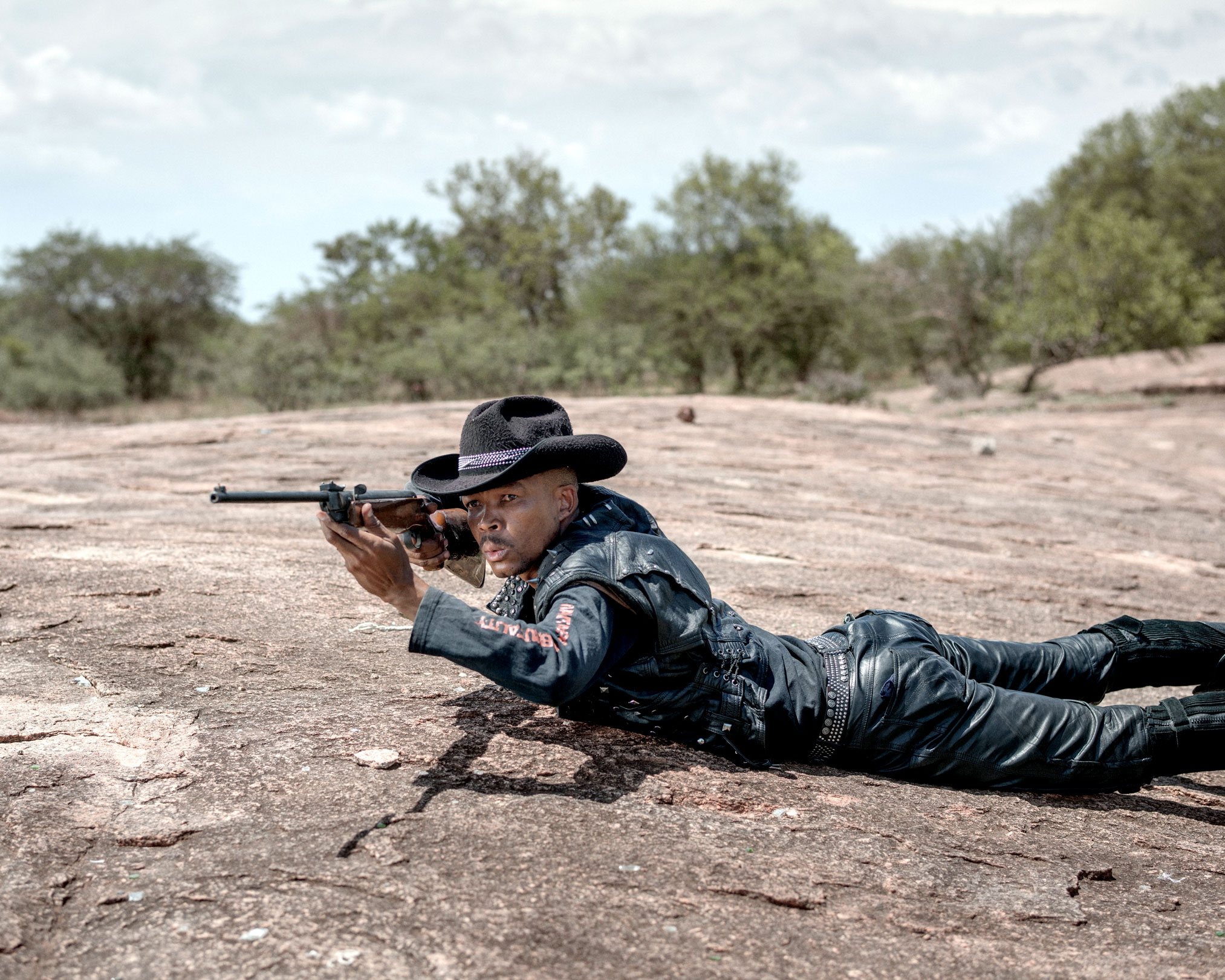 ‘Rams’, a 38-year-old cowboy whose favourite band is Overthrust.

Many bands come up quickly: some genuinely spurred on by the wider interest, others clearly trying to cash in. And because there’s so little money to make either way, many fold up just as quick. “Most of us just cannot afford the instruments, so we play on cheap shit,” says Dumisani. “But we have been surviving on the music’s DIY culture for as long we can remember.”

Still, they soldier on – epitomising the spirit of renegade culture. Although the hype and curiosity is hardly enough to get them bookings on the international circuit, it does bring one advantage: catalysing the international revival of scholarship, fashion trends and media coverage around rock’s African roots and routes. 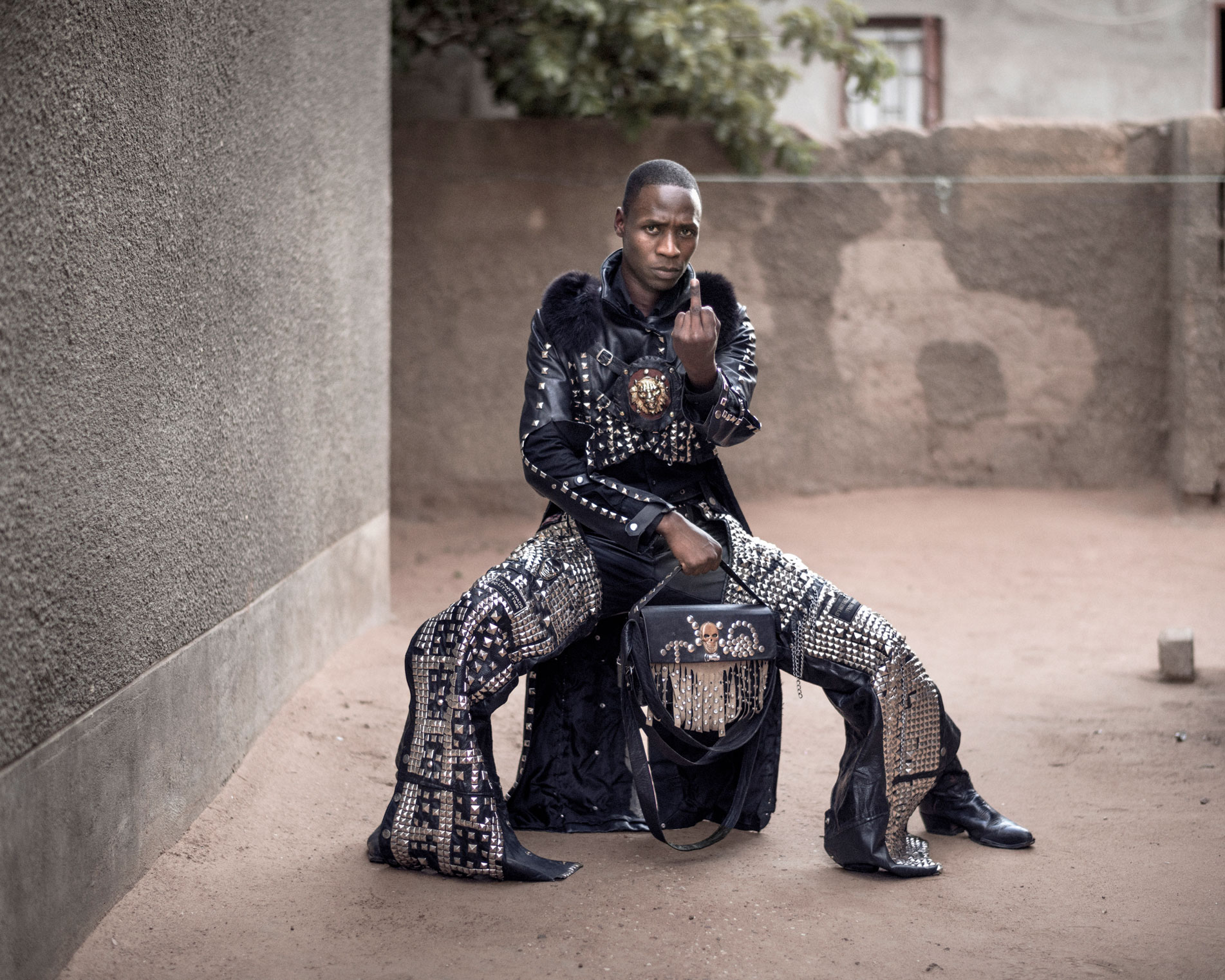 ‘Desert Super Power’, a 26-year-old electrician, designs clothes for many of his peers in Botswana’s metal scene.

Batswana metal rockers, with their resolute un-sellability and DIY approach, aren’t exactly primed to take advantage of that opportunity. But perhaps they don’t need to be.

Every year, a festival called Winter Metal Mania hosts the very best and worst of Botswana’s metal scene. It’s right in the middle of the fabled Kgalagadi (better known as the Kalahari Desert) – home to Africa’s oldest and most resolute inhabitants, the San.

There couldn’t be a better place for its die-hard fans to congregate. After all, long before metal became a billion-dollar commodity, it was a form of defiance: a sonic middle-finger to the status-quo. So what could be a better fuck-you than staying true to that – ploughing on independently, immune to interference? 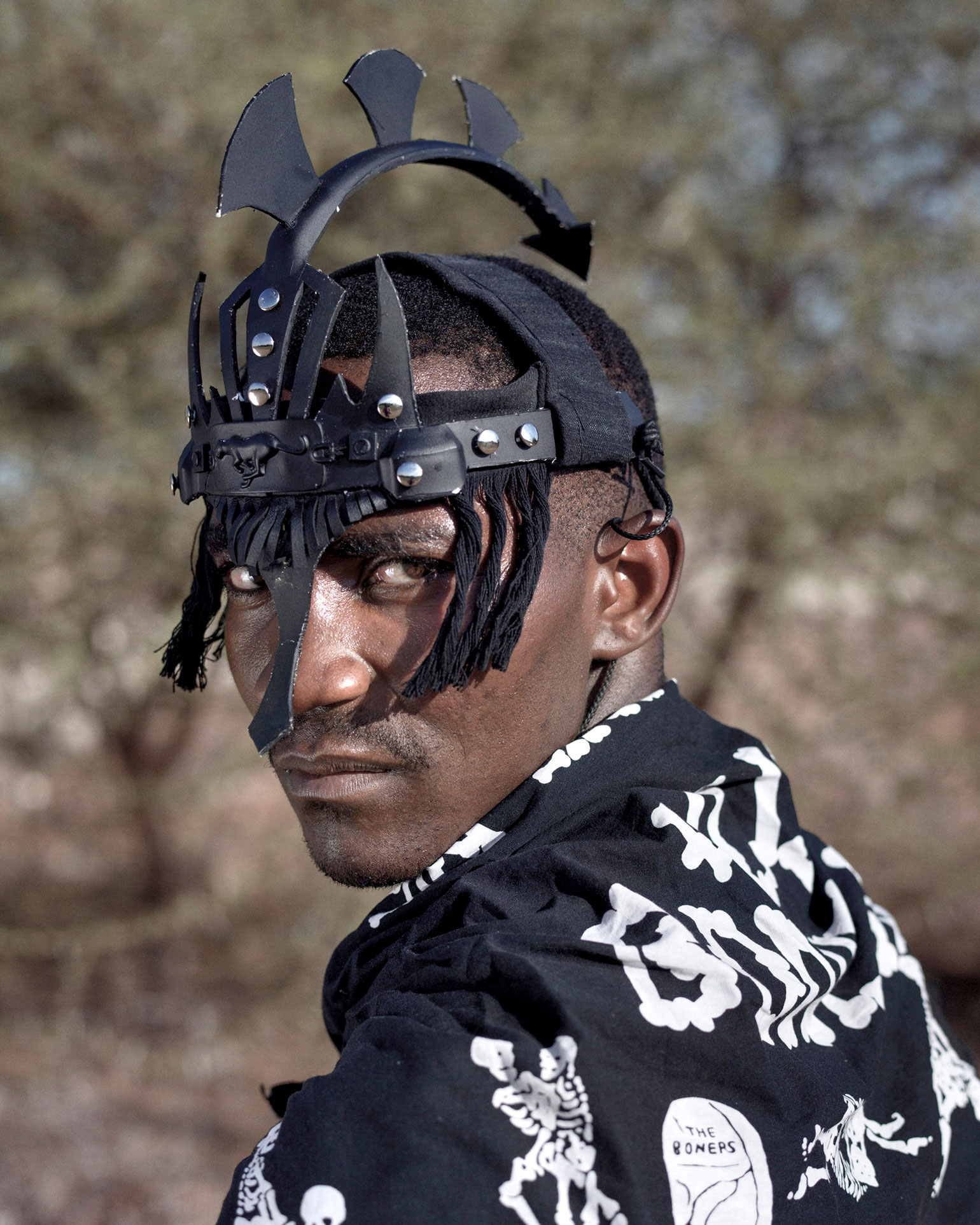 ‘Hardcore Series’, a 26-year-old graphic designer who began listening to metal in 2005.

“This is an identity for me,” says Shalton ‘Spencer’ Monnawadikgang, guitarist for Overthrust, who’s 32 and works in hotel administration. “People in the community have become more understanding and respectful of what we do, though there are still some misperceptions that linger on. But, to tell you the truth, that’s just not important.

“This is the life that I chose. The feel of the leather, the rattling sound of the guitar – that’s who I am… and no one tells me how to do it.”

Bongani Madondo is a rock theorist and cultural critic. His most recent book, Sigh, the Beloved Country: Braai Talk, Rock ‘n’ Roll and Other Stories is published by Picador Africa.

Linkedin
RELATED ARTICLES
OTHER ARTICLES
The revered showbiz chronicler recalls his journalistic beginnings, documenting subcultural scraps in the ’80s.
Following the release of his newly republished 1991 book, Redheads, the American photographer reflects on his celebration of ginger people and their magnetic power.
Our new magazine is here, starring the inimitable Mitski. Order your copy now and join us on a trip around the world.
Photographer Robin Graubard’s debut book offers an unflinching record of turbulence and change across the Balkans.
The failure to hold landlords to account is denying tenants their basic dignity, writes Bella Saltiel.
The situation in Afghanistan remains dire, with many groups facing persecution at the hands of the Taliban.