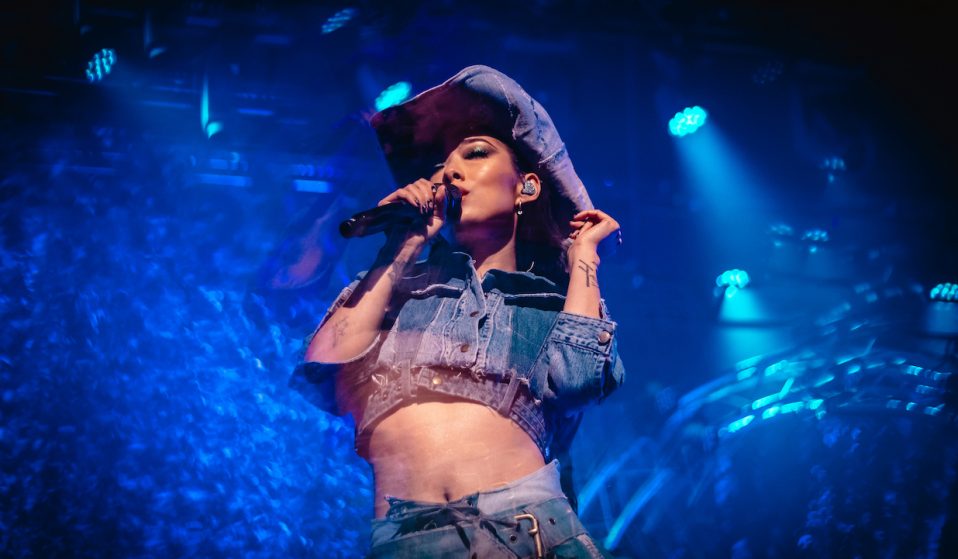 With the singer’s tour in full swing, we sat down the musical production company who made the electrifying show possible.

With the singer’s tour in full swing, we sat down the musical production company who made the electrifying show possible.

It’s sweltering inside Brixton academy. The kind of heat that sends rivulets of sweat running down the length of your spine and fogs up your phone camera. On stage, Rina Sawayama is feeling it too. “It’s so hot in here!” she exclaims before launching into another banger. This homecoming show has been eagerly awaited by her fans since the release of her album, Hold the Girl and did not disappoint.

Sawayama’s second studio album speaks to a world on fire and the anxiety of trying to navigate it – apt traffic for a stage drenched with the sweat of several thousand homosexuals who packed out the academy. The album sees the 32-year-old singer work through themes of love, loss, belonging and identity in characteristic camp glory. The stage show reflects this, with its high drama lasers sketching out patterns in smoke and Rina flanked by banking dancers manoeuvring across the split level stage to the adoration of the crowd. Chants of ‘Rina!’ echo out between songs as Sawayama changes in and out of costumes, clad in leather one moment and, seemingly in the blink of an eye, reappearing from off-stage in flowing fabric that dances out behind her with the help of an unseen fan. 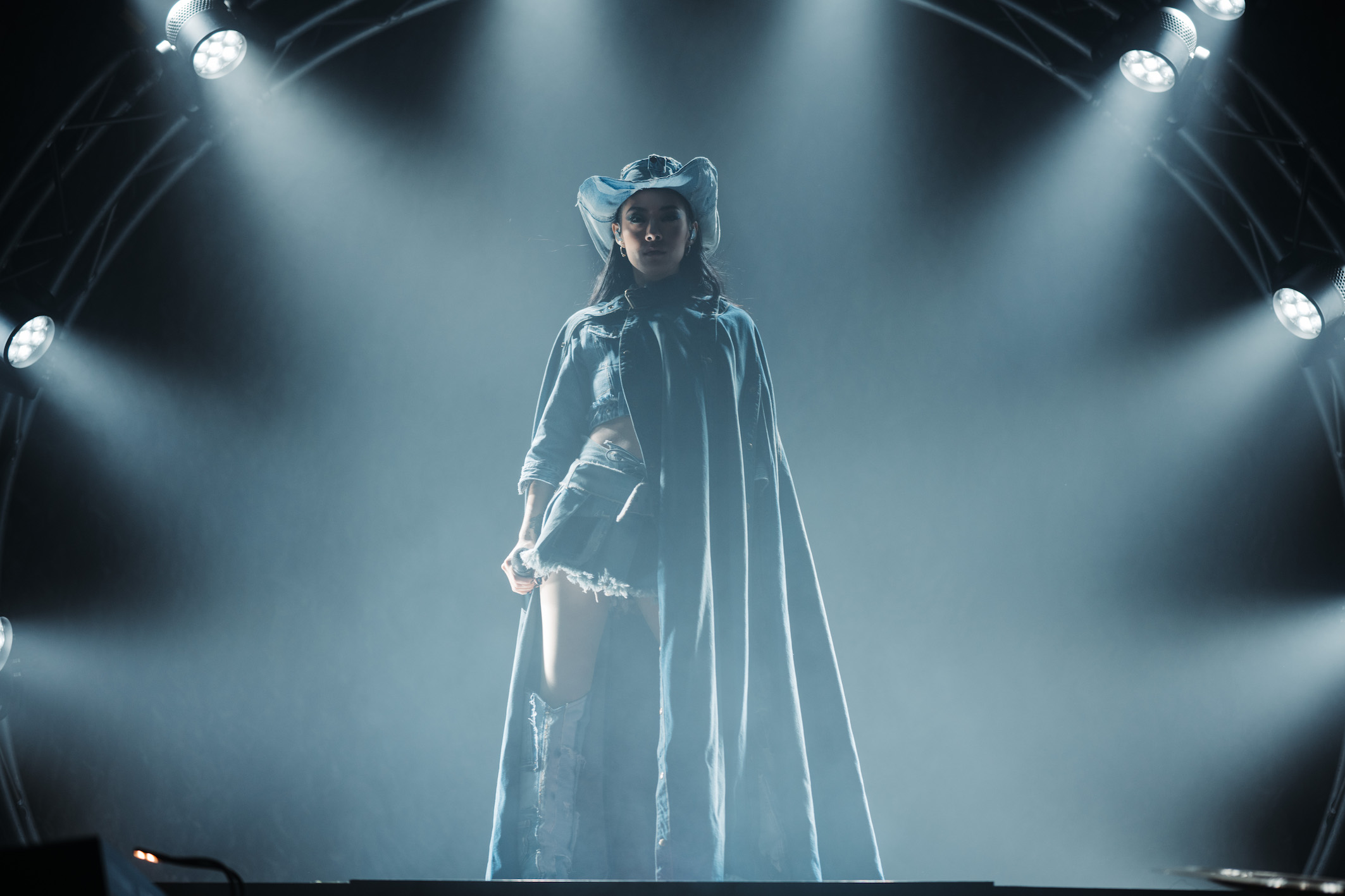 The driving force of the record is undoubtedly pop but listen closely and you’ll hear the kind of frenetic drums that came to characterise the pop-punk movement or the pairing of heavy guitar riffs with vocal crescendos running through it. It’s these references that serve as much of the foundation for the musicality of the show, alongside nods to nu-metal, jungle, hardcore and more.

Watching the show, feeling the force of the guitars hit the crowd, or breathing in the sounds of silence after a stripped back crescendo, I often found myself wondering how it came to be. How the language of the record was translated and elevated into a full stage production.

For Hold the Girl, that was the job of music direction company WFB Live, who worked as the musical director on the tour, alongside Rina and her creative director Cristalline, to realise Sawayama’s vision for the show. I sat down with WFB Live co-founder William Bowerman the morning after to talk through the collaboration, and building Rina’s world. 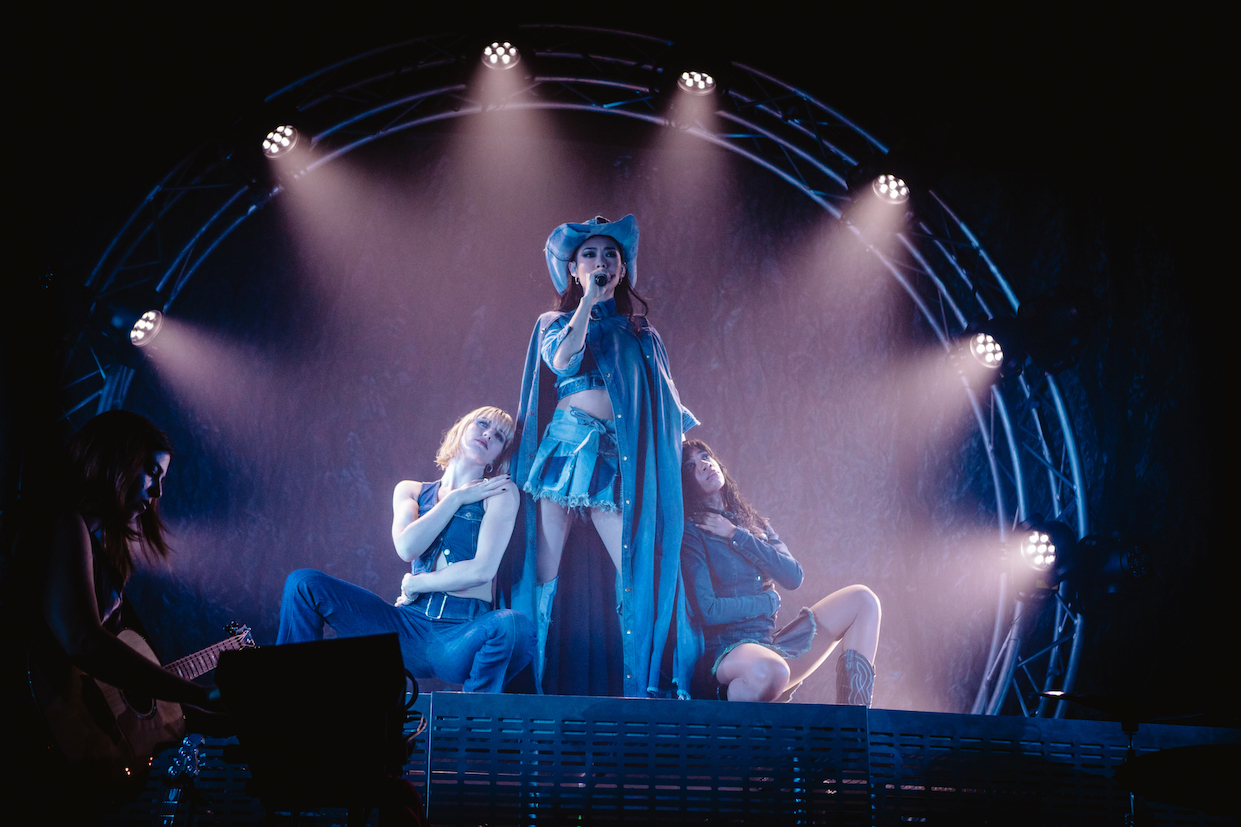 How did you come to work with Rina on this tour?

So a good few years ago WFB Live were approached by Rina’s label at the start of her career but at the time we weren’t around to work together. Then the first album came out, we heard it, saw what she was doing and we were gutted. Move forward to this year, I was at [Radio 1’s] Big Weekend and I bumped into Rina’s tour manager who asked if we would be interested this time around.

We knew we wanted to do it anyway but as soon as we heard the album we were like, ‘we have to be involved in this!’ It was clear how much of an ambitious project it was by the record that Rina had made. And we just knew that as far as creating something for the tour had to be equally ambitious.

I think you achieved that with so many of the musical influences and decisions in the show, how did you arrive at them?

The thing that we love about Rina’s music aside from the songwriting itself is the production. She has a very good way of jumping between genres very quickly, you know, there’ll be country and suddenly, it’ll sound like Justin Timberlake and then it’ll be nu metal. It works because she’s the glue that kind of holds that together. For the show we wanted to reflect that so there’s a huge number of influences in there.

We took Underground Resistance’s classic techno track ‘Transition’ and made it acappella so it felt like there was a preacher on the front of the stage and then we sampled the Streets and Korn and some real weird, strange references. We got really deep into Nine Inch Nails and industrial stuff. We pulled all these together and presented them to Rina and it was a very collaborative process, widening everyone’s horizons, so many creative tangents where no idea was a bad idea, just throwing bands and songs out. It was a really joyous experience. 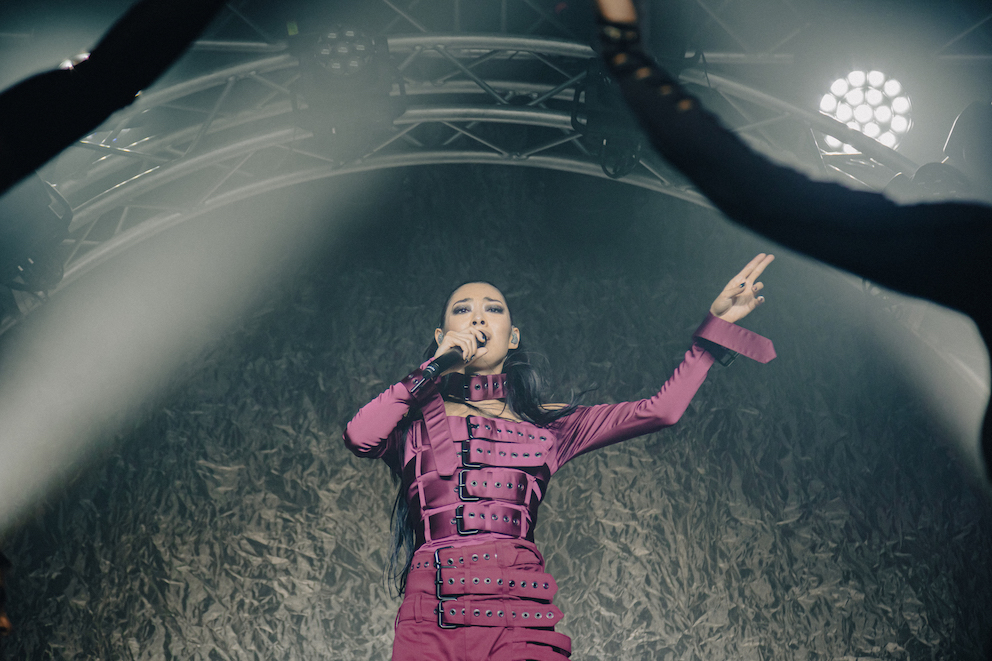 And in terms of that collaborative process, break it down for me a little – how did it work?

Rina came to us with a setlist and a show idea. She was like, ‘I think we should start on this and go to this and go to this’. And she presented the whole thing in a deck. From the beginning she knew exactly what she wanted, how she wanted to dance, when she wanted to move, she was really the driving force of the vision, so for us the job was to help her realise that. To soundtrack it and enhance it.

So we went away with her ideas and did that big brainstorm and made an Mp3 of what we thought the show would be. Then it was a case of going back and forth until it was in a place where we’re all happy and it’s signed off. From there it was into the rehearsal room and we worked with the band for weeks and weeks until it was drilled into them and then Rina came in. When it comes to working with her, it was pushing her to be even better than she is, making sure she’s comfortable on stage, that everything feels right and the music fits the overall language of the show.

So I wanted to ask about this: at the show, the way the lights and music worked in tandem was almost like a synesthesiac experience. How did it all come together?

It all starts with a brief from Rina and her creative director. Everyone receives it and gets to work. If the creative director and the artist are good, like they are in this case, everyone understands everyone. Everyone gets the assignment!

It’s always music first, so as soon as the mp3 of the show exists, everyone gets sent it and gets off to work, basically. So it’s quite a lot of pressure to get that to get that right. A lot of our work is the very beginning part, even before rehearsals. Then, once we’re in them you’ll get questions from other departments – ‘Oh we have this great idea we could do with XY and Z to happen at this point’ – can we look at that? and then you collaborate to make sure that what you do musically enhances the idea. But music always comes first. It’s a concert after all! 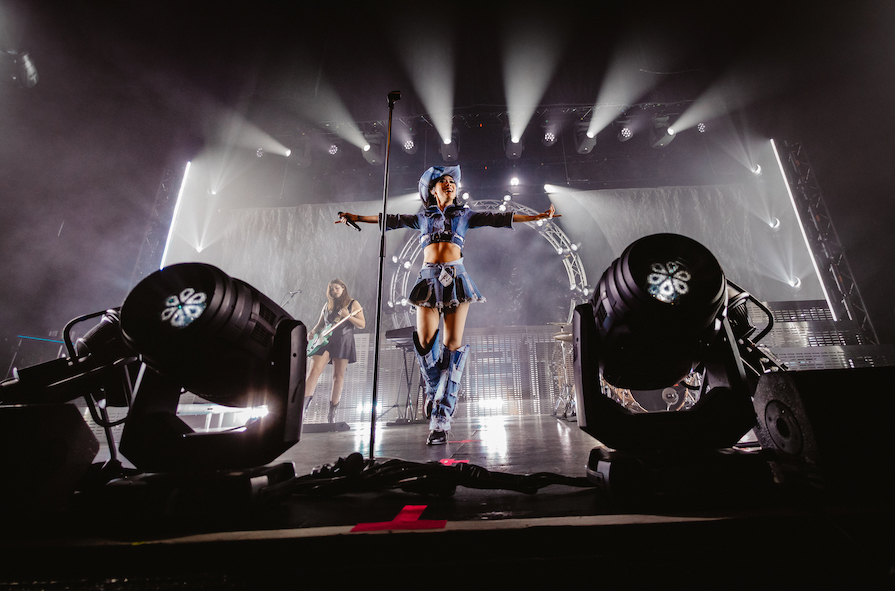 When it finally all comes together after months, what’s it like watching it on stage in front of a crowd for the first time?

I used to be a session musician for many years of my career. First night, it’s easy, you go on stage, you’re in control, you can play well, you can do whatever. Being front of house and watching the show is 20 times scarier, because you have no control at that point. You’ve done everything, it’s in the hands of everybody else. And you’ve just got to sit back and hope that it all works. Usually, honestly, first night, you’re worried about really boring technical things – is the playback system going to work? Are the guitar patches working? Then when it’s starting to work and work, you start to feel pride. For me, it’s pride seeing the artists up there. And everyone’s smiling, we were talking about seeing the crowd, having a great time, seeing the artists being absolutely amazing up there, and just, you know, their journey of making this record and pouring their heart and soul into songs, you have such a delicate job to be able to deliver that.

There’s an added element of excitement in seeing whether people get your creative journey. Whether they appreciate the creative expansion we’ve tried to add. I like to think that people come to the show expecting the record, or expecting a pretty standard pop show and I just hope it opens people’s minds. I want them to walk away and be like, it was just different. It immersed me. It’s our job to bring people to Rina’s world. To the Hold the Girl world that she’s created. I hope we did that and enhanced it.

Linkedin
OTHER ARTICLES
Jack Lueders-Booth reflects on capturing the community that lived and worked along the city’s busiest railway route during the 1980s.
The photographer describes taking inspiration from Magnum photographers to craft an intimate and revealing portrait of the city.
The demonstration took place this week over plans to slash £50m from arts bodies in London.
A new documentary tells the story of an unassuming cul-de-sac of 13 timber framed houses built by Fusions Jameen – London's first Black housing co-op.
Photographer Nico Froehlich’s series documents South London’s diverse communities, while also reflecting on their fragility amid rapid gentrification.
Recent research is highlighting the drug’s enormous potential for treating substance abuse.