Art & Culture / How the energy crisis is affecting grassroots venues 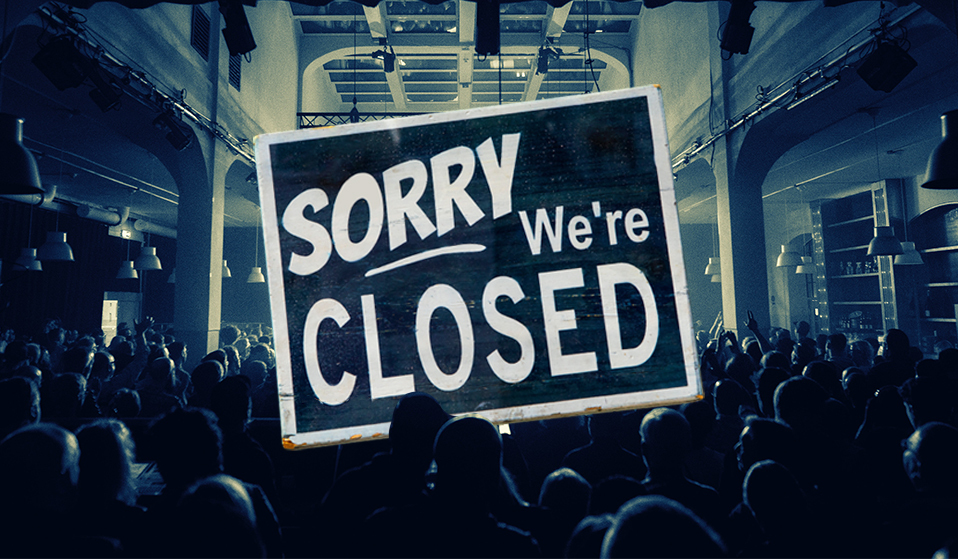 As the cost of living crisis continues to bite, Emma Garland examines the effect it's having on cultural institutions across the UK.

As the cost of living crisis continues to bite, Emma Garland examines the effect it's having on cultural institutions across the UK.

“It’s been a perfect storm of things going terribly,” Stuart Cameron tells me over the phone, breaking into a laugh of near-disbelief.

Cameron runs The Booking Hall in Dover – an independent, grassroots music and arts venue inside the town’s old Harbour railway station, which once offered direct access to the port and served as a morgue during World War Two. When the venue first opened its doors in 2017, it quickly came into its own. They put on a broad range of events while catering to “underserved” alternative music fans, championed local talent in support slots for larger touring acts, and arranged dedicated nights for local musicians to play without a venue hire fee, enabling them to pocket the door money – all things Cameron believes are “fundamentally important” to supporting the industry at a community level. “What you put in, you get back,” he says. When the pandemic hit, though, The Booking Hall fell through the cracks.

Because the business was registered as a sole trader, it wasn’t eligible for any grants or funding from organisations like Arts Council England or the National Lottery, which helped keep some venues afloat in lieu of government support. “I’m The Booking Hall, and The Booking Hall is me,” Cameron explains. “I effectively sat there losing money, month after month.”

Despite mounting financial pressures, The Booking Hall was able to re-open in July 2021 and has since enjoyed its “best operational year” to date, thanks to the support of the local community. As a result, they’ve been able to pay back their pandemic debt and also re-invest in the venue. Now, the cost of living crisis has put the gear in reverse. It’s a situation Cameron likens to jumping “out of one fire and into another”.

The most immediate issue is energy prices. Media attention has mostly focussed on domestic households, with another 1.3 million people predicted to slide into poverty even if the price cap is held at the current rate. Meanwhile, small businesses are experiencing an emergency of their own. Facing much higher bills, everything from corner shops to cafés are at risk of closure without intervention. Then, there’s the live music industry, whose outlook is somehow worse. Considered to be a “risky sector” for various reasons – including, in this case, the sheer amount of energy it uses – live music venues are often quoted higher energy rates to offset the risk of them going under. As Music Venue Trust CEO Mark Davyd explains, this has trapped them in a vicious cycle. Energy bills were already so high that they presented a risk of closure. That precariousness, in turn, has driven quotes up even more. One venue was quoted an average of 48p per kWh (kilowatt hour) last month. Last week, the quote had risen to £1.48p per kWh, turning their typical £22,000 per year energy bill into £122,000.

On September 21, the government announced an energy bill relief scheme to help alleviate pressures on businesses, charities and public sector organisations for the next six months. The scheme has tentatively been embraced by the entertainment and nightlife industries, with MVT believing the proposed base unit rate (21.1p per kWh) would be “sufficient to avert the collapse of the sector” in the immediate short-term.

We await full details of the scheme and the method of implementation by the energy retailers and suppliers, but the base unit rate of 21.1p per kW/h laid out by these plans is sufficient to avert the collapse of the sector if it is fully delivered.

For some, the announcement came too little too late. At the start of September, MVT was in touch with one grassroots venue that had received a quote of £144,000 per year – up from £10,000. Not one other energy provider would even give them a quote. They had no choice but to hand the keys back to the landlord and shut down for the foreseeable. Exact details of the relief scheme are still forthcoming, so in the meantime, most venues are holding on to see what October will bring. One thing Davyd does stress, though, is that “if support doesn’t continue after six months, all we’ve done is delay the problem.”

“I’m finding that being closed through Covid was actually a lot easier than what we’re having to deal with now,” says Jordan McGuire, who runs The Bunkhouse in Swansea. “Through Covid, we had support with government grants and so on, but now it seems like music venues have just been forgotten about.”

Since the start of the pandemic, The Bunkhouse has seen their energy bills go up by roughly 70 per cent – a lot less than some of the horror stories that have caught headlines so far, but still extremely high. “We’re paying more for electricity than we are for rent on a property in the centre of the second biggest city in Wales,” McGuire tells me. “It’s madness.”

Both The Booking Hall and The Bunkhouse are trialling drastic measures in an attempt to cut costs. The Bunkhouse has even been turning off the cellar cooling on one of their two bars to try to limit electricity usage. The problem is, it’s not just that overheads have gone up – it’s that punters have less to spend. The energy crisis is one part of a much larger cost of living crisis, which is driving turnover down at the exact time that everything from the lights to the cost of beer is on the rise. “To come out of a pandemic and into a cost of living crisis and expect people to come to your venue and spend as much money as they were before, it’s just not feasible,” says Cameron. “It’s not as simple as whacking up the ticket prices or the beer prices by a couple of quid, because people don’t have that money to spend.”

In the context of widespread economic turmoil, a short-term relief scheme may help to keep the lights on – for now –  but it won’t touch the sides of the issues faced by the music industry long-term. According to Music Venue Trust, two-thirds of grassroots venues don’t make a profit. Over a quarter of the sector is legally registered as not-for-profit, and venue operators work on average 66 hours a week on an average salary of £20,500 (below minimum wage).

The effects of tightening the belt are already rippling out across grassroots venues, many of whom are taking fewer risks than they would ordinarily. Everyone is proceeding with caution. The Bunkhouse is slightly reducing the number of gigs they’re able to put on, and The Booking Hall is trialling various cost-saving exercises to be able to operate as normal. There is a feeling of uncertainty that has not been alleviated by the government’s relief scheme, which failed to mention live music venues explicitly (though MVT is confident they will benefit from the same support being extended to pubs).

“It gives people like us anxiety, not knowing what’s around the corner,” says McGuire. “We struggled through [the pandemic] because we had to. We’re too stubborn to close the doors, and we were trying to think about the hole we would create in the music community in Swansea if we weren’t there. Things have been getting better, but with the cost of living we don’t know how long that’s going to go on for.”

At the same time, he seems happy enough to be powering through. “Well, I have the drive to keep it going, so I’m just going to wing it if anything!” he laughs, when I ask if he’s feeling optimistic. Cameron agrees. “This is by far the worst paying job I’ve ever had,” he chuckles. “It’s a complete labour of love, and although numbers have been slightly down over the last months the support from the local community here in Kent is still strong, which is the most reassuring aspect of all.”

Going forward, Cameron would like to see better communication from the government that factors live music venues into its policies using clear terminology. “Grassroots music venues obviously aren’t at the front of their agenda, and that’s fine,” he says, “but if they’re trying to support small businesses, they need to make sure they’re including all small businesses, rather than just particular sectors.”

McGuire would also like to see the introduction of a safety net that allows independently run venues to operate with some degree of confidence. Just “a bit of commitment from the government towards culture and arts” that acknowledges the cultural and financial value of grassroots venues.

“Every single artist that everybody listens to started out by playing in grassroots venues,” says McGuire. “We see so many bands who come through our doors and they’ve all got the same chance as each other to make it big, and grassroots venues are the first step of that success. Without them, where is anyone supposed to start?”

“The music industry is a massive export for the UK,” he adds. “I’m praying that one day a government will see it as something worth injecting money back into.”

Linkedin
OTHER ARTICLES
Layna, Maysa and Amaya are three siblings looking to disrupt narratives around the sport. In doing so, they’re hoping to inspire a new generation of skateboarders.
Ireland’s national sports are modernising. At the forefront of this movement is Na Gaeil Aeracha, the country’s first ever queer GAA club.
Through stills, anecdotes and film criticism, a new book examines the portrayal of women’s destructive emotions, reframing it as a challenge to patriarchal structures.
Recent research is highlighting the drug’s enormous potential for treating substance abuse.
Jack Lueders-Booth reflects on capturing the community that lived and worked along the city’s busiest railway route during the 1980s.
Max Miechowski reflects on documenting land that is being lost to the sea – and the people who live life on the edge.